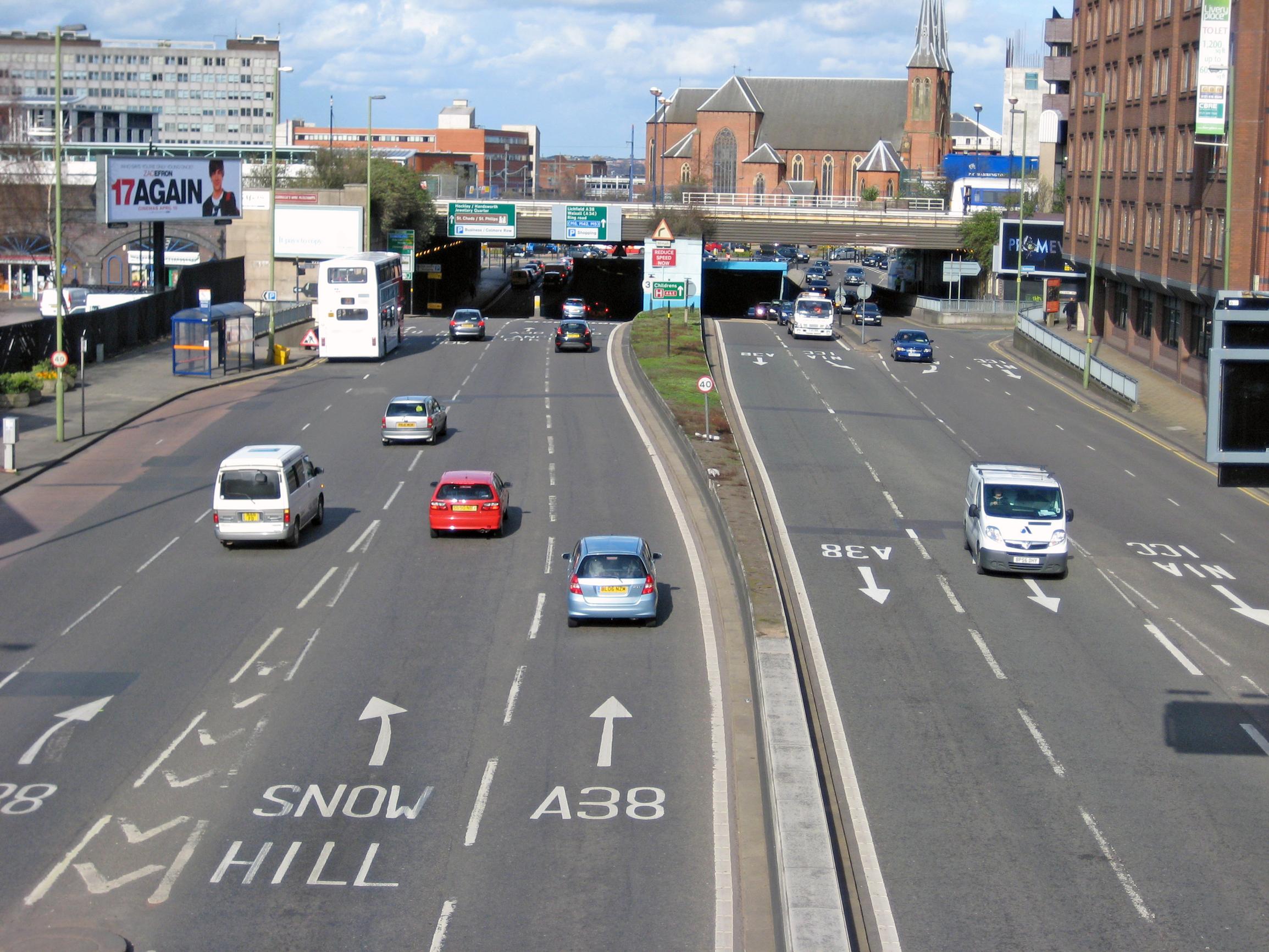 Birmingham City Council is proposing to close the A38 road that skirts the city centre to through traffic, in one of its most ambitious actions yet to reverse  the roads policy of the 1950s and 60s. A workplace parking levy is also being explored.

The A38 connects the Aston Expressway and M6 in the northeast of the city with the Bristol Road in the southwest, and skirts the north and west of the city centre. Much of it is in tunnel.

The city centre section formed part of the city’s Inner Ring Road (IRR) that was built between 1957 and 1971. Other sections of the IRR have been removed or downgraded since the late 1980s.

The idea of closing the A38 to through traffic features in a draft transport plan being launched for consultation next week.

“Different options for the central section of the A38 will be considered,” it says. “This might include re-routing it to an upgraded ring road, meaning that vehicles on journeys passing through the centre of Birmingham would be kept clear of the city centre.”

The document does not explain how the ring road, the A4540, would be upgraded, nor explain whether the ring road would have to be improved before changes are made to the A38.

The council may have been emboldened by the experiences of two lengthy closures to the A38 St Chad’s and Queensway tunnels for refurbishment in the summers of 2013 and 2014.

A 2015 council masterplan for the Snow Hill district of the city centre described the A38 as an “urban motorway” that acted as a barrier between Snow Hill and  land to the north.

The masterplan envisaged turning the road between Lancaster Circus and Paradise Circus into a “series of attractive boulevards and public spaces, leaving the road to function as a local distributor rather than a through route and urban motorway”.

The masterplan said there was also an opportunity to transform  Lancaster Circus, where the A38 enters the city centre from the north, into ‘Lancaster Place’ with “the potential removal of the gyratory and A38 flyover creating opportunities for new development sites and open space” (LTT 20 Mar 15).

Waseem Zaffar, Birmingham’s cabinet member for transport and environment, said last week: “As a city, we have been over-reliant on private cars for too long. Birmingham has already started to redress the balance and build a future in which the car will no longer be king.”

The draft transport plan proposes reducing city centre car parking, with up to 12,800 new homes being built on land currently used for council-owned car parks. A workplace parking levy is also listed as a possible policy for implementation.

The proposals come on top of the plan to introduce a Class D charging clean air zone this summer, which will see cars and other vehicles pay a charge if they don’t comply with the CAZ vehicle emission standards.

Councils officers believe the draft transport plan will be popular with city residents. A risk register says there is only a “low likelihood” that the plan will not be supported by communities and stakeholders.

Paul Biggs, the Alliance of British Drivers’ West Midlands spokesman, said: “Birmingham’s war on the private car has been massively ramped up with these latest plans, which threaten to sever the vital A38 arterial route and cause hardship to a great many people.

“Restricting transport choice and routes is an act of pure spite.”