Hope is not enough at COP26: clear planning for urban futures is needed now

Martina Juvara will be at COP26 representing the International Society of City and Regional Planners. Global leaders and influential organisations must set out a plan for urban change in advance of technological innovations, she says 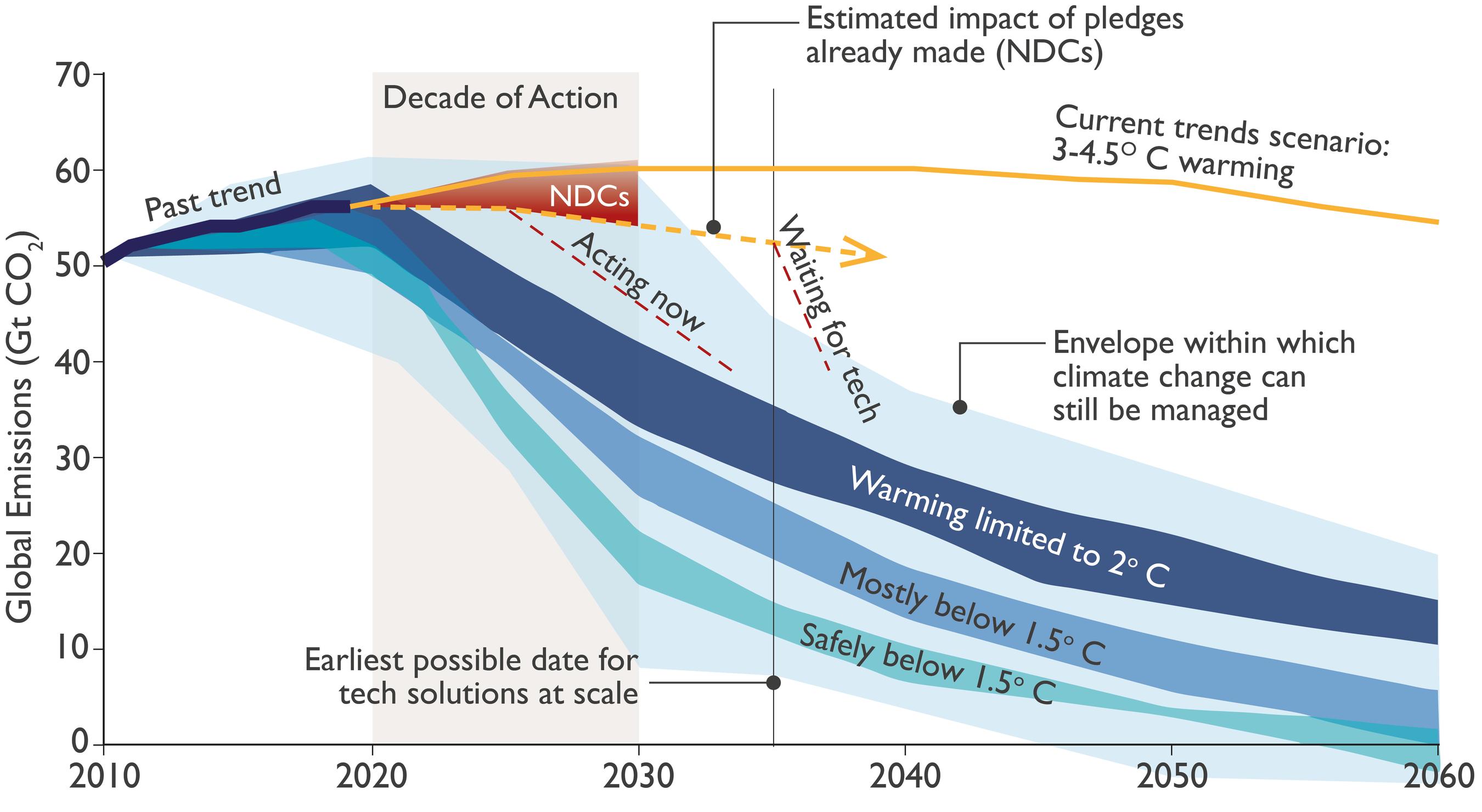 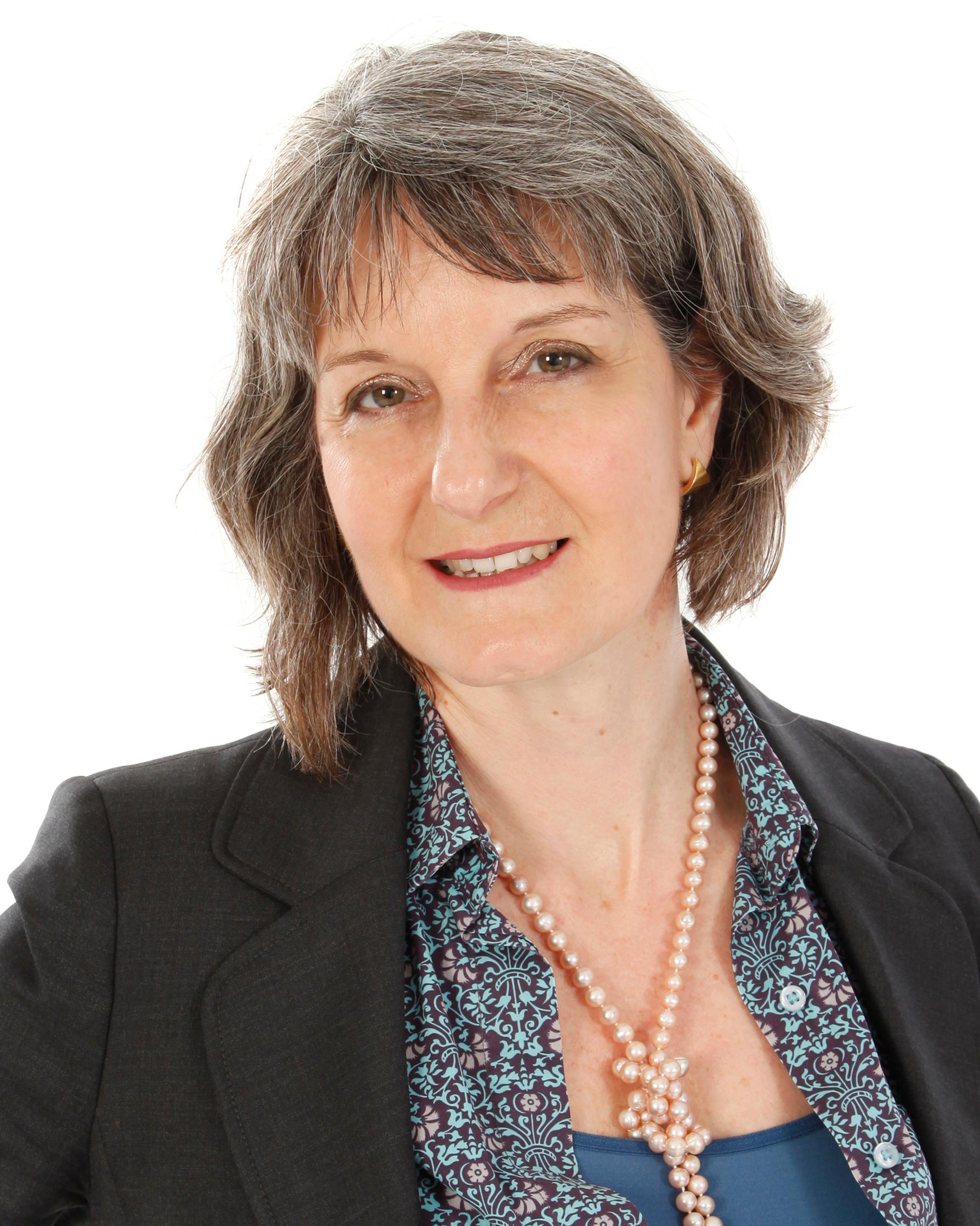 Ahead of my trip to the COP26 climate change summit in Glasgow, I have been reading the official papers of the summit. These are not for the faint hearted. On one hand, they are a blackhole of bureaucracy: interminable preambles and pages of semi-legal text, acronym feasts, and carefully balanced conclusions, which must be read multiple-times to understand the point they are trying to make.

One or two papers, however, included brilliant graphs such as the one pictured right. If, like me, you appreciate graphs, your heart will sink for another reason: climate anxiety! The graph’s yellow line shows our current trend at global scale: emissions levelling off but warming nevertheless projected to reach 3.5 to 4.0°C. This will lead to the catastrophe everyone agrees must be avoided: sea level rise equivalent to the height of a block of flats, entire coastal areas (and some nations) disappearing into the sea, mass migrations, food shortages, and more.

The red triangle shows the impact of the NDCs (a favourite acronym: Nationally Determined Contributions – i.e. the pledges each country was required to make by December 2020 according to the Paris Agreement). These show a clear inversion of the curve, but not enough to keep warming within the overall safe envelope. This means that, whatever we proposed we must achieve at all costs, and even if the UK has been more ambitious than most, we must do more and as soon as possible.

The UK’s pledge, essentially and sensibly, proposed acting on big ticket items: decarbonising energy, reducing industrial emissions, and supporting the development of new technologies. This approach provides a feel-good factor: that we may, after all, grow our way out of the climate crisis with just a few smart moves.

Unfortunately, the graph speaks loud and clear: we have to achieve a sharp reduction in emissions in the next 10 years (the so called ‘Decade of Action’ launched by the United Nations in 2019). More action is required before all the tech has a realistic chance to make a difference. All experts agree that further delays will make the cost and effort so steep that even the richest and more resilient nations will be overwhelmed.

The challenge of cities

Human settlements are responsible for over a third of carbon emissions. Even more if consumption and waste are accounted for1. It is not difficult to see that, without action in the built environment, reductions on all other fronts will never be enough.

The problem is that cities and urban areas are complex, managed by different layers of authority and have some devolved powers. Personal and economic interests are strongly felt there – and, therefore, political will is at its weakest. Change is slow, and what we plan today will be delivered in 10 to 15 years’ time.

The UK Government is not keen to launch any big campaign of interventions within our cities and towns. Talking about future tech-solutions is politically appealing, and better than imposing change disruptive to voters’ lives and interests now. But the risk is great, and if we were to learn anything from the pandemic that must be preparedness and early action.

The UK is not alone: all developed nations from the US to Europe and Australia have been very reluctant to suggest curbing urban emissions and affecting lifestyles.

Even at COP26 the theme of cities, regions and human settlements is scheduled for the last day of talks – possibly expecting that not much will be agreed. This lack of political urgency will backfire; mobilising change at scale in cities will always be slow and if we leave it for much longer, action will need to be drastic, undemocratic, and terribly unfair.

In most experts’ views, we are well past the stage of nudging. Transformative action is needed and this can only be delivered if supported by clear political will in partnership with local authorities and the people. This requires open conversations and a consistent public message: catchy slogans, actions, clear targets and reporting on progress. Public support needs to be the foundation for rethinking planning and transport.

We are slow off the block: hoping in future solutions, technology or markets is not a plan we can afford to have

The next ten years

The IPCC2 and the UN sustainable development programmes want to see action on two fronts:

This approach counts on forthcoming innovation, but does not leave action to a future indeterminate date. It requires a rapid step change in the way we do our jobs as professionals of the built environment: new methodologies for Transport Impact Assessments based on decarbonisation targets, a clear programme of updates to the Building Regulations, made progressively more ambitious, new governance and stewardship structures to enable low carbon management and operation over time and more.

On the second front, that of Adaptation and quality of life in the face of erratic climate, we should urgently refocus spatial planning: it will be impossible to achieve 50% of walking and cycling5 without promoting local centres and diffused activity (i.e. the 15-minute city). Compact urban forms will be needed; green infrastructure will need to do a lot more than the Green Belts. It should provide biodiversity pools, carbon capture, shade and cooling, moisture regulation, breeze, flood containment, water replenishing and other vital climate control functions. Urban design will need to drive lower temperatures in public spaces.

Deprived areas should be prioritised, as poorer neighbourhoods will be more vulnerable in extreme weather. Emergency services should be boosted and plans for re-housing and mass migration events drawn up. In short, spatial planning will need to be strategic and proactive, and go beyond the simple mantra of housing, jobs and viability above all else.

Internationally, we all appreciate that the tone of the discussion has finally changed: from vague aspirations and voluntary commitments to a sense of urgency. But most planners think that this has yet to materialise as a clear drive for dealing with settlements and powerful urban forces. Urban development is still based on progressive improvement, rather than requirements based on what needs to be achieved. We are slow off the block: hoping in future solutions, technology or markets is not a plan we can afford to have.

Success at COP26 will be a global political commitment to engage society on the urgency of urban change and to prioritise action in all human settlements in advance of technological innovations. There is little that indicates this will be the case.

More achievable will be agreement to adopt a revised global carbon accounting and pricing system and new methods to capture long term values without discounting (i.e. considering the value today more important than the value tomorrow). This will lead to a new way of assessing impacts of development for all of us. It will bring change, but it will be a hard sell to the public.

I think we should do more. After all, if we were to try and make Mars habitable, would that not cost more than fixing planet Earth first?