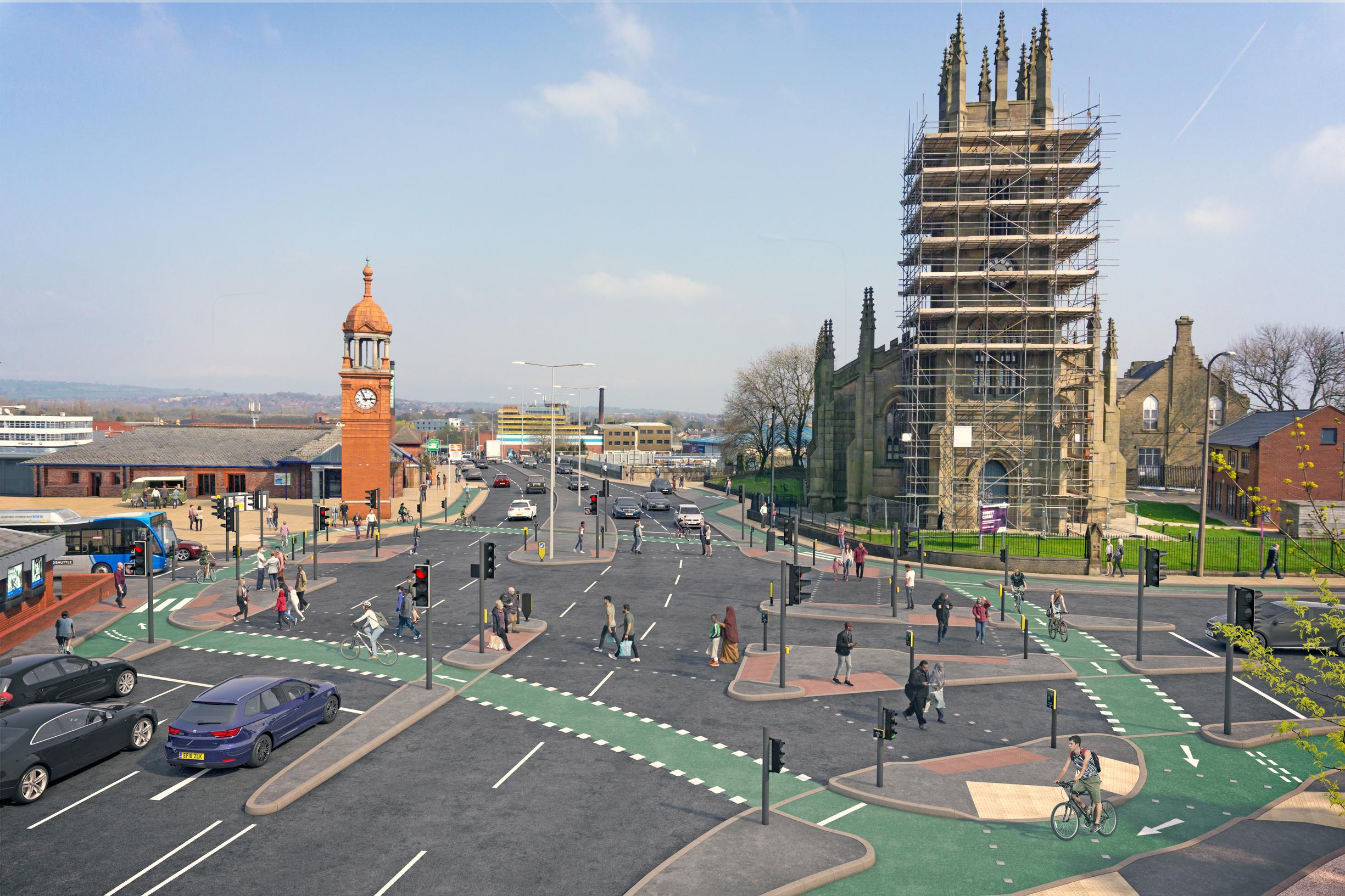 With reference to Greater Manchester Authority’s (GMA) proposal for a so-called CYCLOPS junction in Bolton (LTT 27 Sep) I have to ask: what are the benefits?

Firstly, it’s presumptious of GMA to claim it has created a universal panacea when it has not yet been tried and tested in the real world, subject to independent evaluation, and the most important test: non-compliance.  Will the people it is supposed to benefit actually use it – or will they avoid it?

We know, for a fact, that most cyclists and pedestrians ignore slow, multi-phase crossings, where they are penalised by short green times and two or three long waits at red lights. Non-compliance tends to average 70 per cent.

This looks very like a ‘continental solution’ for a roundabout, but it’s not a roundabout – it’s a crossroads. What is the point in diverting cyclists the long way around a junction, when it is so much simpler to go straight through it?

Most cyclists will re-join the carriageway and go with general traffic; pedestrians will also not wait two or three times to cross – why should they?

Neither is one size fits all a good idea. It is a classic mistake to assume your ‘solution’ is applicable everywhere. Different solutions are required for different types and sizes of junctions; this was the problem with advanced stop lines: they should never have been applied to major multi-lane roads.

Secondly, GMA asserts that Hold the Left is only ‘’moderately’’ effective when it comes to, (a) minimising delays to pedestrians and cyclists, and (b) resolving conflict – but they are quite wrong on both counts.

Hold the Left junctions give pedestrians and cyclists the same long green times as drivers e.g. 40 seconds at Oval, so now even slow walkers can cross both carriageways in a single phase, whereas other solutions impose long waits at two, three or four red lights, then only give cyclists and pedestrians a short green, which is ten seconds if you are lucky, often less, whereas drivers get 35 seconds or longer.

GMA acknowledge that Hold the Left is “good” at resolving conflicts for left and straight ahead cyclists, but not right turns. Clearly, they have not been to the A23 Lambeth Palace/York Rd junction, where Hold the Lefts now enable cyclists to make safe right turns where they were previously suicidal.

Two-stage rights, also known as jug-handled turns, have been around for years and have been applied to all types of crossings/junctions. They are not unique to Hold the Left and therefore GMA is wrong to downgrade their evaluation of HTL on that basis.

Turning right on a bike on A-roads has always been hazardous and has involved two stages. You have to pull out across multiple lanes of fast moving traffic, and then you wait in an exposed position in the middle of the road hoping for a chance to dash across. Two-stage rights are safer regardless of what type of junction they are a part of.

I suspect GMA’s ’’uncertainty’’ regarding two-stage right turns, means they have evaluated poorly designed junctions where stage two (or one) only has an advanceds stop line, so cyclists are still at risk from left hooks – this is clearly not “HTL with two-stage rights’’.

GMA then make the assertion that roundabouts – universally recognised as by far the most dangerous type of junctions for cyclists – are ‘’the ideal scenario’’!

Fig.8 shows mixed left and ahead lanes. Again, this is old thinking – this is what causes left hooks! High demand left turns can be accommodated by simply giving them longer greens.

CYCLOPS perpetuates many serious defects of bad traditional junction design. GMA’s “conclusion” fails to provide evidence to justify the “benefits”. It may be useful at small junctions (where there are less than two lanes) but at larger junctions it is a sub-prime design.

Why waste time and money dreaming up something ‘new’ when proven safe & efficient solutions can clearly be implemented in Bolton?

Hold Left Turns has just been installed at Whipps Cross junction in Waltham Forest. This eliminates left hooks and gives both cyclists and pedestrians the same long green times as drivers – ample time for walkers to cross both carriageways, directly, in a single green phase (not two or three).

Hold Left Turns are no longer new – they were proved to work well (for all modes) four years ago at the A3/A23 junction. Oval was previously a notorious blackspot where even experienced cyclists used to dismount. It’s also given Oval pedestrians time to cross both carriageways in a single green phase (no-one now waits on islands).

Unlike other ‘solutions’, HLT does not require cycle-only stages, nor ped-only stages, which take time away from drivers. Nor are driver-only stages needed, which disadvantage walkers & cyclists.

Rather than trying desperately to be innovative or original, why not just get on with implementing the latest and best UK practice?