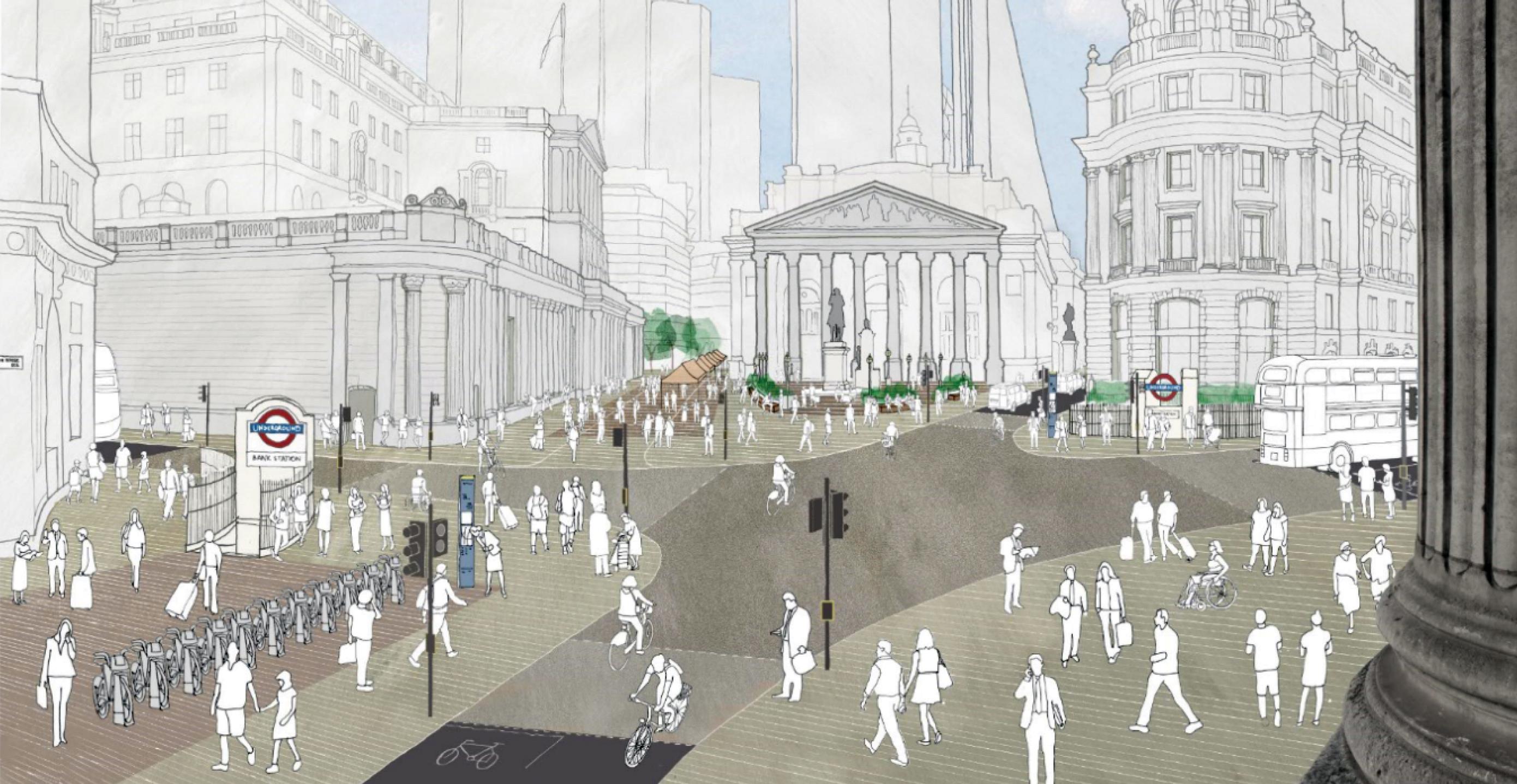 A decision on whether to pursue further traffic restrictions at Bank Junction in the City of London will be made next month.

The ‘Bank on safety’ project introduced in 2017 saw all motor vehicles except buses banned from crossing the junction between 7am and 7pm Monday to Friday. The City of London Corporation regarded this as an interim project, ahead of the more substantial ‘All change at Bank’ programme.

In January, the Corporation authorised design work to commence on the ‘All change’ scheme, with the initial aim being to deliver “semi-pedestrian priority with some vehicle movement”. This would involve closing two or three arms of the junction to motor traffic. Members also requested that complete closure of the junction to vehicular traffic should be seen as a long-term aim (LTT 01 Feb).

The objective was to deliver a scheme involving two or three road closures prior to Transport for London’s completion of the Bank Tube station upgrade in 2022.

The future of the ‘All change’ project is currently uncertain, however, as it has become caught up in the Corporation’s capital programme review. The project is one of a number with a collective capital cost of £340m that have been put on hold.

A City spokesman told LTT: “In the face of a challenging financial landscape, the City Corporation is taking steps to maintain high quality services while at the same time delivering an ambitious programme of major projects.

“The City Corporation is undertaking a fundamental review to ensure we rise to this challenge. Elected members will consider a range of proposals later this year.”

The spokesman said, however, that a decision on the Bank project could be made next week. “It is on hold, but is pending the outcome of a resolution from the streets and walkways committee to the resource allocation sub-committee on 2 May for the project to continue.”

The next stage of the ‘All change’ development work will focus on understanding which arms of Bank Junction could be closed to motor traffic.

Carolyn Dwyer, the Corporation’s director of built environment, told members that, when considering all combinations, there were 35 options. The  intention is to draw up a shortlist  of about 20. With the help of a consultant, the Corporation will conduct initial traffic modelling on these options. “The biggest consideration will be Transport for London buses, and understanding how different options would be achieved by re-routing services,” said Dwyer.

The Corporation plans to reduce the options to about five  and then present a maximum of three, including a preferred option, to members next spring. A public consultation exercise will then follow.

A Major project to remove a one-way gyratory in the City of London and improve conditions for pedestrians and cyclists is on hold, pending the outcome of the Corporation’s capital programme review.

The St Paul’s gyratory transformation scheme would replace the complex traffic-dominated one-way gyratory system between St Paul’s and the Museum of London roundabout with two-way operations.

The Museum of London, which sits in the middle of the roundabout, is moving to West Smithfield in 2023-2025. “This means that the rotunda, which acts as a roundabout, will be removed, which was not part of the original scope of the project,” Carolyn Dwyer, the Corporation’s director of built environment, told members. “As the rotunda acts as a roundabout, its removal has a knock-on effect for the design approach for the other streets that make up the gyratory.”

The Corporation plans to explore changes to the operation of large parts of the gyratory, including:

• introducing two-way traffic on some or all of Montague Street, King Edward Street, Newgate Street and St. Martin’s-le-Grande

• a new signalised intersection at the junction of London Wall, Aldersgate Street and Montague Street

If the capital programme review authorises the project to proceed, the next stage will see outline options presented to members.