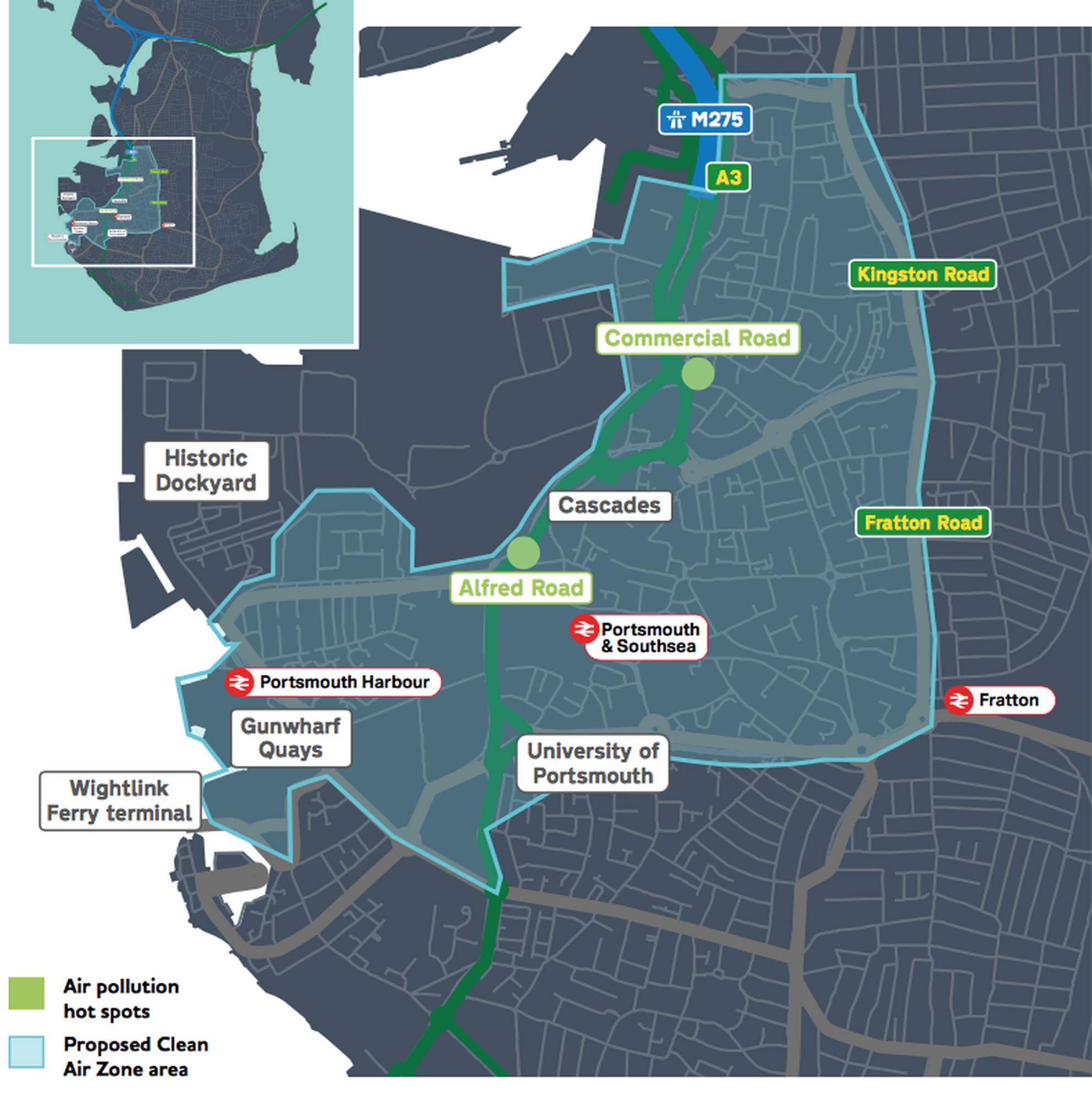 Portsmouth City Council has voiced opposition to introducing a charging clean air zone in the city as it consults on the proposal.

The Government has ordered the council to introduce a class B clean air zone (CAZ) covering a small area in the southwest of Portsea Island, including the Wightlink ferry terminal to the Isle of Wight. Modelling has suggested the CAZ is necessary to bring nitrogen dioxide down below legal limits. The CAZ is scheduled for implementation in late 2021.

Portsmouth’s Liberal Democrat council leader Gerald Vernon-Jackson has disassociated himself from the proposal. Writing the foreword to the consultation, he says: “I firmly believe the CAZ is the wrong thing to do and I have written to central government asking for the clean air zone funding to be reallocated to addressing the issue of polluting cars. I wanted to see change that would help people leave their cars at home and travel differently. This included significant investment in a safe cycle network, a polluting car scrappage scheme, and subsidised bus travel. Central government refused and told us to implement the CAZ.”

The Isle of Wight Council has said the CAZ could have a damaging effect on the island’s economy (LTT 08 Nov 19).

As things stand, the CAZ will be a class B scheme, imposing daily charges on buses, coaches, heavy goods vehicles, taxis and private hire vehicles that fail to meet minimum emission standards of Euro 6 (diesel) and Euro 4 (petrol).

The proposed daily charges are £50 for HGVs, buses and coaches, and £10 for taxis and private hire vehicles.

Portsmouth says, however, that Covid-19 could result in the Government ordering the CAZ to be strengthened to a Class C scheme, which would also apply to vans.

“At present we are not proposing to charge vans... However, due to the uncertainty brought about by coronavirus, central government has indicated they may require the charging of vans to meet air quality objectives,” says the consultation.

Vernon-Jackson said extending coverage to vans “could be devastating to small business owners that operate in the zone”.

Portsmouth is conducting sensitivity tests on air quality modelling to assess what impact Covid-19 is likely to have on compliance with NO2 limits. “These tests will consider the economic consequences of Covid-19 by reducing the rate at which the local vehicle fleet naturally renews over the coming year,” Tristan Samuels, Portsmouth’s director of regeneration, told councillors. “The tests will also consider the impact that increased home working could have on levels of traffic on the road.” Samuels said all councils preparing clean air plans were conducting similar tests. Results would be shared with the Government’s Joint Air Quality Unit.

Portsmouth has received funding from Government to contribute towards the retrofit or upgrade of some non-compliant vehicles. “However, there is not enough money to help everyone, so we are asking in the consultation how we can help those that need it the most in a fair way,” says the council.

The Government wants Portsmouth to achieve compliance with the EU limit value for NO2 by 2022.

Portsmouth has appointed Siemens to design and deliver the CAZ, including providing automatic numberplate recognition cameras.