Pandemic: an opportunity for change – or soon back to normal?

LTT’s first online discussion tackled post-pandemic issues and the prospects for a permanent recasting of the transport landscape. There was quite a range of views and a lively debate 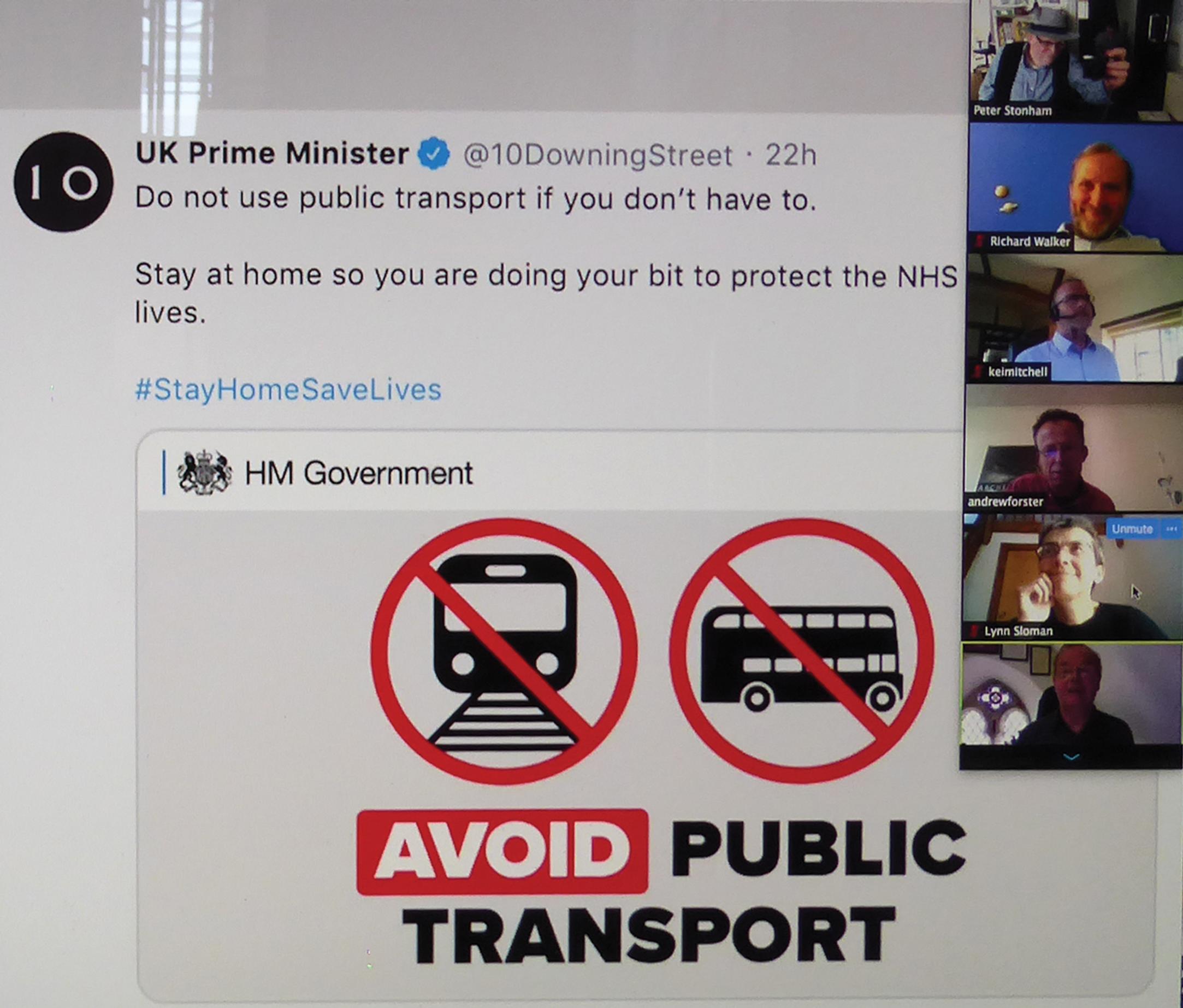 Some important and significant observations on the impact of the Covid-19 shutdown on the future of local transport in the short, medium and long terms were generated during LTT’s first online discussion on Thursday 9 April.

Some of the key areas of discussion were: how to rebuild the currently collapsed levels of bus and rail use and the finances of the operators; whether people would seek to resume their old travel patterns after the restriction ends, or adopt modified ones based on their experiences of the lockdown; and whether decisions on transport investment should be reviewed in the light of both behavioural changes and the environmental improvements experienced during the suppressed transport activity.

Professor Peter Jones said changes in the areas of economic and social activity where transport’s ‘derived demand’ originated could be significant, and it was important to understand their implications. The travel restrictions were “more liveable with now” than they would have been ten or 20 years ago because of the capability of the Internet and telecommunications and the responsive efficiency of logistics providers, he said.

There was probably a lot more online shopping activity going on, and people would be getting more used to that, and new patterns of distribution could significantly reconfigure freight delivery patterns. Meanwhile, the warnings of potential contagion by using public transport might make people more attracted to car journeys.

Richard Walker mentioned that the Government’s response to the shock of the lockdown was probably better prepared for in the light of the no-deal Brexit planning that had been going on in the last year or so. Speaking of his new role on secondment as part of the University of Leeds carbon reduction project, he said for years carbon emissions in the UK had not gone down, and “now they have”. There was a need for a “climate-smart recovery” plan to recognise the benefits that had been achieved by reduced transport impacts, and to relate to the Government’s new transport carbon reduction strategy.

Psychologist Cliff Edwards described the way people react to crises and how they change in different ways. Some are keen to revert to their old behaviours, but others are early adopters of change. “Necessity is the mother of invention,” was the adage. Overall, he thought the majority of people would quickly click back into their previous behaviour patterns when the restrictions come off. But there was evidence of people learning new social and technical skills to deal with the current crisis that they would potentially continue to deploy in a new social and economic environment, and some others – albeit a minority – would use this opportunity to rethink their patterns of activity and priorities.

Edwards also issued a warning: increasing population densities across the world meant viruses found it easier to spread, and it would be dangerous to assume that the current Covid-19 pandemic would not be followed by another variant.

Keith Mitchell said that transport planning professionals had been trying to initiate a changed process of planning and development for years, and now it had happened, but “outside our control”. In the area of land-use, commercial and contractual changes were already underway with those engaged in the sector anticipating a move away from office-based working. “What might that mean?” he asked, “this has speeded up everything”. He foresaw new supply chains to serve locally-sourced retail. All these things could have significant impacts on land-use patterns and transport.

He said the DfT should lead a review into what the crisis had brought in terms of travel and transport behaviour. In a later comment, Mitchell said “we’ve shown that much travel is not really essential or necessary”.

Lynn Sloman said the upheaval “may change our view of what transport investment is really for”. It had traditionally been about increasing productivity, but she asked if that was the main priority now? Maybe economic resilience was more important, and might that change our priorities? She saw the current situation leading to a reassessment of the public sector’s role and its “crucial” leadership function.

“I think the nature of public discourse over the last 20 or 30 years has very much been about government not being able to take on big issues, leaving things to the markets, and I think what’s so abundantly clear from coronavirus is that when you get a real emergency you need government, you need the public sector to pull everything together. Climate change is a slow motion emergency compared to coronavirus but it is still an emergency, and I suppose in more hopeful moments I think that the lesson that we’re learning about the crucial role of the public sector, and of government, may play through into a legitimisation of a bigger role for government leadership and maybe even a greater confidence from government that if it explains why big changes are necessary, people will understand.”

The massive amount of money being spent by the Government to respond to the virus might put transport investment under the spotlight, she thought. Her specific target was the DfT’s enhanced road programme, which was completely inconsistent with the Government’s net zero greenhouse gas emissions target.

In the lively discussion that followed, Roger French, secretary of bus managers’ innovation group the Ten Per Cent Club, showed a visual of a Government notice urging people to “avoid public transport” – a message he hadn’t ever expected to see. This message would need a very quick and sharp reversal as restrictions were lifted, he said, or else people would stay in their cars. This could be a real short-term problem for the industry’s finances. He warned that a ‘City view’ of the value of investing in public transport companies and infrastructure could be very negative in the light of recent experience, and the rival opportunities to invest in pharmaceuticals businesses, etc.

The discussion turned to roads and streets, and whether the reduced traffic levels presented opportunities to reallocate space away from general traffic towards active travel. Richard Walker quipped “We’ve cleared the streets – now what are we going to do with them?”

John Dales thought that responses to the current situation had prompted behavioural changes that could stick, such as people walking to their local high streets. “Let’s build on that. We should prioritise space accordingly, and to help buses in their revival.” The two-metre social separation had shown the lack of capacity for comfortable use of the pavement, and if anything like that were to continue, it meant repurposing streets. “We must think now about how to allocate space going forward.” Roger Geffen, director of policy at Cycling UK, thought lots of new people had taken up cycling during the crisis, and it was a good time to introduce new facilities and benefits to lock that in.

Steve Gooding, director of the RAC Foundation, sounded notes of caution. The professionals taking part in the discussion should recognise the fact they weren’t representative of the wider world and general public, and both in the Government and in wider society there could well be a clear wish to get things “back to normal” as quickly as possible. Some people would be saying, “‘let’s get the traffic moving, and de-restrict parking in our town centres to get people back into the shops’”. “Don’t forget real people,” he urged, suggesting that some professionals might be “entirely expert”, but “completely unpersuasive”.

Martin Tugwell, programme director for the England’s Economic Heartland, said: “I just ask what would we do if we were told we could go outside as of now. Are we all content with the style of living that we’ve got right here right now? The vast majority of people are itching to get out. And I think whilst there are elements of what’s changed that we want to try and capture, we mustn’t be naive. We are social animals, we want to move, we want to experience, and that will be retained.”

Former DfT chief scientist Professor David Metz said he had been impressed with the way  health modelling had been used in the current crisis, describing it as “collaborative, open and crowd-sourced”. There needed to be the same for transport and its modelling methods. At this point Andrew Forster commented on the screen view of the discussion participants, “I haven’t seen so many nods on anything else!”

LTT editorial director and Landor Links chairman Peter Stonham concluded last week’s discussion with some thoughts about the pandemic’s implications for his own business. There was a significant impetus to the shift away from traditional publishing concepts, and he felt the online Zoom discussion was a big step for Landor into live broadcasting. It was employing the same technology as broadcasters such as the BBC, who themselves were recasting their production and delivery models to bring together staff working from home and create interactive discussions like this one. He summarised the situation as “significant media convergence”.

LTT’s first online discussion was generally very well-received by participants, who willingly overran the original hour time slot by 30 minutes. Forster quipped the event had been “ten times more fun than editing the magazine”. “I’m glad to hear that,” Stonham replied. “I’m sure you’ll be doing more of this kind of activity!”

Comments made through the Zoom chat messaging system during the event suggested it had been a worthwhile experience. Transport consultant Ken Lin in New York, messaged: “A great session – but some of the radical changes you’ve been discussing would be unlikely to play over here!”

Watch the full discussion – and join our next one

You can watch a recording of the first Zoom discussion below

Our next discussion will take place at 2pm on Friday 24 April.

The topic will be: THE PSYCHOLOGY OF CHANGE – HOW MIGHT THE COVID-19 EXPERIENCE PROMPT DIFFERENT TRAVEL AND TRANSPORT BEHAVIOUR?

If you’d like to take part, just register your interest with Tom Daldry at: tom.daldry@landortravelpublications.com or go to TransportXtra.com/events and you will be provided with the necessary access information.