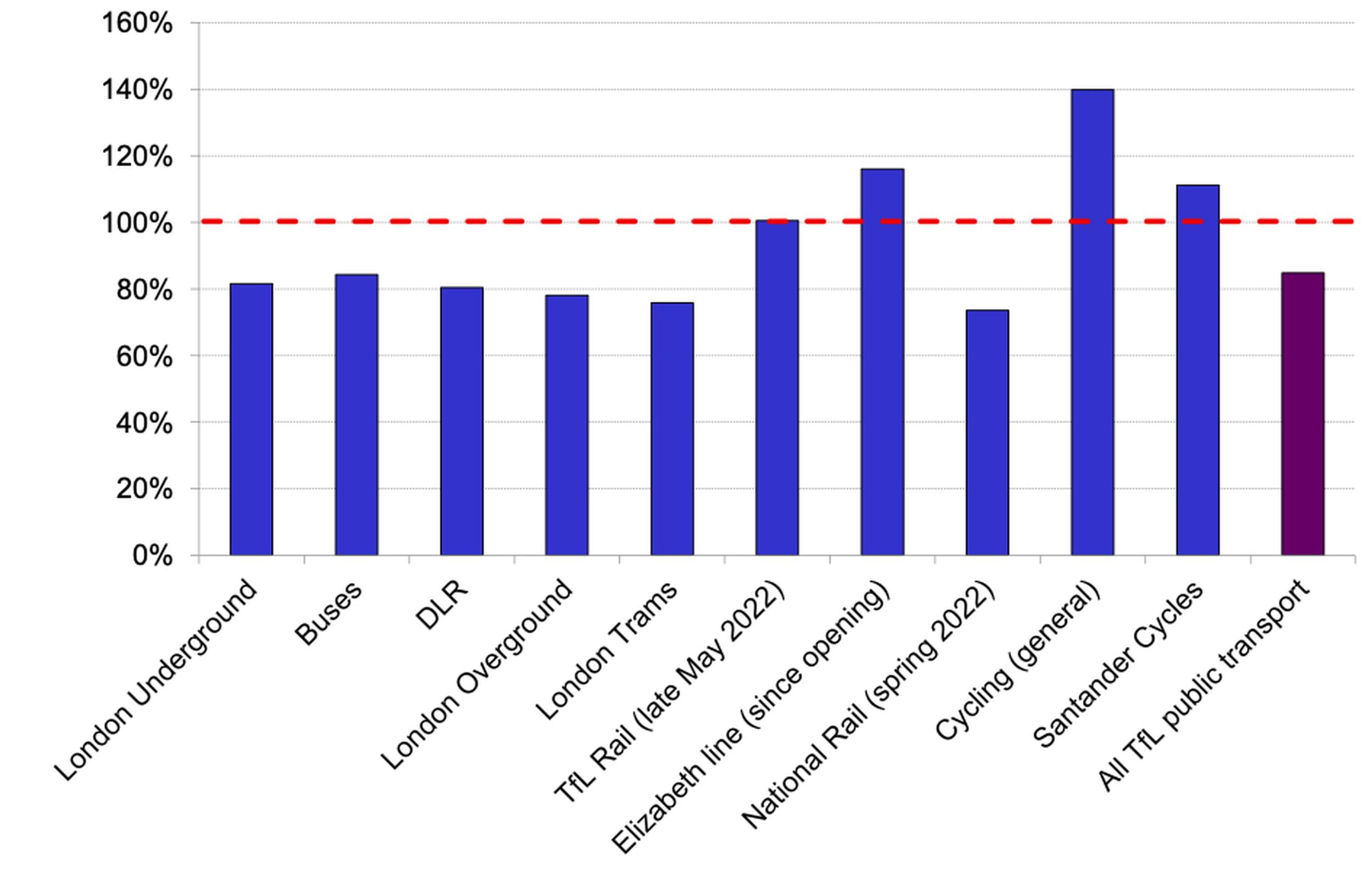 Cycling and walking levels in the capital remain higher than before the Covid-19 pandemic, according to new data published by Transport for London (TfL).

Cycling in autumn 2022 was 40% higher than in 2019 while cycling on weekdays was typically been around 20-25% than pre-pandemic levels, despite the drop in commuting, says TfL’s report.

There has been a particularly big rise in cycling at weekends – up around 90% compared with pre-pandemic levels. The proportion of people living within 400 metres of a high-quality cycle route is now almost double what it was in 2019, with 22% of Londoners now living near one, compared to 12% in 2019, says TfL.

Walking is also up, the data reveals. Around 35% of journeys in London were made on foot before the pandemic while the latest quarter of available data, for April-September 2022, shows that the proportion of journeys made on foot is now 41%. The data also shows the number of walking journeys that were made per person per day between April and September 2022 was 11% higher than the 2019/20 pre-pandemic average.

Data for September 2022 also shows that the number of people hiring Santander Cycles was 11% higher than the pre-pandemic. There have been 10.9 million hires so far in 2022, which is 762,500 higher than the same point last year.

The report also points to improvements?in?air quality, reflecting the extension of the Ultra Low Emission Zone to?inner?London, with estimated reductions of 20% in NO2 concentrations.

However, outer London?now accounts for an increasing proportion of NOx?and PM2.5?emissions from road transport, the report says. The expansion of ULEZ to outer London will be supported by a range of measures to enable the switch to greener forms of transport, including a new and improved bus network and a new £110m scrappage scheme, it adds.

Passenger numbers on?London's public transport network have continued to recover in the wake of the pandemic, according to the report. In October, demand for?Tube services across the week was around 82% of pre-pandemic levels, with weekend ridership levels on Tube and bus “increasingly edging towards those seen pre-pandemic”, says TfL.

Alex Williams, chief customer and strategy officer, said:“We're determined to ensure that the way people travel in London is as healthy and sustainable as possible and continuing to encourage people back onto public transport is also a key part of this. We'll continue to work closely with boroughs to transform our roads and invest in our transport network, enabling even more people to shift their journeys to walking, cycling and public transport."

London's Walking and Cycling Commissioner, Will Norman, said: “We must continue to make active travel around the city as accessible and safe as possible. That's why I'm delighted that this year we've seen the introduction of e-bikes to the Santander Cycles scheme, we've built hundreds of kilometres of new or upgraded cycle routes since the pandemic and completed work to make some of the capital's most dangerous and intimidating junctions safer.

“The Mayor's bold decision to expand the Ultra Low Emission zone London wide will also see new support put in place to help people switch to greener options such as public transport, bikes, e-bikes or car clubs. The Mayor and I are determined to continue building a cleaner, greener and more prosperous London for everyone and investing in and encouraging use of sustainable transport options is a vital part of that.”

“But we need to go further. People who have a physically active lifestyle have a 20-35% lower risk of cardiovascular disease, coronary heart disease and stroke compared to those who have a sedentary lifestyle. With 38%of adults and 66% of children in London not having the recommended amounts of physical activity, it's clear that we still have a lot of work to do to create a city where everyone can lead healthy and active lives by choosing to walk, wheel or cycle their everyday journeys.”