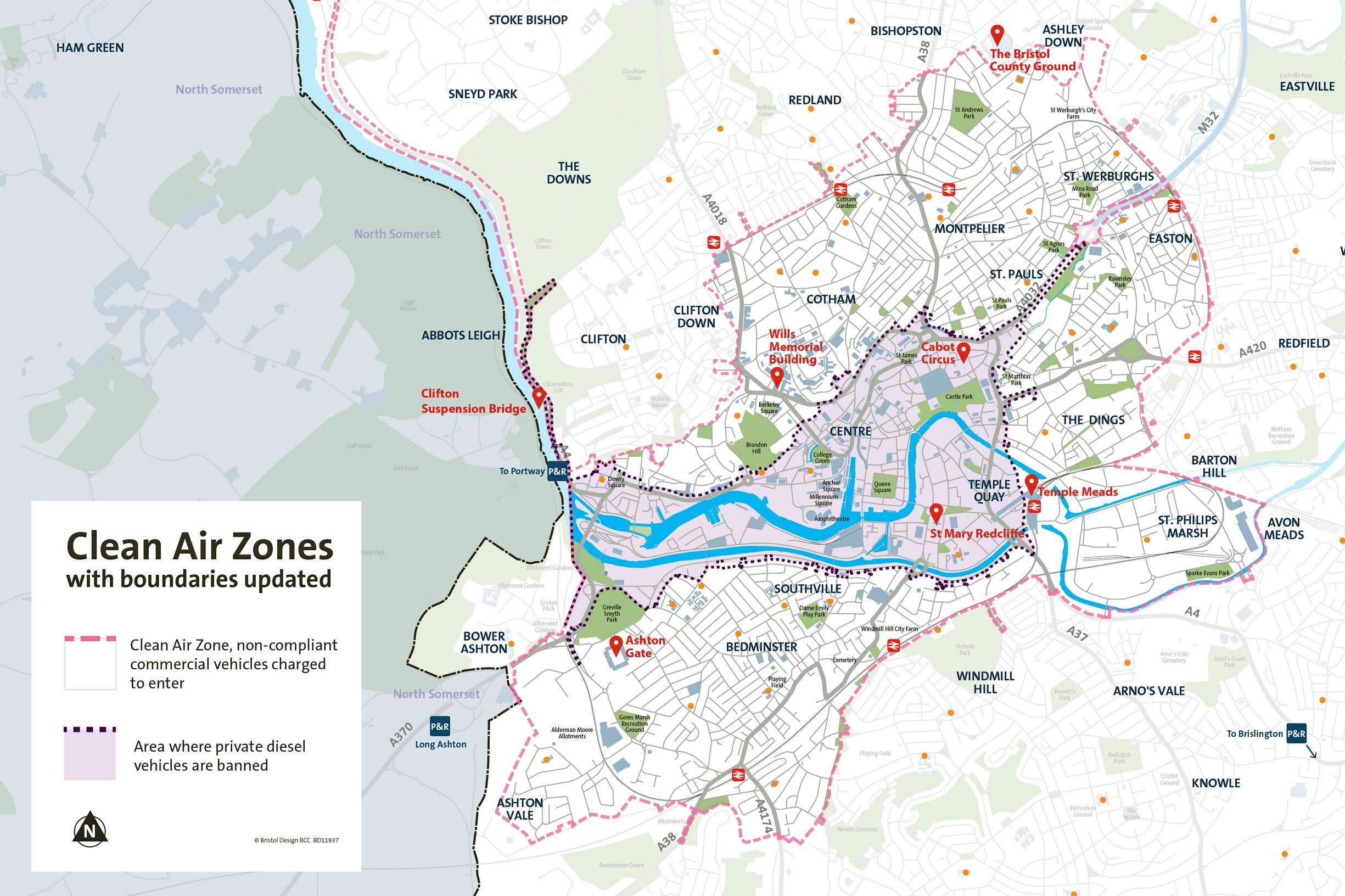 Councillors in Bristol this week approved plans for a charging clean air zone (CAZ) covering a large part of the city and a ban on diesel cars in the city centre.

The restrictions are due to be implemented by the end of March 2021 and are expected to ensure the city complies with the EU annual limit value for nitrogen dioxide by 2025. The outline business case for the proposals has been submitted to the Government for approval. Subject to ministerial backing, a full business case should be presented to Bristol’s cabinet next February.

The Class C CAZ would cover a large part of the city (see map), introducing charges for non-compliant buses, coaches, taxis, heavy and light goods vehicles (vans). Vehicles failing to meet the CAZ’s minimum standards of Euro 6/VI (diesel) and Euro 4 (petrol) would incur a daily charge of £9 for taxis, private hire vehicles, and vans, and £100 for buses, coaches and HGVs.

The diesel vehicle ban will operate between 0700 and 1500 seven days a week, covering the city centre and harbourside and beginning at the end of the M32 in the north-east (see map). Exactly what vehicles will be covered by the ban was the source of some confusion this week. The report presented to the council’s cabinet describes a diesel car ban and a separate proposal for a 3.5 tonne weight restriction on a larger number of streets in the central area. But the map supplied by the council to LTT describes an area “where private diesel vehicles are banned”.

Chris Yarsley, the Freight Transport Association’s policy manager for the southwest of England, said: “The messages surrounding the plans from the council are confused and misleading. While previous consultations only discussed a ban on cars, it is now unclear whether lorries and vans will also be included. If so, how does the council expect goods to be delivered to supermarkets, businesses and homes? There are currently no viable alternatives to diesel-run lorries.”

Taxis, private hire vehicles and emergency vehicles will definitely be exempt. The council this week published a set of ‘frequently asked questions’ that clear up some of the confusion for other vehicle types. Bristol says the ban applies to “only privately registered vehicles”. “If your van or lorry is registered as a light goods vehicle it will not be affected... access is only restricted for private registered cars.” It adds: “All commercial vehicles that have paid to enter the wider clean air zone will be able to enter the diesel ban area.”

The position for HGVs still lacks clarity, particularly because the reports presented to councillors speak of the need for a 3.5 tonne weight restriction on a number of city centre streets: Rupert Street, Baldwin Street, Park Row/Upper Maudlin Street, Marlborough Street and Lewins Mead. The reports said the restriction may be limited to eight hours a day, like the diesel vehicle ban. Yet the weight restriction does not appear to be covered by the councils’ FAQs.

Motoring organisations said the diesel ban was irrational. Paul Biggs, environment spokesman for the Alliance of British Drivers, said the Euro 6 standard for diesel cars was 0.08 grammes of NOx per kilometre, almost identical to 0.06 for a Euro 6 petrol car. “Euro 6 diesel and petrol cars meet the same standards – NO2 is eliminated from diesels via Ad Blue (urea) and particulate matter is eliminated by diesel particulate filters,” he said. “ADAC [the German automobile club] tested the real-world emissions of 13 Euro 6 diesel cars and six of them were cleaner than the equivalent petrol model.”

The Society of Motor Manufacturers and Traders was similarly critical: “This proposed blanket ban, which goes against Government guidelines, fails to distinguish between modern vehicles and decades-old technologies and will only cause confusion for drivers while also undermining efforts to boost air quality. The development of the latest low emission technology has resulted in new vehicles that have vastly reduced NOx and virtually eliminated particulates.

“Instead of the proposed ban, we need a clear and consistent national approach to CAZs that incentivises uptake of the latest, low emission vehicles, including new Euro 6 diesels, which are the cleanest ever produced.”

Bristol justifies including Euro 6 diesels in the ban by saying tests have shown that many emit far higher levels of pollutants in real world conditions than the standard permits. “Even the best manufacturer group had Euro 6 NO2 emissions of more than twice the type-approval limit, and all other manufacturer groups were at least four times the type-approval limit,” it says.

The council considered a 24-hour diesel ban but now says this is unnecessary to comply with the NO2 limit value. A background report prepared for the council by consultant Jacobs hints that one reason for the proposed hours of operation (0700-1500) may be to circumvent the need to hold a public inquiry into the Traffic Regulation Order for the ban. Says Jacobs: “The Local Authorities’ Traffic Orders (Procedure) (England and Wales) Regulations 1996 requires that a public inquiry shall be held if a valid objection is received to any TRO if its effect is to prohibit the loading or unloading of vehicles of any class in a road on any day of the week: at all times; before 0700 hours; between 1000 and 1600 and after 1900 hours.”

In a report to councillors, Adam Crowther, Bristol’s head of strategic city transport, said the diesel vehicle ban would  require secondary legislation, but added: “Following our conversations with the DfT and Defra we are confident this will be achieved.” Asked what secondary legislation was needed, a council spokesman pointed LTT to the Traffic Management Act 2004 moving traffic offence powers. These are already available to councils in London (and Wales) but the Government has refused to grant them to councils elsewhere in England.

Signage for the ban will require special authorisation from the DfT. Bristol proposes that the signage will notify drivers of a ‘diesel prohibition zone’.

Based on advice from the Government’s Joint Air Quality Unit and local surveys, the following are the predicted responses to the CAZ from owners of non-compliant vehicles:

Bristol’s consultants estimated that in the first year of the CAZ operation, 833,000 non-compliant vehicles will enter the zone. Of these, 92 per cent are expected to pay the charge on time, with the remaining eight percent receiving a penalty charge notice.

• an M32 park-and-ride site with inbound bus lane from junction 2 to Cabot Circus car park. A location for the P&R site has not yet been identified

• a £10.84m private diesel car scrappage scheme, which would award grants of £2,000. The full grant payment would cover 5,420 vehicles. Residents of the four unitary authorities of Bristol, Bath & North East Somerset, North Somerset and South Gloucestershire would all be eligible for the grant if their drive into work passes through the charging zone area or they live in the charging zone. Grant applications will be prioritised for those living in the diesel ban area and those on low incomes.