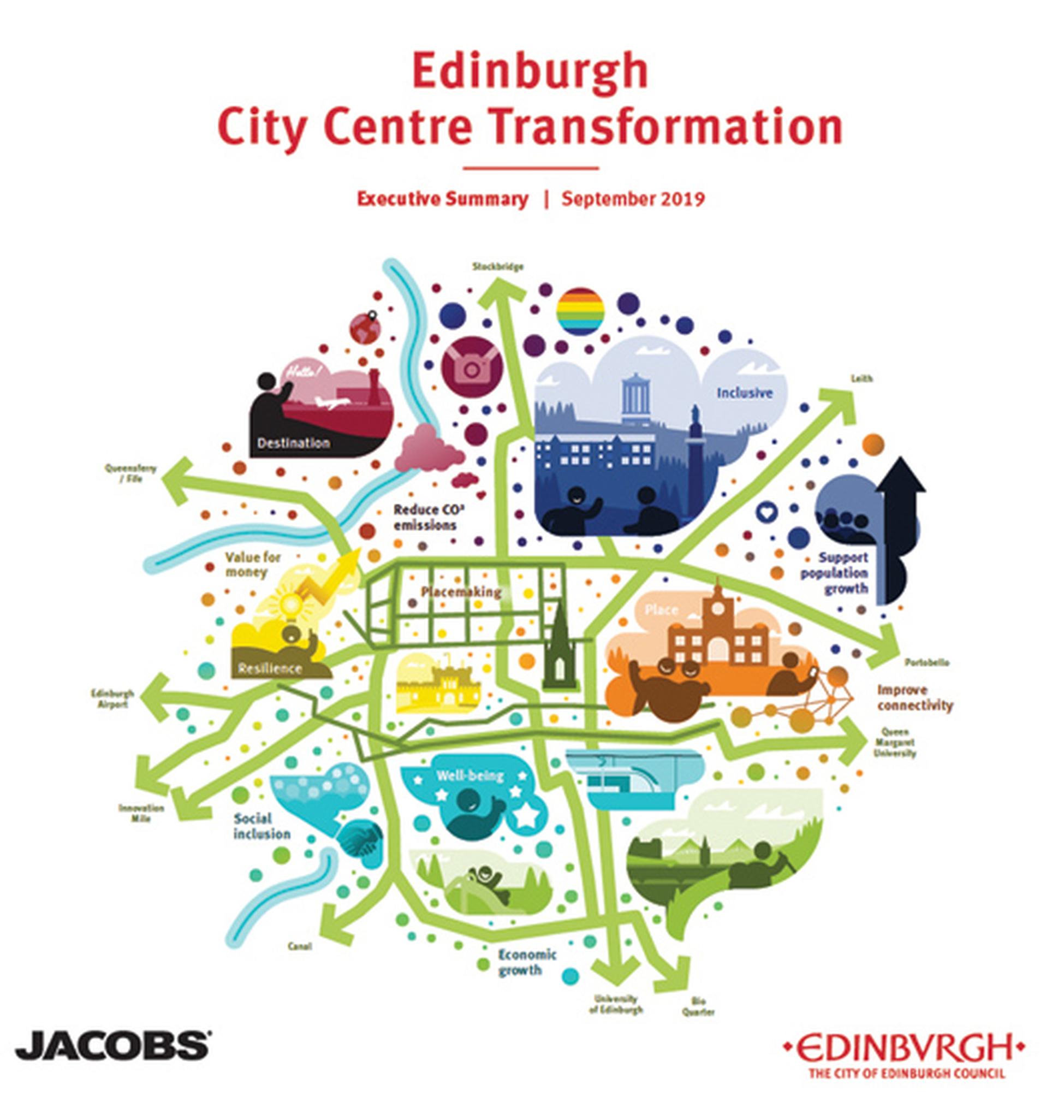 A £341m plan to introduce vehicle-free streets and pedestrian priority zones in the centre of Edinburgh has been approved by the city council.

Works on a range of street improvement projects is due to start in 2020. Some streets in the centre will be closed to traffic, including High Street, Victoria Street and Cockburn Street.  “Some of these, such as Bank Street, will still permit movements by bus and cycle users,” a council spokeswoman told LTT. “Other streets, such as Market Street, Cowgate and Canongate will be open to traffic but will have managed access to reduce the impact of through traffic.

“Parking will be removed from the streets closed to traffic, and from a selected number of other streets, such as Chambers Street.  A holistic review of on-street parking supply will ensure that resident and blue-badge parking is prioritised across those streets where parking will remain (the vast majority of the network).”

Funding is already in place for the £60m first phase of the plan, covering the next five years. This has been raised through developer contributions, and match-funding grants from Transport Scotland administered by the charity Sustrans.

Funding is being sought for phases two and three of the strategy, covering the second five-year period. Edinburgh City Council said it will raise funds from its capital programme, complemented by further developer contributions, and match funding from Transport Scotland.

The strategy will deliver £420m of benefits over a 25-year period, the council estimates. “This value has been quantified through economic benefits, such as accident prevention and additional spending in the city centre, as well as benefits to individuals’ quality of life resulting from the strategy, such as their satisfaction with public transport and improved air quality,“ said the spokeswoman. “These ‘wellbeing’ benefits will have a significant impact on the quality of life for individuals living in and interacting with the city centre and in turn lead to improved economic outcomes for the city as whole. ”

‘Filtered permeability’ will be introduced on some city centre streets, said the spokeswoman. “This is a traffic management technique that aims to reduce through-traffic in certain areas by restricting access to local vehicles only, while permitting bus and cycle movements. General vehicle movements are restricted, through access or turning restrictions that make through-movements more cumbersome and less attractive in the area.”

The council will consider the needs of disabled people and others who are dependent on private cars, the spokeswoman added.  “The strategy aims to discourage traffic from passing through the city centre, but those who require to access the city centre by car will still be able to do so, with the exception of a limited number of streets.

“On-street parking will be prioritised for disabled users, and for those streets where car access is no longer permitted, the strategy has identified a range of measures to make it easier for people with mobility impairment to access, such as improved vertical connections and enhanced shopmobility facilities.”

Daisy Narayanan, director of urbanism at Sustrans, described ECCT as a “groundbreaking strategy”. She told LTT: “This is the first time I have seen a truly place-based approach. Housing, planning, economic development, transport, finance are all in the scheme.”

A cross-party steering group is developing the strategy, which will help to ensure continuity, said Narayanan. “The narrative has shifted from being about transport and streets to looking at how our streets can be more equitable. We are getting away from thinking about conflicts between cyclists and drivers.”

As the strategy develops it is vital there is proper community engagement, she said. “People understand the outcomes – they generally accept the idea of less car-dominated streets and improved air quality. But we have to understand what the changes mean to someone who lives in the centre or someone with mobility issues. We have got to get that right.”