Not content with putting HS2 on the political map, Greengauge 21 has turned its attention to mapping out a 20-year investment plan for Britain’s railways. Andrew Forster reports 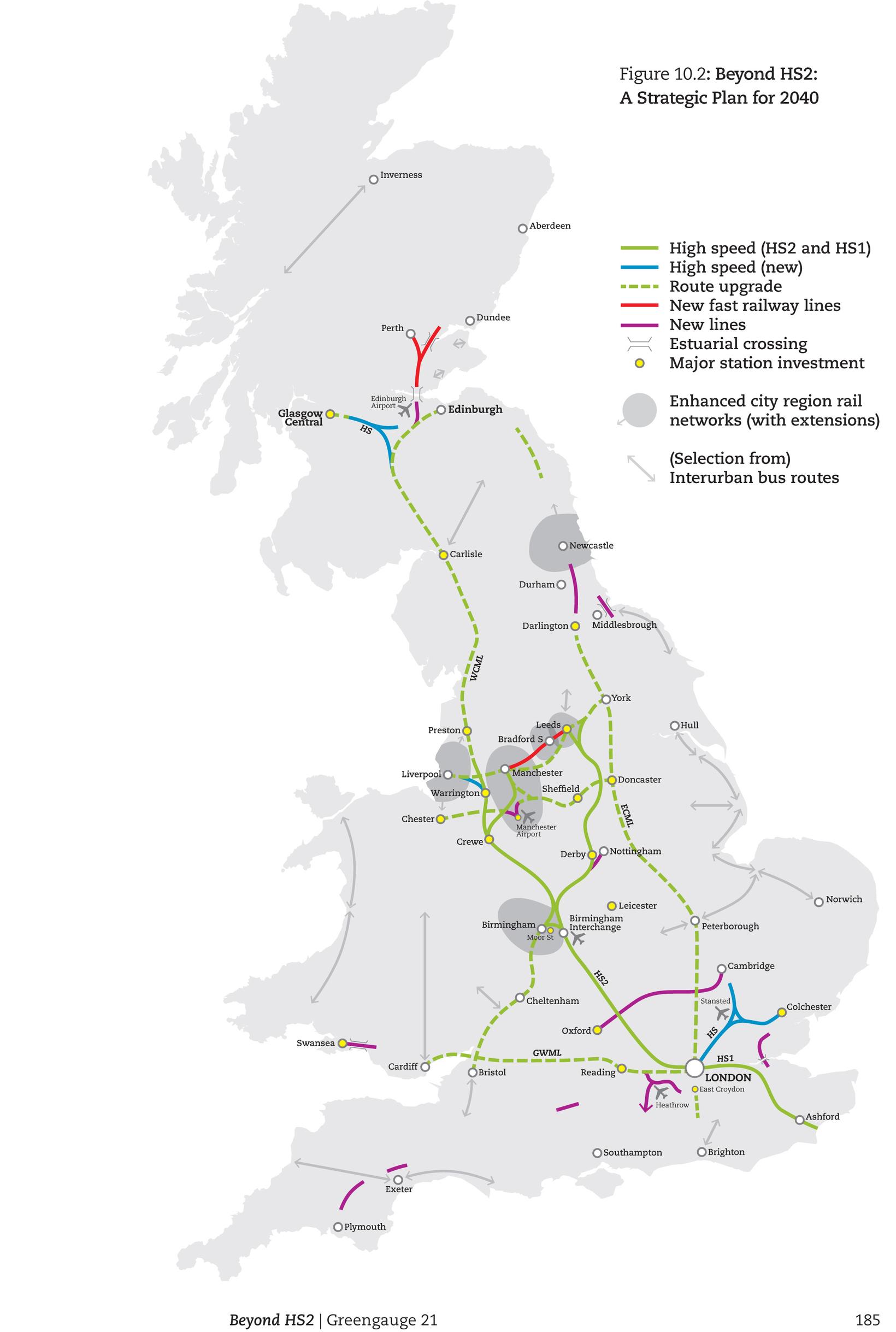 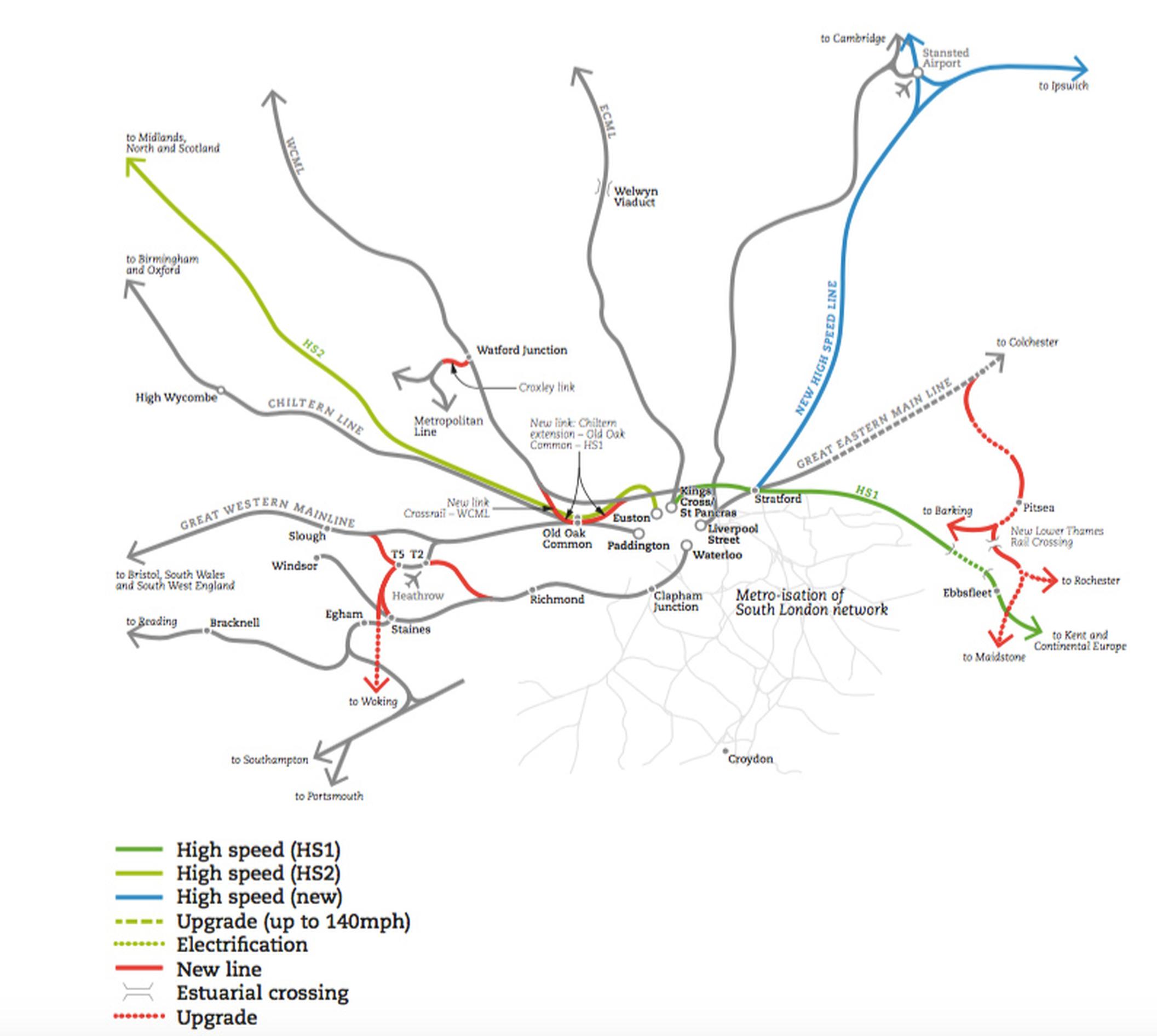 A long-term plan for Britain’s railways, involving expenditure of hundreds of billions of pounds on new lines and upgrades, has been published by Greengauge 21, the think tank-cum-lobby group that helped put high-speed rail, in the form of HS2, on the political map. Timing is important in politics and Greengauge may be rueing its decision to release the report when some operators cannot run today’s timetable. It will be hoping the National Infrastructure Commission, which is currently preparing an assessment of the country’s infrastructure needs, is not distracted by such tribulations, and that the problems do not harm the political appetite for rail investment.

The purpose of the 220-page report, titled Beyond HS2, is to fill a vacuum in thinking about the rail network’s purpose and long-term development. Writing the report’s foreword, Professor David Begg, chief executive of the electronic publication Transport Times and a former chair of the Labour Government’s Commission for Integrated Transport, says: “Beyond HS2 is a tour de force – a report engaged in the lost art of planning that successive governments have shied away from but that the National Infrastructure Commission now needs to foster and encourage the rail industry to take forward.”

Although rail patronage has fallen in many markets of late, the authors contend that the long-term conditions for passenger growth remain strong. “The background trend over two decades is one of consistently strong growth?in passenger numbers – over 4 per cent per annum – even though rail fares have been growing by almost twice the rate of increase in motoring costs in the last decade,” they say. “Rail has been well-placed to serve the growth in city centre employment as well as long-distance travel, but a generational trend also seems to be taking place with less and later full driving licence acquisition amongst younger age groups and public transport use growing.”

Transforming national productivity should be the core priority for the railways, says the report, and,?in this respect, it warns that “we risk becoming over-reliant on the delivery of HS2”. “The ambition to re-balance the national economy needs much more than HS2; whole regions – the South West, East Anglia, South Wales, for example – cannot be left to struggle with second-rate and over-stretched transport infrastructure. And it is better if HS2 is not treated as a stand-alone project given its wider potential.”

The plan proposes re-orienting the railway network from a hub-and-spokes arrangement based on London to one connecting city centre hub stations. It recommends:

• 97 miles of other new lines, of which the Okehampton-Tavistock re-opening in Devon and Bedford-Cambridge (East West Rail) comprise 60 per cent

• 838 miles of route upgrades, of which the three main lines – West Coast, East Coast and Great Western – comprise 66 per cent

• two new port access routes (for Tilbury/Gateway and for Liverpool), and completion of the Felixstowe – Nuneaton strategic freight route

The report’s time horizon is 2040 but Greengauge says much of what it recommends could be implemented in the 2020s. The report has little to say about how its vision can be funded. Acknowledging the devolution agenda, it says: “The most important point we want to make is that, while planning the next wave of rail capital investment requires far more attention to regionally-set aims, it would be simply wrong to imagine that combined authorities or sub-national transport bodies have the resources to take on the challenge themselves. These are large programmes, and a new funding mechanism is needed.”

Beyond HS2 is available at http://tinyurl.com/y9znbbrg

The following is a selection – and by no means an exhaustive list – of proposals contained in the report:

The East Coast Main Line should be upgraded to 140mph operation, so that passengers in the North East are not dependent on indirect HS2 services via Birmingham to reach London.?This would, in turn, free-up capacity on the eastern arm of the HS2 Y-network for cross-country services between the North East/Yorkshire and Birmingham, Cardiff and Bristol.

An upgraded fast route from Birmingham to Bristol Parkway would carry HS2 trains, which could continue to the South West and South Wales.

“In effect, HS2 is re-configured as an X rather than a Y – achieved by an additional HS2 junction in the Midlands and an upgrade of the Birmingham-Bristol line,” says Greengauge 21.

At Birmingham it would be better to route HS2 trains to/from the north into New Street, which is a through station, rather than into the proposed HS2 terminal station at Curzon Street. This could be achieved via a connection between HS2 and the existing Birmingham-Derby line near Kingsbury.

Says the report: “If there is too much pressure on New Street station to accommodate all of these trains, some could bypass the city centre, saving further time by using the avoiding lines (via Camp Hill) to King’s Norton (for South Wales and the South West) and Tyseley (for Leamington, Oxford and the South), or they could use the planned spurs into the ‘Midlands Hub’ – an expanded Moor Street station.”

Greengauge also recommends building a connection between HS2 and existing lines near the proposed East Midlands station at Toton so that trains from Leicester and Nottingham can join HS2 and travel north.

Greengauge 21 criticises the current plans for all HS2 and Great Western Railway trains to stop at Old Oak Common in West London.

“This makes little sense: adding up to five minutes to all these journeys is unnecessary. Old Oak needs to be designed to operate with some trains on HS2 and some or all trains on the ‘fast’ pair of GWML tracks not stopping.”

Greengauge is excited by Chiltern Railways’ plan to use the existing surface rail corridor from its main line through Hanger Lane to reach Old Oak Common station. “The Chiltern line extension forms the western approach to a route that needs?to be married with a tunnelled connection to the east,”it says. “The latter is provided for ‘passively’ in HS2 plans, and would connect with the existing line though Primrose Hill that is in turn already connected with HS1 at the north end of St Pancras.

“Such a route would connect the Chiltern Line with HS1 and its successful high-speed domestic train services. It could, therefore, if extended as proposed here, offer cross-London regional services between Kent (and East Anglia via an interchange at Stratford) and the Chiltern line from the West Midlands through Warwickshire/Oxfordshire/Buckinghamshire. It would have key interchanges en route across London at Stratford and Old Oak Common that would provide a multitude of significant new linkages. In effect HS2 would extend its appeal across a wide southern catchment area of East London, Docklands and Kent.”

A new high-speed line between London and Stansted Airport and beyond towards Cambridge/Colchester could alleviate the West Anglia and Great Eastern main lines, and deliver a 15-minute London-Stansted journey time.

“If later extended north of Cambridge to Peterborough (either by line of route upgrade or further new build), [it could] provide capacity relief to the East Coast Main Line and potentially (after 2040) form the southern end of a second north-south high-speed line,” says Greengauge.

A new rail crossing of the Thames east of Tilbury could benefit both passenger and freight trains. The line would potentially link onto the North Kent route near Hoo (east of Dartford) and permit a new network of Essex-Kent passenger services to be built up between the Medway Towns, Dartford, Maidstone and Tonbridge and destinations in Essex including Colchester, Chelmsford, Southend and Thurrock.

“Given the volume of car traffic at the Dartford River Crossing, passenger demand for a link of this kind is likely to be high and it would remove the significant connectivity barrier that the Thames has become.”

The line would provide a freight bypass for London. Channel Tunnel freight could be diverted from South London altogether, freeing up capacity for further metro services, by use of the Medway Valley route via Maidstone.

The opening of HS2 phase 2 is projected to deliver a London-Edinburgh/Glasgow journey time of about 3hrs 40mins. The report explores how this could be reduced to 3hrs 15mins. It suggests:

• creating a segregated higher speed route between Glasgow Central and Carstairs, as is being examined by Transport Scotland;

• removing low speed sections of line, including at Carlisle and Preston (saving (say) five minutes, and providing each of these places with a modernised hub station);

• increasing line speeds where possible between Carstairs and Wigan to 140mph and ensuring all passenger services can operate at line speed;

• obligating freight operators to use suitable electric traction and providing a set of strategic freight ‘dynamic’ freight loops or ‘crawler lanes’ for Shap/Beattock that allow passenger services to overtake freight trains without causing extended journey times for freight; and

• reconstructing Carstairs junction in South Lanarkshire to allow fast operation between the south and Edinburgh and upgrading the Carstairs-Edinburgh line for 125mph operation.

A new fast link between Glasgow and  Edinburgh Airport and Fife could be created by building a spur off the new Glasgow-Carstairs line (see above)  onto the Shotts line near Breich. This would facilitate a service connecting Glasgow Central-Livingston (where Greengauge says a new station is being considered)-Edinburgh Gateway (for the airport)-Fife-Dundee.

“The most glaring opportunity for rail north of the [Scottish] central belt would see?the re-creation of a direct rail link from Edinburgh to Perth. If this link can be configured to provide a faster route to Dundee as well as Perth there is the prospect of significant journey time reductions for Aberdeen and Inverness as well.”

The plan proposes prioritising freight over a small number of selected long-distance corridors but “progressively discouraging it along routes where its continuing accommodation is very costly”.

“No further freight capacity should be allocated on the Midland Main Line between London and Leicester,” says Greengauge. “This may seem a severe step but, as is now clear, the practical requirements of running a metro-style Thameslink service from St Pancras (Low Level), coupled with an East Midlands Trains service expanding to six trains per hour, severely limits the timetable options south of Bedford.”

Pressures also exist on the North London Line. “The pressure to move to ‘Tube-style’ frequencies for this busy passenger route (TfL wishes to increase frequencies by a further two trains per hour from six tph in the peak today) interacts strongly with long-term growth in intermodal traffic. It seems likely that the pressure to relieve overcrowded Overground passenger services will be a decisive factor.

“Some of the freight flows are to/from Felixstowe so if the Felixstowe to Nuneaton project proceeds as suggested, that will relieve some of the demand pressure on this line.

“If London Gateway freight flows were to increase significantly, a solution could be to build a new tunnel to link the Gospel Oak route to Chalk Farm to provide access onto the West Coast slow lines for freight trains.”