A high five from the Cambridgeshire Guided Busway

BRT is at the heart of the Greater Cambridge City Deal transport strategy and based on the success of the Cambridgeshire Guided Busway, which celebrated its fifth birthday in August. Bob Menzies updates the situation 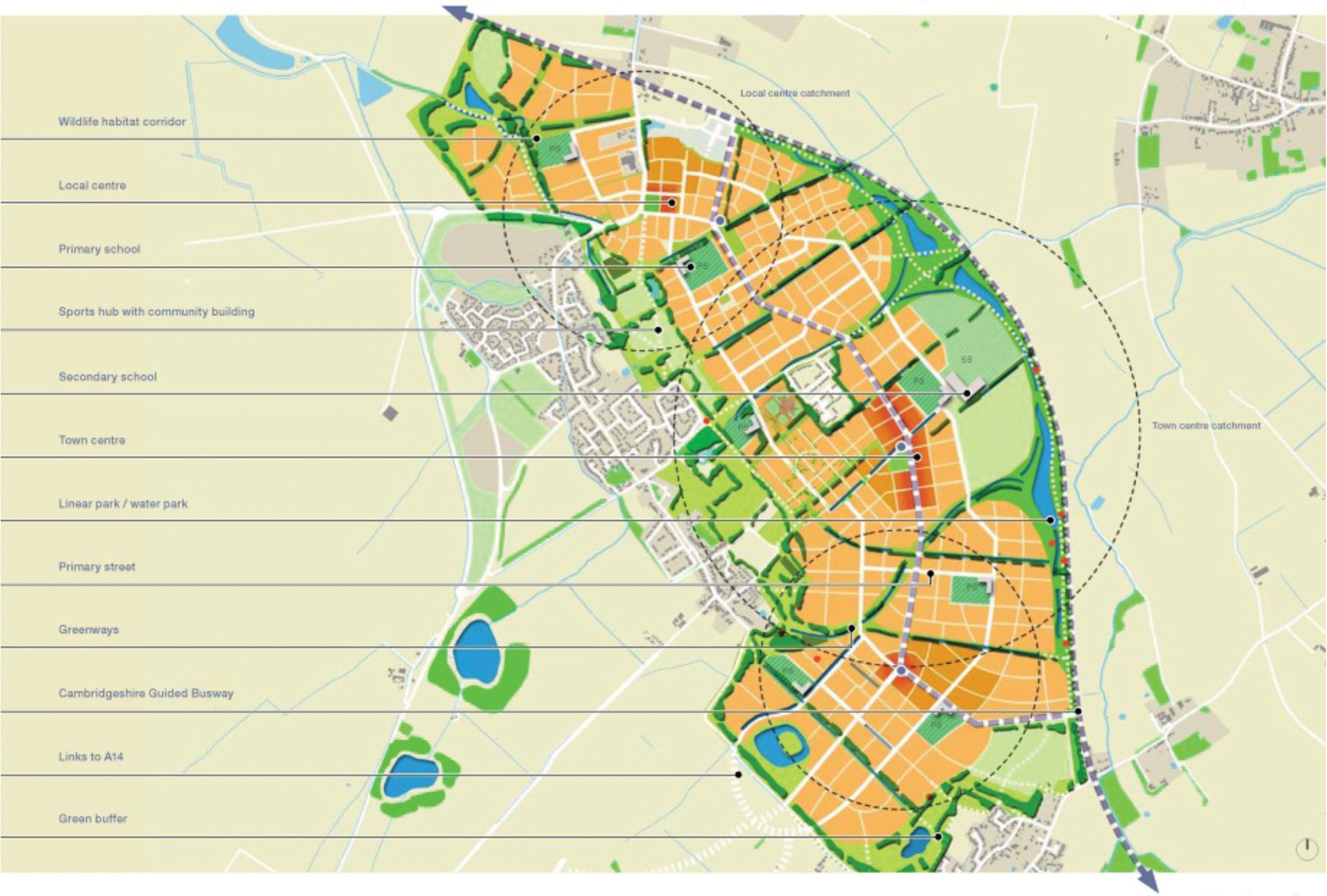 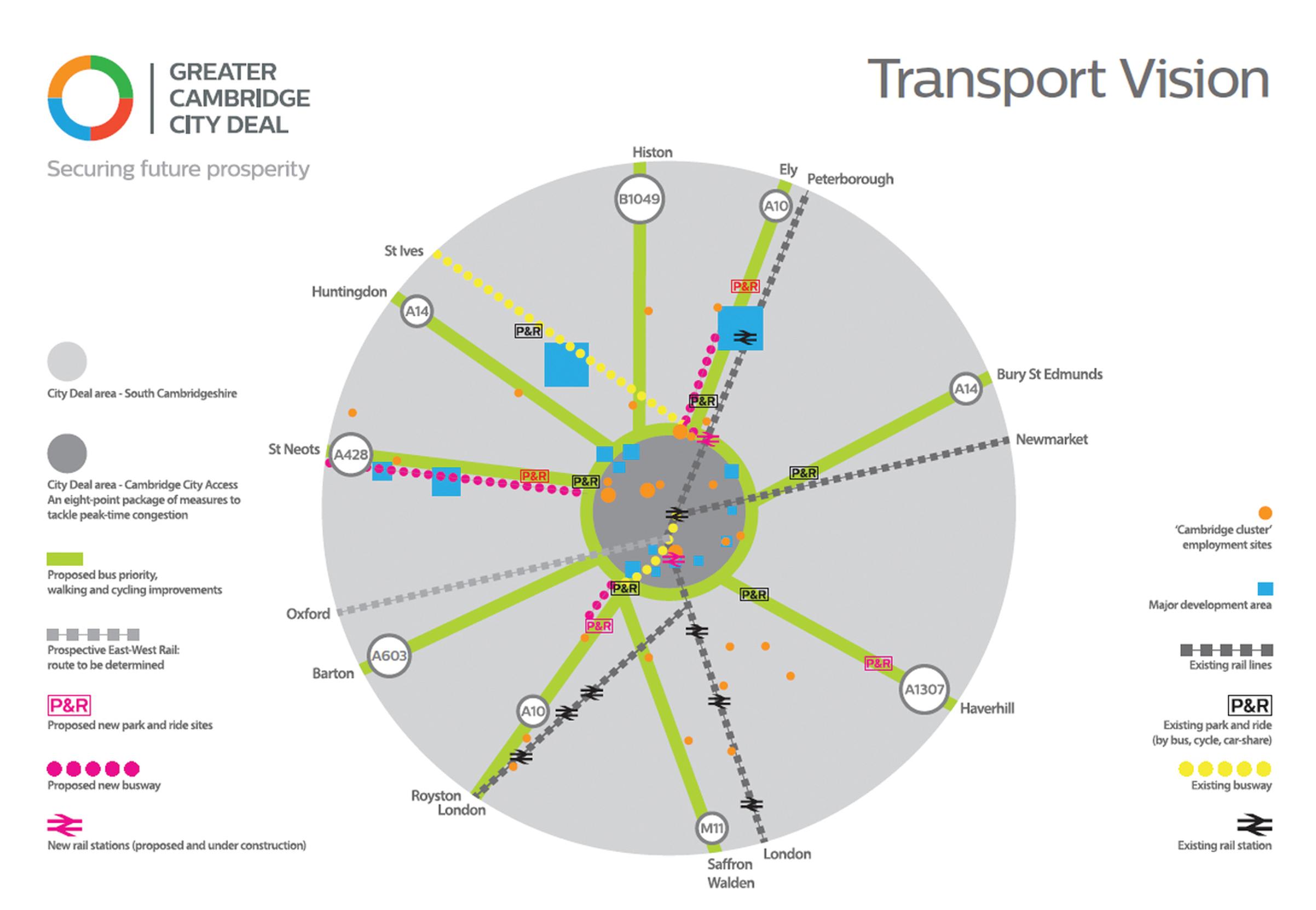 Patronage on the busway continues to grow at around 3% per annum, bucking the trend of reducing patronage on conventional bus services. Busway patronage is expected to get a significant boost in 2017 as a result of two factors:

Firstly, the new Cambridge North Station is now under construction and will open in May 2017. An extension of the busway to the station is already complete and will give direct traffic-free access from the busway to fast trains to London and other destinations, providing truly integrated transport.

Secondly, house-building has at last started at the new town of Northstowe. Northstowe is half-way along the busway and was the original trigger for developing the Busway. Phase 1 will provide 1,500 houses around the Longstanton park-and-ride site. Ultimately, Northstowe will have 10,000 houses with a BRT spine road running through its centre, and every resident will be within easy walking distance of a BRT stop. Phase 2 of Northstowe, which will include the town centre and the BRT spine, secured outline planning permission last summer.

as one of its four main aims, the

delivery of sustainable transport infrastructure to support rapid economic growth in the area.

Cambridge is a constrained historic city that has become a focal point for growth in the 21st century, based around scientific research from the university. The three local authority partners have developed overlapping land use and transport strategies that place much of the new development in a series of new settlements in South Cambridgeshire, beyond the green belt, and thus protecting the historic setting of the city. High quality passenger transport is needed to get people from the new settlements and existing settlements into the city, and to the main employment sites such as the Science Park to the north and the Biomedical Campus to the south.

The City Deal is a fifteen-year programme with money from Government ring-fenced for transport and released in three, five-year tranches (gccitydeal.co.uk). The first five-year programme includes bus priority measures on Histon Road and Milton Road on the north side of the City, which will improve reliability for local buses, busway buses and, in due course, potential BRT services to another planned new town at Waterbeach, north of Cambridge. However, the two most significant projects in a BRT context are the plans for a Cambourne to Cambridge busway, and proposals to manage congestion and reallocate road space in the city centre.

Cambourne is a new settlement that has been developed to the west of Cambridge in recent years. The Local Plan proposals would see it double in size, but it is not currently well-served by public transport. A number of options for putting this right have been considered, including on-road bus lanes and off-road segregated busways. The current recommendation, but subject to approval, is to build a segregated busway to the south of the existing A1303 Madingley Road. This is the more expensive option as it requires a new bridge over the M11 to bypass a significant bottleneck around J12, but is a solution that would provide a dedicated segregated route that will achieve maximum patronage.

The scheme is controversial for a number of reasons. Unlike the existing busway, there is no derelict railway line to follow so a new route will need to be created that will cross a sensitive area of green belt. However the availability of this green wedge does allow a segregated route to be provided to a point close to the city centre. This would be the UK’s first busway not to use an existing or former transport corridor.

There is an existing park-and-ride site on Madingley Road, situated on the city side of the M11 Junction. At this point, drivers have often already been queuing for around 20 minutes and some are reluctant to abandon their cars, so the scheme includes a new park-and-ride further from Cambridge to intercept traffic at the point where the A1303 leaves the dual carriageway A428 and congestion starts.

The next stage of work will be to identify and evaluate specific route options for further consultation next year. If all goes to plan, then we would seek formal powers in 2018, which will probably lead to a Public Inquiry, with construction following from 2020.

Within the city it has been recognised that restrictions on car-use are essential if space is to be freed up for pedestrians, cyclists and buses. An eight-point plan has been developed to tackle this. Key elements of this plan are: peak-time congestion control points, a workplace parking levy and expanded residents’ parking controls. These ‘sticks’ will be accompanied by ‘carrots’ in the form

of improvements to bus services,

more segregated cycle facilities and extensive travel planning work with employers and other traffic generators, such as schools, to encourage more sustainable travel.

The peak-time congestion control points will be a series of bus gates enforced by cameras. These will operate at peak times at six locations that have been selected on two criteria. Firstly, cross-city car movements will be tackled by introducing closure points on the city’s inner ring road and, secondly, bus reliability will be tackled by introducing closure points on the roads where buses suffer the greatest delays; in particular Hills Road, which links the railway station to the city centre. Hills Road is used by the majority of bus services in the city and at times sees buses reduced to walking speed. This scheme will build on the existing Cambridge Core Scheme, which has successfully restricted access to the core of the city centre since 1997.

A key element of the success of this will be the extent to which road users change their habits. There is robust evidence, not least from the Cambridge Core Scheme, that reducing road capacity leads to an overall reduction in traffic, as people change modes and travel habits. The closures are purposely targeted at those trips that can be most readily changed, i.e. relatively short cross city trips, and at positively improving the alternatives through improving bus reliability and delivering better conditions for pedestrians and cyclists. While we can be confident that there will be traffic reduction, forecasting exactly how much is far from an exact science. It is therefore planned to introduce these initiatives using Experimental Traffic Regulation Orders for an 18-month trial period.

Following on from the success of the Nottingham scheme, a workplace parking levy is planned to further discourage car commuting and to raise revenue to support transport improvement, in particular to augment the commercial bus network and to fill in the gaps in the network that may never be commercially viable. Proposals being considered are express services from the ring of market towns around Cambridge and orbital services to major employment sites around the city.

More details of the above and other City Deal plans can be found on the Greater Cambridge City Deal website (gccitydeal.co.uk).

Bob is a Chartered Civil Engineer who has worked for Cambridgeshire County Council since 1988. From 1996 Bob led the group delivering road safety and traffic management measures, including park-and-ride, bus priorities and the successful implementation of the Cambridge Core Scheme. In 2004 Bob relinquished this role to lead the team delivering the Cambridgeshire Guided Busway, which opened in August 2011 and was an instant success with passenger numbers in the first year 40% above the forecast.  Bob is now leading the delivery of a £500m programme of sustainable transport infrastructure projects under the historic Greater Cambridge City Deal designed to ensure that the economic growth of the area can continue while maintaining the quality of life that makes the area so attractive.