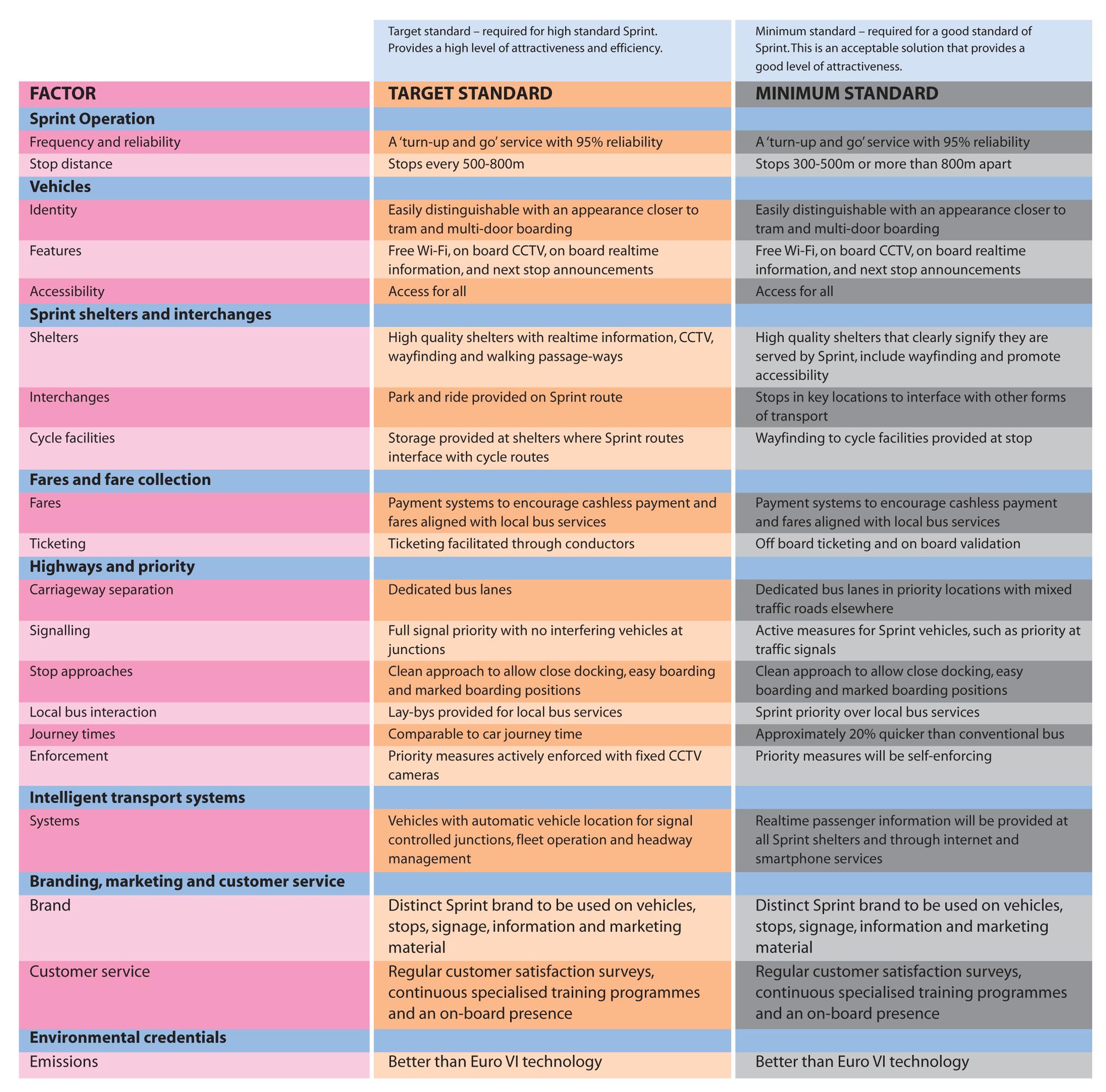 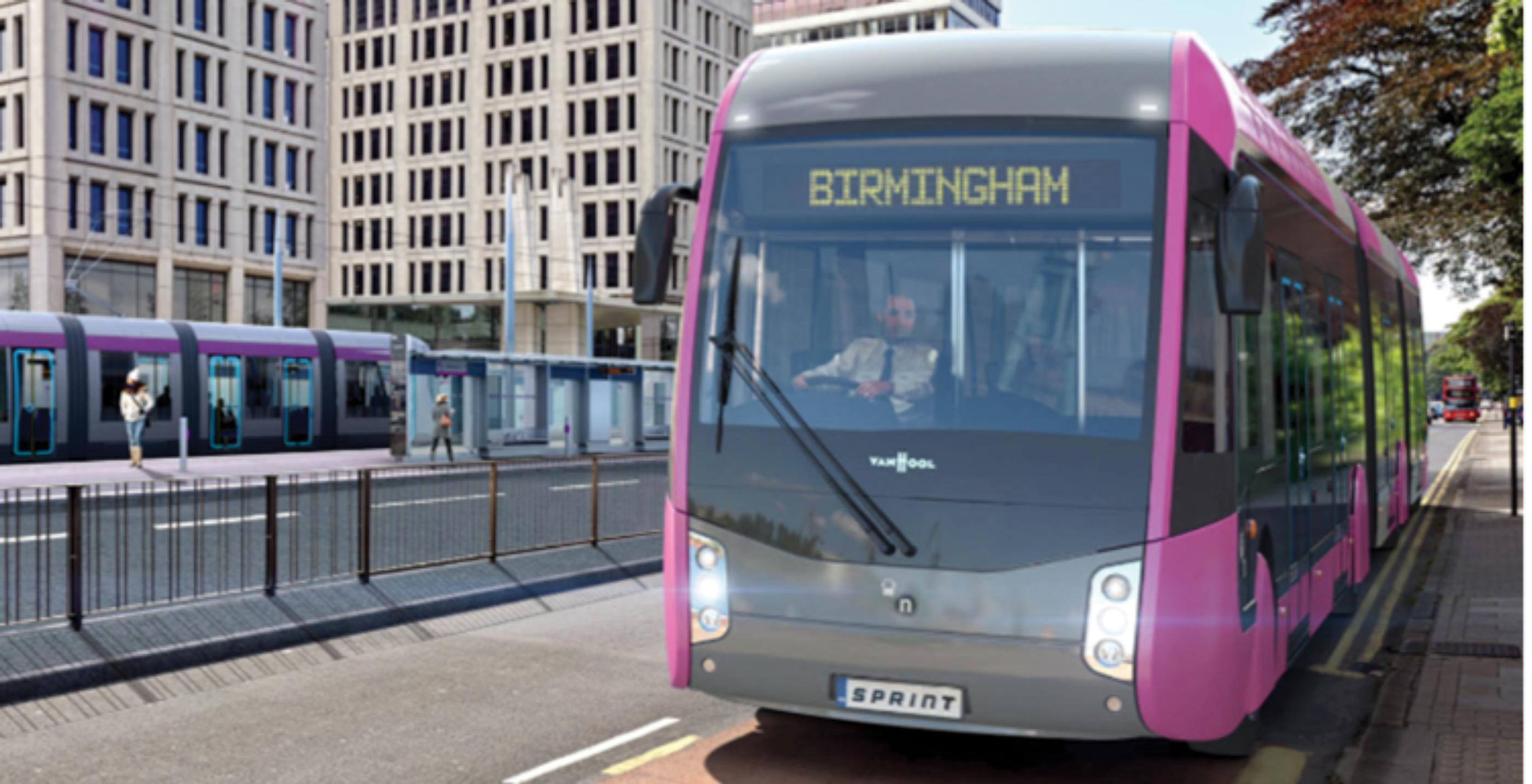 Sprint is part of Transport for West Midlands’ vision for the future network of world-class public transport in the West Midlands. The overall aim of Sprint is to provide a fast and high-quality service which promotes modal shift from the private car to public transport and supports the Strategic Economic Plan of the West Midlands Combined Authority. Unprecedented growth is expected in the region in the next decade, and Sprint will ensure the increased demand for transport can be met. It will form a key part of the rapid transit network in the West Midlands, coordinating elements of its delivery and operation with the Midland Metro tram system.

It has been a year of evolution for Sprint, with important decisions taken to define the scheme and its delivery.

The Sprint Standards were established in March 2016, setting a basic service specification which can be applied to the Sprint network. The standards have been an important step in giving assurance to local politicians that Sprint could deliver the transport step-change required.

The standards were structured according to the key components of Sprint, with specific consideration given to: Sprint operation, Sprint vehicles, Sprint shelters and interchanges, fares and fare collection, highways and priority, intelligent transport systems; including real-time information, branding, marketing and customer service, and environmental credentials. This information was then used to set a minimum and target standard for Sprint routes. For the best Sprint solution, the target standard must be achieved. The minimum standard should only be applied to individual factors when the target level is not practical or economically feasible. It is expected that a Sprint route should achieve the target standard in a majority of factors to provide the step-change required.

The first two Sprint schemes to be delivered are Quinton to Birmingham and Birmingham to the Airport and Solihull. It is now proposed to connect these two routes in the first phase of Sprint, covering approximately 30km of existing roads. This will provide fast and reliable services connecting the east and west of Birmingham, Solihull and key locations of economic and social activity in the region. It will offer a unique, high-quality, cross-city service providing people with improved access to jobs (including two HS2 stations in 2026), hospitals, shops, schools, international travel (from Birmingham Airport) and entertainment (such as the NEC, Resorts World, NIA and Symphony Hall).

Whilst the proposal to link the first two Sprint routes across Birmingham City Centre has delayed the expected delivery of Sprint until 2021, it makes the Sprint offer on these corridors significantly more attractive to users, with numerous advantages:

The scheme will lead to journey times more than 20% quicker than conventional bus; an increase in patronage; an increase in passenger satisfaction; and improvements in air quality. Unsurprisingly, finding an acceptable balance between Sprint, other public transport and other road users has been the biggest challenge.

In addition to the first scheme, initial feasibility work has been carried out on 15 other routes that were identified as potential Sprint corridors. These routes are predominantly to connect strategic centres to the proposed HS2 stations and have been allocated £350m as part of the West Midlands Combined Authority Devolution Deal. The initial feasibility studies will be used to assess the suitability, viability, deliverability, strategic factors and value for money of each scheme in order to prioritise delivery. For some routes that are not suitable for Sprint, and do not meet the agreed standards, it may be that a high-specification core bus route upgrade will be more suitable and beneficial.

The next year is expected to see utility work begin on the first Sprint scheme, the appointment of an operator, further development of new routes and the emergence of a clear network for Sprint. There are ambitious plans for growth in the West Midlands and Sprint’s capability to provide a high-quality service to connect communities to development is at the forefront of Transport for West Midlands’ plans and realising the region’s potential.