A stopgap until the real deal

The government’s £560m Access Fund becomes available from 2017. In the meantime it has announced £20m for active travel projects. 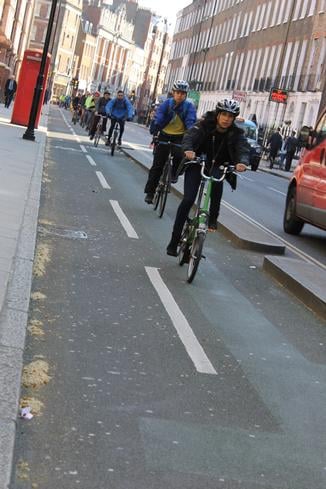 Funding is always a concern in the world of sustainable transport. What was laudable about the £600m Local Sustainable Transport Fund (LSTF), launched in 2011, was that it gave considerable and consistent funding support to schemes that focused on cycling, walking and behaviour change as opposed to road building.

This time last year a major cause for concern among Smarter Travel practitioners was whether there would be funding to secure the legacy of LSTF and provide a platform for the next generation of behaviour change schemes.

The good news came with the Autumn Statement when Chancellor George Osborne launched the Access Fund for sustainable transport. The fund comprises £580m up to 2020, which amounts to £80m revenue and £500m capital.

The Department for Transport (DfT) says the funding would benefit local authorities keen to continue sustainable transport projects that proved successful in the past.

The Access Fund becomes available from 2017/18, but in the meantime the government has announced £20m stopgap funding for active travel projects in 2016/17.

Transport authorities in England, excluding London, are being urged to vie for a share of this £20m to launch schemes that have a particular emphasis on  cycling and walking.

The government says it will look favourably on bids that support its manifesto commitments to double cycling and reduce the numbers of cyclists killed or seriously injured. It will also be seeking schemes that support access to work, skills, education or training, for example, by improving cycle-rail links.

Those most likely to win funding will be ‘ready to go’ schemes, says the DfT.

It points out that bids must include evidence of building on previously successful sustainable transport initiatives. The deadline for applications is 29 March 2016.

Details of how to apply for the remaining £60m of revenue will be revealed later this year. This, says the DfT, will follow the publication of the Cycling and Walking Investment Strategy (CWIS) and after talks with the Department of Communities and Local Government (DCLG) to assess the future approach for the Local Growth Fund.

“The government recognises the important role of Smarter Travel in building the kinds of places people want to work and live,” says the DfT, adding that it is committed to backing schemes that support the local economy, boost economic growth and cut carbon emissions.

The DfT is also hoping to identify the highest “value for money approach” to supporting investment in sustainable travel.

The Access Fund was developed with the support of a range of stakeholders including local transport authorities and organisations such as Living Streets, Sustrans, ADEPT (the representative body for local authorities across the UK), Urban Transport Group (formerly PTEG), Campaign for Better Transport and the Bicycle Association.

Alongside the Access Fund will be the significant ongoing government support for the car club sector and the tranche of investment being made into Intelligent Mobility initiatives such as autonomous and low emission vehicles.

Discuss this at Smarter Travel LIVE!