The uTRAQ project in the east Midlands is seeking to advance real-time traffic management with the specific goal of reducing air pollution. With air quality and traffic management considered high priority policy issues for both central government and local authorities, a key strength of the system is its modular nature and ability to interface with existing and future advanced traffic management systems. 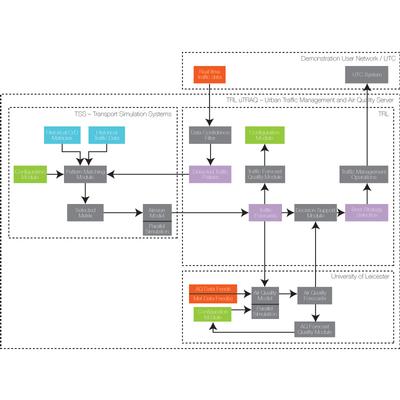 Developed under the Advanced Research in Telecommunications Integrated Applications 20 Programme , the uTRAQ project aims to:

The uTRAQ system integrates software components that enhance an existing UTC system, in this case SCOOT, in order to allow the optimisation of traffic signal timings for both improved air quality and traffic flow, instead of just for optimal traffic flow.

Traffic data, air quality data and meteorological data integrates with a modular traffic management system that collects, filters, processes and analyses the data feeds in the coordination of the following process:

A key feature of the project is its use of the latest air quality and traffic software models to generate test strategies: TSS’s Aimsun Online is the real-time, simulation-based traffic prediction module providing live forecasts for upcoming traffic conditions, while the University of Leicester team is  providing the air quality (AQ) module, which will identify AQ data feeds and generate real world forecasts, ‘now-casts’ and emissions profiles from the traffic model for each test strategy. This combination of feeds will enable uTRAQ to identify points, routes or areas where AQ is a problem.

Air quality forecasts for a given urban area need to account not only for traffic emissions, but for local non-traffic sources such as factories, and regionally imported pollution (‘background levels’ that may occur due to local geography and weather patterns). Regionally imported pollution is difficult to estimate, being dependent upon complex meteorology and emission profiles and requiring Earth Observation data to assess regional meteorology and atmospheric composition. uTRAQ uses the Monitoring Atmospheric Composition and Climate (MACC) service to assimilate a substantial number of data products, including wind-vectors, temperature, pressure, and ozone as well as a range of data from observation satelites. Assimilated data is then used to model the dynamics and chemistry of atmospheric composition and deliver a surface-level concentration of pollutants, particularly nitrogen dioxide. For many medium-sized cities and towns, the proportion of imported pollution adds greatly to regulatory levels and so local abatement strategies need to adapt rapidly to external influences, making the background pollution import information invaluable.

A decision support module enables the integration of the overall system allowing the user to define local priorities when identifying strategies and to test the strategies to identify the optimal solution. The uTRAQ system recommends an optimal strategy to use but shows the user possible alternatives – this is the key operational principal of the decision support module. A range of performance indices (PI), which are user-defined metrics, will be generated as part of this process, based on traffic and air quality. In the case of journey time or predictable and consistent trips, the PI will provide feedback on strategies, allowing the assessment of whether a strategy is expected to improve or worsen the real world situation in comparison with current traffic operations and air quality.

One of the key differentiators from earlier efforts in this field is the direct interaction between the traffic model and the existing SCOOT network, with the current state of the network forming the starting point of any traffic simulation and scenario testing in conjunction with the air quality model with a rapid turnaround time.

Differentiating uTRAQ from the previous iterations is the existence of full UTC integration. In the demonstration project, the system will run in a live environment, operating under supervision, where the traffic management operator is advised of a strategy, which can then be manually entered into the UTC, via the Common Database; alternatively uTRAQ can push the strategy to the Common Database with minimal user intervention. In short, the demonstration will be capable of operating in a supervised or fully autonomous manner, providing strategies to the UTC system that will directly affect its optimisation calculations, and thus taking effect on-street.

The existing UTC system however always retains overall control of the traffic control infrastructure, continuing with its second-by-second optimisation, with the higher-level strategy recommendations from the uTRAQ system, which will influence longer-term optimisation trends. This ensures a failsafe in the event of a system failure or loss of connection to the service.

Over the course of the next year, the uTRAQ system will be tested at three locations, each testing the system on a progressively larger scale. The first of these is in cooperation with Leicestershire County Council and involves the A6 corridor (London Road) from Ashtree Road in Oadby to the Victoria Park roundabout. The A6 approaches the city from the south east and is considered one of the busiest stretches of road in the county. The second test site is Northampton, where the uTRAQ team will model up to 66 road junctions, most of which have SCOOT, and can use GNSS data from the City buses to fine-tune performance. The final test site is in Leicester City, itself including some adjacent sites in the County, with control available through122 controlled junctions with access to intensive AQ monitoring facilities and data such as Airviro. Leicester has the worst air quality in the UK and the 9th worst in the EU (in terms of numbers of days exceeding minimum acceptable levels), so this will prove a demanding test.