A city fit for the 21st century

The Lewes Road scheme shows how a bleak dual carriageway can be transformed into a sustainable transport corridor, writes Ian Davey 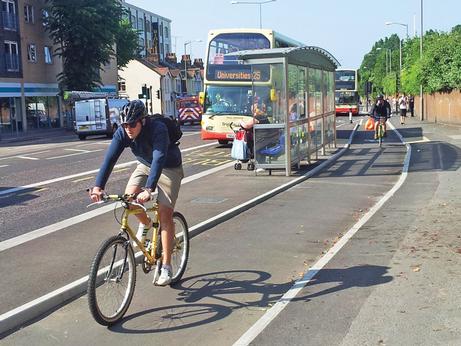 Brighton & Hove is becoming a city that is safe and pleasant place for everybody to travel around, whatever their age or mobility and however they are travelling. Young or old, able and less able, whether they are walking, cycling, using public transport, driving or scooting to school: all have a right to a transport system that works. That is our ideal.

As our city becomes ever more popular, the pressure on our transport infrastructure increases while our road space does not. In a densely populated city situated between the sea and the South Downs National Park (SDNP), road building and widening or constructing edge of city park & ride facilities are not deliverable options. We need to be smarter about how we use every bit of valuable space that we have.

The LSTF-funded Lewes Road scheme gave us the opportunity to do just that. We transformed a bleak urban dual carriageway with parked cars and speeding traffic into a true sustainable transport corridor with dedicated lanes in each direction for pedestrians, cyclists, buses and taxis alongside a single general traffic lane.

The changes included creating island bus stops that eliminate the conflict between buses and cyclists. Together with the SDNP, we improved walking and cycling links into the National Park, worked with Sustrans in local schools, and talked to students at the universities, employers and local communities to better understand their transport needs and see how we could help them make smarter transport choices. Our initial monitoring has shown increases in bus, bike and taxi use, while general traffic has decreased. Interestingly, more people travel along the Lewes Road by sustainable means than by private car.

While we still have a long way to go, we are making good progress toward our vision of a city with transport fit for the 21st century. More people are choosing to walk, cycle and use public transport while car dependency is decreasing. Most importantly, fewer people are killed and injured on the roads of our city.

Technology will be key in the future. In addition to real-time bus information, multi-operator smart ticketing and travel apps, we have a burgeoning City Car Club, which we aim to complement with city bike sharing as transport leads the way into the new sharing economy. With the potential for all public transport (buses, trains, car and bike share) to be accessible by the same smartcard residents will have real transport alternatives to owning and running their own car.

The future of transport is an exciting one. We can put our efforts into repeating the mistakes of the past by building more roads for more cars, or be a bit smarter and concentrate on public transport and active travel. My preference is for the latter.