Designer with an enterprising vision 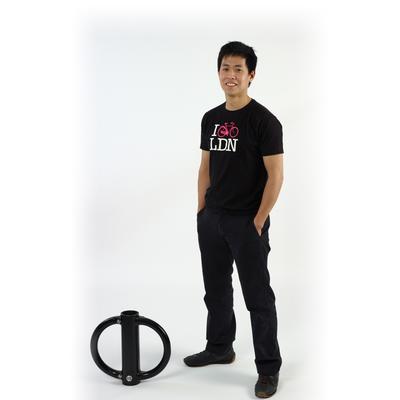 Anthony Lau is founder of Cyclehoop, the firm of designers and architects that specialises in cycle infrastructure. Having earned a first-class degree, MA and post-graduate diploma in architecture, he took first prize in the Reinventing the Bike Shed competion in 2006 for his Cyclehoop bike parking design, won a WestFocus Bright Ideas award for the best student business pitch and reached the finals of HSBC's Unipreneur awards. The cash prizes and business support from these awards helped Lau to set up his company, initially from his bedroom.

The business has since seen steady growth, and now offers a range of cycle infrastracture products, including the Armadillo traffic separator. Cyclehoop has grown to a team of 20 and now has 56 local authority clients across the UK.

How did you get started as a cycling infrastructure designer?

I used to work as an architect and have always had a passion for cycling, so I combined the two to start my company Cyclehoop. I have been designing cycle infrastructure for the past eight years.

What was your first innovation, and how did you come up with the idea?

A few years ago I had my bike stolen. It was locked to a signpost but the thief simply lifted it over the top of a pole. This inspired me to design the Cyclehoop which prevents this problem, as well as being an easy and low cost solution for providing bike parking in cities. The idea subsequently won the ‘Re-inventing the Bike Shed’ competition and the rest is history.

When did you set up your own business and why?

Despite winning an international design competition, there was still a long way to go from turning an ‘idea’ into a commercial product.

I was told by many that the product would not go very far and I should not waste too much time on it. However, I had done my research and knew that this product would work.

I then started a company from my bedroom in 2008 and began making and selling Cyclehoops to councils. I’ve since designed and marketed over 20 products, so having my own business has been a great vehicle for making it happen.

Do you see yourself first and foremost as an entrepreneur or a designer?

Designers who have also created great businesses such as James Dyson inspire me. It is, of course, important for a product to have both a good design and a sound business plan behind it.

Therefore, not only do you have to be creative to be a designer but also creative when building your business. I predominantly see myself as a designer, but being an entrepreneur and having a good business approach is crucial for running the company.

What inspired you to develop Bikehangar?

Many who live in houses and shared flats find it difficult to store their bicycles safely indoors. We wanted a solution that could securely park your bike right outside your house. If you can park a car outside why can’t you lock your bike securely?

We worked closely with Lambeth Council to develop the Lambeth Bikehangar. It takes up less space than a single car, but by taking away one car space you can provide secure bike parking for six users. We want to encourage more people to cycle and drive less, and this product sends out a positive message.

Why do you think that authorities such as Lambeth have embraced the Bikehangar concept?

The council wanted to create a residential cycle parking rental scheme along with an efficient management system for their hundreds of users. They have helped remove one of the key barriers to cycling in the borough – the lack of suitable bike storage space.

Installing a Bikehangar is quick, cost effective and space saving. By replacing car spaces with multiple bike spaces, it helps to reduce the number of cars required, encourages people to cycle and hopefully reduces parking congestion, which will improve our street environment.

What sort of environments are suited to the Bikehangar?

They are designed to be strong and robust, and are predominately installed on residential streets. However, they are also installed inside housing estates, in courtyards or for businesses. The design has a low profile allowing it to fit in anywhere with minimal visual impact.

Additionally, trees can be planted and planters installed alongside Bikehangars to help with traffic calming and to add greenery, helping to improve the surroundings.

Why did you decide to market the Armadillo traffic separator?

Cyclehoop attended the Velo-city show in Seville in 2011. The Velo-city conference serves as the major global platform for the exchange of knowledge, expertise skills and good practice on cycling as part of daily transport. While we were there we saw an original version made completely from concrete and were intrigued. Last year we were approached by the manufacturers to introduce it to the UK. We saw there was a gap in the market and, noting that 100,000 had been installed in 38 cities successfully, thought it would be a great addition to our products for cycle lane safety.

Can you give examples of where it has been successfully installed in the UK?

Our first project was for the London Borough of Camden on Royal College Street, which was incredibly successful. Introduced last year as a trial by Camden Council, the scheme has been a success and will be expanded. Latest data from the Royal College Street cycle lanes shows an 111% increase in cyclists since the upgrade and 54% since 2013. We have since  installed Armadillos in Salford and Southampton, with plans to trial them in a number of UK towns and cities throughout 2015, including Barking & Dagenham, Ealing and Dublin.

What is your vision for taking the company forward?

We want to establish the company as the most innovative designers of cycle infrastructure in the world! We have started exporting products as the demand for cycling products worldwide has increased. Therefore, it would be ideal if we could export to more and more countries, which is a vision for the future influenced heavily by our strong support of manufacturing in the UK.

Not only this, but we want to keep working on new designs for solutions to cycling problems that people face daily, for instance issues tackling safety and security. We want to continue our work in encouraging people to cycle by making it easier and more accessible.

What will it take to get more people cycling in the UK?

Unfortunately, the UK is way behind Europe in terms of cycling. Statistically, only 2-3% of people in the UK say that cycling is their main mode of transport compared with a huge 31.2% in the Netherlands. One major factor in encouraging people to cycle here lies within infrastructure. I believe the UK needs to work on improving not only cycle parking but also to incorporate more cycle infrastructure such as public bike pumps and ramps at staircases; both of which are commonly seen around Europe.

The government can play a key factor in making this happen by advocating cycling and putting funding into it, but also successful cycling sport stars and fashion play a huge role in influencing people’s attitudes. For example, after the UK’s success in cycling in the Olympics, we saw a big surge in people taking up the sport.

People often think that the UK’s roads are not built for cycling - I believe they need a lot of investment to bring them up to the rest of Europe’s standards. All of these factors will enable a change of attitude among drivers, pedestrians and cyclists, as we need to learn to share the road and make best use of our infrastructure.

And how can innovators such as you contribute?

I want to keep coming up with new ideas and solutions to both benefit those that already cycle and encourage those who don’t. Therefore, I aim to work with councils, transport engineers and designers to implement them.

At Cyclehoop we create fun, funky street furniture, which we put a lot of thought into to help inspire others to do the same.