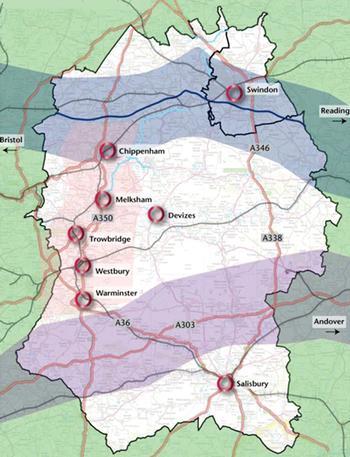 Swindon and Wiltshire Local Enterprise Partnership (SWLEP), like many other LEPs, has had to be reactive to the requirements of central government. This means often having to meet challenging timescales, with a clear emphasis on bringing forward ‘shovel ready’ schemes to deliver economic benefits. As such, it is not surprising that the lion’s share of the prioritised schemes have been made up of highway improvements. Many are closely related to facilitating new development, being comparatively uncontroversial and uncomplicated schemes, with reasonable prospects for securing local contributions.

However, many LEPs are now finding that since completing the prioritisation exercise for their major transport schemes, it has become apparent a greater proportion of the funding will be accessed competitively through the Single Local Growth Fund – a pool of funding previously channelled through Department for Transport (DfT), the Homes and Communities Agency (HCA) and the Department for Business, Innovation and Skills (BIS). The Strategic Economic Plan has, in effect, become the bid document for this additional funding, supported by appropriately scoped business cases.

It is increasingly apparent that those authorities with the most considered plans and best developed evidence base are more likely to be the winners in future funding competitions. Yet a key aspect to any strong funding bid is the strategic case put forward for the scheme, which must make clear the role of the scheme as part of a wider strategy. It must be shown to address agreed objectives, and ultimately play a part in achieving the wider vision for the area. Transport is, after all, a means to an end and by mapping transport corridors onto economic growth clusters this will ensure that economic benefits are realised.

What has been lacking to date has been this wider transport vision at a LEP level, and there is an increasing recognition amongst LEPs of the need for an overarching vision or strategy document, developed in synergy with emerging Local Plans and existing local authority transport strategies. It is at this level that LEPs should be beginning to draw together their wider strategies, across the full spectrum of transport interventions, including sustainable transport and demand management measures.

In Swindon and Wiltshire the LEP is developing and articulating their Transport Vision for 2025, which will adopt a holistic and integrated approach that not only supports the LEP’s aspirations for economic growth, inward investment and job creation, but also reflects the local transport priorities for Swindon and Wiltshire. This will entail collating, reviewing and ‘knitting together’ the various scheme proposals, including the nationally promoted road and rail schemes, to create an overall holistic vision for transport that is consistent with the social, economic and environmental goals of the partnership area.

Swindon and Wilshire occupy a pivotal economic location in Southern England and benefit from geographic proximity to key airports and coastal ports. As such, critical to the success of their economy is the east-west connectivity afforded by the M4 motorway and Great Western railway. The proposed enhancements to improve journey times and ease local bottlenecks will therefore be key elements of the vision.

For the Swindon urban area, the Transport Vision will draw together the reasonably advanced proposals to ease congestion through targeted highway improvements, better accessibility for all transport modes and by connecting the proposed urban extensions with a rapid transit system. There will also be an emphasis on improving access to the M4 via junctions 15 and 16 and reducing unnecessary through movements.

However, in addition to the all of the above, the SWLEP will be investing heavily in healthy and environmentally friendly modes of transport, with transport playing its full part in reducing greenhouse gas emissions. It will also be promoting active travel through Door2Door strategies with rail stations being used as transport hubs and smart ticketing utilised on bus/rail corridors. We will also ensure that streets are appropriately designed for their functions, with an emphasis on encouraging walking, cycling and public transport use with a high quality public realm and improving local air quality.

By adopting this holistic approach, the SWLEP are confident that by 2025 not only will social and environmental goals be met but economic benefits will be optimised by investing heavily in sustainable transport and a balanced programme of Infrastructure improvements.