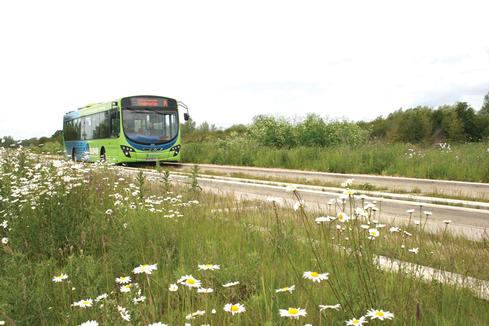 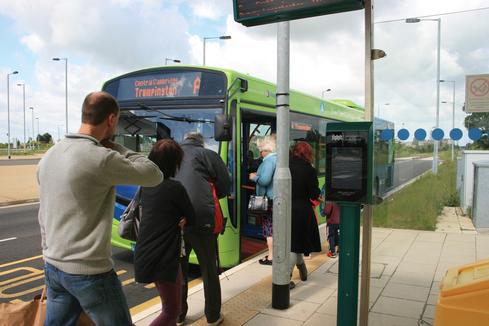 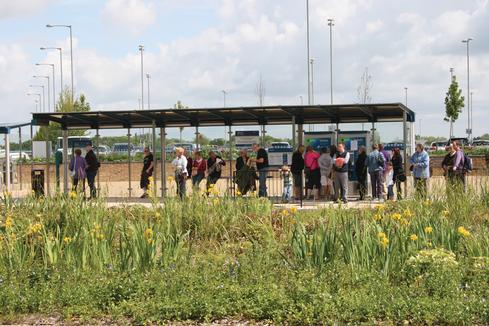 The Cambridge busway celebrated its second birthday on 7 August 2013 with passenger numbers still well ahead of forecast.  The busway services carried over three million passengers in its second year, 20% up on its first year, and there is no sign of the growth tailing off.  In its first year passenger numbers were +46% on the projected ridership and +20% in the second year. This is fantastic news and demonstrates how well received the busway has been.

The busway is the longest in the world and is providing real travel choice in the Peterborough, Huntingdon and Cambridge corridor. The busway opened in 2011 with an initial service frequency of seven buses per hour throughout the day.  From the start extra buses were needed at peak times. During 2012 the service frequency was increased to nine buses per hour. Between 7:30 and 8:30 there are now fifteen departures from St Ives towards Cambridge to meet demand. Before the busway opened there were just five buses heading off down the heavily congested A14 for Cambridge in the same time. This early success is underlined by the expansion of the St Ives park-and-ride site from 500 to 1,000 spaces within two years of the opening of the busway.

The busway is operated by two operators: Stagecoach and local family firm Whippet. All the buses are run commercially and the operators pay an access charge per bus that covers all the operating and maintenance costs of the busway.  This means that the busway costs Cambridgeshire County Council (and its council tax payers) nothing to operate and run.

The guided part of the network is in two parts and is linked by on road running through Cambridge. The network can be viewed at: www.cambridgeshire.gov.uk/transport/around/usingbusway/buswayroutehuntingdon.htm

The busway links existing centres of population, education and training and employment. Critically it is already in place to support the transport needs of residents in 25,000 new homes and the employees of the 15,000 new jobs that are being delivered within the corridor. It is critical in unlocking the development of the new town at Northstowe (10,000 new homes and a resident population of around 25,000 when built out). The first phase of development at Northstowe will provide 1,500 new homes and will be built adjacent to the Longstanton park-and-ride site. In future, when the new town is complete, there will be a dedicated busway loop right through the town putting every house within easy reach of a stop.

The benefits in journey time and reliability are attractive to the millions already using the busway and will be key in attracting new customers form the significant strategic development taking place in the CGB corridor. The busway services serve two existing railway stations at Huntingdon and Cambridge, providing convenient and comfortable alternatives to the car to access the rail network.

The busway will also take rail users direct to the new Cambridge Science Park Rail station that is due to open in 2015. The station will provide a huge boost for the local economy, and will kick start development and the creation of jobs by significantly improving accessibility.

The new station will have fast trains to London every half hour, putting the Science Park Within an hour of Central London. The busway will be extended to run directly into the station with a dedicated stop and turning area. The interchange is planned around a station square reminiscent of a College Court, with cycle parking, busway terminal, car park, drop off area, taxi rank and the station entrance itself all arranged around the square.

The busway is now well established as a success and the potential for expansion of the (physical) network is featuring in longer term planning. The county council is currently consulting on a new transport strategy for Cambridge and South Cambridgeshire to mesh with the city and districts plans for new development. The strategy proposes new busways: north to serve a proposed new town at Waterbeach, west to serve existing and new developments in the St Neots corridor and south east to link up Addenbrooke's and Haverhill via the Babraham Research Institute and Granta Park Science park. All of these proposals will be supported by improved bus in the key transport corridors within Cambridge City. On a more local level the boosting of visitor numbers to the market town of St Ives has been facilitated by the busway.

The funding for the construction of the busway was split 80:20 between Government grant and contributions from new development such as at Northstowe and the southern fringe of Cambridge city. Historically public transport infrastructure has often followed development, but Cambridgeshire County Council wanted to make sure that this important public transport infrastructure was in place as the start of the developments.

The council therefore committed to borrowing ahead of the receipts from new development to ensure the busway was delivered ahead of the strategic development. Planning agreements (S106) are in place to cover much of this £20m and further planning agreement are in the pipeline. The agreements also cover the cost of the prudential borrowing the county council has undertaken to forward fund the CGB delivery.

Cambridgeshire County Council has taken a similar initiative to get the new Science Park Railway Station built and has committed to borrow the money to pay for the station. The council will be repaid by the train operators out of the extra revenue from the additional train passengers. The station is being planned by the same team who delivered the busway. A planning application was submitted in June and if all goes to plan a start on site will be made in 2014 with the station becoming operational at the end of 2015.  Current thinking is that the station will be served by a new ten minute frequency service CGB service from either Northstowe or  St. Ives.

Earlier this year the new Medical Research Centre was opened by HM the Queen at Addenbrooke's Hospital. We were very pleased that her majesty took the quickest route from Cambridge station to the hospital and had her first ride on a guided bus. The pharmaceutical company Astra Zeneca recently announced it was moving its headquarters to the Addenbrooke's Medipark, citing the busway among its many reasons for choosing Cambridge. Since opening the busway has drawn a wide range of national and international visitors including from China, Sweden and Germany.

The busway scheme was widely consulted upon prior to the submission of the application for a Transport and Works Act Order. Over 2,200 questionnaires were completed and almost 1,800 people attended exhibitions to find out more. Some key design features were changed as a result of this thorough consultation; an excellent example is the reduction to a single track of the guided section in Trumpington to provide the cycleway linking the Trumpington park-and-ride site to Addenbrooke’s Hospital.

The county council works tirelessly with a range of key partners in relation to the busway. Key partners include three district councils, the Environment Agency, Network Rail, Addenbrooke’s Hospital  Cambridge and bus operators. It was crucial to work with key developers along the route of the busway. Land needed to be secured to allow the implementation of the scheme. Detailed discussion was necessary to ensure a design that complemented the aspiration to deliver new housing and employment opportunities and not to frustrate these opportunities.

The busway is heavily used by cyclists, pedestrians and equestrians.  It accesses the picturesque Fen Drayton lakes, which is also a request stop for busway services. The access to open space including when walking, running or cycling can be an important contributor to an individual’s well being.

The busway has three park-and-ride sites at St Ives and Trumpington  the (terminal points of the system) and also at Longstanton.  All stops on the guided section have cycle parking and high specification ticket machines.

The busway uses a range of technological innovations including smartcard ticketing, comprehensive real time bus information and free-wi-fi on board the buses themselves. Smartphone technology also allows busway passengers to see, in real time, the next service due at their local stop. Smartcard means quicker boarding and hassle-free journeys, whereas wi-fi on board allows commuters to use laptop computers to catch up on e-mail and other tasks.

An excellent start to the life of the busway was capped in October 2012 when the county council was awarded the winner of the ‘Most Innovative Transport Project’ category for the Cambridgeshire Guided Busway at the 2012 National Transport Awards.