Pedestrian Modelling - A mass in motion

Simulating the behaviour of individuals is becoming an increasingly important part of any project and a relatively new consideration is that it should fit in to the BIM process, which calls for 3D modelling capabilities, such as those found in Oasys’ MassMotion software, 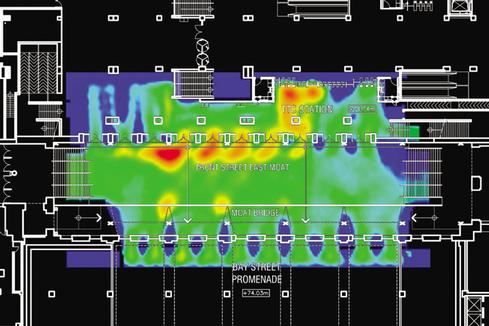 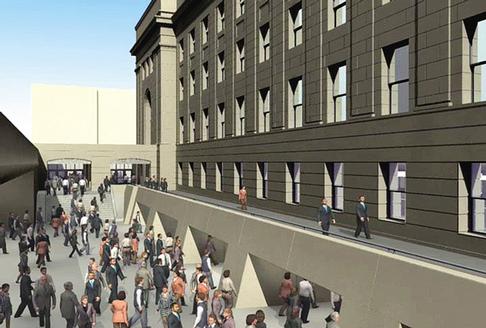 How do people navigate through a building, a train station or an airport? What happens when you need to evacuate an area, or if a number of exits have to be shut for various reasons? Will the occupants still make it out safely?

Union Station is Toronto’s busiest transportation hub. Situated in the downtown district, it is the main terminus for the regional rail network and has a connection into the city’s streetcar and subway networks, as well as a gateway into the city’s system of underground walkways that link shopping, services and entertainment.

Union Station has been designated a National Historic Site of Canada since 1975; yet its future was only secured when, in 2000, the City of Toronto purchased the station building while railway operator GO Transit acquired the railway corridor and the Union Station train shed. The massive redevelopment now underway includes a redesign of the lower floor levels in the east and west wings of the station building. There has been the addition of a second subway platform, the renovation of the historic train shed roof and the addition of a new retail level below the existing concourse. Each of these three projects individually would represent a major upgrade to the facility. Taken together they will significantly increase the efficiency of passenger movement while also increasing convenience and improving travellers’ user experience. The anticipated completion date is 2016.

Due to the predicted increase in passengers at what was already a very busy location, it was clear to the city that the historic station building required refurbishing, its passenger handling capacity needed expanding and the surrounding streets needed improving to make them safer and better for both pedestrians and cyclists. The City of Toronto’s master plan was adopted in 2004 and Arup was awarded the contract to assess the pedestrian flows through Union Station during refurbishment and in the predicted conditions of 2021, thus informing and supporting the planning and design of the revised station.

The first phase of the project was to survey the peak pedestrian conditions in and around the station and to use these to create quantitative forecasts for passenger flows during renovation and in 2021. This analysis focused on the peak hour and peak 15-minute pedestrian volumes during the morning and afternoon, plus special events at the Air Canada and Rogers Centres. The study revealed a number of opportunities and constraints for the refurbishment project, as well as informing the second phase, which was for detailed pedestrian simulation of the station to check pedestrian flows and inform the best locations of retail, commercial and transit-related facilities.

This planning study involved the creation of agent-based simulation models of the station and surrounding streets. To ensure that the model results were accurate, the current conditions in the station were modelled using the survey information from the first phase, including minute-by-minute breakdown of where the pedestrians enter the study area (origin) and where they are heading (destination). Each agent was assigned a train platform either as an origin or destination, with distribution based on the train schedule. The resultant pedestrian model was then calibrated against actual flows within the station and adjusted so that the analysis was consistent with observations.

This model was then modified to analyse the 2021 predicted passenger flows and to also check each stage of the refurbishment to ensure that the station would continue to function while the rebuilding work closed off parts of the concourses.

Having previously tried the existing pedestrian modelling packages on the market and found that they were insufficient for their purposes, Arup had commissioned its software house, Oasys, to create its own programme, MassMotion, to address the shortcomings. Key features of MassMotion are intelligent agents, a full 3D model of the environment, and the adoption of John Fruin’s industry standard planning and design guidelines for pedestrian behaviour.

The principle differentiator between MassMotion and other pedestrian simulation tools is that it models pedestrian behaviour rather than tests a user’s preconceptions about pedestrian behaviour: it is non-deterministic and emergent. This means that the individual agents in the simulation make their own choices about appropriate actions, based on the dynamics of their environment and how their actions affect other agents. For example, if a room has doors on all four sides, other pedestrian simulation tools require the user to input what percentage of the population of the room will use each door. In a MassMotion simulation each agent decides which door to use based on what it knows about the distance to its goal and how long the queue is for each door.

There are two particularly noteworthy advantages to such a system:

The 3D environments can be created using a wide range of modelling tools and can be imported direct from BIM models.

The information contained in the models is used to create MassMotion assets representing the walkable areas of the environment, plus solids representing obstacles within them. The walkable areas are further broken down into circulation spaces such as floors, pavements and platforms, and into connection elements such as doors, stairs, escalators, etc.

The arrangement of circulation areas and connection elements forms an implicit network, defined by geometric proximity, which defines possible route permutations for the simulation agents to navigate. For the Union Station environment, the platforms and station were modelled in detail, while the network of adjacent streets and walkways were modelled within the same file in a more abstract fashion.

After extensive simulation of the proposed concept plan, Arup concluded that its proposed configuration would support the estimated pedestrian volumes for 2021. Also, while there will be some areas that experience high densities of commuters during the morning peak 15 minutes, the traffic should continue to flow. Likewise the external pedestrian routes were providing sufficient capacity with just a few exceptions. The model also revealed some underused areas within the station. By adjusting stair, retail and service locations, the team developed layout modifications to improve the balance of flows as well as the user experience.

“The pedestrian planning initiatives at Union Station have broken new ground for the way the city of Toronto will plan for pedestrian activities in the future,” said Tim Laspa from the Toronto City planning department. “From a modelling and simulation perspective, the Phase 2 study was an exceptional test of the MassMotion toolset that Arup has developed. The very high volumes of pedestrians being simulated in combination with the complex layout of the station facility demonstrated the usefulness of an agent based approach to pedestrian simulation and analysis.”

Following on from this simulation work at Union Station, and using lessons learned, Oasys has made MassMotion commercially available and continues to improve its market leading software through enhanced model creation tools, BIM interfaces, and additional functions such as evacuation events for fire engineering.