With temperatures set to pass 40 degrees, the ability, or more properly inability, of UK’s transport infrastructure to cope with extreme heat has been underlined 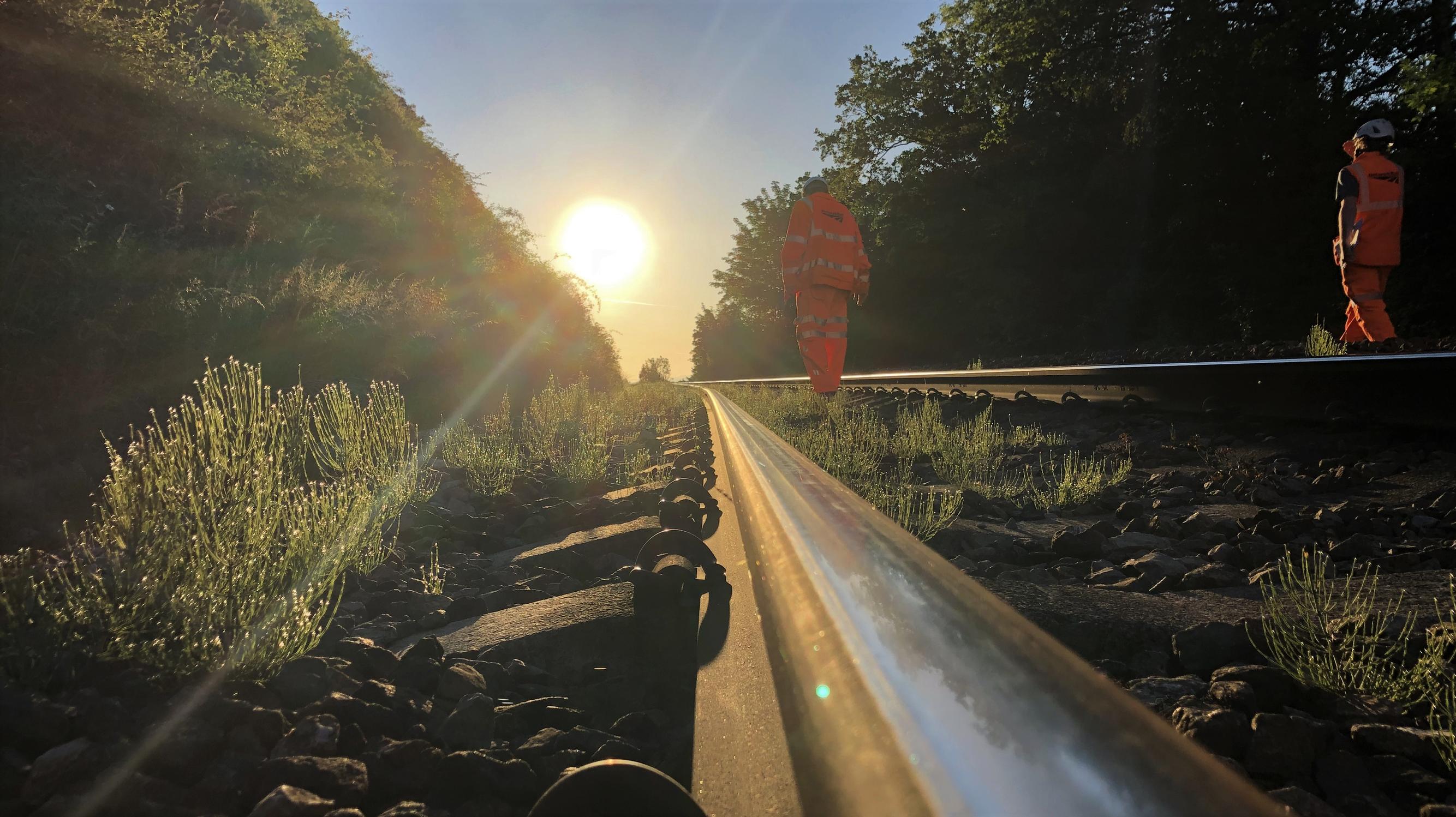 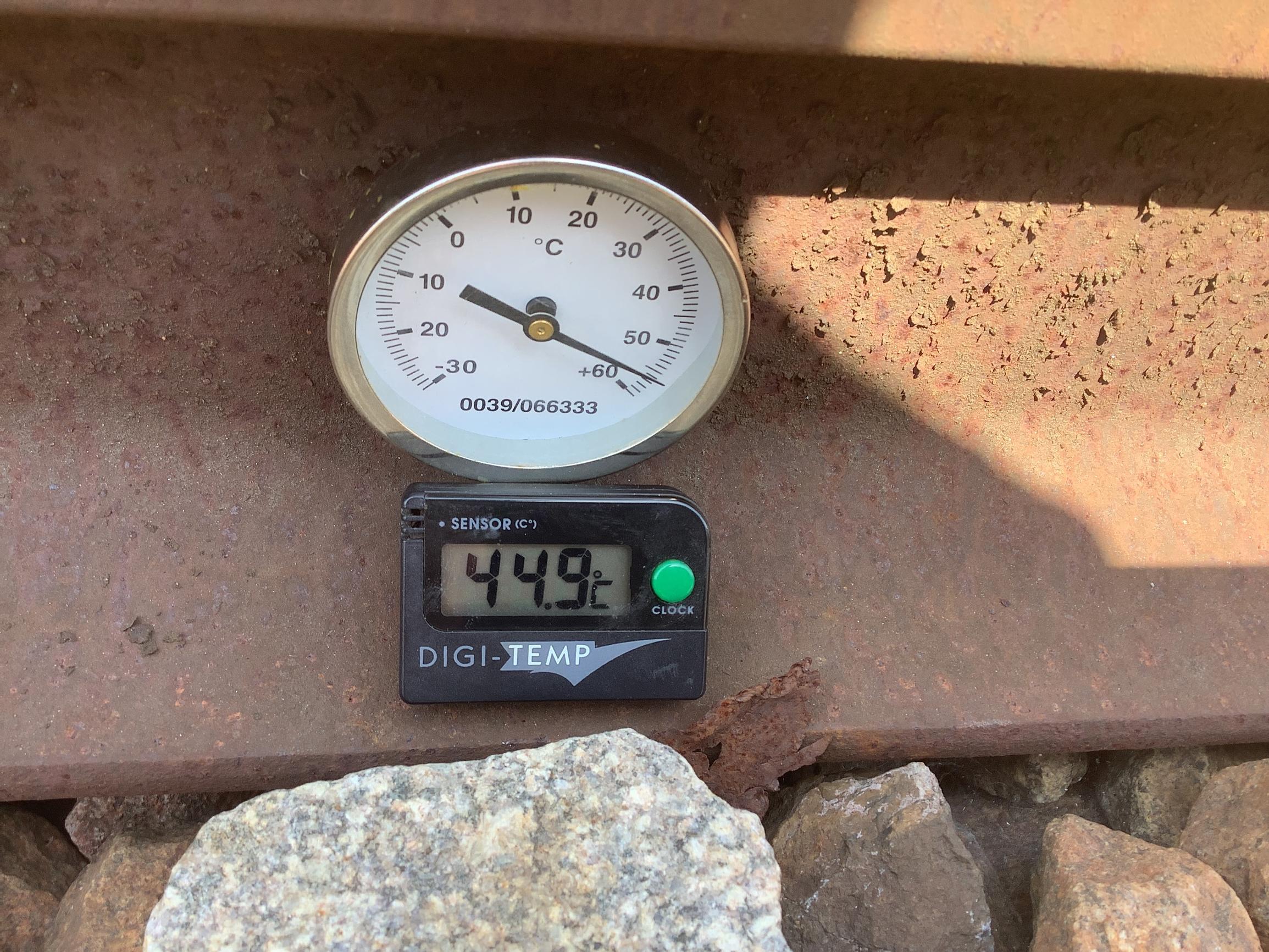 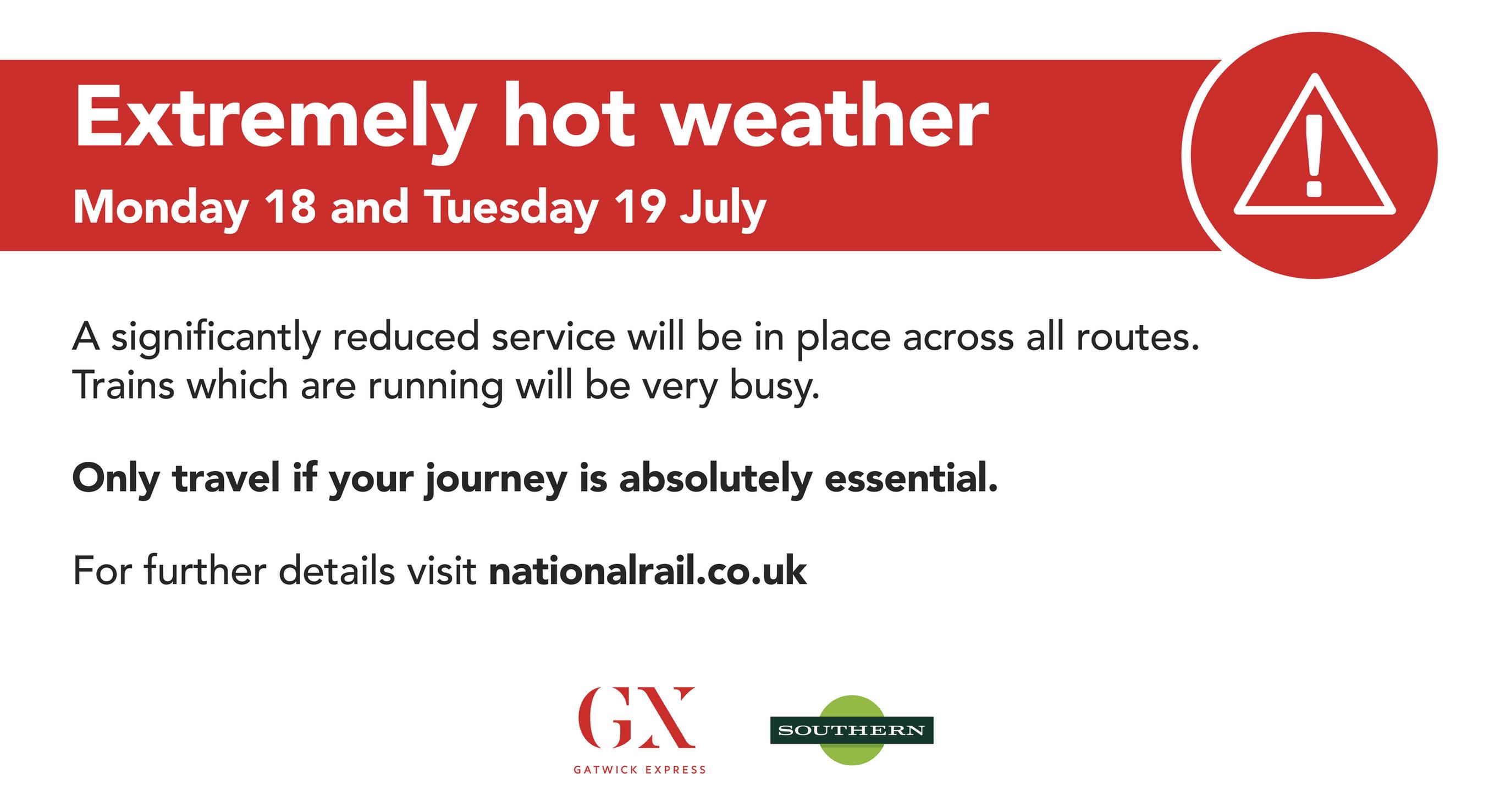 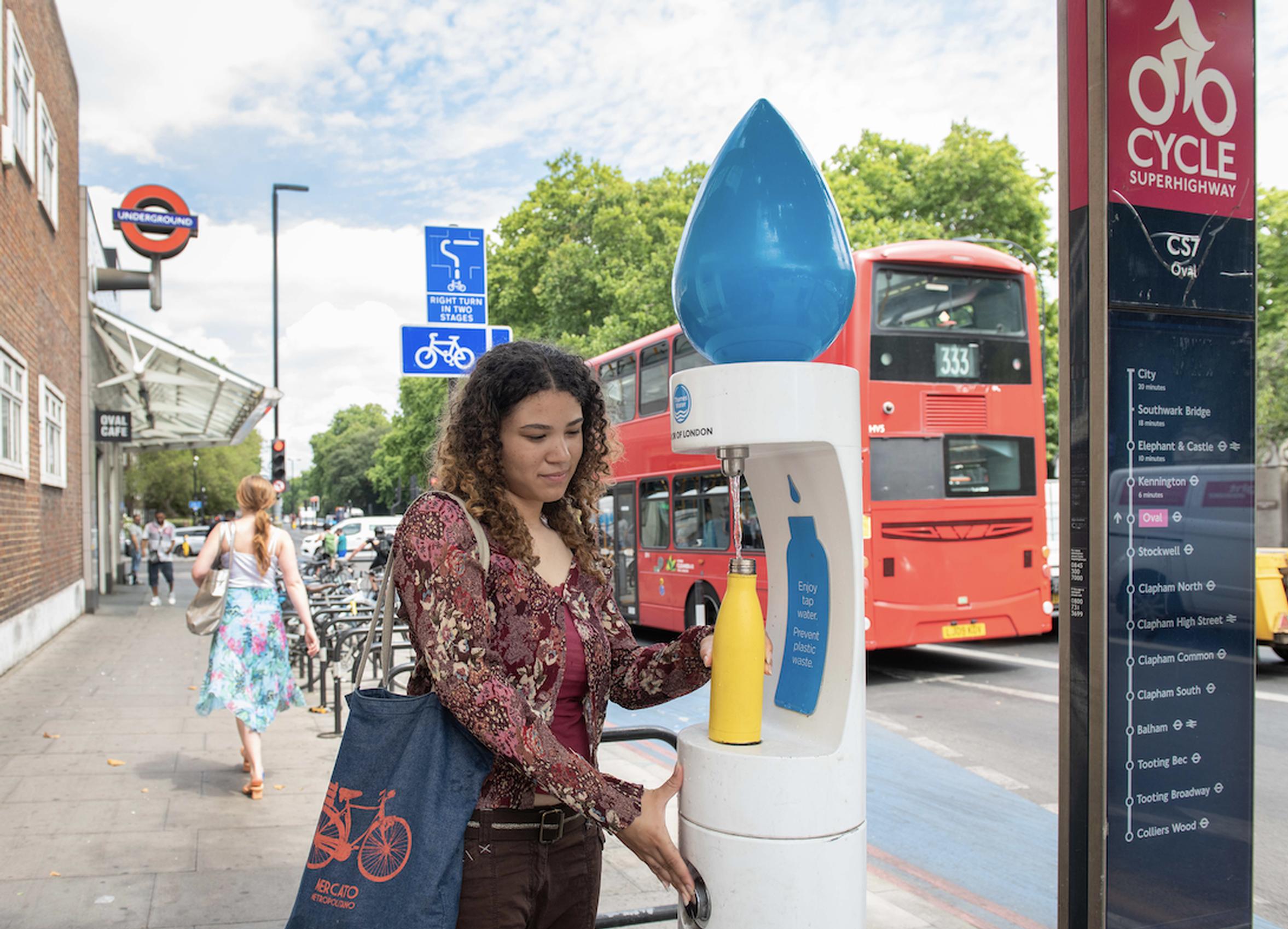 ‘DO NOT TRAVEL.’ That is the blunt message from Network Rail to passengers hoping to travel north out of London on what is set to be the hottest day ever recorded in Britain. The absence of key mainline and many commuter services from rails is one of many indications of how this week’s heatwave is having a profoundly negative effect on travel and transport across the UK.

Rail services have been heavily impacted because the extreme heat can cause rails to buckle rails and overhead wire systems failures. A new record rail temperature of 62oC was recorded in Suffolk. This is over 20oC above recorded air temperatures.

The Met Office issued a red extreme heat warning for Monday and Tuesday covering of England, from London and the South East up to York and Manchester. It is the first time the Met Office has issued a red warning since the system was introduced last year. A red warning means: “widespread impacts on people and infrastructure” are expected, with “substantial changes in working practices and daily routines” required.

A high of 38.1oC was reached in Suffolk on Monday, just short of the UK record of 38.7oC set in 2019. Wales recorded its hottest day on record with 37.1oC and Scotland saw temperatures pass the 30oC mark in Edinburgh ad Aberdeenshire. It is widely anticipated that temperatures will pass the 40oC mark in parts of England today. Overnight temperatures could be in the mid-20s, before cooling on Wednesday.

The current highest temperature in the UK is 38.7oC, in Cambridge in 2019.

One mitigating factor during this week’s hot weather has been that fewer people seem to be on the move, with many people heeding warnings to work from home where possible. Roads and trains were quieter than usual Monday mornings. Stations were reportedly quieter than usual on Monday morning, with Network Rail saying passenger numbers were down by an estimated 20%. In the run-up to the heatwave, Transport for London advised passengers to travel only if essential. Tube passenger numbers until 10am were 18% lower than last Monday, and bus passengers down by 10%.

Government departments and the NHS have been flagging the extreme health warnings for some days. Via social media, the Department for Transport (DfT) has been alerting the public to the likelihood of travel disruption and advising travellers to take precautions such as planning journeys during cooler times of the day and staying hydrated.

Transport secretary Grant Shapps said the UK's rail network could not cope with the extreme heat. “The network cannot cope with the heat right now,” he told BBC Breakfast. "In 40oC heat, tracks can reach 50oC, 60oC, and even 70oC, and there's a severe danger of tracks buckling and a terrible derailing. We are building new specifications, creating overhead lines that can withstand higher temperatures. But with the best will in the world, this is infrastructure which has taken decades to build, with some of our railways stretching back 200 years.”

The transport secretary accepted that it is possible to design and build rail systems that can cope with hot weather, but said upgrades would take years to implement. Speaking on Sky News this morning Shapps said: “This infrastructure is the things which take decades to build and replace. Three years ago, when I became transport secretary, quite literally one of the first conversations I had with the chief executive of Network Rail, Andrew Haines, was about these overhead lines on the railways which tend to sag in heat.

“He talked me through the new upgraded specifications which are going onto the railway lines, where they can withstand much higher levels of temperature and we’re going to see this a lot more regularly. We know that – we’ve seen the hottest days ever recorded have come in the last 10 to 15 years. So we’re going to see this more. It’s a huge infrastructure to replace.

“Decades, actually, to replace it all. Ditto with things like tarmac on the roads and obviously there are millions of miles of roads in total. There’s a long process of replacing it and upgrading it to withstand temperatures, either very hot or sometimes much colder than we’ve been used to, and these are the impacts of global warming.”

Heat is on the railways

As temperatures rose, train cancellations and delays began to grown during the day as speed limits were introduced at midday. Network Rail advised passengers to consider using the railway on Monday and Tuesday only if absolutely necessary, and, if travelling, they should carry water and be prepared for much longer journeys.

The impact on the rail network has been truly national. Trains across Britain were limited to a 90mph maximum. On the West Coast main line, Avanti ran about one train an hour on big intercity routes on Monday – London-Manchester services were taking three-and-a-half hours rather than the usual two.

Temporary speed restrictions have also been introduced across London’s rail and underground networks network. By early afternoon one tube line, the Hammersmith and City line, and parts of the London Overground were suspended because of the heat.

With the expectation that rail services will be even more disrupted tomorrow with higher temperatures predicted and no overnight lull in hot temperatures tonight to enable the railway infrastructure to adequately cool down. This means that speed restrictions will be introduced this morning, rather than at lunchtime.

Andy Lord, chief operating officer of TfL, said: “Due to the exceptionally hot weather that is expected next week, customers should only use London’s transport network for essential journeys. If customers do need to travel, they should check before they travel as we are expecting there to be some impact to Tube and rail services as a result of temporary speed restrictions we will need to introduce to keep everyone safe. It is also vital that customers always carry water at all times with them when travelling.”

Yesterday evening, Network Rail and train operators have this evening upgraded their travel advice for services heading north out of London into the weather warning ‘red zone’ to ‘DO NOT TRAVEL’.

With no services planned to run into or out of London King’s Cross all day tomorrow, there are also now no Thameslink or Great Northern services planned to run north of London all day with East Midlands Railway only running very limited services between Derby, Nottingham, Luton, Bedford and London, which will stop altogether during the hottest part of the day (lunchtime to 19:00).

Network Rail confirmed that there will also only be very limited and disrupted services running into and out of London Euston (Avanti West Coast and West Midlands Railway) and London Marylebone (Chilterns Railway).

Last night Jake Kelly, Network Rail’s operations director, said: “We have not taken the decision lightly to upgrade our travel advice to 'do not travel' if heading north out of London tomorrow. Please replan your journey as there will either be no services or very disrupted services. Any journey tomorrow within the Met Office’s ‘red zone’ is going to be long, disrupted and uncomfortable so, with free refunds or ticket swaps available, our best advice is to stay home and replan your journey. Do not try to travel by rail within the ‘red zone’ tomorrow.”

The disruption has affected more than rail, with both Luton Airport and RAF Brize Norton forced to close on Monday due to heat related damage to their runways.

Drivers seem to have heeded the warnings about not making unnecessary journeys. Road congestion dropped by up to 10% in London, Birmingham, Bristol and Glasgow on Monday morning, compared with the same time last week, according to data from satellite navigation firm TomTom.

However, the RAC has warned that its expects to see an increase in vehicle breakdowns. The recovery service forecasted the number of drivers needing help on Monday and Tuesday will be 15-20% higher than what’s normal for mid-July – the equivalent of over 1,000 extra breakdowns a day.

The council said: “The decision has been taken as there is a clear safety risk. The weather warning states: ‘population-wide adverse health effects experienced, not limited to those most vulnerable to extreme heat, leading to serious illness or danger to life’. The advice is not to travel by train or car unless absolutely essential, as there could be last minute delays, cancellations to services and issues on the roads.”

The Met Office issued its first ever red warning for extreme heat on 15 July. This warned of a “potentially very serious situation” with temperatures set to hit 40oC on 18 and 19 July.

On the same day, a Level 4 alert was issued by the UK government for the first time since the Heatwave Plan for England was introduced in 2004.

The Level 4 alert indicates that a severe heatwave could have impacts beyond health and social care with potential effects on transport systems, food, water, energy supplies and businesses.

The UK Health Security Agency (UKHSA) will continue to monitor any heat-related illness and work closely with the Met Office, the NHS and other government departments to assess the impacts of this hot weather.

Dr Agostinho Sousa, head of extreme events and health protection at UKHSA said: “Temperatures in England next week are likely to reach record levels, and it’s important we all know how to stay well in hot weather. Check up on vulnerable friends, family and neighbours to make sure they stay hydrated, keep cool and know how to keep their homes cool.”

Professor Penny Endersby, chief executive at the Met Office, said: “This is the first time we have issued a Red National Severe Weather Warning for extreme heat and the first time 40°C has been forecast in the UK. In this country we’re used to treating a hot spell as a chance to go and play in in the sun. This is not that sort of weather.

“We have seen when climate change has driven such unprecedented severe weather events around the world that it can be difficult for to make the best decisions because nothing in our life experiences has led us to know what to expect.”