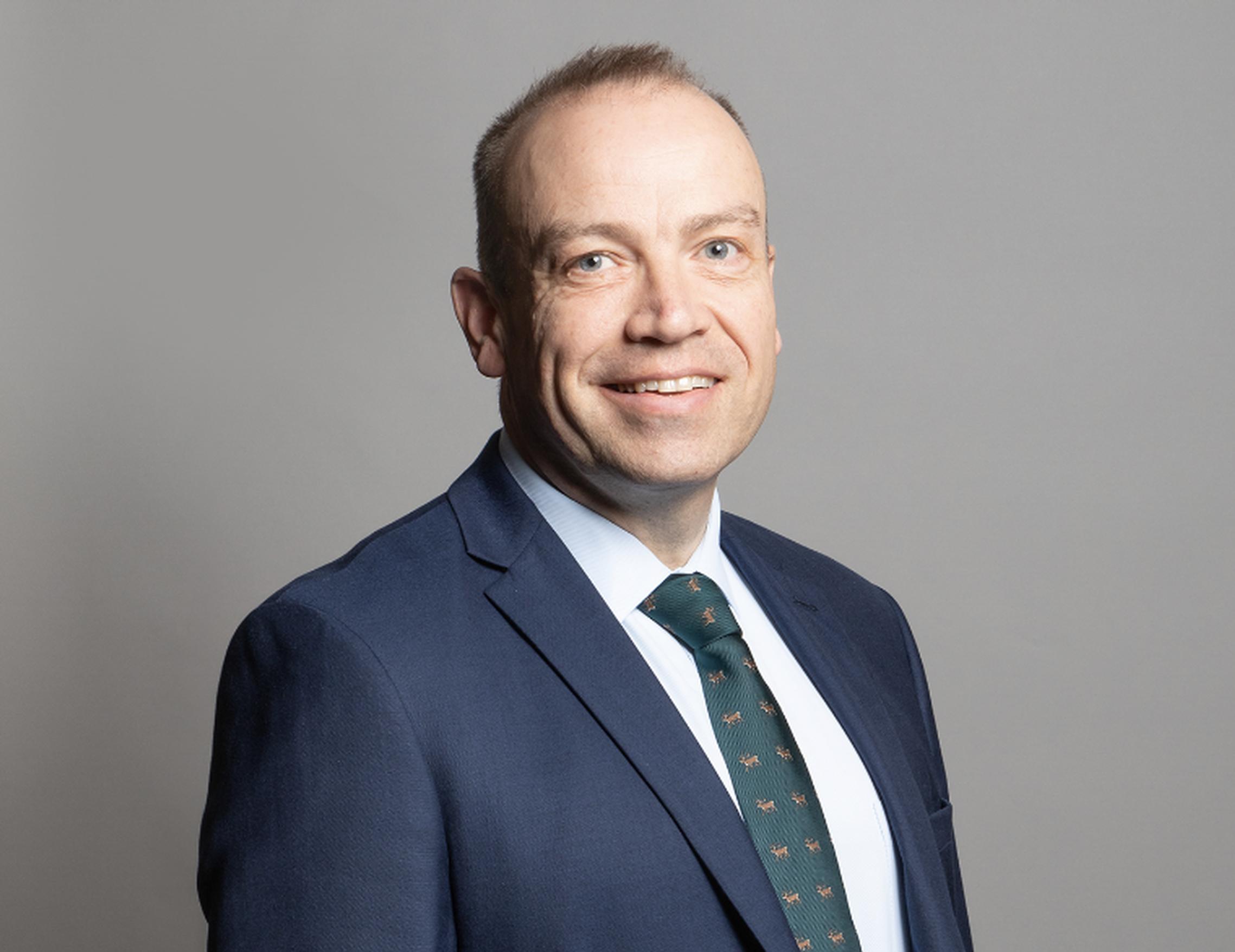 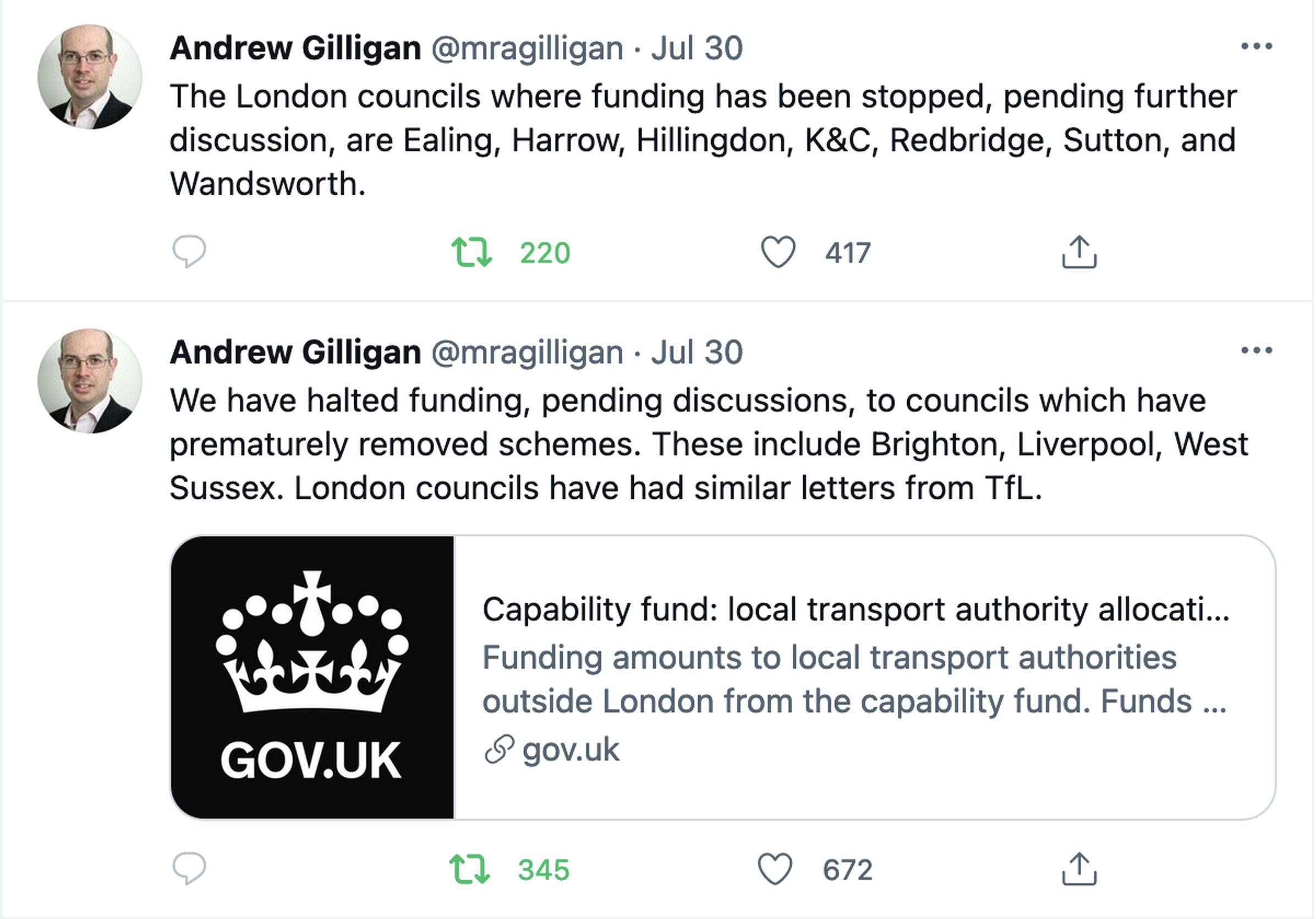 Councils that remove active travel schemes before having given them a chance to work or without evidence they are failing could lose future central government funding, ministers have warned.

Following a number of councils removing cycle lanes and Low Traffic Neighbourhoods (LTNs) in the face of vocal objections, transport minister Chris Heaton-Harris has formally written to the leaders of all English local authorities with transport responsibilities.

Heaton-Harris emphasises that active travel schemes supported by government funding need to be left in place long enough for their impacts to be properly monitored and assessed.

“Premature removal of schemes carries implications for the management of the public money used in these schemes and for the government’s future funding relationship with the authorities responsible,” wrote Heaton-Harris. “The department will continue to assess authorities’ performance in delivering schemes and, following the precedent we have already set, those which have prematurely removed or weakened such schemes should expect to receive a reduced level of funding.”

Heaton-Harris warns council leaders that they have to make sure any decisions are made on the basis of evidence. He wrote: “We have no interest in requiring councils to keep schemes which are proven not to work, but that proof must be presented. Schemes must not be removed prematurely, or without proper evidence and too soon to collect proper evidence about their effects.”

The Prime Minister, Boris Johnson, has also warned councils that they will need to justify the removal of schemes. In his introduction to a review of the Gear Change cycling and walking programme, Johnson wrote: “I support councils, of all parties, which are trying to promote cycling and bus use. And if you are going to oppose these schemes, you must tell us what your alternative is, because trying to squeeze more cars and delivery vans on the same roads and hoping for the best is not going to work. As the benefits of schemes increase over time, what opposition there is falls further. That is why schemes must be in place long enough for their benefits and disbenefits to be properly evidenced.

“Almost exactly six years ago, in east London, we began the first of the transformational low-traffic neighbourhood schemes I funded as mayor. There was intense controversy: hundreds of protestors carried a golden coffin to symbolise the ‘death’ we were supposedly causing to the local shops. But the council stuck it out, thank goodness. Now, the local shops and cafes have never been busier, air quality is up, opposition to the LTN has evaporated, and so has some of the traffic.”

In a series of tweets, the Prime Minister's transport policy advisor, Andrew Gilligan, listed councils whose funding had been stopped. Conservative-run West Sussex County Council has been told it cannot apply for the next phase of active travel funding after it removed a cycle lane in Shoreham-by-Sea. Other local authorities that have had their active travel funding scheme funding stopped, pending further discussion are Brighton & Hove City Council and Liverpool City Council.

Several London boroughs have also had their funding has been stopped by Transport for London (TfL), pending discussions: Ealing, Harrow, Hillingdon, Kensington & Chelsea, Sutton and Wandsworth.

Duncan Dollimore, head of campaigns for Cycling UK, said his organisation had been arguing that councils should give schemes enough time to work. “It’s tragic that the Department for Transport has had to issue revised guidance to reinforce this obvious point, and councils in Liverpool, Brighton and elsewhere, who’ve decided in recent days to remove cycle lanes without proper evaluation, need to urgently review those plans.”

To: Leaders of all combined, transport and highway authorities in England

Over the last year, cycling has risen by 46%. In 2020, we saw the highest level of cycling on the public highway since the 1960s, and the greatest year-on-year increase in post-war history. Many people have started cycling for shorter journeys, saving appreciable amounts of pollution, noise, CO2 and traffic danger. In some cities the delivery bike has become as normal a sight as the delivery van. Even after these remarkable rises, according to one leading retailer, a further 37% of the population now wants to buy a bike.

These things have been made possible, in part, by hundreds of school streets, pop-up cycle lanes, and Low Traffic Neighbourhoods implemented under the government's Emergency Active Travel Fund (EATF) and under statutory Network Management Duty guidance. For all the controversy these schemes can sometimes cause, there is strong and growing evidence that they command public support.

I do know that a few councils have removed, or are proposing to remove, cycle schemes installed under the fund, or to water them down. Of course I understand not every scheme is perfect and a minority will not stand the test of time, but if these schemes are not given that time to make a difference, then taxpayers’ monies have been wasted. Schemes need time to be allowed to bed in; must be tested against more normal traffic conditions; and must be in place long enough for their benefits and disbenefits to be properly evaluated and understood. We have no interest in requiring councils to keep schemes which are proven not to work, but that proof must be presented. Schemes must not be removed prematurely, or without proper evidence and too soon to collect proper evidence about their effects.

As the Secretary of State stated in a letter to all local authorities in November 2020, since the peak of the emergency had passed, we now expected local authorities to consult more thoroughly. We revised our Network Management Duty (NMD) guidance to state that measures should be "taken as swiftly as possible, but not at the expense of consulting local communities" and that "local residents and businesses should... be given an opportunity to comment on proposed changes" to schemes. Please note these requirements also apply as much to the removal or modification of existing schemes as to the installation of new ones. In many cases where schemes have been removed or modified, there appears to have been little or no consultation.

The Secretary of State also stated in his November letter that consultation should include objective tests of public opinion, such as professional polling, to gather a truly representative picture of local views. Obviously the views of the local Member of Parliament should be taken into account.

Premature removal of schemes carries implications for the management of the public money used in these schemes and for the government's future funding relationship with the authorities responsible. The department will continue to assess authorities’ performance in delivering schemes and, following the precedent we have already set, those which have prematurely removed or weakened such schemes should expect to receive a reduced level of funding.

We are also publishing updated Network Management Duty guidance on this subject, describing in more detail the obligations of authorities to allow adequate time to evaluate schemes and to engage with local people and protected groups using professional opinion surveys, including on any proposed removal. Authorities which are proposing to remove or weaken schemes should not proceed with their plans unless they are satisfied that they have had regard to the guidance.

Chris Heaton-Harris is Minister of state for transport