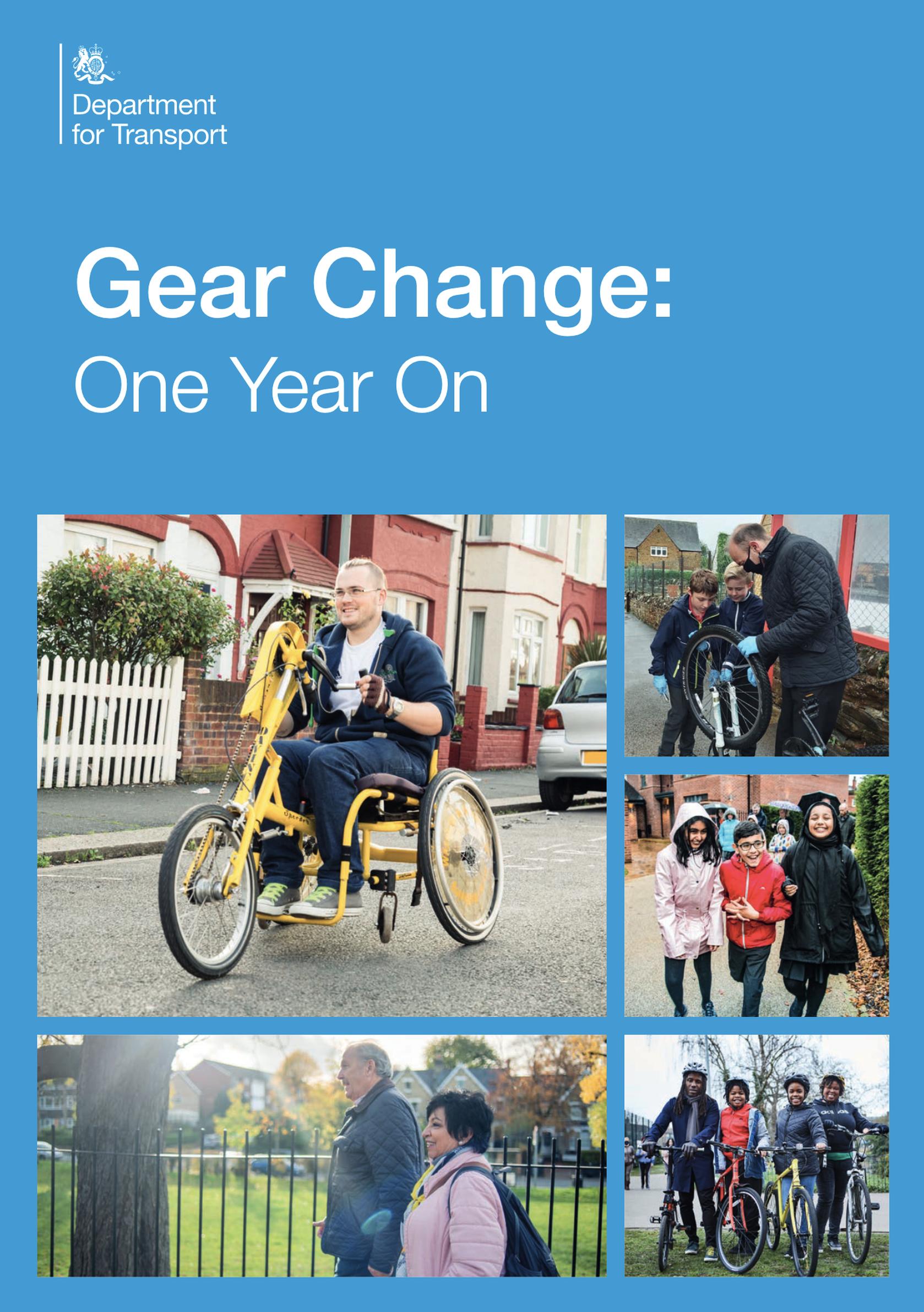 Changes to the Highway Code will include placing pedestrians at the top of a new “road user hierarchy”, the Department for Transport has announced.

The revisions to road user hierarchy were announced by transport secretary Grant Shapps alongside a commitment to increase the cycling and walking budget announced at the Spending Review to £338m.

The infrastructure upgrades, changes to The Highway Code and new requirements to ensure that active travel schemes’ effects are properly assessed are among the raft of measures included as part of what the government is calling a Summer of Cycling and Walking.

Shapps said: “Millions of us have found over the past year how cycling and walking are great ways to stay fit, ease congestion on the roads and do your bit for the environment. As we build back greener from the pandemic, we’re determined to keep that trend going by making active travel easier and safer for everyone.

“This £338m package marks the start of what promises to be a great summer of cycling and walking, enabling more people to make those sustainable travel choices that make our air cleaner and cities greener.”

One year on…
The announcement builds on Prime Minister Boris Johnson’s £2bn Gear Change cycling and walking programme which was announced exactly one year ago.

A year one review of Gear Change looks at what has been achieved, then sets out evidence from a number of case studies and explains the benefits of the investment. In May 2020, the government announced £2bn of new money for cycling and walking over the course of the parliament.

During 2020/21, it provided over £320m to local authorities through a new Active Travel Fund, and to Transport for London (TfL) through the first two tranches of its funding deal, to reallocate road space and create dedicated walking and cycling routes.

In May 2020, the government also published new statutory Network Management Duty guidance requiring local authorities in urban areas to reallocate roadspace for cycling and walking. In July, the government published Gear Change, a cycling and walking plan for how the money will be spent, and Local Transport Note 1/20, which offered detailed design guidance requiring much higher standards for cycling schemes.

In his forward to the review, Boris Johnson writes: “I know many people think that cycling and walking schemes simply increase car traffic on other roads. But there is now increasing evidence that they do not. We sometimes think of traffic as like water: if you block a stream in one place, it will find the next easiest way. Of course some journeys by car are essential, but traffic is not a force of nature. It is a product of people’s choices. If you make it easier and safer to walk and cycle, more people choose to walk and cycle instead of driving, and the traffic falls overall.”

The past year has seen cycling rise more than in the previous 20 years put together, with the number of miles cycled on British roads rocketing by 45.7% to five billion, according to the PM and the DfT.

Independent opinion polling and new research, also just published by the DfT, shows that active travel schemes are supported, on average, by a ratio of two-to-one.

Increased funding
The £338m funding commitment is a 30% increase to the £257m announced for active travel in last year’s spending review. The funding is intended to support the construction of hundreds of miles of new high-quality cycle lanes and aid the delivery of new schemes to encourage walking. This will include the delivery of improvements across the National Cycle Network.

The revenue grant will enable local transport authorities to promote cycling and walking in their areas by:
•    the development of infrastructure plans, including drawing up bids for capital funding that are compliant with local transport note (LTN) 1/20
•    carrying out behaviour change activities, such as training and promotion.

The fund is separate from the larger capital grant fund, which will be allocated depending on the quality of authorities’ LTN 1/20-compliant bids for infrastructure schemes.

Following a number of councils removing cycle lanes and Low Traffic Neighbourhoods in the face of vocal objections, transport minister Chris Heaton-Harris has formally written to the leaders of all English local authorities with transport responsibilities.

The letter said active travel schemes supported by government funding emphasises need to be left in place long enough for their impacts to be properly monitored and assessed. The letter warned councils that if cycling and walking schemes installed using central government money are hastily abandoned, this could affect future grants.

A new road user hierarchy
To enhance safety for cyclists and pedestrians, a new version of The Highway Code will be published in the autumn, with updates including:
•    a ‘hierarchy of responsibility’ (Rule H1) will ensure that road users who can do the greatest harm have the greatest responsibility to reduce the danger they may pose to others
•    strengthened pedestrian priority on pavements and when crossing or waiting to cross the road
•    guidance on safe passing distances and speeds and ensuring that cyclists have priority at junctions when travelling straight ahead

There are also proposed changes at zebra crossings and junctions to give pedestrians priority and additional narrative on the dangers of speeding (Rule H2). At the heart of the proposed changes is the belief that “the purpose of the Highway Code is to promote safety on the road, whilst also supporting a healthy, sustainable and efficient transport system”.

The proposed changes to the code, which are due to receive parliamentary approval in the autumn, will also give pedestrians priority at junctions as well as raising further awareness about the dangers of speeding.

Other measures
As well as improving safety for cyclists, the government is also aiming to make cycling easier and more accessible through a new scheme aiming to increase awareness of electric cycles (e-cycles) and tackle barriers to their use. An e-cycle support programme will be launched later this year and comes after the government has already provided funding to help nine local authorities deliver e-cycle initiatives.

Other key measures included in the Summer of Cycling and Walking include: plans to publish a new road safety strategic framework; commitments to help train hundreds of new Bikeability instructors; and exploring how historic railway structures can be converted into cycle routes.

The Department for Transport has also committed to making an announcement on the enforcement of pavement parking later this year.

The government has also announced that the new Active Travel England (ATE) commissioning body, which will hold the national cycling and walking budget, will begin work later this year.

Positive reactions
Xavier Brice, Sustrans chief executive, said: “The funding will bring major improvements to the National Cycle Network in England by linking communities together and enhancing valued and well-used cycling and walking routes. Most importantly of all, this vital boost will further enable those who want to cycle or walk to do so.

“The pandemic has highlighted the huge benefits of active forms of travel to people’s personal health and wellbeing, to local communities and to the environment.  We’ve seen a marked increase in numbers using the cycle network and this commitment to funding underlines its importance.

“We welcome the government’s continued focus on cycling and walking. The time is right to ensure we’re able to carry on working with our volunteers and other organisations in our role as a proud custodian of the network, to create and offer a safe, accessible and traffic-free travel environment for everyone’s benefit.”

Living Streets, the UK charity for everyday walking supported the changes when the government launched its consultation on the proposals last year. Responding to the new initiatives, Stephen Edwards, Living Streets’ interim chief executive, said: “The Highway Code currently treats children walking to school and lorry drivers as if they are equally responsible for their own or other people’s safety. These changes will redress that balance.

“People walking cause the least road danger but are often left paying the price, with pedestrians accounting for over a quarter of road deaths. Road users who have potential to cause the greatest harm should take the greatest share of responsibility to reduce the danger they pose.  Whether we choose to also drive or cycle, we are all pedestrians. These proposed revisions will benefit us all.”

Commercial concerns
However, the Road Haulage Association (RHA) said it is “extremely concerned” at the changes to the Highway Code as announced by the Department for Transport.

RHA chief executive Richard Burnett said: “As far as we can see, there is little, if any, justification for these changes. The new priority rules for cycling are wrong. We have been campaigning for years to make cyclists aware of the dangers of undertaking turning HGVs but it now appears that they have right of way. This will encourage a known unsafe manoeuvres by cyclists who are then absolved of responsibility for their actions towards motorists.

“Making a driver – motorist or commercial vehicle driver – who has no control over how a cyclist is trained to use the roads responsible for the safety of others is inherently unjust. The rules around pedestrian priority make sense, the change for cyclists increases road danger and collision risk. The hierarchy of risk created by the operation of cars, vans, coaches, buses and lorries is already reflected in the additional ongoing training undertaken by lorry and coach drivers.”