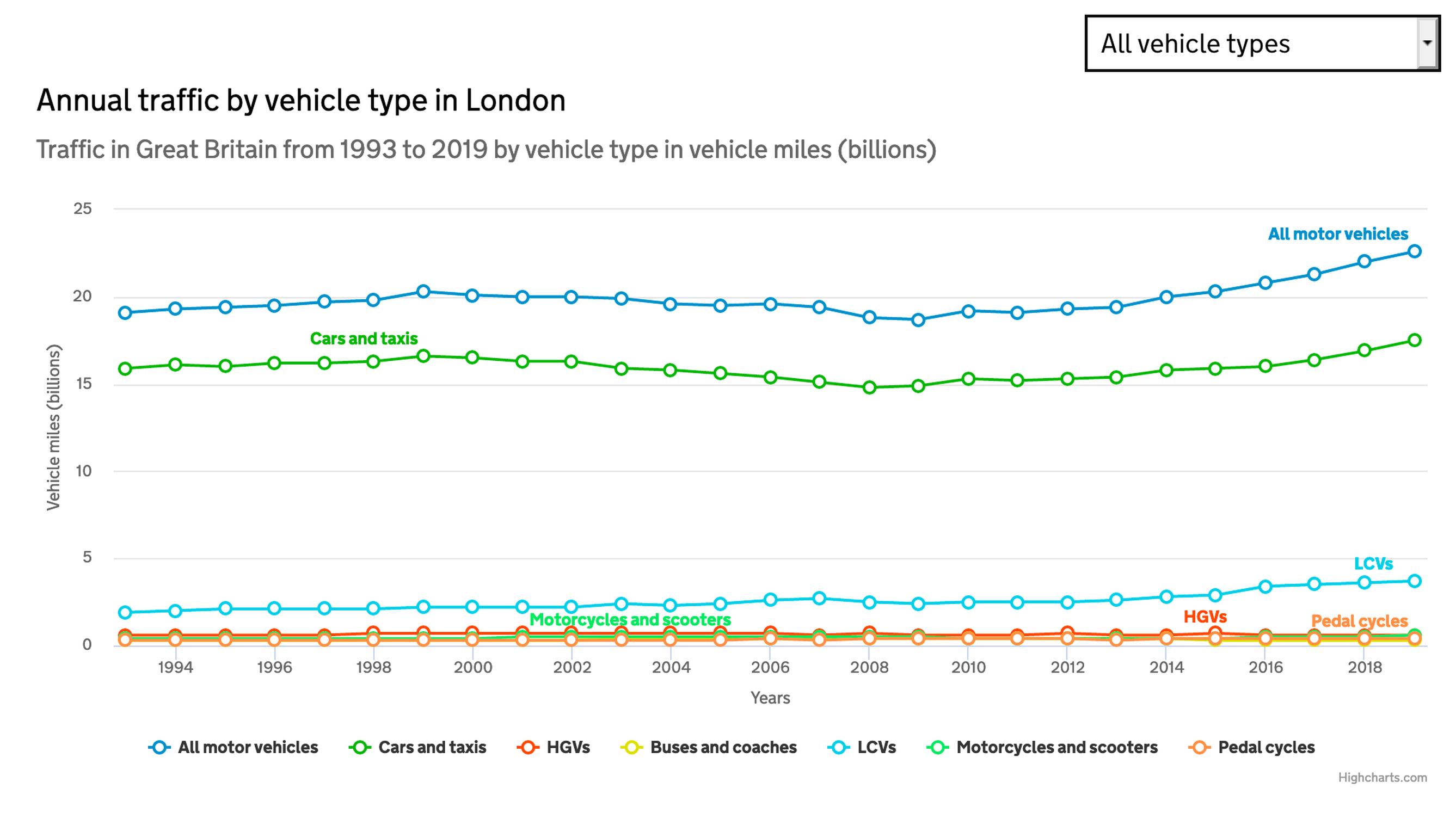 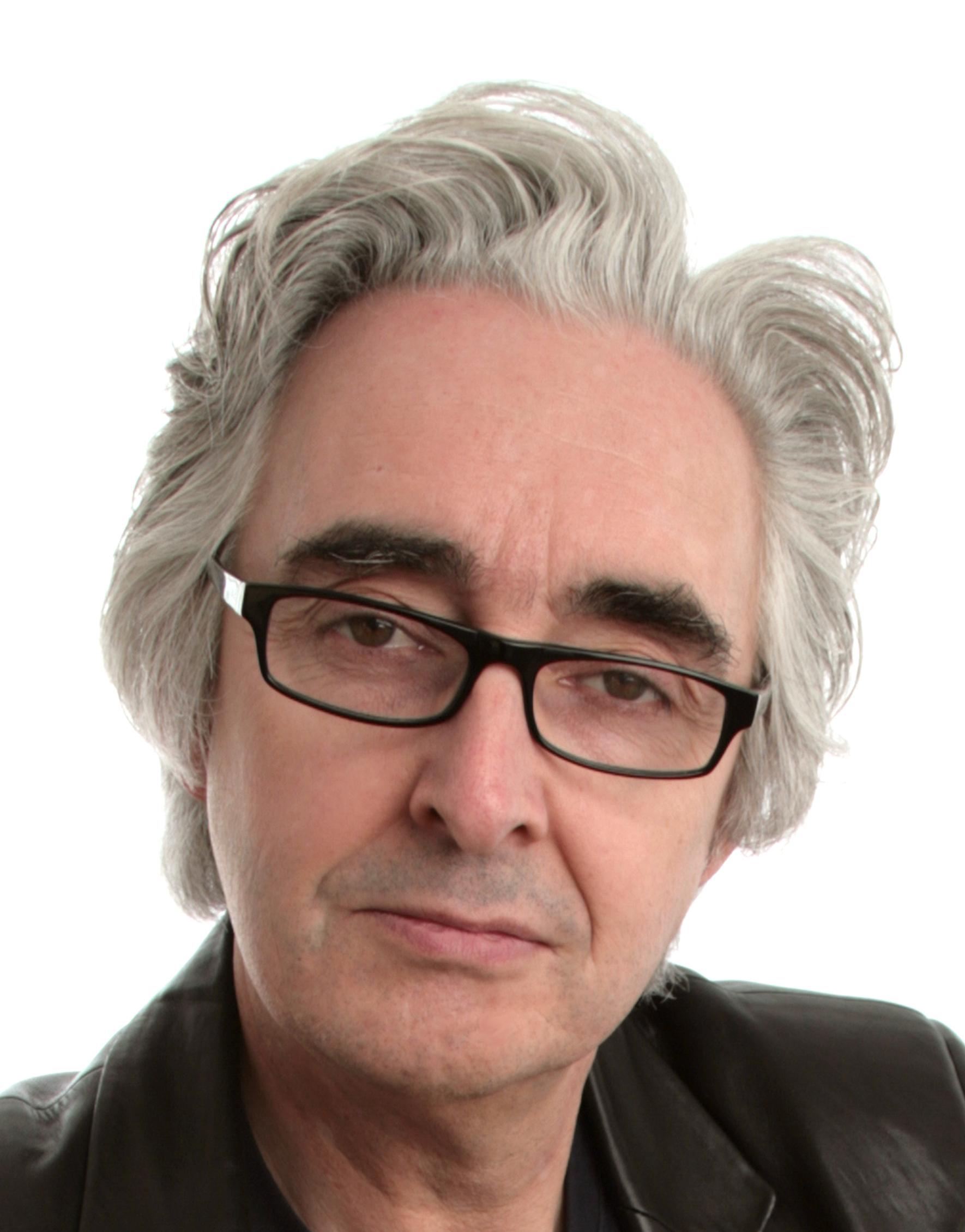 Developing policies to tackle traffic-related problems by making big cuts in car and van use has been an ongoing challenge for decades. Vogue theories emerge from ivory towers and some get passionate support. Boosting bus use by 50 per cent and reducing congestion to pre-2000 levels was a great hope for the Government’s £180bn Better Deal for Everyone ten-year plan of 2000 but didn’t materialise.

As modal shift plans fail, new theories gain traction and different alternatives to cars gain favour. By 2010, bicycles had overtaken buses in plans to shift drivers out of cars. In London, £1bn was allocated to promote cycling and double it from around 2.5 to 5 per cent of mode share. By 2019, that had not happened and trips by car and van are still rising as the accompanying DfT chart graphically shows (https://is.gd/E7B3NH).

Nationally, a DfT cycling factsheet shows the distance travelled by bicycle is one per cent and the percentage of trips by bicycle is two per cent. By 2019, around 80 per cent of UK passenger trips were still by car. In reality, nothing has delivered significant shift. There is clearly a critical gap between policy theory and practice.

However, and albeit inadvertently, the high-speed entry of e-scooters to the UK could broaden understanding of why such gaps between theory and practice exist. Despite concerns about e-scooters’ potential to cause injury, with at least one UK fatality already, and laws to stop their use, a new and controversial urban transport option has crashed its way into a mix of two-wheeled modes. For now, the trials only permit e-scooters as part of rental schemes. Although privately-owned e-scooters should not be used on public highways right now, they inevitably are.

The quest for answers about what to do about e-scooters has been the first focus of debate. Should they be treated like bicycles and benefit from encouraging measures such as access to cycle lanes and limited enforcement against pavement riding, with laws against it not enforced? Or, should they be treated like motorcycles and subject to legislative controls such as vehicle registration with numberplates to limit lawbreaking, tests of rider competence and vehicle roadworthiness, the compulsory wearing of helmets and fitting of rear-view mirrors to reduce risks of injury?

A duly diligent search for answers about why e-scooters are so popular has not begun in earnest yet. However, doing so could help answer the question in ways that are sufficiently realistic and rational to enable more modal shift than before.

I suggest this having done my bit over a couple of decades to enable such shift. With a PhD in the Politics of UK Transport Policy and some knowledge about the pros and cons of two-wheelers as urban transport modes, I was a member of TfL’s Cycle Superhighway Design Group, the London mayor’s Roads Task Force and PACTS (the Parliamentary Advisory Council for Transport Safety). In my view, enabling more modal shift to two wheelers has a vital role in tackling congestion-related problems. However, in my experience, progress in that direction was and still is unduly limited by anomalies in the perceptions of them.

A key advantage and potential draw for car drivers is that all two wheelers can filter through congested traffic. But the London Assembly report, Motorcycling Policy in the Capital (2016), revealed an aim to stop powered two wheelers (PTWs) filtering. In theory this was justified as a way to ‘remove ambiguity’ for PTW riders choosing to filter or not. In practice, road space was cut and junctions changed to make filtering physically impossible or significantly more hazardous.

Up until now, a well-established hierarchy ranks different forms of two wheelers. At its core is a beguilingly simple distinction between ‘good’ and ‘bad’ ones. Bicycles are pedal driven and good. PTWs, are motorised and bad. Herein lie anomalies. The proportion of e-bikes in the UK is rising and rocketing elsewhere. By July 2020, it had reached 31.5 per cent in Germany, 42 per cent in the Netherlands and 51 per cent in Belgium (https://is.gd/ZGp7CM). In reality, e-bikes are PTWs and concerns about fossil-fuelled PTWs are being met with the advent of ultra-low and zero emission motorbikes and scooters.

The fact that e-scooters are motorised is the key to their law-defying popularity. The lack of motors on bicycles fundamentally limits the extent of mode shift to them. Like it or not, motorised two wheelers can facilitate more trips currently done in cars than bicycles. Enabling more shift to PTWs has more benefits than is widely recognised. The Leuven-Brussels study showed that a ten per cent shift from cars to PTWs could cut congestion by 40 per cent when measured by time spent by all vehicles (https://is.gd/y4F5Ts).

The current policy emphasis constrains PTW use far more than bicycles but that doesn’t mean they should be. E-scooters are currently ridden on pavements, in cycle lanes and amidst congested motor vehicle traffic. Deciding where they should go is important. Will enabling use of PTWs with small wheels and high potential to fall foul of potholes deliver more modal shift from cars than enabling more use of PTWs with bigger wheels? Will legalising e-scooters deliver more modal shift from walking than from driving?

Finding the optimal answers to key questions is vital and could benefit from fresh thinking about the pros and cons of two wheelers. Optimising policy responses to the advent of e-scooters and enabling truly significant modal shift from cars is equally vital. Real progress could be delivered if policy-shapers are willing and able to change the way two wheelers are seen. There is of course a catch. New ways of seeing things may be resisted or rejected by those who like the old ones.

Leon Mannings is a former news and feature writer for LTT and author of ‘Traffic and Roads since 2000: Policy, Politics and Perceptions of Progress’, Local Government Studies Special edition: The New Government of London, Vol. 32, No. 3, Routledge Taylor & Francis, 2006.