Climate Change Committee maps out route to Net Zero by 2035 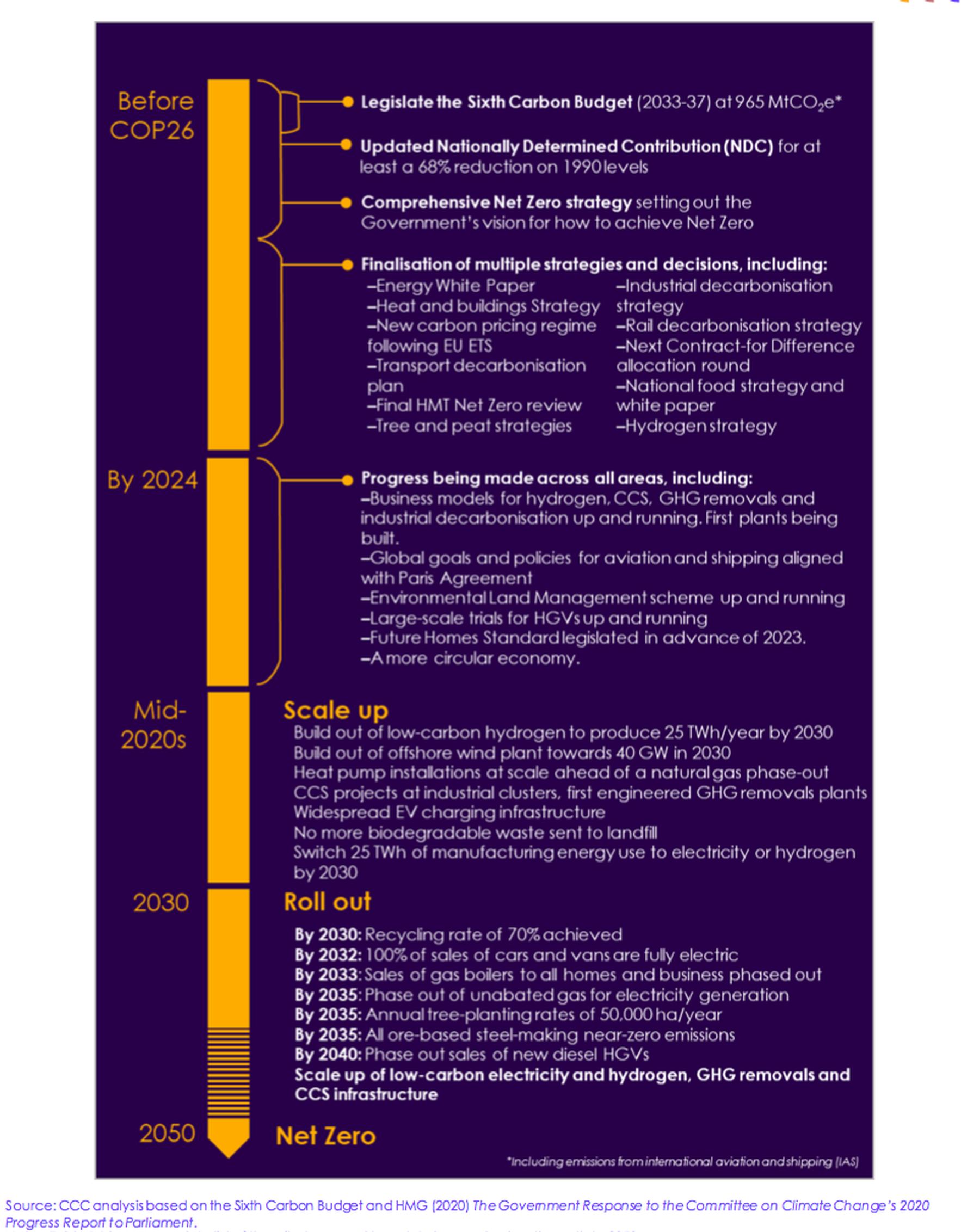 CCC`s timeline for delivery of a decade of change

Every new car and van sold the UK and each replacement boiler installed in homes must be zero-carbon by the early 2030s. These are key milestones set out by the Climate Change Committee (CCC) in its route map for a fully decarbonised nation.

In a 1,000-page report, the CCC sets out the path to the UK can meet its goal of being Net Zero goal over the next three decades.

The CCC predicts that by 2035, all UK electricity production will be zero-carbon. The committee also predicts that low-carbon industries will grow, producing hydrogen, capturing carbon and creating new woodlands, as well as renovating and decarbonising the UK’s 28 million homes.

Initiatives such as these will also provide hundreds of thousands of jobs throughout the UK, the committee predicts.

The Committee on Climate Change is an independent non-departmental public body formed under the Climate Change Act 2008 to advise the United Kingdom and devolved governments and Parliaments on tackling and preparing for climate change. The CCC is chaired by Lord Deben, the former Conservative Environment Secretary John Gummer.

The CCC’s Sixth Carbon Budget (2033-2037) charts the move to zero carbon for the UK. The report shows that polluting emissions must fall by almost 80% by 2035, compared to 1990 levels. The committee points out that just 18 months ago this was the UK’s 2050 goal. To deliver this change, the CCC says a major investment programme across the country must be delivered, in large measure by the private sector. That investment will also be the key to the UK’s economic recovery in the next decade, says the CCC.

The CCC says its Sixth Carbon Budget can be met through four key steps:

The committee says the targets proposed for the UK's “carbon budget” period of 2033-2035 are achievable as the government moves urgently. “The message to the government is clear: the 2020s must be the decisive decade of progress and action on climate change,” it states.

The advisory body says the shift to electric vehicles will prove cheaper than sticking with petrol cars because the former is about three times more efficient. That means the Government may need to claw back tax income by imposing pay-as-you-drive schemes.

However, the committee warns that ministers will need to shield the poorest in society. It will cost, for instance, an average of £10,000 to insulate a home and install low-carbon heating such as heat pumps. The report says the government must find £3-4bn a year to support households make the transition.

The CCC finds that these savings substantially reduce the cost of Net Zero compared with previous assessments: now down to less than 1% of GDP throughout the next 30 years. The saving are driven by the falling cost of offshore wind and a range of new low cost, low-carbon solutions in every sector.

CCC chairman Lord Deben said: “The Sixth Carbon Budget is a clear message to the world that the UK is open for low-carbon business. It’s ambitious, realistic and affordable. This is the right carbon budget for the UK at the right time. We deliver our recommendations to Government with genuine enthusiasm, knowing that Britain’s decisive zero-carbon transition brings real benefits to our people and our businesses while making the fundamental changes necessary to protect our planet.

“As we emerge from the COVID-19 pandemic, the Sixth Carbon Budget is a chance to jump-start the UK’s economic recovery. Anything less would shut us out of new economic opportunities. It would also undermine our role as president of the next UN climate talks.”

Under the UK Climate Change Act, the UK must reach Net Zero Greenhouse Gas emissions by 2050. The Act also requires the Government to set a new Carbon Budget every five years, following the advice of the Climate Change Committee. The Sixth Carbon Budget must be legislated by June 2021.

The CCC is shortly due to advise Welsh ministers on Welsh emissions targets in the 2030s and has written to the Scottish Government and Northern Ireland Executive to provide further advice on setting and meeting climate targets. Together, Scotland, Wales and Northern Ireland cover a fifth of UK emissions.

Last month, Prime Minister Boris Johnson set out a 10-point plan for a green industrial strategy that will create and support up to 250,000 British jobs. Covering clean energy, transport, nature and innovative technologies, the Prime Minister’s blueprint was presented as a means of eliminated the UK’s contribution to climate change by 2050.