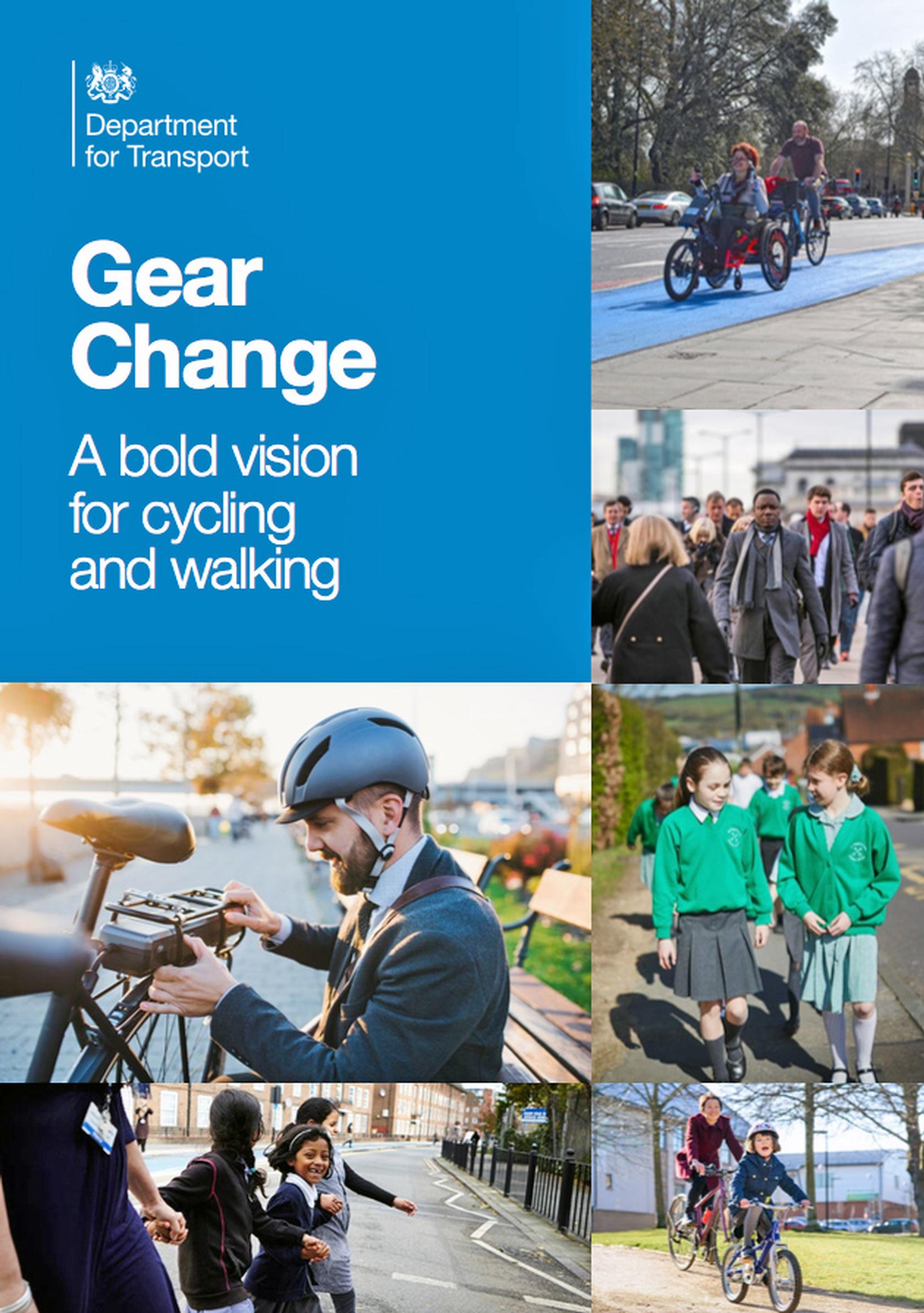 The DfT’s new active travel strategy document Gear Change: A bold vision for cycling and walking may be billed as being about two modes but the emphasis is very much on pedal power. Three of its four chapters ‘themes’ are: better streets for cycling and people; cycling at the heart of decision-making; and ‘enabling people to cycle and protecting them when they do’. Accompanying the strategy, the Department has also published new cycle infrastructure design guidance (see page 8).

The emphasis is not unexpected, given the obvious influence of the Prime Minister and his transport adviser Andrew Gilligan on the strategy’s preparation. Gilligan was London’s cycling commissioner when Johnson was the capital’s mayor.

The strategy is backed up by more money and an expert body – Active Travel England – that will disburse grants, provide expert advice to councils and others, and inspect local authority performance.

“We want to see a future where half of all journeys in towns and cities are cycled or walked,” the DfT states.  “Fifty-eight per cent of car journeys in 2018 were under five miles. And in urban areas, more than 40 per cent of journeys were under two miles in 2017/18. For many people, these journeys are perfectly suited to cycling and walking.”

It recognises that cycling is starting from a low base. Average miles travelled per person by bike have risen from 39 in 2002 to 58 in 2018. But the number of trips has fallen from 18 to 17.

Better active travel infrastructure will be key. “New cycle route provision on busy roads which consists of painted markings or cycle symbols will no longer be funded,” says the DfT. “We want to see as many as possible of the existing painted lanes upgraded with physical separation.

“Clear and regular direction signing is key to getting people walking and cycling, and to helping people understand that, particularly in urban areas, it really isn’t that far.”

Closing roads to through traffic using bollards or camera enforcement – the latter being deployed by the London Borough of Hounslow (LTT 29 May) –  could deliver “a quicker way of providing safe, low-traffic cycling”. “This may be useful where the road is too narrow for a separated cycle lane. The closure would only affect through traffic. Residents, visitors, or delivery drivers needing to reach anywhere along the road would still be able to do so – though they might have to approach from a different direction.”

The DfT wants councils to reallocate roadspace away from general traffic to active travel modes.

“We will conduct a series of national urban road audits to help inform future allocation of road space. Particularly in cities, there can be huge disparities between the amount of road space allocated to a mode (such as walking, cycling or motoring) and the number of people who travel by that mode on that road.

“On a busy shopping street, for instance, perhaps 75 per cent of users may be pedestrians, but they may be confined to narrow pavements taking perhaps 20 per cent of the space.”

The DfT will work with the Ministry of Housing, Communities & Local Government (MHCLG) and the Local Government Association (LGA) to place cycling and walking provision at the heart of local plan-making and the design of new developments.

Train operators will have to provide more space for cycles on trains. “Even as cycling has grown in popularity, the railways have reduced space for bikes on trains. We will reverse that, increasing space on existing trains wherever practically possible, including on popular leisure routes, and will make it easier to reserve bike spaces online and without reservations on emptier trains.

“We will require that all future rolling stock includes more bike spaces relevant to the markets served.”

More bus routes should carry bikes too. “In many rural areas, where demand is lower, we will work with bus operators to allow a limited number of bikes on board, in addition to onboard wheelchair space, on appropriate routes. A handful of urban routes also allow bikes, using external racks. We will investigate extending this provision further.”

DfT to fund the NCN

THE DFT has pledged to support Sustrans’ ambition to enhance the National Cycle Network.

Sustrans has recently relaunched the network after a review found many sections failed the charity’s test of being suitable for a 12-year old travelling alone.

The network now comprises  59 per cent on-road routes and 41 per cent traffic-free routes. Sustrans wants the whole network either off-road or traffic-calmed by 2040.

Says the DfT: “We will improve the Network, especially where it is most useful for everyday journeys, significantly increasing funding, removing obstacles, increasing the proportion that is traffic-free or protected from traffic, and providing smooth, all-weather surfacing on the traffic-free parts that is still consistent with its mainly rural nature.”

It adds: “We will extend the Network where it can be done in accordance with our design standards...”

Up to 12 local authorities in England will be selected  to deliver ‘mini-Holland’ cycle investment programmes.

The ‘mini-Holland’ initiative was applied in London when Boris Johnson was the capital’s mayor. Three boroughs – Waltham Forest, Enfield and Kingston – have deliver a major programme of cycle schemes.

The DfT has pledge to act to reduce the more than 300,000 bicycles that are stolen each year.

“We will consolidate existing ownership registers allowing police to trace the owners of stolen bikes. We will explore mandating retailers to number all bikes they sell on the new database, and to offer customers the opportunity to register at the point of sale.”

GPs in parts of the country will be encourage to prescribe cycling  to improve people’s wellbeing.

“A stock of cycles would be available to lend, with training, access to cycling groups and peer support; in some cases, if they used them enough, patients would be allowed to keep them.

“Patients will not cycle unless they feel safe, so these places will also be major locations for our infrastructure interventions such as segregated lanes, low-traffic neighbourhoods and secure cycle parking.”

Aspects of Transport for London’s safer lorry scheme could be replaced across the country.

“We will review the latest vision standards introduced in London in 2015 and consider whether any elements can be extended to the whole of Great Britain,” says the DfT.

Regulations will be amended in 2021 to require that sideguards fitted to HGVs when new are retained and adequately maintained.

“We will consider the potential of introducing an independent star rating scheme through the Euro NCAP consumer information programme to encourage HGV designs that are safer for vulnerable road users.”

A national e-bike support programme is to be established, which could include loans, subsidies, or other financial incentives.

Local authority bids to the second round of the DfT’s Emergency Active Travel Fund must feature plans to remove roadspace from general traffic.

Councils in England (outside London) submitted their bids this week for a share of the £180m available in the second round of the fund. Round one was worth £45m and is funding temporary measures to benefit active travel during the Covid-19 restrictions.

Rupert Furness, the DfT’s head of active and accessible travel, explained the Government’s objectives for the second tranche of funding in a letter to local authorities last month.

“As with tranche 1, to receive any funding, authorities will need to satisfy the Department that they have swift and meaningful plans to reallocate road space to cyclists and pedestrians (both groups rather than one or the other), including on strategic corridors.

“Schemes that do not meaningfully alter the status quo on the road will not be funded.

“This will allow cycling in particular to replace journeys previously made by public transport, and will have an essential role to play in the short-term in helping avoid overcrowding on public transport systems.” In the longer term, the measures will help deliver “significant health, environmental and congestion benefits”.

Funding can pay for both temporary and permanent measures, including: segregated cycleways; new and widened footways; and point closures to streets for through traffic apart from buses, access and the disabled.

“All cycling schemes, permanent or temporary, will need to include segregation or point closures to through traffic: advisory cycle lanes, and those marked only with white paint, will not be funded.”

Councils should demonstrate that “they have considered the impacts of their proposals on bus and other public transport services”. Measures that deliver benefits for cyclists and bus users “will be particularly welcomed”.

Bids can be made for complementary measures, such as cycle parking; reductions in car parking where this supports cycling and walking; ‘school streets’ traffic restrictions; selective road closures using planters; and monitoring equipment such as cycle counters. Councils can also bid to use small amounts of the funding to support the implementation of e-scooter trials.

Projects must be delivered in this financial year.

The majority of the funding will be paid as capital grant; councils can receive up to 20 per cent of their allocation as revenue (exceptionally, higher allocations of revenue may be made).

As with phase 1, the DfT has invited councils to bid for more than their indicative allocation, as it is prepared to increase funding for strong bids.

The DfT suggests councils may want to make use of a ‘rapid cycleway prioritisation tool’ to identify where to install cycling measures. The tool was developed by the Institute for Transport Studies at the University of Leeds, for active travel charity Sustrans and the DfT.

The tool identifies priority locations for new cycleways, ranking roads by their ‘cycling potential’, estimated using the Propensity to Cycle Tool (PCT). This represents the estimated number of cycling trips along a road travelling to or from work or school assuming the Government’s aim to double cycling by 2025 is met.

The ‘top ranked new cycleways’ represent the roads with the highest cycling potential which also have spare space; that is, are either wide or have two or more road lanes in one direction.