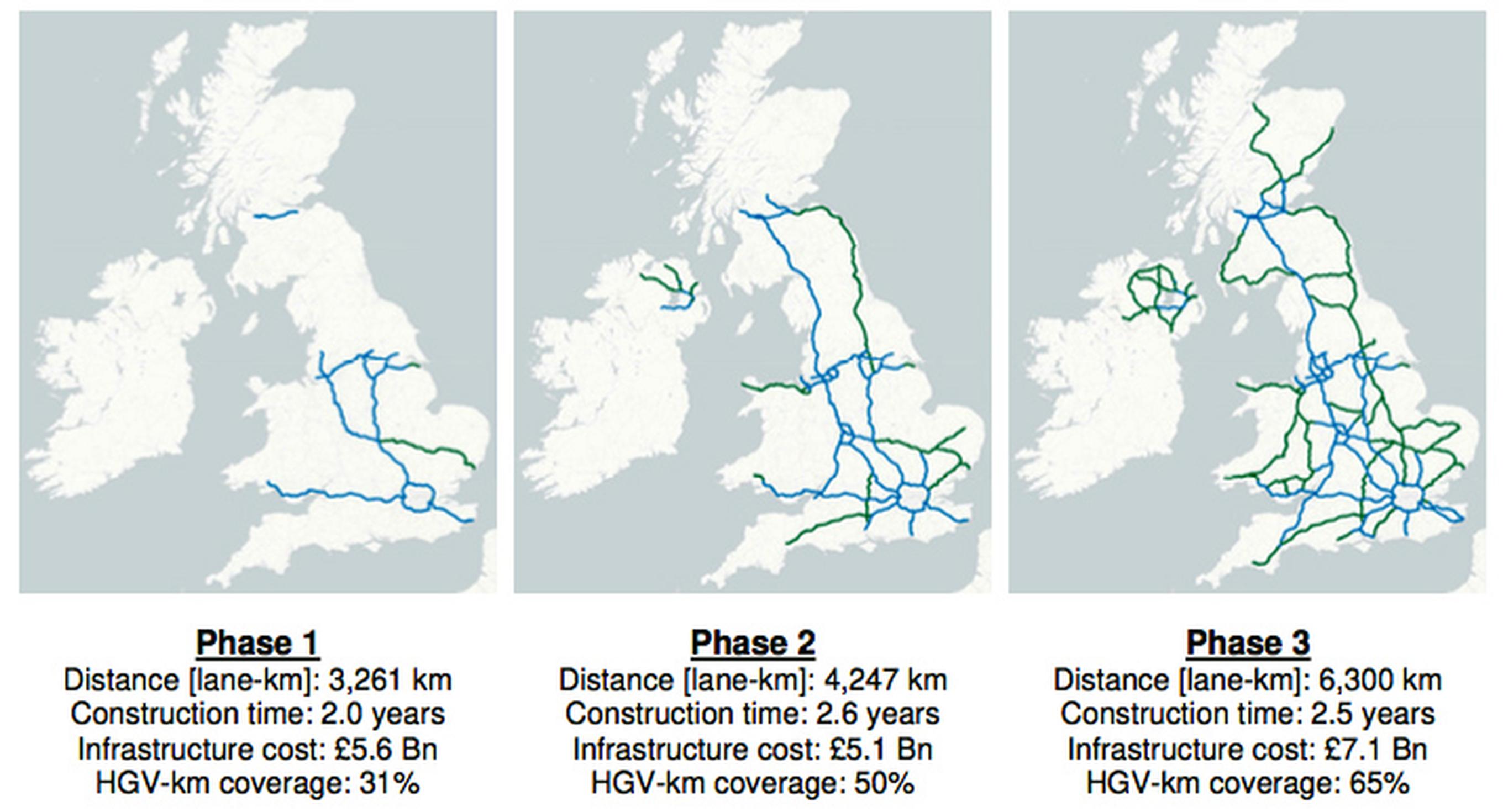 Electrifying road freight by installing overhead electrification wires on the UK’s major roads is the best way to eliminate carbon dioxide emissions from the long-haul road freight sector, according to the authors of a new report.

The electric road system (ERS) is recommended by the Centre for Sustainable Road Freight, a network of the University of Cambridge’s engineering department, the Logistics Research Centre at Heriot Watt University in Edinburgh, and the freight and logistics research group at the University of Westminster.

The ERS is like an overhead electrified railway. Catenary would be installed on roads, with lorries collecting the current via a pantograph mounted on the cab roof. Electricity would pass through an invertor in the vehicle to an electric motor.

Lorries could be fitted with a ‘range extender’ (a small combustion engine and generator) to charge a small onboard battery for powering the vehicle when it runs off electrified sections of the road network. Any existing or future propulsion technology would be compatible with the overhead catenary approach – internal combustion engine, barries or hydrogen fuel cells, says the report.

“Indeed, during the transition period it is anticipated that hybrid vehicles will combine catenary power with diesel, bio-gas or hydrogen fuel cells, to ensure the necessary operational flexibility.”

Report authors Daniel Ainalis, C Thorne and David Cebon estimate it would cost £19.3bn to convert 65 per cent of all HGV-kms to electric operation. The remaining 35 per cent of HGV-kms are mainly urban deliveries, which could be shifted to battery electric vehicles, the report suggests.

An ERS is the most practical way to deliver zero carbon long-haul road freight,  say the authors. “The ERS is the lowest carbon and lowest energy route for road vehicles. Such systems have been demonstrated in four different installations in Europe in recent years and are ready to be scaled-out.”

Other methods of decarbonisation have major drawbacks.

“Use of battery electric vehicles for long-haul is not practical due to the very large batteries required (typically five-ten times the size of the largest batteries used in electric cars and 10-20 times the average car battery). The increased vehicle weight dramatically reduces payload capacity. This and the high battery costs make the operation unviable.”

Biofuels – liquid and gas – could significantly cut CO2 emissions but there is insufficient supply for their widespread adoption, says the report.

Hydrogen-powered vehicles would require excessive amounts of renewable electricity for ‘Green Hydrogen’ production made by the electrolysis of water. ‘Blue hydrogen’ is made from natural gas using steam reformation but the resulting CO2 would then have to be stored underground if emissions are to be minimised. It would also require imports of natural gas.

“Both of these routes [for hydrogen production] would be costly, increasing transport costs and reducing the UK’s competitiveness.”

The report praises Siemens’ ‘eHighway’ system, describing it as the “most feasible ERS infrastructure solution”. It has been trialled in the USA, Germany and Sweden. The technology is suitable for rigid and articulated HGVs and could be used by buses and inter-regional coaches.

The authors recommend a UK pilot project on a section of the M180 between the A156 and the M18 in South Yorkshire. This carries large volumes of lorry traffic to and from the port of Immingham on Humberside and several national distribution logistics facilities exist at Doncaster.

Only the nearside lane of the road would be electrified. A pilot could cost £80m for 40 lane kms. “It can be built in less than a year, with the overall project spanning approximately four years.”

Assuming the trials are successful, the authors suggest rolling out the system nationwide in three phases, culminating in the electrification of more than 15,000 lane-km (7,500 km of road) (see maps).

“Most of the construction can be done from the hard shoulder, without disrupting the traffic. Once the first phase has been completed, hybrid HGVs will be able to immediately use the network and nearly 50 per cent of all HGV-km in the UK will be electrified.

“By the end of the third phase of construction, the UKEMS [UK electric motorway system] infrastructure would be sufficiently far-reaching that range extenders could become an aftermarket option for the rare cases where they may be needed (e.g. distribution to remote areas).”

The authors say the investment could be made with private finance, recouped through the sale of electricity. A profit margin of 7.07p per kWh could pay for the investment over 15 years, they estimate.

Electric lorries would have higher capital costs than a diesel equivalent – the authors suggest a purchase price of £105,692 versus a diesel of £92,200. But operating costs would be lower.

“HGV operators are cost-adverse to adopting new or alternative powertrain technologies because of their low profit margins. Consequently any alternative vehicle must provide fleet operators with a short payback period. This analysis assumes an attractive payback period of 1.5 years (compared to a baseline diesel HGV), which would drive rapid and widespread adoption of eHGVs.”

The 1.5 year payback period includes an assumed electricity tax or road user charge  that the Government would collect to make up for the loss of diesel fuel duty.

“Even with these taxes, the system is financially attractive to both fleet operators and long-term private investors in infrastructure projects, with acceptable payback periods,” the authors remark.

The German and Swedish governments have both implemented pilot electric road system (ERS) schemes to prove its viability on public roads. In 2017 the German and Swedish governments agreed to collaborate on the technology and they were joined by France last summer to create a three-way partnership. Italy is also currently investigating an ERS project.

The Swedish Government implemented the world’s first trial of overhead line ERS technology on public roads. They completed their demonstrator on the E16 outside Sandviken in 2016. The 2km section took 11 months to complete from investment decision in June 2015 to the first tests in May 2016. The pilot cost approximately £10m.

The project has been a success overall, says the Centre for Sustainable Road Freight, and has attracted thousands of visitors since its completion.

The German Government has spent over £62m on its catenary programme across three main demonstration sites (the A5 near Frankfurt, the BAB1 near Lubeck and the B462 near Baden-Württemberg). The electrified sections range between 6km and 10km, with an average per lane-km construction cost of about £1.29m.

“The German project has demonstrated that the majority of the system could be constructed from the hard shoulder and outside of the road boundaries, without any closures of the electrified lane,” says the report. “Only the overhead cable installation required a lane closure, and this work was completed during low impact periods (i.e. night-time).”