Brighton sets out next steps of roadspace reallocation plan 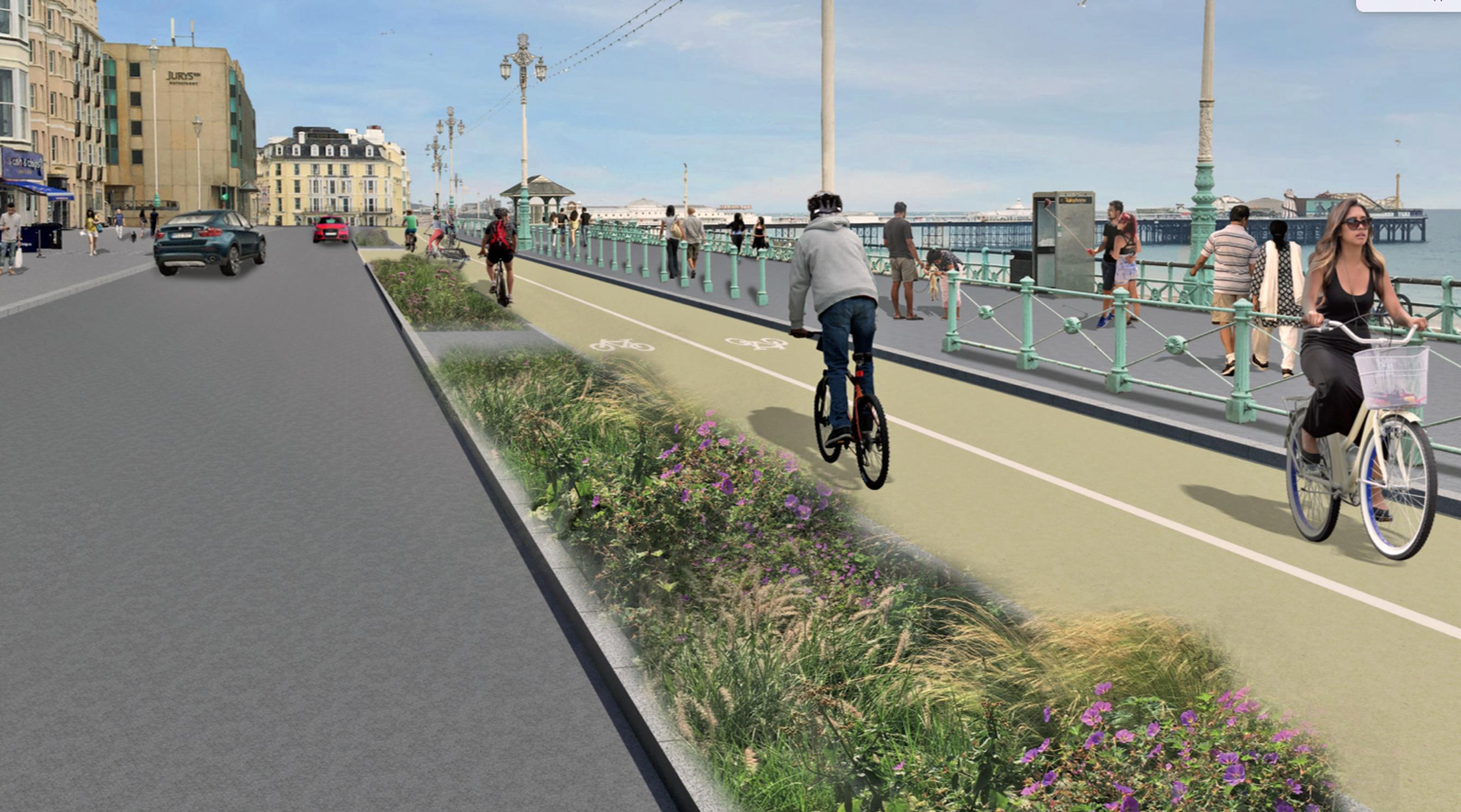 How the permanent cycle route on the A259 could look

Brighton and Hove City Council has outlined a package of roadspace reallocation projects in key parts of the city centre and on the seafront.

In April, the council introduced an experimental closure of Madeira Drive to motor vehicles (except for access), to allow space for people to exercise and make essential journeys while physical distancing. Madeira Drive runs along Brighton’s seafront east of the pier.

The future of the closure is the subject of hot debate. Brighton’s full council meeting later this month will receive petitions arguing for the road to be reopened to vehicles and for it to be permanently closed.

Closing the road permanently will lead to a full-year loss of parking income for the council of £1.3m.

“A full closure is difficult to maintain in the long-term with the need to facilitate the development at Black Rock and access for Blue Badge holders,” the council adds.

A plan is being prepared to reopen the road but with more space for walking and cycling than existed before lockdown. “It is possible to introduce a scheme that would provide improved walking and cycling along the road, re-open 70-80 per cent of parking, and allow it to be reopened,” says the council.

This would introduce a one-way access from the Aquarium roundabout to the bottom of Dukes Mound and create more space for walking and cycling by removing the parking on the southern side of the road. Echelon parking would remain on the northern side.

The council is implementing changes to the operation of standalone pedestrian crossings. Traditionally, the green man has been activated either when there is no traffic approaching or a maximum period of wait time is reached. In future they will respond immediately a pedestrian button is pressed, unless it has just operated.

Temporary cycle lanes implemented on the Old Shoreham Road in May have attracted a mixed response. Cycle ‘wands’ are be installed at conflict points and to stop vehicles using the lanes to undertake other vehicles, particularly on the approach to junctions.

The council has drawn up new plans to improve cycle facilities along the seafront A259 road from the Aquarium Roundabout westward to Hove. The existing footway cycle lane along the road between the Aquarium roundabout and Hove Lawns is narrow and pedestrians and cyclist come into conflict at a number of points.

A new cycle lane will be created by reallocating the westbound nearside lane from vehicles to cyclists. This will allow the existing footway cycle lane to be used by cyclists travelling eastbound only.

The scheme will extend to Fourth Avenue in Hove. Parking along the route will be reduced by 60 per cent.

In a second phase, the council wants to extend cycle facilities scheme up to the West Sussex County Council boundary, where they could linking up with a county council scheme.

Implementing the initial scheme on a temporary basis will provide an opportunity to monitor the impact on traffic movements across the city. “As the Interim Local Cycling and Walking Implementation Plan identifies, this cycle route is key to unlocking active travel across the city,” says the council. “The feasibility of a high-quality permanent scheme has also been commissioned.”

The permanent scheme would be an on-carriageway two-way cycle lane from Aquarium Roundabout to the council’s western boundary. Consultant the Project Centre has worked on the design (see image).

“The permanent scheme would require significant funding due to the need for major changes to the existing road layout,” the council says. “The guidance and timeframes for the DfT’s Tranche 2 Active Travel Emergency Fund have not yet been announced but with further development it is possible that the permanent scheme could be included in a future bid submission.”

The council is also to introduce traffic restrictions in The Lanes, a set of narrow streets in The Old Town district. A previous scheme to remove cars from the area was stopped after it went to a public inquiry following objections to loading bay removals.

Two options have been identified that remove cars from the Old Town but allow cycling  and improve walking by widening footways. Loading, Blue Badge Holders and private access will continue to be allowed at all times but other traffic will be covered by a 24-hour restriction implemented via an experimental traffic order.