Coronavirus: TfL looks to make it easier to walk and cycle in capital 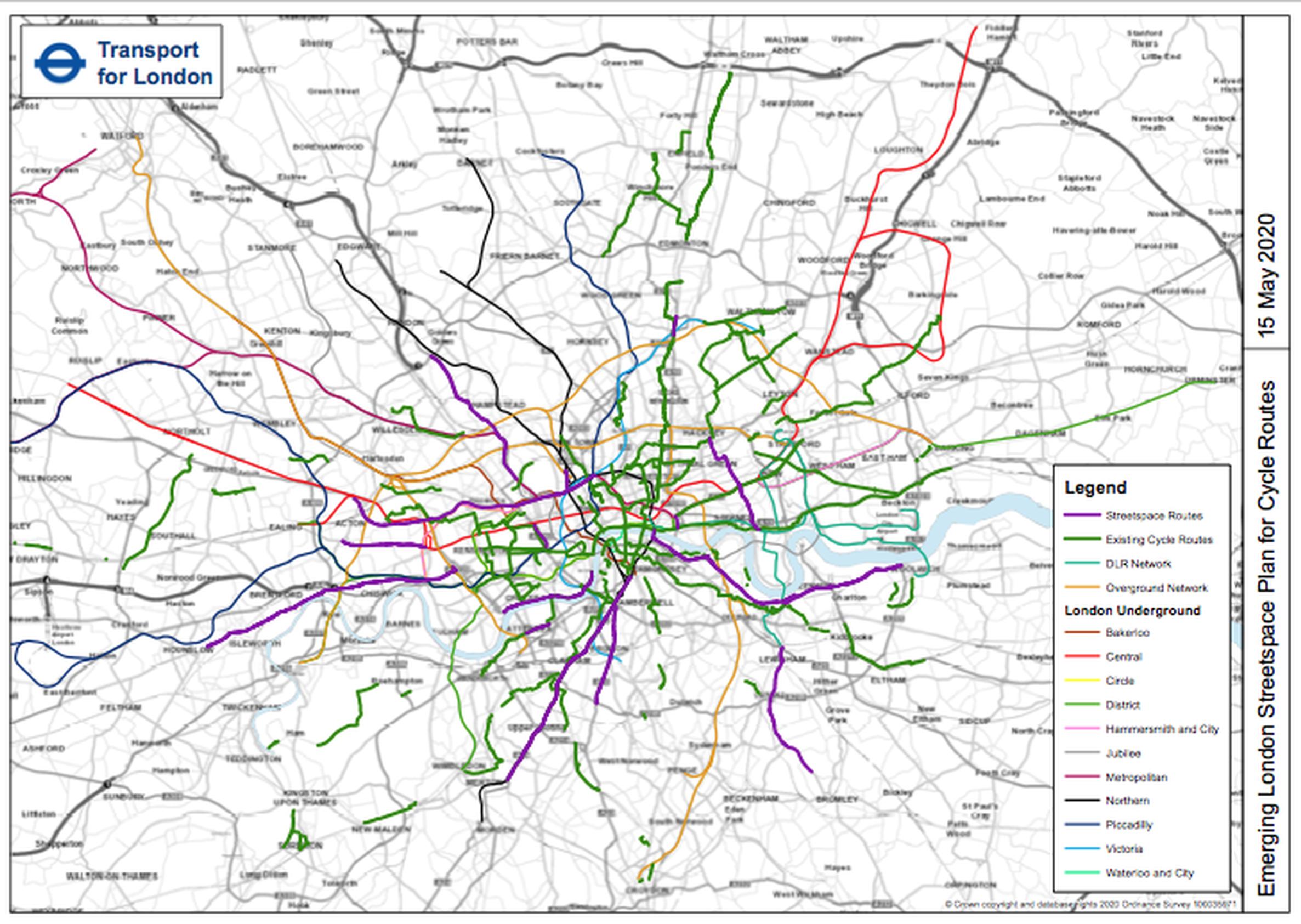 Large areas of central London will be closed to cars and vans to allow people to walk and cycle safely under an initiative called Streetspace.

The Streetspace for London project is designed to encourage walking and cycling as people return to work as lockdown is lifted because physical distancing is impossible on crowded transport. There are also concerns that a surge in car use would cause gridlock and an increase in air pollution.

Mayor of London Sadiq Khan has announced that main streets between between London Bridge and Shoreditch, Euston and Waterloo, and Old Street and Holborn will be limited to buses, pedestrians and cyclists

Transport for London (TfL) are now working with boroughs to implement similar restrictions on the minor roads they manage within the area. Cars and lorries may also be banned from Waterloo Bridge and London Bridge.

In parallel, road user charges suspended on 23 March will be reinstated under the terms of a £1.6bn bailout of TfL agreed between the Mayor and the government.

Streetspace takes shape
TfL is working with London's boroughs to identify places where temporary changes are needed to support social distancing or that would benefit from cycling and walking improvements.

To help people walk and cycle wherever possible, the project is concentrating on three key areas:

TfL said that some of the temporary changes being made could become permanent.

The plans include giving central London some of the largest car-free zones in a capital city. Some streets will be switched to walking and cycling only while others may be limited to walking, cycling and buses. This is now planned for streets between:

Emergency services and people with mobility issues will still have access, but deliveries on some streets may be restricted to outside of Congestion Charge hours.

Waterloo Bridge and London Bridge may be restricted to people walking, cycling and buses only, with pavements widened so people can safely travel between busy railway stations and their workplaces.

The City of London plans to make its busiest roads car-free as lockdown is eased. TfL is working with the City of London Corporation on options to improve routes between Old Street and Bank, and between Cannon Street and Holborn to Bank for walking and cycling.

Work on Cycleway 9 between Kensington Olympia and Brentford, and Cycleway 4 between Tower Hill and Greenwich will speed up with temporary measures. Another 30km of permanent cycle lanes will be added to the existing 160km-long Cycleway network during summer 2020

Changing streets
On-street parking and lanes for cars and general traffic will be repurposed to give people on foot and on cycles more space to social distance while they travel past and queue for local shops.
Walking space has also been added on these streets, with more to come:

Some roads have been temporarily closed to motor vehicles:

Protecting access
TfL said it is working to make sure that people with any mobility issues are still able to use the pavements as normal. It is also looking at the needs of businesses that make and receive deliveries as well as taxis that drop off and pick up passengers.

Some loading bays may need to be shortened or moved but we'll try to make temporary arrangements to minimise any disruption to business activity. We'll review all changes regularly.

No taxi ranks have been moved or removed so far on roads we are responsible for.

Advice for borough officers
TfL is preparing guidance to help London's boroughs, local authorities and our other partners plan, design and create the most effective and sustainable walking and cycling infrastructure possible.