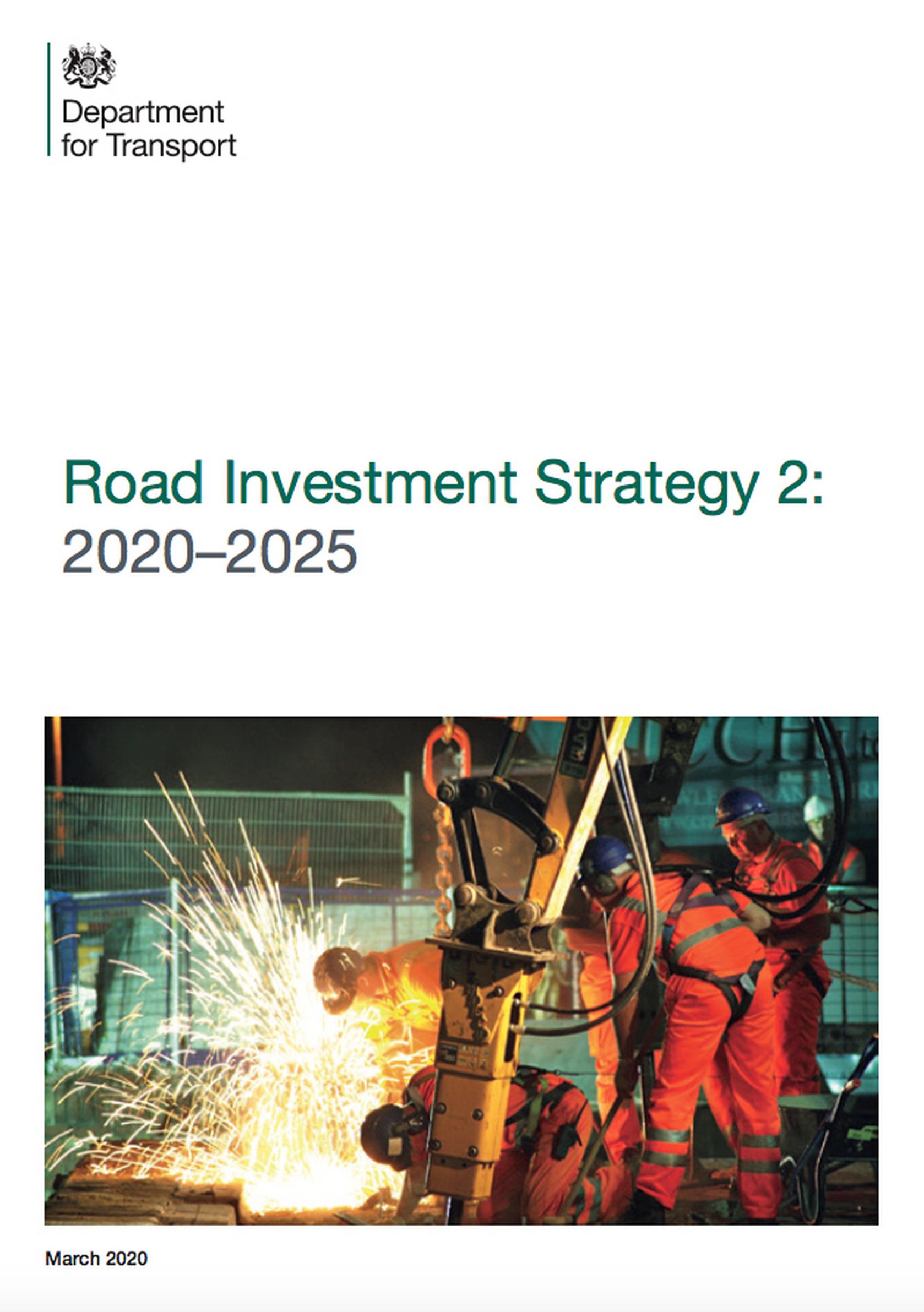 The case is being brought on climate change and air quality grounds and mirrors in key respects the successful case brought against the Airports National Policy Statement (NPS) earlier this year. In that, the Court of Appeal ruled that the NPS, which supports a third runway at Heathrow, was illegal because it did not take account of the UN Paris Agreement on climate change of December 2015.

The Transport Action Network Ltd (TAN) is bringing the case against the road investment strategy. It is being represented by the same team from Leigh Day solicitors that won the airports NPS case, David Wolfe QC and Pete Lockley.

TAN has launched a fundraising exercise, seeking to raise at least £38,000 and preferably £100,000 via the Crowdjustice platform to cover legal fees. This week it said it had raised £25,000 from 750 people in the first seven days.

TAN director Chris Todd said: “The DfT has fiddled with ideas like green number plates while the planet overheats. Road transport is now the single biggest source of UK carbon emissions. How can the DfT claim to take climate change seriously when it is set to burn billions on the ‘largest ever roads programme’ to make things worse?”

The DfT published RIS2 on 11 March, soon after the Court of Appeal made its ruling on the Airports NPS.

TAN points out that on 26 March the DfT then published its Decarbonising transport: setting the challenge policy paper in which transport secretary Grant Shapps said that public transport and active travel would become the “natural first choice for our daily activities” and “we will use our cars less” (LTT 03 Apr).

Said Todd: “In the last few weeks ministers have said they want to go ‘further and faster’ to tackle climate change, finally recognising we need ‘to use our cars less’. Planning for RIS2 started in 2015, quite simply a different era. This massive roads programme is like a juggernaut that’s out of control. We have no choice now but to go to court to prevent an unfolding disaster.”

Leigh Day’s judicial review claim challenges the “lawfulness of the adoption and publication of RIS2” by the Secretary of State. The strategy commits the Government to spend £27.4bn on the strategic road network in the period 2020/21-2024/25 (LTT 20 Mar). This includes £14bn for capital enhancements. The funding comes from the new National Roads Fund of ringfenced Vehicle Excise Duty.

On climate change, Leigh Day points to the legal framework created by the Paris Agreement, which the Government signed in December 2015, and the amendment to the Climate Change Act 2008 last June that commits the UK to achieving net zero greenhouse gas emissions by 2050.

“The Paris Agreement enshrines a firm commitment to restricting the increase in the global average temperature to ‘well below 2°C above pre-industrial levels and [to pursue] efforts to limit the temperature increase to 1.5°C above pre-industrial levels’”, Leigh Day explains, “as well as an aspiration to achieve net zero greenhouse gas emissions during the second half of the 21st century.”

Leigh Day continues: “According to the UK Government’s own statistics, transport is now the largest sector for UK greenhouse gas emissions (27 per cent), of which road transport accounts for over 90 per cent.”

It points to data that TAN has obtained from the DfT showing that the “combined additional carbon created by five key schemes funded under RIS2 alone amounts over the next 60 years to approximately ten million tonnes”. The schemes are: the Lower Thames Crossing; A27 Arundel bypass; the A417 Missing Link; the A303 Amesbury to Berwick Down (Stonehenge) improvement; and the A5036 Port of Liverpool access project.

Leigh Day says that, though the Secretary of State has “considered” climate change in preparing RIS2, “he has not lawfully taken into account the net zero target before publishing RIS2”. Nor has he considered “whether RIS2 is in line with the Paris Agreement: the Paris Agreement is not mentioned at all in RIS2”.

“These errors flowed from the fact that the research phase documents that informed the publication of RIS2 were either completed prior to, or based on assumptions and data predating, the net zero target coming into force.”

Leigh Day points to the DfT’s decarbonising transport policy paper, which identified a gap of 16MtCO2e in 2032 between transport emissions on current policies and those set out in the 2017 Government’s Clean Growth Strategy (LTT 03 Apr).

They say the Government appears to believe road building is compatible with the net zero objective because all vehicles will soon be zero emission.

“Since electric vehicles will be ‘zero emission’ by 2050 – the reasoning seems to run – any number of them can be compatible with the net zero target for 2050.”

But, says Leigh Day, “since the sale of new conventional cars and vans is currently only to be ended in 2040 (and with the consultation on bringing that date forward, proposing an alternative date of 2035), it is obvious that providing additional road capacity will increase emissions from road transport in the short to medium term, making it all but impossible to meet the UK’s statutory obligations in relation to the fifth carbon budget.

“In short, by treating (in the context of RIS2) electric vehicles as a silver bullet in meeting the 2050 obligations, the secretary of state has unlawfully failed to consider his medium-term statutory obligations relating to carbon budgets.”

Turning to the Paris Agreement, Leigh Day says: “By adopting the approach that he did in RIS2 of focusing on the ability of electric vehicles to deliver the net zero target in 2050, the secretary of state unlawfully failed to take into account the UK’s commitments and objectives under the Paris Agreement.

A second aspect of the climate change ground in the legal challenge concerns the Government’s failure to developed a metric to measure the carbon emissions from users of the strategic road network, despite repeated promises to do so since 2015.

Moreover, the RIS2 only sets Highways England a target to reduce its own emissions, which Leigh Day says is a “departure from what was promised”. “Such a breach of legitimate expectation vitiates the RIS2,” it says.

The second ground for the challenge concerns the air quality legal framework.

Leigh Day says RIS2 contains no evidence to demonstrate that investments will not cause locations to exceed legal limit values for pollutants such as nitrogen dioxide, as set out in the EU 2008 air quality directive, implemented into domestic law by the Air Quality Standards Regulations 2010.

RIS2 states that the Government expects all the locations  “within Highways England’s control will meet air quality targets before the end of RIS2, and emissions of the key pollutants will keep falling”.

Says Leigh Day: “What is notably missing [from RIS2] is any evidence that the road expansion schemes funded by RIS2 will not cause levels of those pollutants to exceed limit values and/or will not jeopardise the maintenance of levels in compliant zones.

“Properly applied, regulation 17 of the 2010 Regulations prohibits the material worsening of air quality anywhere across the Strategic Road Network and across roads with exceedances that feed into the SRN, which means that RIS2 cannot cause any new breaches of the limits or the slowing down of any progress already made to reducing levels below the limit values.

“Regrettably, the Secretary of State has both failed to adequately assure himself that such material worsening of air quality will not be a consequence of the schemes funded by RIS2 going ahead, and to consider whether compliance with emission limits will not be jeopardised by RIS2.”

Leigh Day also says the Government was legally required to prepare a strategic environmental assessment of RIS2 before it was adopted.

“This should have involved an evaluation of cumulative effects (such as the carbon impact of the significant greenfield house building programme that RIS2 will facilitate) and reasonable alternatives (such as investing in sustainable transport that in turn unlocks compact, public transport orientated housing, instead of increasing road capacity).”