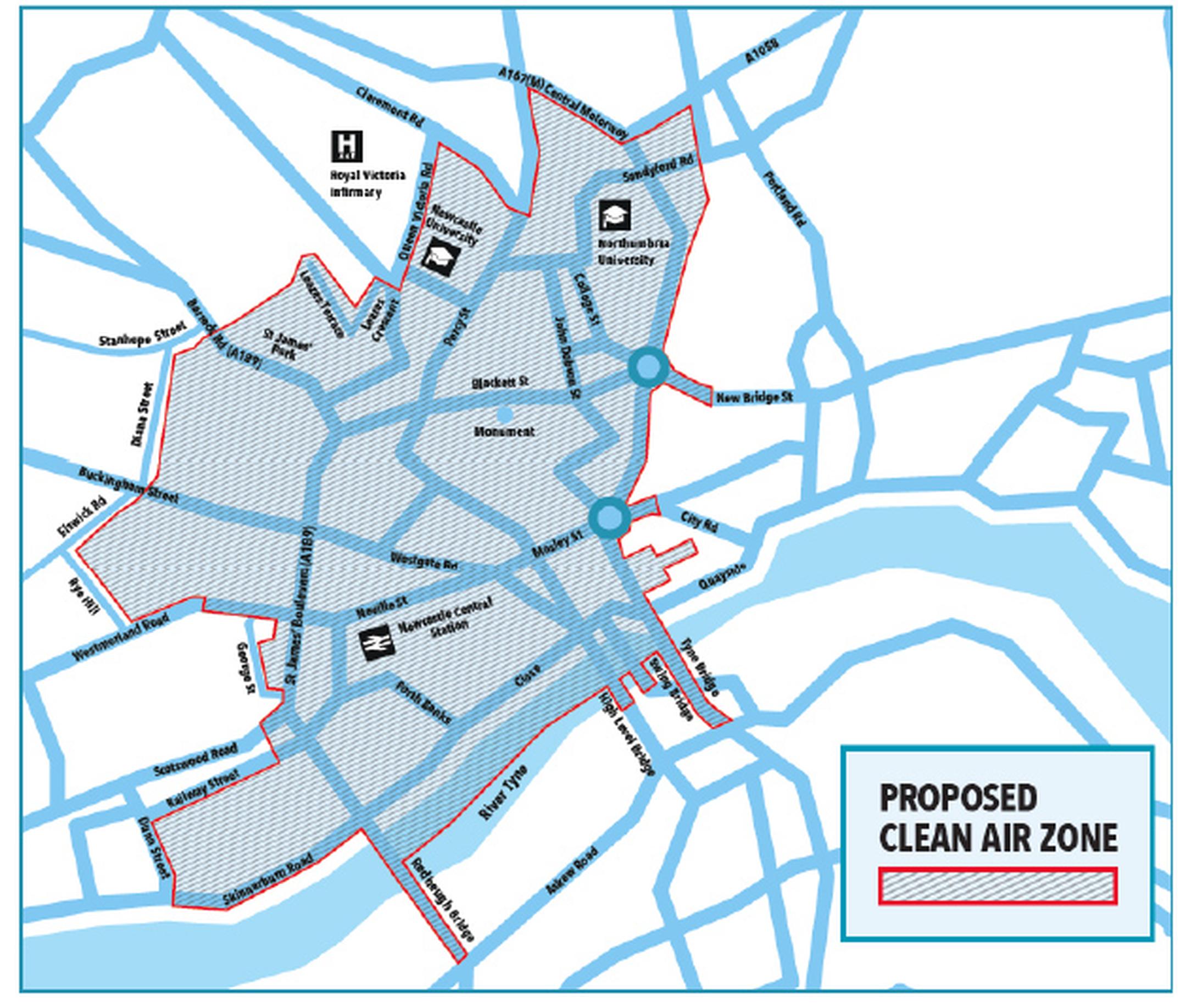 Councillors on Tyneside will be asked to approve plans for a Class C charging clean air zone (CAZ) in Newcastle city centre  next month, together with road capacity reductions on the Tyne Bridge and Central Motorway.

The cabinets of Newcastle and Gateshead councils considered the clean air plan proposal last week, ahead of full council meetings next month where councillors will be asked to approve submitting the plan to Government.

The Class C CAZ could be implemented in January 2021 and will see charges introduced for non-compliant buses, coaches, taxis, private hire vehicles, HGVs and vans. Charges are expected to be  £50 a day for HGVs, buses, and coaches, and £12.50 for other vehicles.

Other elements of the clean air plan include:

Some details of the clean air plan are still awaited. The councils are considering the scale and scope of CAZ exemptions, particularly how ‘sunset periods’ will apply to taxis, private hire vehicles and commercial vehicles, and what vehicles should be exempt from the CAZ.

Newcastle’s head of transport, Graham Grant, told councillors last week that, even with access to grant funding from Government, bus operators had said they would be unable to upgrade their vehicles in time for a 2021 CAZ start date. Operators had warned that charges “could negatively impact on the number of services they were able to run and the cost of services”.

The councils’ original plan featured a Class D CAZ that would have seen charges imposed on cars, or a low emission zone for buses, lorries, taxis and private hire vehicles and tolls for all vehicles crossing the Tyne, Swing and Redheugh bridges connecting Newcastle city centre and Gateshead (LTT 01 Mar & 24 May).

These proposals attracted strong criticism from the public, however (LTT 19 Jul), prompting the councils to launch a fresh consultation this autumn on revised proposals (LTT 27 Sep).

Grant said the new plan was expected to deliver air quality compliance just as quickly as the original proposal, partly because the modelling assumptions have been changed.

“Further discussions with Government led to adjustments in the projections of how many diesel vehicles were expected to be on the city’s roads in future years, taking into account lower diesel vehicle sales (as opposed to projecting growth). This reduced the modelled pollution levels for all options and opened up the possibility that a lower level CAZ with additional measures would deliver similar improvements as the original options but with less rerouting or negative economic implications.”

Grant said the introduction of charges on all motorists could not be ruled out. “The authorities are proposing not to charge private vehicles in the first year of a charging scheme, [but] we must keep all potential measures under consideration.

“The authorities are required to consider extending or upgrading any CAZ to incorporate private vehicles if compliance [with the EU limit value] is not achieved, or could do so in response to other environmental concerns.” Newcastle and Gateshead have both declared climate emergencies.

If the councils’ bid for Government funding is successful, they propose to launch grant schemes to help fund vehicle upgrades.