Government support for police ‘close pass’ operations, private sector money for childrens’ cycling training, a new alliance of cycling and walking organisations, and plans to create a network of more than 1,000 miles of active travel routes across Greater Manchester were all announced at Cycle City Active City. 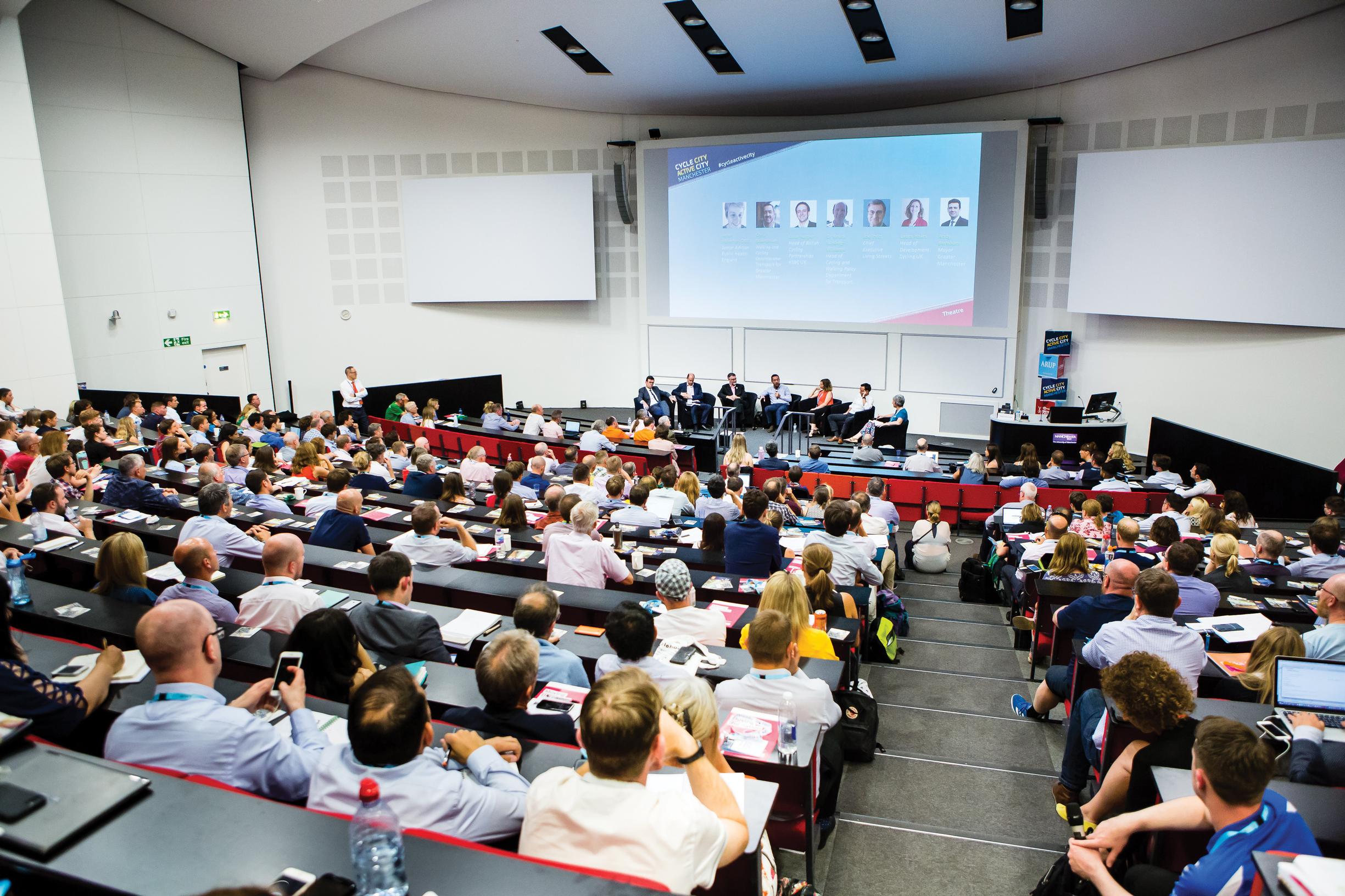 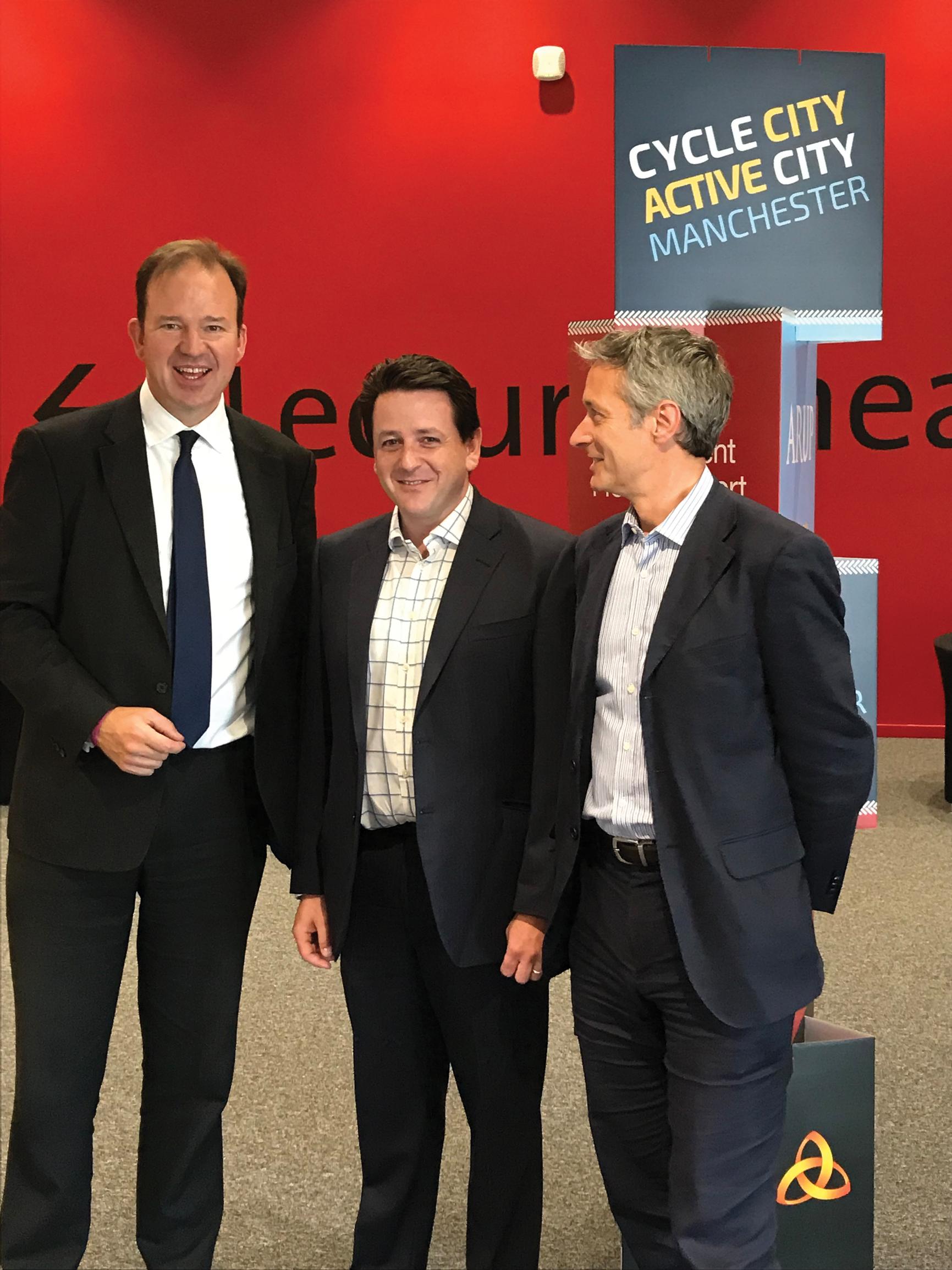 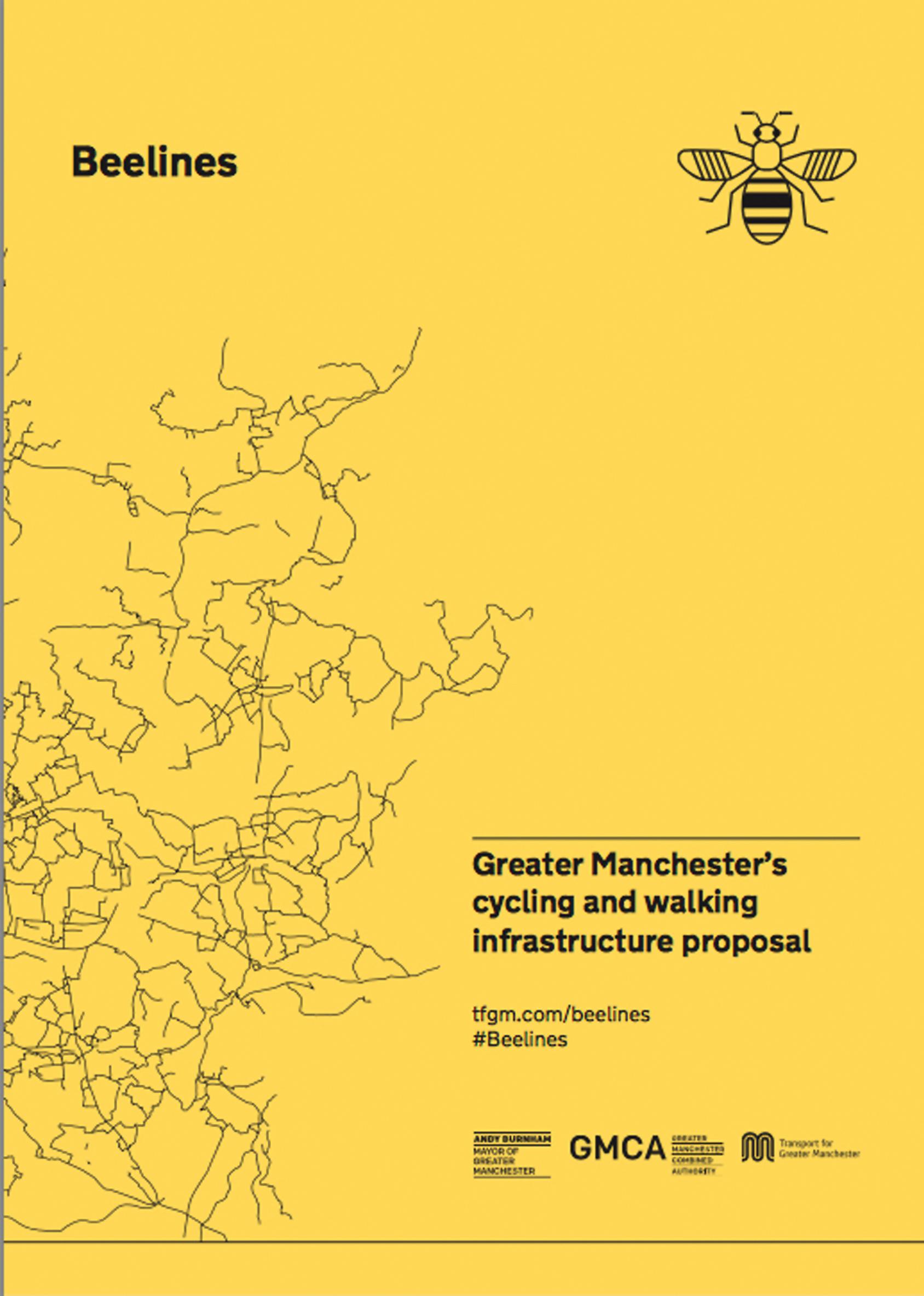 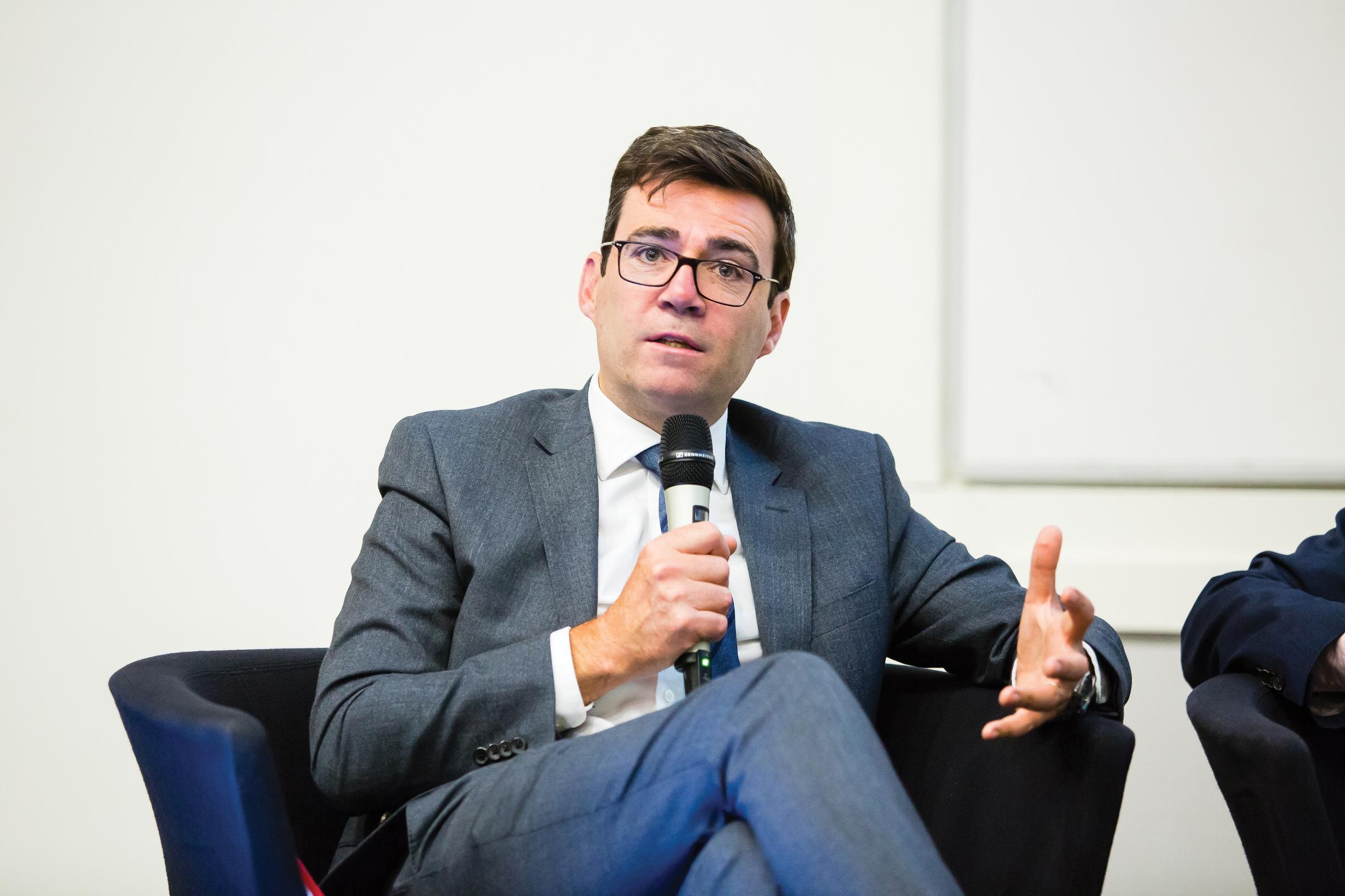 Plans for a cycling and walking network across Greater Manchester, made up of more than 1,000 miles of routes, was unveiled at Cycle City Active City last week. The ‘Beelines’ network will include 75 miles of segregated bike lanes as well as 1,400 safer road crossings on most routes and 25 ‘filtered neighbourhoods’ where priority will be given to people over motorised traffic.

Beelines was launched at Cycle City Active City by Chris Boardman, Greater Manchester’s cycling and walking commissioner. He said: “The proposed network is not for people who already cycle or walk for the majority of their journeys. Its focus is on two-thirds of people who currently use their car as their main mode of transport.”

The project has a combined budget of around £500m. This includes £160m from the government’s Transforming Cities Fund, which the Mayor of Greater Manchester Andy Burnham has allocated to the project. The mayor’s decision to allocate £160m means that Greater Manchester’s spend on cycling and walking is now £15 per head, “almost putting us on a par with the great liveable cities like Amsterdam and Copenhagen”, said Boardman.

At Cycle City Active City Andy Burnham told delegates: “I couldn’t think of any other way of spending £160m on transport and getting a return on that investment in terms of tackling congestion, improving air quality, improving physical and mental health and improving the public realm.

“On top that, it will benefit the economy. Quality of life will become crucial in attracting the best talent coming out of universities. Unless you provide modern 21st living that has cycling and walking at its heart you will not attract most people to live here.”

He added: “I can’t think of a better way of benefitting every man, woman and child in Greater Manchester in a reasonably short space of time. Investing money in walking and cycling will have a much bigger impact on a much bigger scale than if that money had gone on building roads or buying trains and trams.”

The project is designed to be largely reliant on wayfinding signage and paint on the ground, so that it will be “cost effective and fast to implement” says the Beelines report. It estimates that the entire network could be completed by 2023.

Some routes on quieter streets will require traffic management and design interventions, the report states. “However, most will initially require very little intervention. Funding will be focused on side road interventions.”

Busier roads, meanwhile, will require major interventions, says the report. “In most cases, standard junction design approaches will not meet quality thresholds. Ensuring these approaches are of a high standard is critical if we are to create trust in the network. Innovative approaches to junction design will be required that meet the level of service needed to enable significant modal shift.”

New crossing points will be introduced in town centres, including parallel signalised crossings, parallel zebra crossings, toucan crossings and priority crossings. More cycle parking will be installed on the network, says the report.

Beelines will connect quiet streets in Greater Manchester, offering the most direct way to new crossing points “to get people across busier roads”, said Chris Boardman. “People using these routes will see new, distinctive signage which will be a marker of quality and will encourage them to make more journeys by bike or on foot.”

Maps showing the proposed plans for each local council area in Greater Manchester have been published on the cycling and walking commissioner’s page on the TfGM website.

The proposed routes and crossing points have also been published on open data website mappinggm.org.uk

An updated version of the Beelines map will be published later in the year.

The government will encourage police forces to tackle ‘close pass’ driving, the transport minister Jesse Norman has announced. Speaking at the Cycle City Active City conference last week, the minister praised the work of West Midlands Police, which was the first force in the UK to carry out ‘close pass’ operations.

Jesse Norman visited police officers Steve Hudson and Mark Hodson, who pioneered the West Midlands operation. “It has been a very effective programme in raising awareness and understanding and reducing casualties,” said Norman. “We are going to build on the close pass initiative that has been pioneered by West Midlands Police. We will be providing materials and support to police forces so that more drivers can be made aware of the need to leave safe distances when passing cyclists.”

However, the minister said it was not in the DfT’s remit to insist that police forces carried out enforcement operations against close pass drivers. Instead, the emphasis would be on educating drivers. “The fact that national government and the DfT is committed [to supporting close pass operations] will give it an extra boost,” he said.

West Midlands Police has been running close pass operations in Birmingham since August 2016. Plainclothes officers on bikes, who are equipped with cycle-mounted cameras, radio details of close pass drivers to colleagues who intercept them at a designated holding point further along the road.

However, some drivers have been prosecuted, receiving £100 fixed penalty notices and three points on their driving licence.

West Midlands Police says the number of cyclists killed or seriously hurt on the region’s roads has dropped by 20% since the launch of close pass operations.

“The idea is to try and permeate that sense of understanding for all road users right to the top of the teaching tree. We think that this could become the basis for greater understanding and empathy among the next generation of road users,” he said.

Duncan Dollimore, head of campaigns at the charity Cycling UK, said: “We have long argued that the driver training and testing processes should ensure that drivers are made aware of and understand both cyclists’ needs and their safety.

“Training the trainers, and embedding cyclists’ safety in the mindset of driving instructors, is a fantastic first step towards achieving this. But education and awareness on its own is not enough, which is why close pass operations by police forces have proved so effective in places like the West Midlands. Cycling UK looks forward to working with the DfT, as we have with willing police forces, to try to make sure this initiative helps lead to close pass policing being the norm, not the exception.”

A manifesto demanding that everyone should have the right to “live, work and play in places that are healthy and vibrant” where walking and cycling are “the natural  choice for short journeys” was launched at Cycle City Active City.

The Moving the nation document has been published by a new alliance made up of the Bicycle Association, Cycling UK, the Ramblers, British Cycling, Living Streets and Sustrans. The alliance is calling on the government to take five steps:

Sustrans’ chief executive Xavier Brice said: “We are  calling on the UK government to take urgent action, to unlock the incredible benefits in terms of health and economy which walking and cycling can deliver.”

The DfT received over 13,000 responses to its Cycling & Walking Investment Strategy safety review, transport minister Jesse Norman revealed at Cycle City Active City. Feeback to the review, which ran from 9 March and 1 June, came from online submissions as well as four workshops in Birmingham, Bristol, London and Manchester, organised by DfT and Landor LINKS. “This has been a priceless evidence gathering process,” said Norman. The DfT said it will publish its response when it has looked at the submissions.

Norman said: “This extra money will expand Bikeability so that more children can cycle safely and confidently on local roads, and we welcome the new partners Halfords, which will provide additional funding for a further 25,000 Bikeability training places.

“The benefits of cycling and walking are enormous. For people, it means cheaper travel and better health. For businesses, it means increased productivity and increased footfall in shops, and for society as a whole it means lower congestion, better air quality, and vibrant, attractive places.”

At the end of 2015 DfT pledged £50m for Bikeability over a four-year period up to 2019. According to the DfT, it costs £40 for a child to receive cycling training.

DfT said that in 2016/17 Bikeability provided 350,000 training places for primary school children, but could not give figures for 2017/18: “These figures are still being compiled,” said a DfT spokesperson.

The cycling training programme is based on the government’s national standard for cycle and instructor training. Beginners initially ride in traffic-free environments before progressing on to local roads to learn how to negotiate busier, multi-lane roads and complex junctions. Graham Stapleton, chief executive at Halfords, said: “We are delighted to partner with the Bikeability Trust, and we are really proud to be able to help 25,000 more children to discover the joy of riding a bike. Safe cycling unlocks confidence and encourages daily activity. By helping more children cycle more safely and more often, families will be inspired to get out on their bikes.”

A YouGov report for Halfords revealed 56% of parents want cycling safety added to the National Curriculum so that all children are trained to cycle “competently, confidently and proficiently' on the roads”.

The research also found that 33% of parents think there should be a special cycling highway code for children; 60% of parents support the proposition of more money being pledged towards cycling safety for children, even if it is at the expense of other services; 35% of children learnt to cycle while at primary school; and 12% of British families with children under 12 have at least one family member who does not know how to ride a bike.

Halfords said it will provide free bike safety checks for every child taking part in a Bikeability programme, as well as for their parents, teachers and trainers.

The Bikeability Trust’s chief executive Paul Robison said: “Working with Halfords will give us the chance to extend our scope, to reach thousands more children and help raise awareness of cycling as an essential skill.”