The political impetus to deliver ambitious cycle infrastructure schemes in the capital has been lost since Sadiq Khan came to power in May 2016, according to Andrew Gilligan, who served as cycling commissionerto previous mayor Boris Johnson. 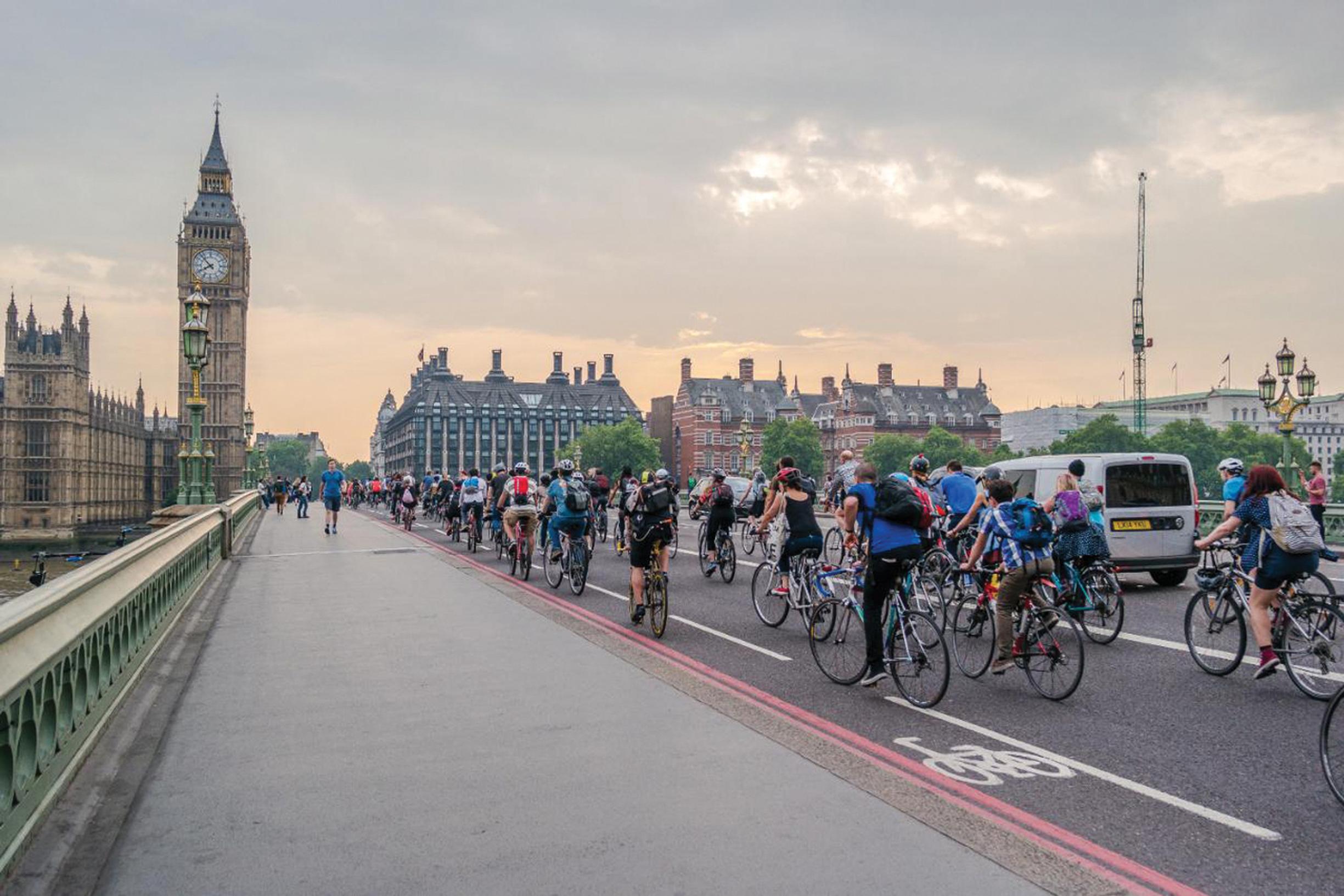 Look at the headlines and it’s tempting to think everything is rosy for cycling in the capital: soaring volumes of trips, record numbers of hires on the Santander cycle scheme, and mayor Sadiq Khan has just pledged a 28% increase in funding for  borough cycling schemes over the next five years (LTT05 Jan). Yet Andrew Gilligan, who served as cycling commissioner to Khan’s predecessor, Boris Johnson, says the picture is a lot bleaker if you scratch below the surface. ‘He would say that wouldn’t he?’ may be the obvious retort, but his assessment, submitted to the London Assembly transport committee’s cycling inquiry, is worth reading.

Gilligan believes the capital’s cycling investment programme has “stagnated”. “Most of the designed, modelled and consulted-on projects we left the new mayor have been stalled or cancelled. The few which proceed lack energy and vigour. The only exceptions are in the mini-Holland boroughs of Enfield and Waltham Forest, where there is strong political leadership.”

Most new cycle infrastructure schemes proposed since Khan took office “have been substantially watered down from the versions being worked on by us”. “With only one exception, CS9 [Olympia to Hounslow], they will deliver little of benefit for cycling and some will harm it. In the only scheme to which there appears any real mayoral commitment, the pedestrianisation of Oxford Street, cycling is to be banned.”

Gilligan says the superhighways installed by Johnson succeeded in increasing overall movement capacity on the roads. “Only a fortnight after their opening, the superhighway roads were already carrying five per cent more people in the same space than they were before. During the rush hour the Blackfriars Bridge track, which takes up about 20 per cent of the roadspace, now carries 70 per cent of all traffic on the bridge and (counting passengers in buses) about 45 per cent of all people travelling on the road. The Embankment track, which takes up one lane of this four-lane road, now carries more traffic in rush hour than the other three lanes put together.”

The programme required political guts to deliver, and Gilligan doesn’t think Khan has the courage to take on the inevitable critics of schemes that reduce road space for general traffic. Citing Khan’s comment that “what I do not want is for there to be confrontation” about cycling schemes, Gilligan says: “At face value this appears to rules out anything serious for his mayoral term. If the new administration is searching for some formula that can make cycling schemes acceptable to everyone, they will waste a lot of time (as, in fact, did we) finding that this municipal Philosopher’s Stone does not exist.

“Schemes that make a meaningful change to the status quo will nearly always have majority support, but will never be unopposed; and much of that opposition will be highly confrontational. We learned, in the end, that noise was not the same as numbers. London has the country’s lowest levels of car use. Most Londoners want and would benefit from less motor traffic. Our cycle schemes invariably won between 60 and 85 per cent support in our consultations. Once schemes were done, and everyone could see the benefits, even the opposition that there was tended to melt away.

“You should, and we did, consult extensively, build as much consensus as possible, work to mitigate schemes’ effects on other road users, and change schemes to take account of reasonable objections while not sacrificing their benefits. But you should also be aware that much opposition can never be placated, however hard you try. You can, of course, avoid opposition by not proposing anything meaningful for cycling, which, with one exception, appears to be the current approach.”

Gilligan says Khan inherited nine TfL-led schemes (superhighways and Better Junctions cycle safety projects) at advanced stages of implementation. “All had been designed and traffic-modelled. All had been through formal public consultation, receiving the support of substantial majorities. All except one should have started building in 2016. Most should have been finished, or almost finished, by now.” But he says work on all the schemes ground to a halt during the first nine months of Khan’s term. “Work on six of the nine has still not resumed. Nineteen months on, they are either formally cancelled or remain in limbo.” The three schemes that are proceeding – two extensions to superhighways and a junction scheme – require “little or no roadspace reallocation”.

“Among the six stalled projects, perhaps the clearest test for the mayor will be the  Cycle Superhighway 11 proposal to close gates to Regent’s Park, making it harder to use as a traffic rat-run,” says Gilligan.

Khan has launched consultations on a number of projects that were being prepared during Johnson’s term. “With one exception, Cycle Superhighway 9 [CS9], the proposals fall below, often far below, the standards of our administration and represent a significant watering down of the plans we prepared for these sites,” says Gilligan. “Even the consultation version of CS9, though still an excellent scheme, has been shortened by 40 per cent over our plans. The other superhighway to have been consulted on, CS4, has been mutilated – shortened by around 80 per cent, no longer reaching any major destination and cut into two unconnected pieces, separated by the (untouched) Surrey Quays gyratory. A scheme on the A4 will replace sections of segregated cycle track with shared space.

“The proposals for Camberwell Green, Baker Street and Fiveways (Croydon) offer nothing of value for cyclists and make no meaningful change to the car-dominated status quo. In the proposals for Waterloo Imax and Nine Elms Lane, disbenefits for cyclists outweigh the benefits. At Lambeth Bridge the balance is marginally the other way.

“Seven of the most important schemes in our ‘Better Junctions’ programme may have been cancelled altogether,” says Gilligan. “They do not appear on the map or list of sites issued with the relaunched and renamed ‘Safer Junctions’ programme in April 2017.” The schemes are: Bow Roundabout, King’s Cross, Marble Arch, St Paul’s gyratory, Borough High Street/Tooley Street, Great Portland Street and Woolwich Road.

A TfL spokesman told LTT that Khan’s Safer Junctions and Johnson’s Better Junctions programme used different selection criteria to identify priorities. He said TfL had delivered improvements at one of the seven (Bow roundabout, though not necessarily of the sort Gilligan had in mind, and TfL had aspirations to make improvements at another four. For the other two, there are no current plans).

Gilligan says cycling is “not even an afterthought” in the mayor’s plans for Oxford Street. “The eastern end of the street, in particular, is a busy cycle route used by more than 5,000 cyclists a day. However, cycling on Oxford Street is to be banned. Cycling is given only three sentences in the pedestrianisation consultation materials: a vague promise of alternative parallel routes on a street, to a timescale, and to a standard as yet unspecified. East of Oxford Circus, there is in fact no nearby parallel street.”

Gilligan believes Transport for London’s ‘Healthy Streets’ agenda is nebulous. “It is not clear whether ‘Healthy Streets’ really means anything. Several new proposals, such as Camberwell Green, are explicitly badged as “part of the Healthy Streets programme” despite doing little or nothing for cycling or walking. In these schemes, at least, Healthy Streets amounts to little more than the status quo with nicer paving slabs.”

Cycling has a lower profile under Khan than Johnson, he says. “My successor, Will Norman [London’s walking and cycling commissioner], is not, as I was, a mayoral adviser but a middle-ranking employee of TfL. [Furthermore] It is notable that, unlike his predecessor, Sadiq tends not to appear at launches or events involving cycling, leaving them to Val [Shawcross] or Will.”

The Quietways and central London grid programme “appears moribund”. “Quietways 1 aside, the programme has consisted largely of rebadging existing 1990s-era London Cycle Network routes and claiming them as new routes. Sometimes Quietway signs have been painted on busy, wholly unsuitable roads, which were never part of our plans. For instance, Waterloo Bridge was designated a Quietway.” Gilligan says the problems with the Quietways programme stem not only from a “lack of impetus and political will at City Hall but also in the boroughs on whose roads these routes mostly run”. “Most boroughs have been unwilling to allow any meaningful change to their roads. A few boroughs are willing but lack the capacity. Only a handful – perhaps five or six of the 33 – have both capacity and willingness.

“It is strongly recommended that the Quietway programme be cancelled and the money diverted to the handful of boroughs that are willing to do something serious for cycling,” says Gilligan. He praises the mini-Holland schemes in Enfield and Waltham Forest, and Newham’s gyratory removal project in Stratford, but says they are “the only points of light in a bleak picture”.

Asked about Gilligan’s paper, a spokesman for the mayor said: “The mayor is absolutely determined to make cycling safer and easier for all Londoners. That’s why he’s providing more investment in cycling than ever before and has put walking and cycling at the heart of his strategy for the future of London’s transport network. New infrastructure is being delivered with the expansion of East-West and North-South cycle superhighways, and major improvements at junctions, including Westminster Bridge South. Consultations have just been completed on two new superhighways that will add nearly 6km (over three miles) of new segregated track to the capital’s roads. We’re also now identifying the next generation of cycling provision that will ensure we deliver a long-term cycling network right across London.” The spokesman added that, with the TfL road network making up only 5% of London’s roads, it was “vital that we work with boroughs to build improvements on their roads”.