A new tool that identifies routes with the greatest commuter cycling potential will be presented at Cycle City Active City. Here the team behind the Propensity to Cycle Tool (PCT) explains how it works. 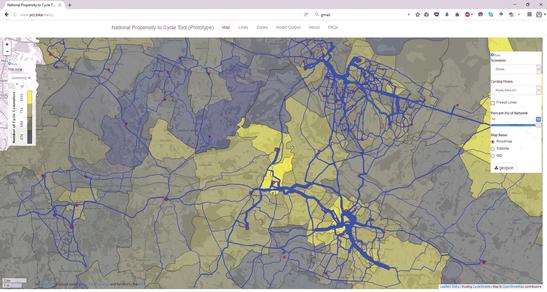 This year the government will lay out a process to be followed by councils in planning walking and cycling routes through the Cycling and Walking Infrastructure Plans. To help councils decide where to build these new routes we have developed the Propensity to Cycle Tool (PCT).

The model, funded by the DfT, helps planners to identify areas of greatest unmet demand for non-motorised modes. It uses origin-destination data, initially commuting data from Census 2011, and allocates trips to the route network to identify potential demand along specific roads (see below).

Unlike previous tools, the PCT is open source and freely available to the public over a browser. Developing the tool has generated new evidence, revealing England’s substantial unrealised cycling potential amongst women and older people.

The PCT uses scenarios, some more ambitious and some shorter-term, to highlight cycling potential. The Go Dutch scenario asks ‘what would happen to cycling if English people were as likely as Dutch people to cycle a commute trip?’ Here, likelihood of cycling is based on trip distance and hilliness. It also considers the potential of e-bikes to allow cycling for longer or hillier trips. There are two other scenarios; one doubling cycling in line with the government target, and one where women become as likely to cycle a given trip as men.

All these scenarios enable the PCT to estimate and visualise where commuter cyclists might live, helping planners prioritise residential interventions.

Even more exciting, the PCT can indicate where these cyclists might ride, using the Cyclestreets routing algorithm. Because distance is so important for cycling, the team prioritised what Cyclestreets identifies as the ‘fastest’ routes. These may not be the currently used routes, due to lack of provision. However, if we are to grow cycling, our data analysis and evidence reviews show we need routes that are direct as well as high quality. Increasing distance means a drop-off in cycling, particularly for women and older people.

By using the PCT, councils and other stakeholders will easily visualise and estimate the top cycle commuting flows in their areas, under different scenarios. This will help in planning cycle track capacity, for instance. Ultimately, the PCT will help stakeholders plan good quality cycle infrastructure in the right place.

Find out more about the PCT at Cycle City Active City