“Disappearing Traffic” – the report that didn’t quite disappear 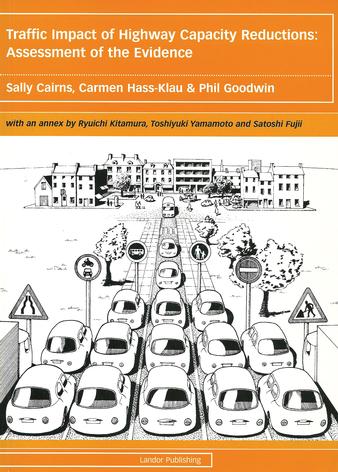 It’s not many times in a career that one has the chance to work on a piece of research that earns descriptions like ‘classic’ or ‘seminal’, so allow me some distant retrospective pleasure in having had the opportunity to work with Sally Cairns and Carmen Hass-Klau on a book called Traffic Impact of Highway Capacity Reductions: Assessment of the Evidence, which was published by Landor (the publishers of LTT) as long ago as 1998, sold quite well, had a distinct effect on transport policy changes in the 1990s, but went out of print years ago. Here it is, at last, available again.

There is a responsibility in the world of research – especially, but not only, publicly-funded research – to make sure that the information is not only disseminated but also kept accessible and in print. I take that seriously, and have been embarrassed by my own failings in recent years to do so for this research. The problem – yes, I know it’s only an excuse – was that it was one of the last reports to be produced without a proper PDF at the time: the technology was a bit too awkward to handle some of the graphics and maps and especially large rather complicated tables that summarised the results. The book itself is a handsome production, but it has 261 full-size pages, bound, and it’s not a trivial task for busy people (without a budget for administrative support for such matters) to convert to digital form. Meanwhile the technology of scanning has improved and now, with the help of Rachel Aldred of the University of Westminster, it is back in as an online pdf – not a new edition, I should say, but the same edition as previously, the only difference being that the pages are images not paper. It is available at the Landor website, as shown below.

For those of you who have never heard of it, or only dimly remember it from a university library years ago, the core of the work consisted of real-life case studies in specific locations – about 150 sources relating to nearly 100 places, mostly urban, in the UK and 14 other countries. The projects included the pedestrianisation of town centres, bus or cycle lanes, also the experience of road closures due to maintenance or construction, and natural disasters such as earthquakes (an annex includes a long analysis by the late Ryuichi Kitamura, with Toshiyuki Yamamoto and Satoshi Fujii, on the effects of the Hanshin-Awaji earthquake of 1995). Together with these, the report included discussion of the theoretical background, the implications of the 1994 SACTRA report on induced traffic, the invariably misleading press coverage of planned reductions in road capacity – ‘Traffic Chaos Starts Next Week’ being the typical front-page headline, and ‘Road transport experts are still trying to figure out where the cars have gone’ being the inside story a week later. There was a review of the little- known emerging literature on travel behaviour change, including evidence on the innate variability of travel choices, and a discussion on policy conclusions. The results varied widely, of course, with a span from the longer term effects of large-scale pedestrianisation in Nurnberg – where the reduction in overall traffic was greater than the previous volume of traffic in the closed streets – to, at the other extreme, the UK ‘Six towns bypass project’ where town centre road closures were accompanied by expansion of bypass road capacity: in those cases the induced traffic from the bypasses was greater than the traffic reduction in the centre. On average, there was a reduction of 41% of the traffic on the treated roads, of which less than half reappeared on other routes, giving a net overall reduction of traffic volume of about 25% of the traffic that had formerly been using the treated roads. Reducing the effect of a few extreme cases, the median overall traffic reduction was 14%-16%.

From a policy point of view, this degree of traffic reduction was sufficient to enable the implementation of a number of projects reallocating road capacity from cars or general traffic to pedestrians, public transport and cyclists, which had been proposed in order to improve accessibility, emissions, health or economic viability, but had often initially been resisted on the recurrent argument that ‘the network can’t cope’. Recognition that the volume of traffic is not immutable proved to be important then, and still is.

There was a shorter companion report published at the same time by MVA, on the implications for modelling, which really does seem to have disappeared nearly without trace (the one exception that I can find being a citation in Boyce and Williams’ excellent 2015 book on Forecasting, which I reviewed in LTT 16 Oct 15).

It’s not an accident that the original idea for the project was from Steve Atkins, then at London Transport, and it was set up as a competitive commission. The Department of the Environment, Transport and the Regions (the incarnation of DfT at the time) subsequently joined in as a co-sponsor. The usual caveats that the views in the report were those of the authors alone were printed on the front page, but I can confirm that both London Transport and the DETR were pretty pleased about the report. The resources were supported by the Economic and Social Research Council, the Transport Studies Unit at the time being its designated ‘centre of excellence’, initially at Oxford and then at UCL.

As an intriguing post-script, some years later Sally Cairns, Steve Atkins and I did an update that was awarded a prestigious medal by the Institution of Civil Engineers as one of its best papers of the year. But with that exception, the really remarkable thing, to me, is that there has been no similar study in recent years to compile all the emerging evidence, which must dwarf the original 100 locations: more like 1,000 by now, I guess. There was a study published by the European Commission in 2004 (http://ec.europa.eu/environment/pubs/pdf/streets_people.pdf), a nice resource paper of references from Brisbane in Australia that includes some references up to 2011 (http://www.reductioninroadcapacity.info/1_10_Technical-resources.html), and references in Todd Litman’s On-line Encyclopedia http://www.vtpi.org/tdm/tdm56.htm. But there has been no large-scale update, nor – which is amazing when you think about it – does there ever seem to have been any substantial study anywhere to rebut or disprove the original findings. This is not to say they are universally accepted, of course. It is the way of such studies that disagreement usually finds its expression by ignoring, rather than disproving. But what a good idea it would be if the report’s 20th anniversary in 2018 should be marked by a review as extensive as the original. Two years should be enough to do it, if there is a sponsor sufficiently interested.