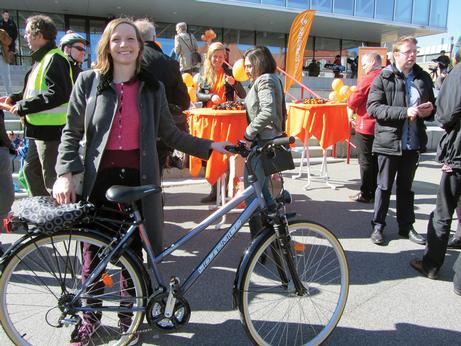 I’m currently working on the ‘Near Miss Project’, which looks at how everyday non-injury incidents affect cyclists. The level of carelessness and even hostility many cyclists experience are staggering. A classic example is the MGIF (Must Get in Front) driver.

The MGIF driver can’t bear to be behind a cyclist, and even if there isn’t enough room, they’ll squeeze past. They often then get stuck in traffic almost immediately. Perhaps many drivers don’t realise how terrifying it is to have your life put at risk by someone seeking a couple of seconds’ advantage.

Almost as frightening is the extent to which this is normalised. We asked people whether an incident would change their cycling behaviour. A few said they were considering giving up cycling; more said they would avoid a particular area, but many commented they now expected their lives to be put at risk by strangers on a regular basis.

Why do we – whether as perpetrators or victims – see the MGIF as normal? One reason, I’d argue, is that the very same anti-social attitude is embedded in tools and techniques for transport appraisal.

I’m talking about the benefit:cost ratio (BCR). While I've criticised transport forecasting and traffic modelling, ultimately I think these can help, so long as we accept forecasting is about what-ifs, not ‘Computer Says No’ (or Yes!). But cost:benefit analysis (CBA) is inherently more problematic. And writing this piece alongside looking at near miss data, I was struck by how closely CBA mirrors the worst kind of driving behaviour.

DfT guidance from December 2014 states that “values of travel time savings play a central role in transport appraisal”. The heart of the BCR is a calculation of how journey times might change because of a given scheme. Now I can appreciate one might want to try to forecast this, although we’ll often get it wrong, because people don’t behave like pre-programmed billiard balls (‘gravity models’ notwithstanding).

What’s deeply problematic is that monetised journey time predictions become the main way of deciding if projects are value for money. As David Metz has eloquently argued, saving seconds here or there is really not the point of expensive transport investment. The approach distracts attention from what really matters. This was brought home to me when a student, after listening to a guest lecturer on transport and health, said: “But when I’m looking at a project the travel time savings are here (indicating in front of him) and the health benefits over there (indicating the corner of the room).”

CBA trains planners to act like MGIF drivers. That’s what we’re doing when we add up lots of predicted seconds and come up with a very big number that we turn into millions and millions of imaginary pounds and say ‘yes’ to spending lots of real money on (usually) big road schemes, despite their multiple other disbenefits.

Those hypothetical seconds are for most drivers a hardly noticeable saving, a short-term and self-defeating gain (extra road capacity will fill pretty quick, even assuming there is any immediate gain). The transport planner becomes the person who cuts you up.

I can understand why lots of good people try to re-balance the game in favour of sustainable transport. HEAT, the World Health Organisation’s Health Economic Assessment Tool for walking and cycling, seeks to come up with very big numbers representing walking and cycling’s health benefits, to trump the other very big numbers representing car drivers in a queue for a few extra seconds.

But this doesn’t always work. The extension to London’s cycle superhighway route 2 (CS2x) produced a BCR of under 1 (‘costs’ exceed ‘benefits’) even with HEAT included. The main reason was the predicted journey time disbenefits for ‘general traffic’ (i.e. motorists). Big health numbers may work where there is no space taken from motor traffic, as with rail trail conversions where HEAT produced enormous BCRs. But once you take away motoring space it’s a different story. Because the overall system is so biased in favour of short-term motoring gains, the cycling schemes that appear ‘value for money’ will be those that don’t affect motor traffic capacity. In cities, that means ‘shared pavements’, taking space from another marginalised group instead (pedestrians). Or the narrow, unprotected infrastructure that’s miserably short of transformative.

Transport for London – credit to it – carried on with ‘CS2x’ regardless, arguing that much good stuff isn’t included, and possibly can’t be included, in a BCR. That’s true. But more than that: if centering travel time savings makes us anti-social, so does monetising ‘costs’ and ‘benefits’.

The lure of ‘big money’ is strong, but the numbers are poorly understood. Many people think ‘health economic’ benefits are savings to the NHS. They’re not. They’re based on the ‘statistical value of a life’, the economic value attached to years gained or lost. But NHS costs (and other costs, such as pensions) could go up if people live longer. That doesn’t make it a bad thing.

What kind of people are we, if pretending people are pounds and pence makes us value them more? Let’s say the ‘statistical value of a life’ is £1m. And some intervention will save three lives. Do you instinctively care more, if you hear ‘this will have a health economic benefit of £3m’, or ‘this will save three people’s lives’?

In my view, a humane society should encourage us to care about people’s lives. This includes economic well-being but the BCR tells us to care about imaginary sums of money, which could represent anything from drivers getting to work 30 seconds later to the death of a child.

We’d be more likely to make progress towards a sustainable transport system if we talk directly about real things we care about: if we talk about likely numbers of premature deaths, reductions in chronic illnesses, jobs created, levels of network reliability, or whatever it is in its own terms rather than turning everything into imaginary money. (Caveated with assumptions and uncertainties, as all predicted benefits or disbenefits should be).

Instead, the benefit:cost ratio replicates at the planning level an anti-social attitude, prioritising short-term gains for some at other people’s expense. If this is how our transport planning system behaves, should we be surprised if drivers act the same way?