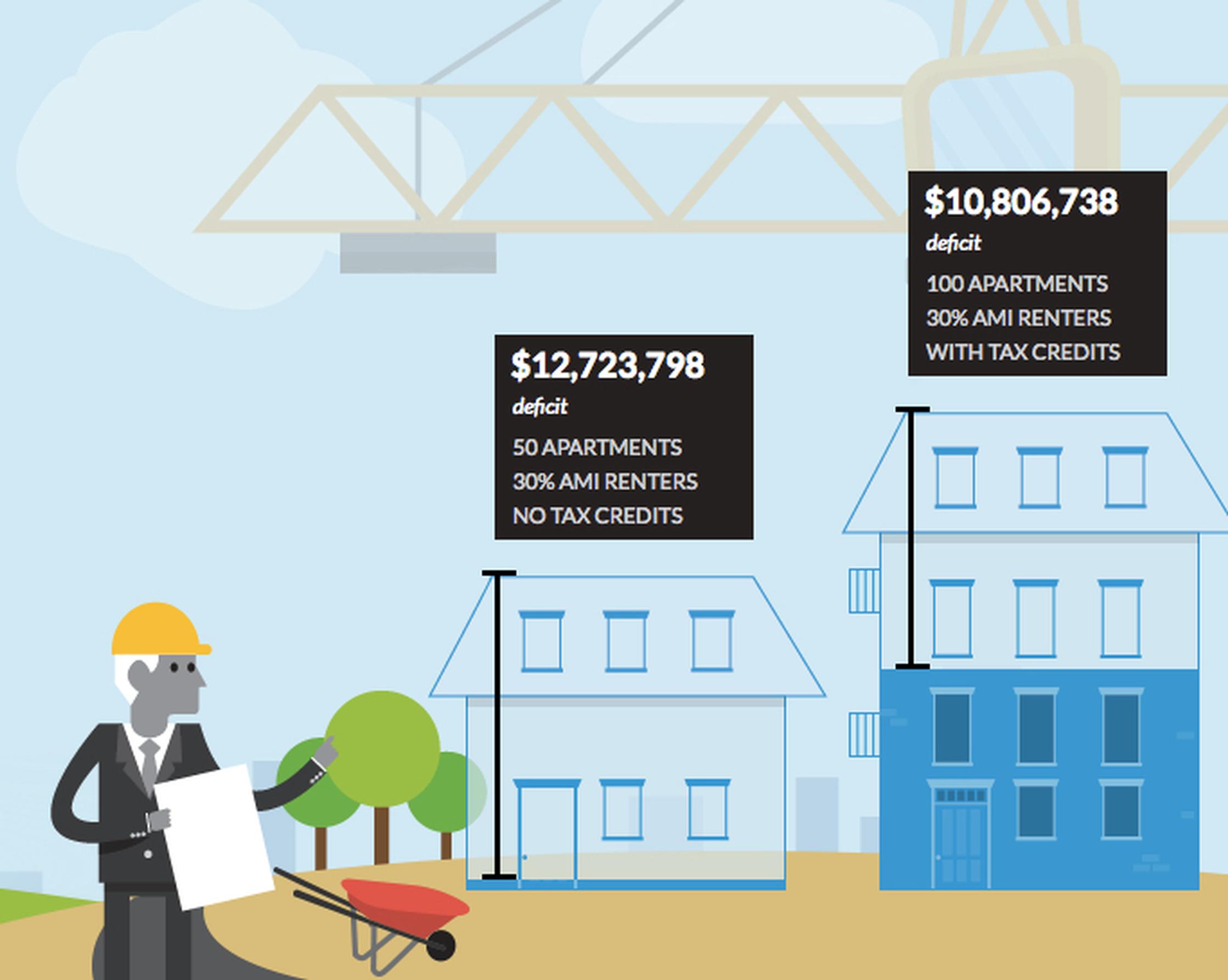 There is not enough affordable housing in the United States, or the UK. Or in most cities around the world. A new online ‘gaming-type’ tool created by the Urban Institute, and made possible by support from Housing Authority Insurance, Inc, aims to provide publicly-accessible fact-based analysis about affordable housing though a game-like interface. The new tool puts readers in the shoes of a developer, trying to build an affordable apartment building.

The new tool and accompanying feature is designed to answer that question, at least on a basic level, ‘to explain why the private market isn’t able to fill that gap,’ says Erika Poethig, director of urban policy initiatives at Urban Institute, talking to Next City.

For every 100 extremely low income households, there are only 29 adequate, affordable, and available rental units. That means two parents who both work minimum-wage jobs might wait years to find a safe, affordable place to live with their two kids. With such high demand, why aren’t developers racing to build affordable apartments?

It turns out building affordable housing is not particularly affordable. In fact, there is a huge gap between what these buildings cost to construct and maintain and the rents most people can pay. Without the help of too-scarce government subsidies for creating, preserving, and operating affordable apartments, building these homes is often impossible. This tool helps explain why.

Why is there a gap?

Development costs a lot of money. Developers rely on loans and other sources to fund construction before people move in and start paying rent. But developers can only get those loans and equity sources if the development will produce enough revenue to pay back the loans and pay returns to investors. The gap between the amount a building is expected to produce from rents and the amount developers will need to pay lenders and investors can stop affordable housing development before it even begins, leaving few options for the millions of low-income families looking for safe, affordable homes.

The problem is even more difficult when you consider the poorest residents. In many places, the rent the poorest families can pay is too little to cover the costs of operating an apartment building, even if developers could build that building for free.

To illustrate this problem, we examined data from the Denver metro area, which is experiencing a growth in rental housing demand but is not a traditionally high-cost city. The rental housing conditions in Denver are largely representative of other US cities.

Buildings cost money to build: to developers, those costs are often called uses. The first major use is the land developers plan to build on, called the acquisition cost. In some cases, developers are able to use public land to develop affordable housing. But when that option is not available, there is little a developer can do to lower the land cost.

The next major development cost is construction. While a developer could make some decisions to minimize construction costs, they are largely determined by market forces. Construction costs for the various Denver properties we analyzed ranged from $8.8 million to $17.6 million, making construction the largest single use.

A third use to consider is the developer fee. This fee is built into the calculation of the development costs because a developer uses it to pay all the costs of doing business: hiring staff, running an office, finding new opportunities, and more. After all, developers can't build if they aren’t going to earn any money from the project. Affordable housing developers can choose to defer a portion of the fee, leaving more money to cover development costs. The developers then recoup the deferred portion of the fee as rents are paid over time. This assumes, of course, that the gap is eventually closed, that the building is built, and that it operates successfully for years.

While these are three important uses a developer must account for, other costs include: design fees, construction loan interest, permanent financing fees, reserves, and project management fees. To cover the costs of building and operating a housing development, developers rely on a number of different sources of money. One important source is debt. Developers borrow money from lenders based on the amount they will be able to pay off over time.

Though the current market affects the terms of the loan, it’s unlikely developers will ever get a loan big enough to close the gap.

To demonstrate this, we look at vacancy rates, generally an indicator of market strength. In a weak market, it might take longer to fill an apartment after a renter moves out, so you’d expect a higher vacancy rate. Repairs to an apartment in between occupants and other factors can also lengthen vacancy. Since the size of the loan is based on the future rent a building is expected to bring in, lower vacancy rates—and the resulting increase in income—should increase the size of the loan. Below, you can adjust the vacancy rate to see its effect on the gap.

Besides the loan, developers might fund development through tax credits or grants. These sources come with caveats, however. The tax credits a building is eligible for depend on how much it costs to create the property and on how much rent the developer plans to charge relative to the average income in the area. Additionally, federal, state, and local governments have limited amounts for tax credits and grants, so even if a development qualifies, funding is not guaranteed.

Can we close the gap...with bigger loans?

It’s fair to ask at this point: if there aren’t enough grants or tax credits out there, why don’t developers just take out bigger loans to get the building off the ground?

In short, the lenders won't (and shouldn’t) let them. The size of the loan a bank will make depends on the project's net operating income (NOI), or the amount of money it expects to bring in from rent after accounting for operating expenses.

Lenders use NOI to calculate how much debt a developer will reasonably be able to pay off, accounting for interest and recognizing the developer still needs to have some cash flow to cover unexpected expenses.

But if the rent is set at rates that a working family can afford, that NOI is going to be quite low. It might even be less than zero if operating costs exceed revenue. The lower the NOI, the lower the size of the loan.

Can we close the gap...with more apartments?

So if you need a higher NOI to get a bigger loan, why not add more apartments to your building to increase the NOI? Though this will increase construction costs, some costs, like the acquisition cost and project management fee, may remain the same or increase more slowly, helping close the gap. You can see this to your right: the gap for the 100-unit building is proportionally smaller.

There are, however, some caveats. The first is a matter of economics. One of the big benefits of developing a building with more apartments is that tax credits might be more cost effective. But just because your project is eligible for tax credits doesn’t always mean you get them. Click the button below to see what happens when you don’t have the tax credit.

The other caveats are practical ones. Consider, first, that adding more apartments is only useful if developers can fill them, which might be possible in larger cities but harder as you move farther away from dense urban areas. Additionally, creating large communities of affordable housing has its social and economic downsides, particularly if it unintentionally segregates low-income families from the rest of a community. It all depends on the scale and shape of the particular place.

Can we close the gap...with higher rent?

Charging residents more in rent might seem like an obvious solution, since it means higher property revenue, which leads to a larger loan. But when does affordable housing stop being affordable?

For a building to qualify for tax credits, the apartments must be affordable to families earning no more than 60 percent of the area median income (AMI). Additionally, many rent subsidies are targeted to extremely low-income families, or those earning less than 30 percent of AMI.

The current standard is that a family should pay no more than 30 percent of its household income on rent. Anything more is no longer affordable.

Use the toggles below to see the effects of raising rent. You can choose to raise rent by either targeting higher-income (but still low-income) renters, asking renters to pay a larger portion of their income toward rent, or both.

Subsidies are essential to closing the gap.

Changes to land use, to regulations, or in what and how we build all will help close the gap, but we won’t get where we need to be without subsidies.

Subsidies come in different forms. Some, like vouchers or rental assistance, help pay the rent, leaving tenants enough income to pay for other needs and making the property operate sustainably. Others, like tax credits, HOME funds, Community Development Block Grants, and housing trust funds help pay the costs of construction, development, or major repairs. No one subsidy can solve the affordable housing problem. Rather, a combination of programs including federal tax credits, state housing trust funds, local zoning decisions, and public land contributions can help affordable housing get built. To close the gap for affordable housing, especially for the lowest-income households, there almost always has to be assistance for both development and rental income over time.

You can try it for yourselves. You're the developer now, with full control over your costs and rents. See if you can manipulate the sources and uses to close the gap, bearing in mind everything we've learned about affordable rent, loan sizing, building sizes, and fixed costs.

The inputs below default to realistic values based on a typical housing market. Use the controls to increase or decrease the value for both the 50 and 100 apartment example by a given percent.