Car use will grow as public confidence in buses and trains hits a low, says RAC

A majority of drivers still expect to drive to offices or other places of work in the future, says RAC Report on Motoring 2020 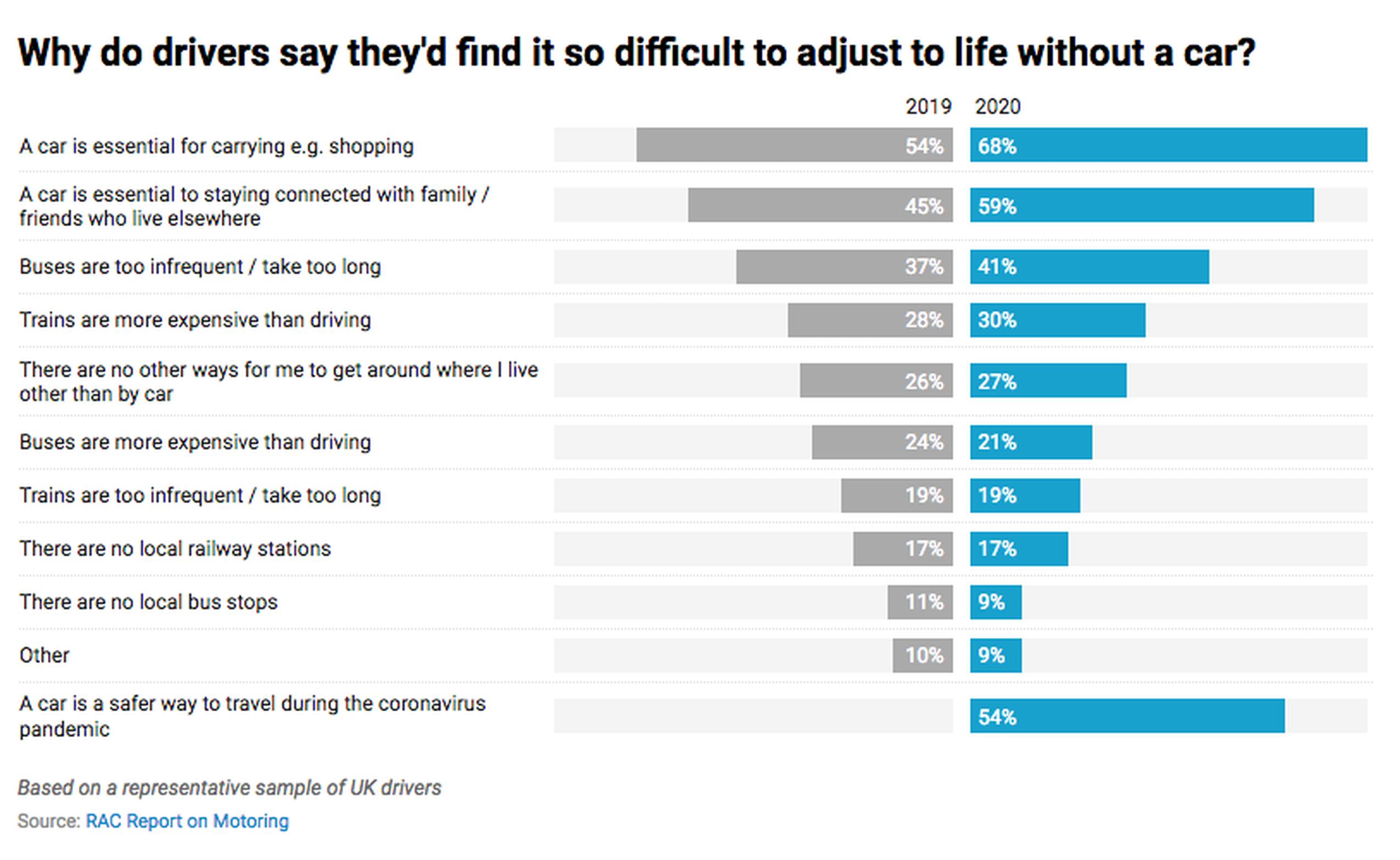 More than half (57%) of drivers say having access to a car is more important than it was before the coronavirus pandemic, according to the RAC. Two-thirds of young drivers, those with fewer than 10 years’ driving experience and drivers living in London, are all significantly more likely to say they need a car more now than they did before March. Research for the RAC’s annual Report on Motoring also found that, for the first time since 2002, fewer than half of drivers (43%) say they would use their cars less, even if public transport was improved.

When it comes to needing to use a car for work, a majority of drivers (64%) still expect to drive to offices or other places of work in the future, a figure which is almost unchanged on the 67% who said they did so before the pandemic. A little over a third of drivers (36%) said they expect to work from home more frequently in the future as a result of the coronavirus.

Despite the rise in home deliveries, nearly seven-in-10 drivers (68%) say a car is essential for carrying items like shopping, up from 54% last year – perhaps partly driven by the rise in click & collect services and people carrying out fewer, larger grocery shops than before the lockdown. Meanwhile, six-in-10 drivers (59%) say the car is essential for meeting up with friends and family who live elsewhere in the country, significantly up from 45% in 2019.

Convincing drivers to leave their car keys at home in favour of public transport is becoming an increasingly difficult challenge. Just last year 57% of motorists said they would use their cars less – a figure that has fallen to 43% in 2020.

Socially-distanced travel is a priority for drivers in the UK and could lead to problems for plans of a greener transport network.

RAC data insight spokesperson Rod Dennis said: “Now, for the first time since 2002, we have fewer drivers than ever saying they’re prepared to use public transport even if services improved – underlining just what a huge role the car continues to play in 2020.

“Without a concerted effort from government and local councils, the pandemic risks putting efforts to encourage drivers out of their cars for some trips back by years. Even before the coronavirus, drivers complained that public transport fares were often too high and services didn’t run when they needed them to. Now, for the first time since 2002, we have fewer drivers than ever saying they’re prepared to use public transport even if services improved – underlining just what a huge role the car continues to play in 2020.

“As cities seek to improve air quality and make urban centres cleaner places, it’s clear that low-cost, efficient alternatives to the car need further thinking and much greater financial investment. Park & ride sites make a lot of sense and cater for the many people who are too far from regular public transport networks, but perhaps now is the time for the concept to evolve to encompass park & cycle, park & walk, or even park & scoot.

“A failure to invest in adequate alternatives for drivers keen on accessing town and city centres risks stifling the recovery of these areas as shopping and tourist destinations as we eventually come out of the coronavirus pandemic.”

The RAC Report on Motoring is an in-depth view of driver opinion and behaviour and has been running every year since 1989. It is conducted among a sample of the driving public who are representative of UK motorists. The 2020 survey was completed by 3,068 drivers.