Walking and cycling get priority between Shoreditch and London Bridge 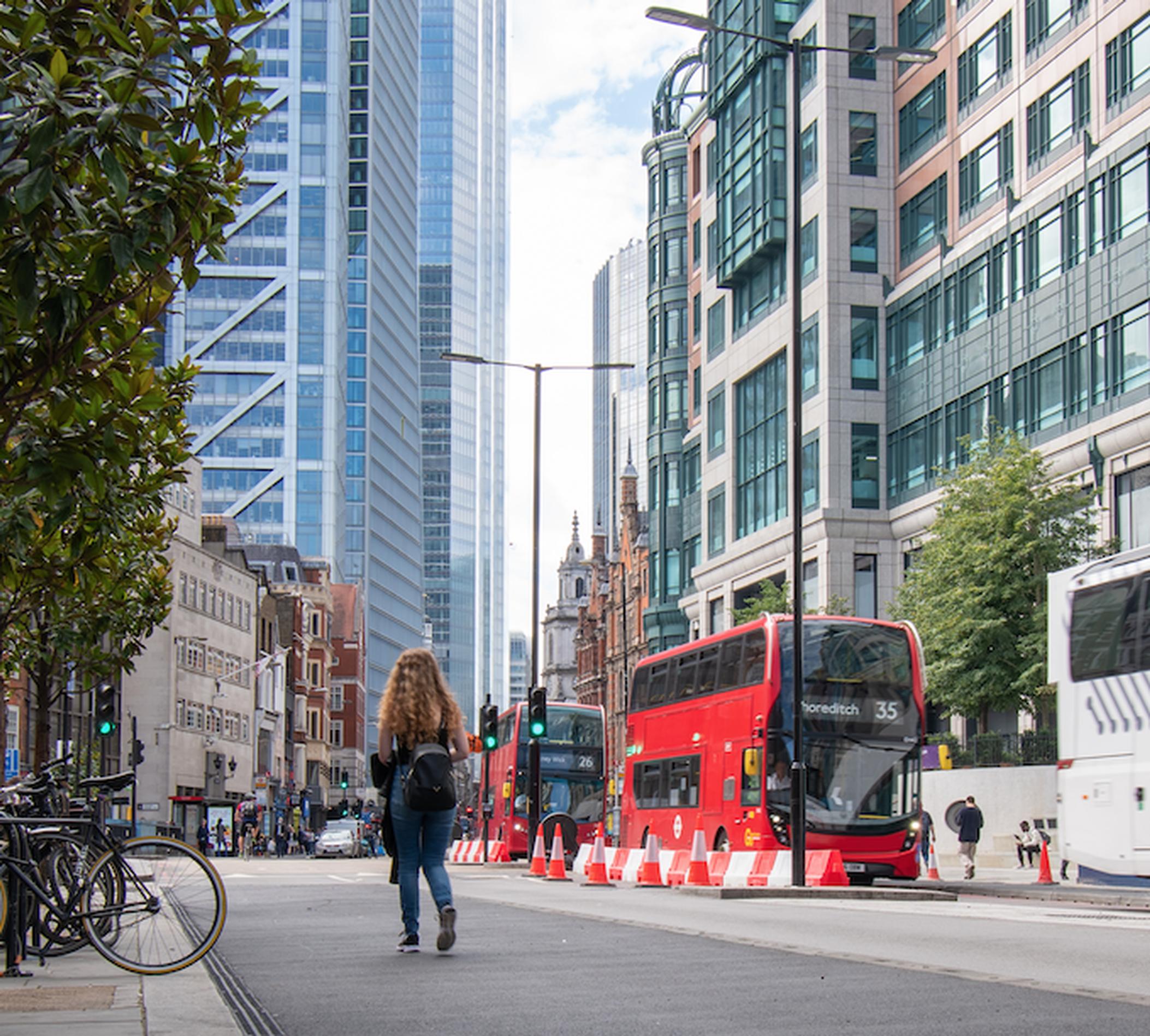 One of central London’s major thoroughfares has been transformed into a place that prioritises people walking and cycling. New traffic restrictions between Shoreditch and London Bridge are part of Transport for London's response to the coronavirus pandemic, which is helping to create more space for walking, improve cycling conditions and enable people to maintain social distancing, particularly at busy times.

TFL said the new measures are designed to reduce the level of motor traffic on the road, reducing the risk of a car-based recovery from coronavirus, while still ensuring it is an accessible area.

The temporary restrictions on Bishopsgate and Gracechurch Street in the City of London - which came into operation on 31 August at 07:00 - are a key part of the Mayor of London and TfL’s world-leading Streetspace plans. The restrictions will be in operation on weekdays between 07:00 and 19:00, making it safer and easier for people to access central London by bike.

Wider footways have been constructed along the corridor to give people on foot more space and a number of banned turns, which will be in operation 24 hours a day, will also be introduced along the road.

Access for vehicles
The temporary measures will continue to provide access for servicing and taxis for most of the busy corridor, except for two short sections of road – Middlesex Street to Liverpool Street, and Leadenhall Street to Fenchurch Street – where access to vehicles is restricted between 07.00 – 19.00. Access to buildings on these streets will be from either end of these sections, with direct access remaining at all other times.

All motor vehicles, including taxis, will be able to access the Bishopsgate walking, cycling and bus corridor using side streets. Kerbside access requirements are considered as part of every scheme when laying out temporary infrastructure. TfL said it recognises that taxis will need to drop off and pick up passengers. Where direct kerbside access has been reduced, TfL is working to ensure that taxi access is provided as close by as possible.

Planning work on further low-traffic corridors in central London continues, including between Old Street and Holborn, with further details to be set out in the autumn.

Alastair Moss, Chair of the City of London Corporation Planning and Transportation Committee, said: “The transformation of Bishopsgate to give priority to pedestrians, cyclists and those travelling by bus during the coronavirus pandemic perfectly complements the City of London Corporation’s efforts to increase the safety for all workers, residents and visitors on City streets. The City Corporation is dedicated to a sustainable transport recovery plan that does not rely on the increased use of cars that would lead to increased congestion, air pollution and road danger.

“To accommodate for the growing number of people returning to work or visiting the City, we have been maximising the space available for safe and socially distanced travel including the temporary closure or timed closure of streets, the reallocation of carriageway and introduction of additional cycle parking bays.”

Andrew Reynolds, Chair of the EC Partnership, representing businesses in the area around Bishopsgate, said: “This is welcome news as this important scheme will provide more space for pedestrians and cyclists helping them to move more easily around the city and feel safe. Instilling confidence and providing reassurance is vital to encourage workers and visitors to return to central London, which is what we need to see our great city regain its vibrancy and energy.”

School children return
Children will start to return school from 1 September and as more people return to their workplaces and visit cultural and leisure destinations in central London. Pre-pandemic around 250,000 school children used London’s buses daily to travel to and from school. The new measures will play an important part in supporting the demand on the transport network by providing more space for people to walk and cycle, minimising bus journey times and avoid overcrowding in order to maintain social distancing.

Alexandra Batey, TfL’s Director of Investment Delivery Planning, said: “As people return to school, work and leisure across London, it’s absolutely vital that streets are able to cope with increased demand for walking and cycling if we are to avoid a car-led recovery from coronavirus. We're running near normal levels of public transport services and are working hard to deliver extra space for walking and cycling right across the capital. The opening of the first walking and cycling priority corridor along Bishopsgate in central London today is a significant step forward for our Streetspace programme and will make a real difference to people moving around this busy corridor between Shoreditch and London Bridge.”

Streetspace expansion
Since May, Streetspace has led to more than 50km of new or upgraded cycle infrastructure being built or currently under construction, along with more than 16,500 square metres of extra pavement space on the TfL network alone. TfL has also installed a total of 1,540 extra cycle parking spaces across London, focused around busy areas like high streets and transport hubs.

Work has also completed on a major 3.7km temporary upgrade to an older cycle route, CS7, in south-west London. Work in Balham and Tooting has added new sections of protected cycle lane to the existing route, which is one of London's busiest, making it much safer and more attractive to people wanting to cycle in the area and to central London and beyond.

The route follows a busy section of the Northern line in southwest London and will help relieve pressure on public transport for people travelling between the area, central London and beyond.

Sadiq Khan, the Mayor of London, said: “With increasing numbers of people returning to central London, it’s more important than ever that we do all we can to avoid a damaging car-based recovery which would damage Londoners’ health and the economy. By creating more space to walk and cycle, our world-leading Streetspace for London plans are helping support a sustainable recovery for our city.”

To complement the latest wave of temporary walking and cycling infrastructure introduced as part of the Streetspace plan, TfL has launched an advertising campaign promoting the physical and mental health benefits of active travel. The ‘Now is the Time’ campaign, which includes posters and a TV advert, aims to inspire Londoners to enjoy the benefits of walking and cycling whether on their journey to work, school or the local shops.

New and upgraded cycle lanes are being delivered across London as part of TfL’s Streetspace plans to respond to the current public health emergency and support the safe restart of London’s economy by introducing temporary walking and cycling measures across London.

TfL and Greenwich Council recently announced that work to transform roads for cycling between Greenwich and Woolwich has been fast-tracked to start next month, with plans including a complete overhaul of the dangerous Angerstein roundabout.

TfL and Lewisham Council have set out a series of measures to improve conditions for people cycling and using public transport between Lewisham and Catford, by making changes to entry to and exit from Lewisham High Street and extending bus lane operation to 24/7.

TfL has joined with the walking and cycling charity Sustrans to introduce the Space to Move Map, which highlights the changes being made across London. The map makes it possible for Londoners to see where TfL and London boroughs are making it easier to walk and cycle safely and provides an opportunity for feedback. Using the map, people can search their area for new walking and cycling infrastructure and share their views with TfL directly.

Sustrans London director James Austin said: “Nearly half of London households don’t have access to a car and with social distancing in place, there have to be safe, attractive alternatives to public transport. COVID is disproportionately affecting poorer areas. Boroughs should be creating streets across London that are attractive and feel safe to walk, wheel or cycle on. There is still opportunity to do better on this.”