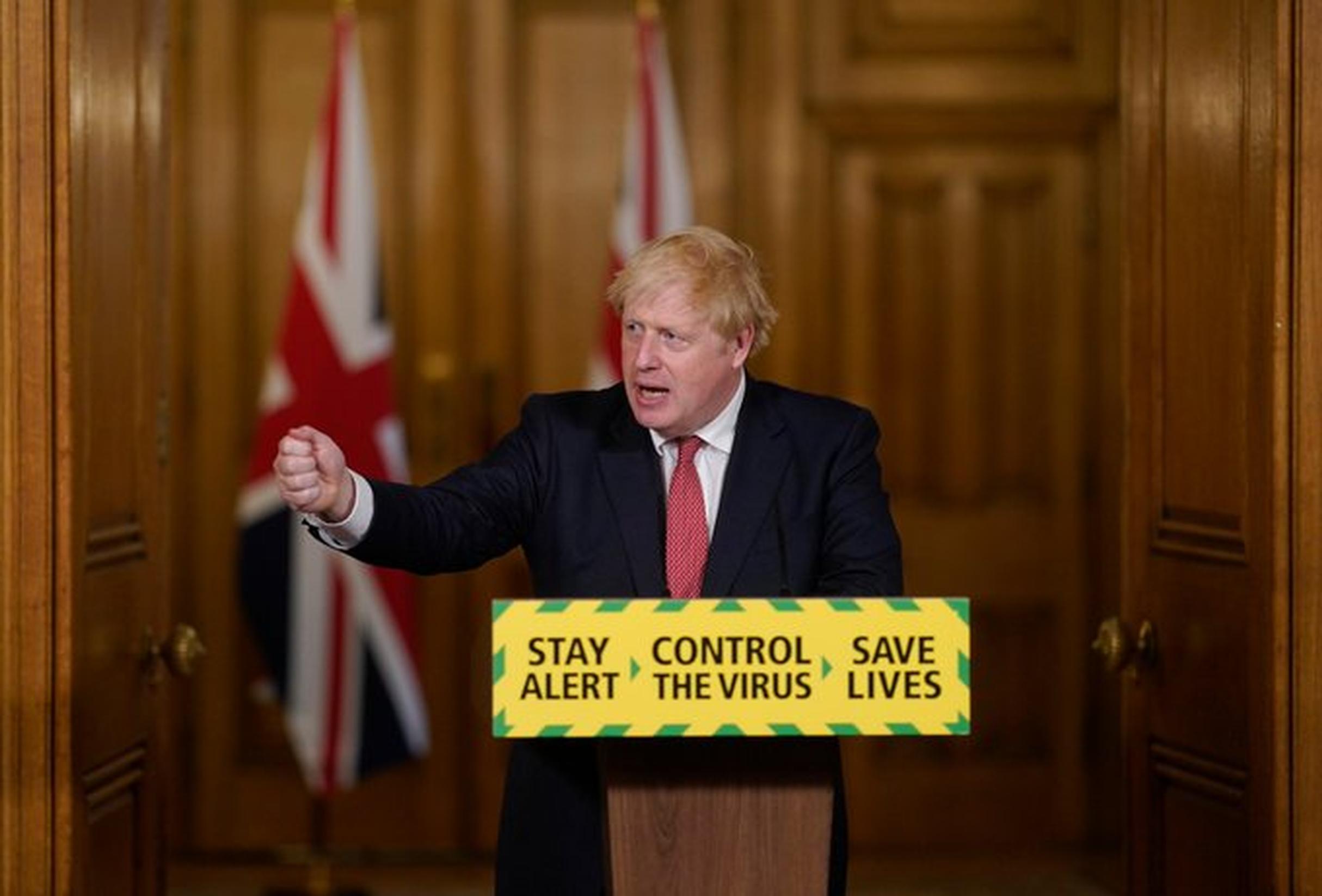 Prime Minister Boris Johnson is encouraging people in England to return to their workplaces, where it is safe to do so, from 1 August.

Alongside offices, the PM said from 1 August most remaining leisure venues and close-contact services such as beauticians could reopen, as can indoor performances in socially-distanced audiences in theatres, music and performance venues. From October sports fans will be able to return to stadiums, depending on the outcome of pilot schemes.

The Prime Minister said that he hoped that life in Britain could return to something resembling normality by Christmas.

However, Johnson stressed that the planned easings were conditional on the virus being contained, which required the public to behave sensibly and follow rules. He said: “It is contingent on every one of us staying alert and acting responsibly. It relies on our continued success in controlling the virus. And we will not proceed if doing so risks a second peak that would overwhelm the NHS.”

Under the new guidelines, people can use public transport for journeys immediately, while advice for employers will change from 1 August.

“It is important to give people hope and to give business confidence,” the PM said. “So in England, from today we are making clear that anybody may use public transport, while of course encouraging people to consider alternative means of transport where they are available.”

Johnson said that decisions on whether people should start returning to shared work places was a matter of discussion between employers and employees.

“Instead of government telling people to work from home, we are going to give employers more discretion, and ask them to make decisions about how their staff can work safely. That could mean of course continuing to work from home, which is one way of working safely and which has worked for many employers and employees. Or it could mean making workplaces safe by following ‘COVID-Secure’ guidelines. Whatever employers decide, they should consult closely with their employees, and only ask people to return to their place of work if it is safe.”

Johnson said that during the lockdown the public has learned new ways of working, and embraced virtual platforms such as Zoom. However, the PM said that there was also a need in business for people to meet in person. “But, in the end, human interaction, face to face conversations are important and businesses have told me that,” he said.

The PM's statement came a day after the chief scientific adviser Sir Patrick Vallance told MPs he saw no reason to change the existing advice the work at home (see below).

A timetable for change

The Prime Minister set out a timetable for change in England.

July
•    From 25 July indoor gyms, pools and other sports facilities can reopen

August
•    On 1 August the government will update its advice on going to work, asking employers to make decisions about how and where their staff can work safe
•    From 1 August most remaining leisure settings, including bowling, skating rinks, casinos and all close contact services such as beauticians, will be allowed to reopen
•    Audiences adhering to social distancing will be able to return to indoor theatres, music and performance venues
•    Wedding receptions for up to 30 people will be allowed
•    However, soft play areas and nightclubs will remain closed beyond that date, although they will be kept under review.

September
•    From September, schools, nurseries and colleges will be open for all children and young people on a full-time basis, while universities are also working to reopen as fully as possible

October
•    In October, the government intends to allow audiences to return to stadiums, while conferences and other business events can recommence, subject to the outcome of pilots.

The Prime Minister hopes that the timetable will enable people to return to a near normal life by the year’s end. “Throughout this period, we will look to allow more close contact between friends and family when we can,” he said. “It is my strong and sincere hope that we will be able to review the outstanding restrictions and allow a more significant return to normality from November at the earliest – possibly in time for Christmas.”

The Prime Minister said the new easing was based on the progress being made in containing COVID-19, with new daily cases below 1,000 and the virus’s reproduction rate ‘R’ number nationally between 0.7 and 0.9.

An increase in virus testing and tracing capability also made the lifting of restrictions possible, he argued.

“National lockdown was undoubtedly the right thing to do and has saved many thousands of lives,” said Johnson. “Now however, we know more about the virus – we understand the epidemiology better and our intelligence on where it is spreading is vastly improved. That means we can control it through targeted, local action instead. In England, this work is led by NHS Test and Trace and within it the Joint Biosecurity Centre.”

The PM pointed to the way in which the government has been willing and able to tackle flare-ups of the virus at specific premises in Weston-super-Mare and Kirklees. It has also implemented a local lockdown on Leicester after a spike in infection rates was detected, while worries about infection rates in Bradford and Blackburn with Darwen has the government work with relevant local authorities to increase testing and take targeted action.

Johnson unveiled new powers for local authorities to manage outbreaks of the virus in their areas. From 18 July local authorities would have the power to close premises, close off public outdoors spaces and cancel events.

“These powers will enable local authorities to act more quickly in response to outbreaks, where speed is paramount,” the PM said. “Action by local councils will not always be sufficient. So next week we will publish draft regulations which clearly set out how central government can intervene more effectively at a local level. Where justified by the evidence, ministers will be able to close whole sectors or types of premises in an area, introduce local ‘stay at home’ orders, prevent people entering or leaving defined areas, reduce the maximum size of gatherings beyond national rules, or restrict transport systems serving local areas.”

The COVID-19 Containment Framework can be found by clicking here

Johnson said he recognised that it will be hard going for people affected by these local measures. “It isn’t easy, and for some it may seem unjust that people just a short distance away can live their lives closer to normal,” he said. “But it has to be right that we take local action in response to local outbreaks – there is no point shutting down a city in one part of the country to contain an outbreak in another part of the country.”

Plan for the worst, hope for the best

An expansion in testing capacity to a target of 500,000 tests a day by the end of October would help identify positive coronavirus cases among people with symptoms of seasonal illnesses.

Johnson confirmed an additional £3bn in funding for the NHS to help it prepare for a potential second wave of infections and to cope with its usual winter pressures.

“Demand for testing is not the only challenge that winter will bring. It is possible that the virus will be more virulent in the winter months, and it is certain that the NHS will face the usual, annual winter pressures. We have taken a number of steps therefore to get the NHS ready for winter,” he said.

The government is planning a large-scale flu vaccination programme, increased the number of ventilators available to patients across the UK – up from 9,000 before the pandemic to nearly 30,000 – and increased the pipeline of personal protective equipment (PPE) for the NHS and social care sectors.

“I can confirm that we are providing an additional £3bn of funding to the NHS in England to get ready for winter,” he said. “Scotland, Wales and Northern Ireland will also receive additional funds. This will allow the NHS to continue to use the extra hospital capacity acquired from the independent sector and also to maintain the Nightingale hospitals until the end of March. So we are making sure we are ready for winter, and planning for the worst. But even as we plan for the worst, I strongly believe we should also hope for the best.””

The expert says… No reason to change work at home advice

The Prime Minister delivered his optimistic vision of offices, sports venues and theatres reopening over the coming months a day after his chief scientific adviser said there was no case for people stop working at home.

On Thursday 16 May, the UK's chief scientific adviser Sir Patrick Vallance said there was no reason to change the guidance on working from home.

Since late March the government has advised people to work from home if possible to help curb coronavirus. But last week Prime Minister Boris Johnson signalled a change, saying: "I think we should now say, well, ‘Go back to work if you can.’"

Speaking to the House of Commons Science and Technology Committee wearing a mask, Sir Patrick said it was his view that distancing measures were still important for containing the virus. He said this view was shared by the Scientific Advisory Group for Emergencies (SAGE).

“Of the various distancing measures, working from home for many companies remains a perfectly good option because it's easy to do," he said. “I think a number of companies think it's actually not detrimental to productivity. And in that situation, there's absolutely no reason I can see to change it.”

In mid-March, Sir Patrick said it would be a "good outcome" for the UK if the number of deaths from the virus could be kept below 20,000. The latest figures show over 45,000 people have died after testing positive for coronavirus in the UK.

When MPs asked Sir Patrick about Britain's response to the virus, he admitted: "It's clear that the outcome has not been good in the UK, I think you can be absolutely clear about that. There are many factors that are going to play in this as we look and say, ‘what is it that makes some countries having done worse than others?’, and there will be decisions made that will turn out not to have been the right decisions at the time."