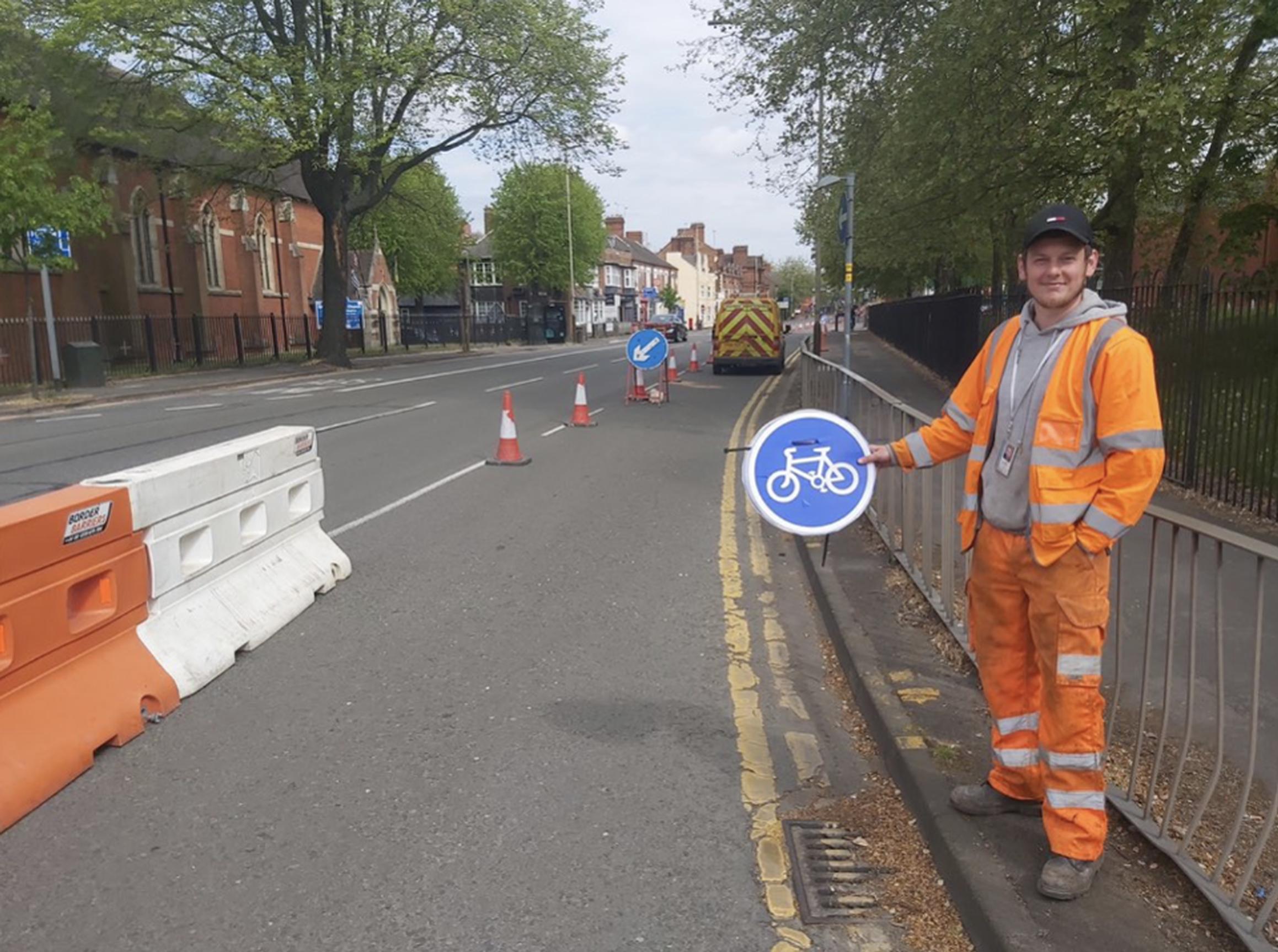 Leicester City Council has created a new cycle route to help key workers who are biking to work during the coronavirus lockdown.

With traffic in the city having fallen to a fraction of its usual levels, highways bosses at Leicester City Council have created a temporary cycle route by coning off one lane of Aylestone Road between its junction with Almond Road and its junction with Welford Road, outside the Leicester Tigers rugby ground.

The work has simply involved putting cones out to mark off one lane of the carriageway to create a safer route, especially for key workers travelling to and from Leicester Royal Infirmary (LRI).

The temporary cycle route will help link up existing cycling tracks around Freemans Common with the cycle route on Welford Road, and creates a direct route for cyclists living along Saffron Lane in Aylestone to LRI.

Using part of Aylestone Road as a temporary cycle track has been possible due to the huge drop in traffic across the city since the lockdown came into effect on March.

There are plans for a more permanent cycle route as part of the landscaping works linked to a new hotel and car parking scheme being carried out by Leicester Tigers at the former Granby Halls site.

The city council is also looking at potential options to extend the link, for example on Saffron Lane, where similar cycle lanes can be easily introduced over the coming weeks to help in the current situation.

Leicester deputy city mayor for the environment and transportation, Cllr Adam Clarke, said “Similar schemes have been introduced elsewhere in Europe. Authorities in Germany have temporarily enlarged city cycling and walking routes to allow riders and walkers to observe social distancing more easily while the streets are relatively free of other traffic. Cyclists and pedestrians in Brighton are now also able to use the seafront at Madeira Drive daily from 8am to 8pm.”

Some routes in Leicester have seen an increase in cycling since the coronavirus lockdown, with some people choosing to avoid public transport. Cllr Clark said: “The city council is keen to build on its Connecting Leicester scheme to construct a network of cycleways, to enable those who have used the temporary lanes to continue cycling or walking once the lockdown ends.”

In addition to the temporary lanes, timings at traffic lights have also been altered to give even greater priority to pedestrians and cyclists to cross normally busy roads. More information on cycling and walking routes is also being added to the Choose How You Move website helps people get around the city. Details are available at www.choosehowyoumove.co.uk

Earlier this month the city council also announced Leicester Bike Aid – a new free bike hire scheme for key workers – working in partnership with local cycle shops and organisations to provide quality bikes to people needing them to travel to and from essential jobs.

So far around 120 applications have been received mostly from health and care workers, and over 60 cycles have been made ready for use. More than 60 further cycles have been fixed for free thanks to the support of local bike shops, to be provided to those people still waiting. Leicester City Council’s cargo bike fleet is also being used to support food and other essential deliveries in the city.

The Leicester Bike Aid scheme is funded by the city council and supported by donations from local bikes shops, businesses, Sustrans, British Cycling and individuals. In addition to providing bikes on indefinite loan, the scheme provides essentials such as locks, lights and bike servicing.

The bikes are cleaned and sanitised before being handed over, and social distancing is observed at all times, including during collection.

Cllr Adam Clarke said: “We are seeing more people cycling to get to work in key roles at the moment, including our own social care staff, staff at our hospitals, delivery workers and volunteers. We want to do all we can to enable key workers to get to where we all need them to be.

“Given the huge reduction in traffic on the roads, the opportunity is there for us to create this route connecting the southern part of the city to Leicester Royal Infirmary. It is work that can be done easily and quickly, in line within the Government’s guidelines. We’re actively looking at extending this to other routes and potential connections to other existing or planned cycle routes.

"We’ve had an amazing response to Bike Aid, the free cycle loan and repairs scheme, and anecdotally we are hearing that many of the people taking to bikes are not necessarily experienced cyclists, so providing a safe and protected route like this can only help.”