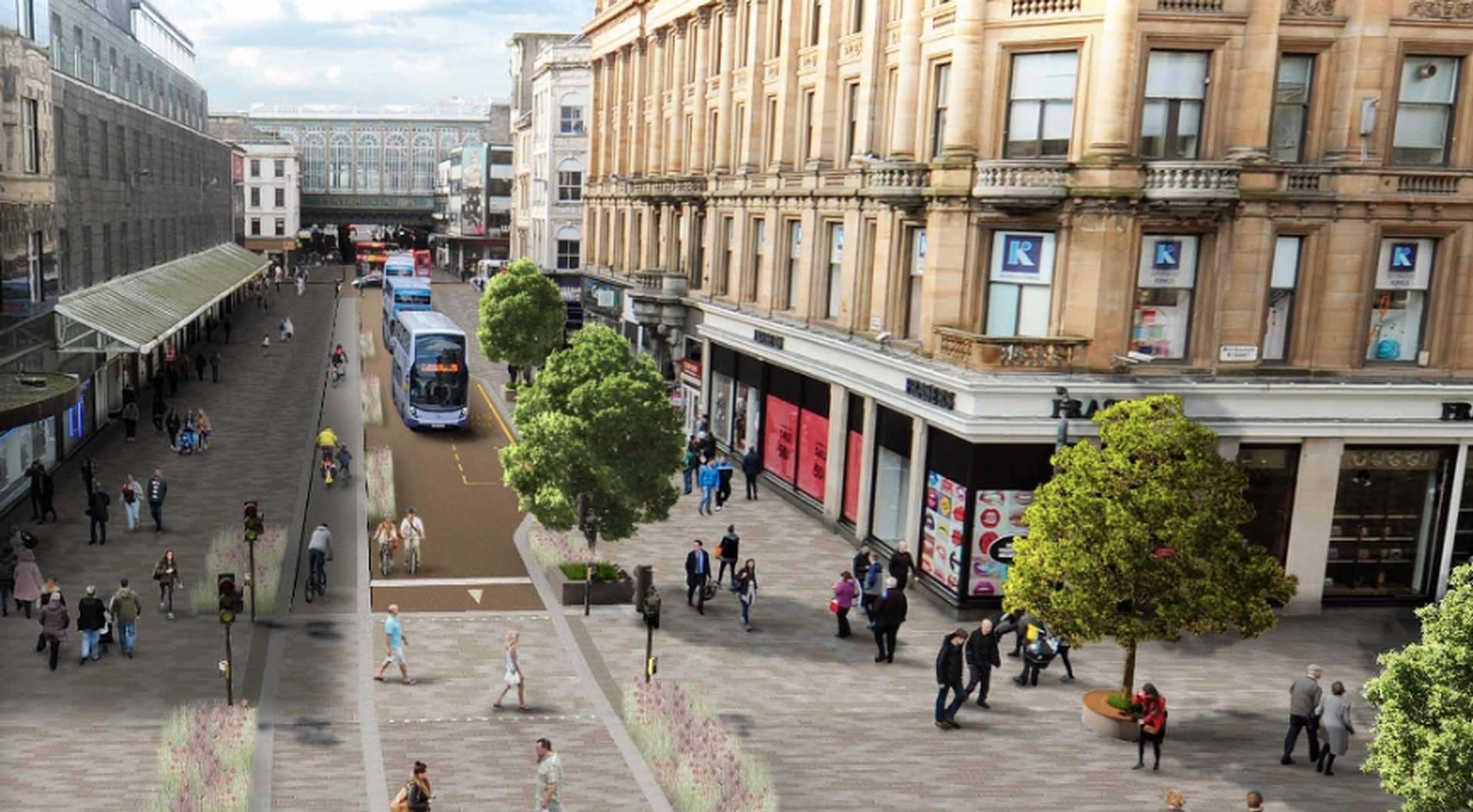 Scotland is 'acting locally as we lead globally on climate change,' said the First Minister Nicola Sturgeon, outlining the fund details. 'On climate change, Scotland is leading globally - but we must support local action too. We are investing over £500 million in new bus priority infrastructure, to make journeys faster, greener and more convenient. We want people to walk and cycle more too - reducing our carbon footprint and improving our health. From Ayr to Aberdeen, a fund of £27 million will support more than 200 schemes to make it easier for people to cycle and to walk.'

Scotland is also the first country to put in place a nationwide ban on pavement parking. In Japan, you are not allowed to buy a car unless you can prove that you have a place to park it off-street. Stuart Hay, director of Living Streets Scotland, says: 'This is the first nationwide ban put in place in the UK and represents the culmination of over a decade of campaigning by Living Streets Scotland and disability charities. People in wheelchairs, parents with pushchairs and older adults who are currently forced into oncoming traffic when faced with vehicles blocking their path will now be able to enjoy a new freedom. It also stands to offer huge savings to cash-strapped councils currently charged with fixing footways damaged by vehicles parking on them.

Parking on pavements should also be banned across England, according to MP and Living Streets. The Commons' Transport Committee has called for a new law and an awareness campaign on the impact it has, especially for those with mobility or visual impairments. The Department for Transport said it had concluded a review into the issue and would be announcing its next steps 'over the coming months'. But the committee said government action had 'been slow'. Its chair, Labour MP Lilian Greenwood, said: 'A couple of years ago a young wheelchair user came to one of my coffee mornings... asking me to do something about pavement parking because it stopped him getting round his own neighbourhood.'

The Places for Everyone programme

Details of the Programme’s major projects were announced in Perth in July. By improving walking, cycling and wheeling links in communities across the country, and making it safer and easier for people to choose more active and sustainable ways of travelling for shorter journeys, the projects will also be supporting Government’s priorities to reduce carbon emissions from transport.

John Lauder, Sustrans deputy CEO, said: 'It is essential that politicians highlight the importance of changing the way people travel when tackling climate change. So we are delighted at Nicola Sturgeon highlighting walking and cycling as a measure to tackle climate change and improve health.

'Such a reference is a clear indication of the high priority being given to active travel in Scotland. Much of this step change is as a result of society becoming more aware of the effects of carbon emissions, but it’s also linked to people wanting to live a healthier lifestyle and become more active.

'Places for Everyone is focused around empowering communities to help make this step-change easier by ensuring we have the right provisions and infrastructure in place in place for all ages and all abilities. We’re extremely excited and encouraged by the projects chosen to receive funding this year and we look forward to working with our partners to deliver these goals by helping more people to walk, cycle and wheel.'

Details of the first of the Places for Everyone funded projects are as follows.

Accessible Ayr aims to transform the accessibility of Ayr town centre for people on bike and foot as well as those with reduced mobility, through regenerating High Street Sandgate and River Street. By significantly improving the public space and creating a safe route to cycle through the town centre, the project aims to link the centre to neighbourhoods in the north of the town as well as the beach and the education campus to the east. The project has provided an important catalyst to bring together stakeholder groups with an interest in active travel and accessibility in Ayr and aims to integrate and expand existing and new behavioural change initiatives to complement the material elements of the project.

A community led project to build an accessible, traffic free walking and cycling route linking the villages of Killearn, Balfron and Boquhan in southwest Stirlingshire. The Places for Everyone funding will give the community group the opportunity to carry out design and feasibility studies for the route.

This ‘green infrastructure’ project will use the recent creation of a flood management and wetland area as an opportunity to provide for, and prioritise walking and cycling in the Maidencraig area of Aberdeen. As well as upgrading existing paths, the project aims to create new routes linking Skene Road, Bressay Brae, Samphrey Rd and Maidencraig Way helping to create safer, more accessible and attractive walking and cycling links. The paths will also help link to Lang Stracht Road and Skene Road as well as local schools, community areas, Woodend General Hospital and the Den of Maidencraig Local Nature Reserve as well as to the site as a green space itself.

Places for Everyone is funding the design of key walking and cycling routes which identified in the East Lothian Active Travel Improvement Plan and other reports, more specifically those routes in and around the Musselburgh area that link to works happening in Edinburgh City and Midlothian. The project will initially focus on three routes that will help everybody to actively travel through and around Musselburgh, making shopping, getting to work or school and other everyday journeys easier, safer and quicker.

PFE is funding the design of the North City Way (NCW) - a continuous traffic free, segregated cycle route, which aims to link Bishopbriggs in East Dunbartonshire and Milton in Glasgow to the City Centre. The route would go through the Sighthill, Cowliars and Port Dundas communities, create a new walking and cycling bridge across the M8 and end at the proposed North Hanover Street Avenue. The funding will also support engagement and consultation with local communities, which will help to shape the look, feel and direction of the final route, whilst also encourage long term behaviour change. Once completed, it is hoped the route will make it safer and easier for people on bikes travelling from the north of Glasgow to get to the city centre.

Sustrans Scotland works closely with communities, the Scottish Government and other partners to ensure that the people of Scotland have access to safe walking and cycling routes. The organisation provides advice, support and funding for the creation of infrastructure that makes it easier for people to walk and cycle for everyday journeys.

Walking and cycling charity Sustrans Scotland launched the Places for Everyone fund in March 2019. The fund is a combination of what was previously known as the Community Links, Community Links PLUS and Safer Routes to Schools funds. Places for Everyone is supported by Transport Scotland to invest in projects that create safer, more attractive streets and places for people to walk, cycle and wheel in.