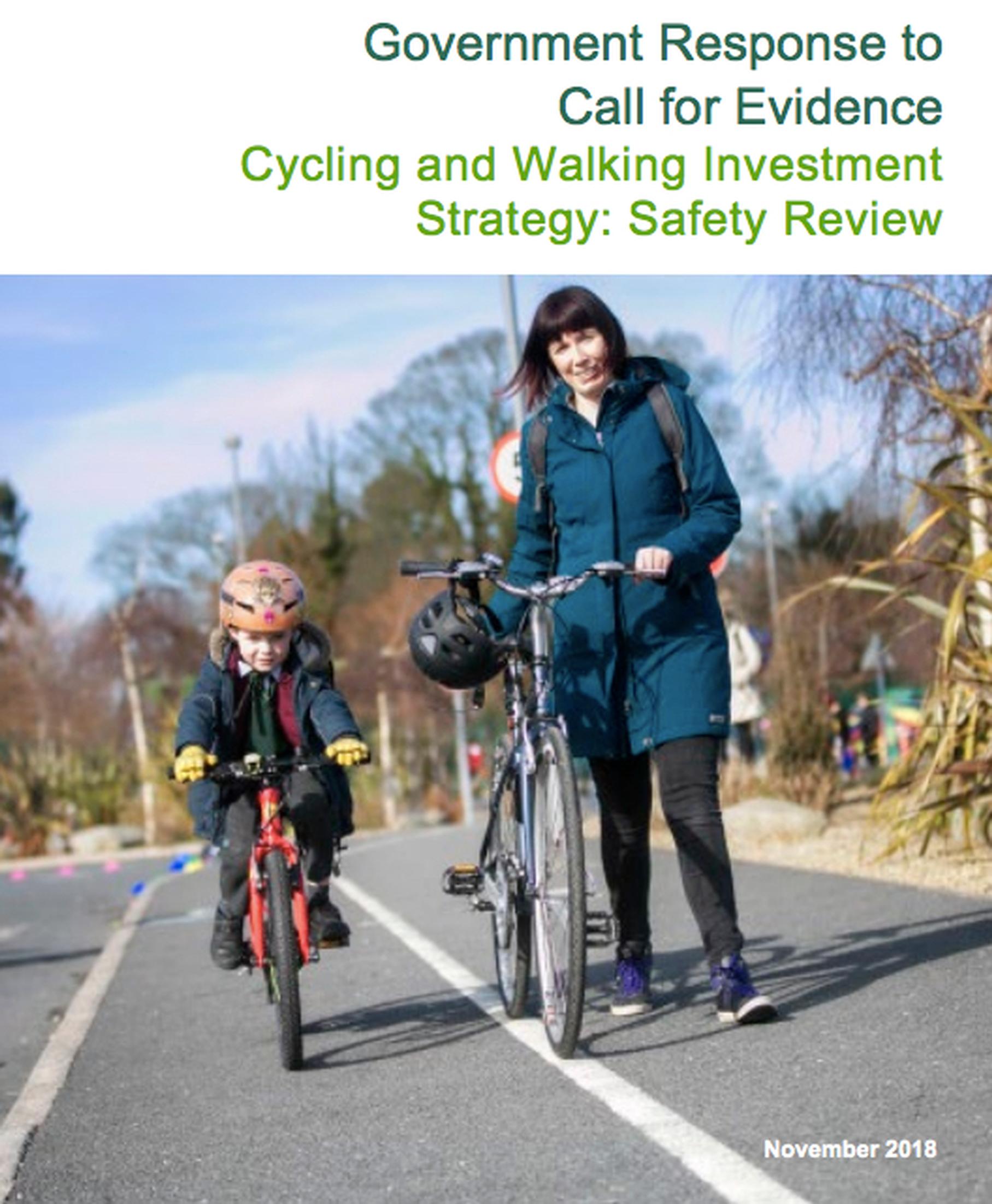 Councils will get new powers allowing the use of CCTV and ANPR cameras to enforce parking restrictions in cycle lanes as part of a government ‘action plan’ to improve road safety for pedestrians and cyclists.

Among a raft of measures to combat dangerous driving, the DfT has pledged £100,000 to the police for the setting up of a back office unit to analyse video evidence submitted by the public. The DfT says the review has been shaped by a consultation on cycling and walking safety earlier this year, which received more than 14,000 responses.

Responses highlighted that the needs of vulnerable road users should be considered first, states the review. This is based on the ‘Hierarchy of Road Users’ principle, which places vulnerable road users at the top; pedestrians, in particular with disabilities, followed by cyclists, public transport and finally other motorised transport.

A common theme in the consultation was ‘close passing’. The review proposes a range of measures to tackle the problem including educational materials which police forces can give to drivers, a cycle training pilot for driving instructors, which would include guidance on safer overtaking.

Also planned is a major revision of the Highway Code to improve safety for cyclists and pedestrians, states the review. The updated version will offer new advice on overtaking, passing distances and giving cyclists and pedestrian priority at junctions. It will also include guidance on the ‘Dutch Reach’, a method of opening a car door with the hand furthest from the handle, to force drivers to check over their shoulders for approaching traffic.

Councils should increase local transport infrastructure funding on walking and cycling from the current average of 12% up to 15%, states the review.

“We will continue to make funding available through a range of existing streams to maximise the ability of local councils to secure capital funding for infrastructure projects that improve safety, such as segregated cycle facilities,” says the review. “The government has now identified an additional £700m available to local bodies to support cycling and walking across the Spending Review period up to 2020/21 from a range of sources.”

The review also calls for cycling and walking infrastructure to be properly considered in the early stages of planning for new developments. Cycling and walking should be included in “both policy stages and at pre-planning application stages” of site design, it states.

Government funding for cycle training will continue until March 2020, states the review. In 2019, the DfT will run a “Bikeability Summit” to promote the benefits of cycle training to businesses and employees and will also develop a “toolkit guide” for new cyclists, which will include the relevant sections of the Highway Code.

To help raise the profile of active travel, the government will appoint a cycling and walking champion. A DfT spokeswoman told LTT that further details about the new role would be announced in Spring 2019. She said the role could include a range of responsibilities, “depending on the skills and experience of the individual appointed”, such as: promoting cycling and walking through their public profile; liaising with Local Enterprise Partnerships to promote investment in cycling and walking and promote prioritised Local Cycling and Walking Infrastructure Plans (LCWIPs); ensuring schemes actively consider measures to support cycling and walking at both the strategic and delivery level; supporting local authorities to embed good practice.

Xavier Brice, chief executive of the charity Sustrans, welcomed the action plan, describing it as the “first of its kind and a big step forward in making our roads and streets safer”. He told LTT: “It’s comprehensive, based on a wide-ranging call for evidence and comprises a wide range of actions to make walking and cycling safer, from infrastructure guidance to funding and political support to prosecute dangerous car driving. The success of this action plan, as with any planning, will depend on its delivery on the ground and we look forward to working with the Minister Jesse Norman, DfT and other organisations to progress it.”

Brice said the proposed changes to the Highway Code are an “important milestone in road safety, with over 400 pedestrians killed in car collisions in the UK each year”. He added: “This is something Sustrans has been advocating. The changes aim to make our streets safer and more attractive for a range of people, including children, pedestrians, people who cycle and wheelchair users, while help create and cultivate greater mutual respect between different users.”

But he expressed disappointment that the review did not address the issue of speed reduction “more boldly”. He commented: “Our recent review of the National Cycle Network highlights the need to create safer spaces for people to walk and cycle, by reducing speed limits and creating more paths away from cars. Reducing the speed limit to 40mph on minor rural roads and 20mph in built up areas can play a huge role in making active travel a more welcoming prospect for everyone.

Paul Tuohy, chief executive of the charity Cycling UK, told LTT: “We were disappointed by the lack of movement on lowering speed limits, given their importance for improving the safety of pedestrians and cyclists. But the biggest ‘must do better’ issue is funding. The Treasury has now committed £25.3bn over the next five-year spending round to enhancements and maintenance of England’s trunk roads and motorways – effectively an annual £109.62 per head - and a further £3.5bn for enhancing the ‘Major Road Network’ of local authority ‘A’ roads.

“Meanwhile, the Cycling and Walking Investment Strategy is set to decline to just £17m in 2020/21 – which works out at just 37p per person in England outside London – and then zero thereafter. If local authorities are to plan cycling and walking networks with any confidence – to fulfill the government’s admirable stated ambitions – they will need some serious funding, that is currently still lacking.”

Tuohy welcomed the review’s proposals to clarify the rules on how much space drivers should leave when overtaking cyclists, and how to open a car door safely, using the ‘Dutch Reach’ method.

“What will really matter, though, is whether the government also takes the opportunity to clarify the rules on who has priority at give-way junctions as called for in the British Cycling campaign Turning the Corner, which Cycling UK supported.

“Most European countries adopt the principle that vehicles turning at a junction should give way to a pedestrian or a cyclist going straight ahead across their path. This improves safety and priority for cyclists and pedestrians alike at the places where they are most vulnerable, and would also enable the UK’s traffic engineers to provide quality segregated cycle tracks with much greater confidence of their safety.”

Dr Robert Davis, chair of the Road Danger Reduction Forum, feels the action plan is a missed opportunity. He told LTT: “Despite some fine words about supporting cycling and walking as key modes of transport – albeit with a target date 21 years away – this is a very disappointing document. The crucial new area of third party reporting video and photographic  evidence of illegal driving to the police only gets £100,000 to 'develop a back office function' rather than the payment for trained officers to process this material, which would require more than this amount annually for each police service.”

Davis expressed concern about the lack of funding: “In the context of some £29bn for accommodating more motor traffic on road building, we see that just £17m can go to cycling and walking by 2020/21. That discrepancy is offensive to anybody genuinely interested in supporting active travel.”

He added: “In 2014 the government promised a review, but all we have had is a review of offences by cyclists, implicated in a tiny proportion of casualties. Furthermore, there is no indication that the Minister has informed his Cabinet colleagues that the numbers of traffic police officers need to be at least restored, if not massively increased, if we are to secure a reasonable level of compliance with the laws that we have.”