‘Real-life’ test base for automated cars launched in Greenwich 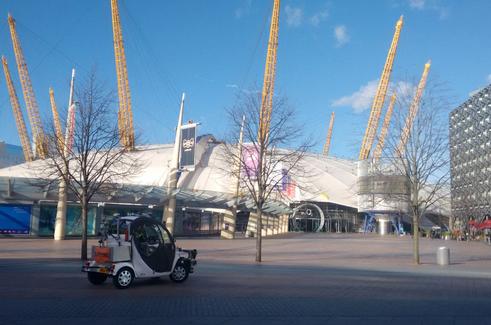 On-street testing of connected and automated vehicles (CAVs) is to be carried out in the coming months in Greenwich by transport consultancy TRL. The new UK Smart Mobility Living Lab represents the first “open innovation environment for CAVs”, according to TRL. This, it says, will allow for services and processes to be “safely developed, evaluated and integrated within the local community”.

The UK Smart Mobility Living Lab will be used by vehicle manufacturers, tech developers, academic institutions and the public sector for research and development, concept testing and validation.

TRL says it will be configuring and testing the operation of CAVs ‘in situ’ across the London borough during the next few months, in preparation for usage trials involving members of the public, which are due to start in July. Jaguar Land Rover vehicles fitted with Bosch equipment are also due to be tested on the roads of Greenwich during May.

TRL says that it chose Greenwich as the CAV testing site because of its diverse range of transport modes including roads, buses, underground, rail, Docklands Light Railway, river bus and the Emirates Airline cable car. “This provides an ideal environment to test the interaction and interoperability of connected and autonomous vehicles in a variety of different environments,” says TRL.

Onsite facilities for the Living Lab will be based at the Digital Greenwich Innovation Centre within the Mitre building, with further off-site at TRL’s R&D headquarters in Berkshire.

According to TRL, there are three clear challenges facing the CAV market: the choice and variety of technologies available to manufacturers; the rate at which the capacity and speed of those technologies are developing; and the automotive industry’s ability to adapt quickly enough to capitalise on the opportunities this presents.

Rob Wallis, CEO of TRL, says: “Many organisations are testing autonomous systems in dedicated off-street facilities, but the success of these vehicles largely depends on how they integrate into real world living environments, alongside existing transport services. By providing a welcoming and real-life regulatory environment for testing, TRL can help accelerate the adoption of new technology and enable the UK to play a pivotal role in the development of this global market over the next five years.”

Transport Minister Andrew Jones adds: “Driverless cars will improve road safety and bring huge benefits to the economy. We have backed projects in Greenwich with £9m of funding that are helping to turn it into a major centre for testing and demonstration.”

Further details of the UK Smart Mobility Living Lab’s plans will be presented at SmarterTravelLIVE!