Pavement parking is beyond a joke

Glenn Lyons asks: Did you hear the one about the motorist and the pedestrian? 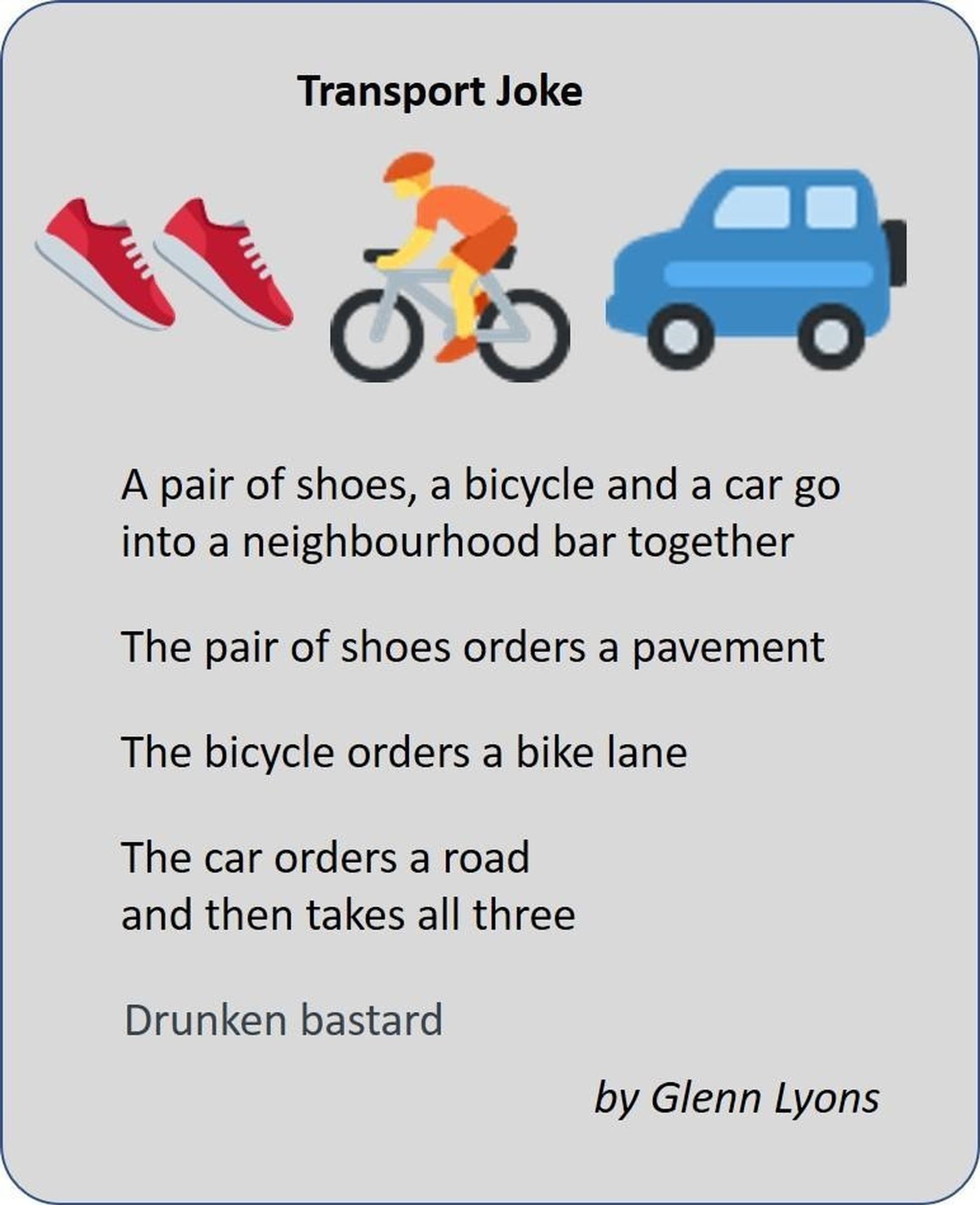 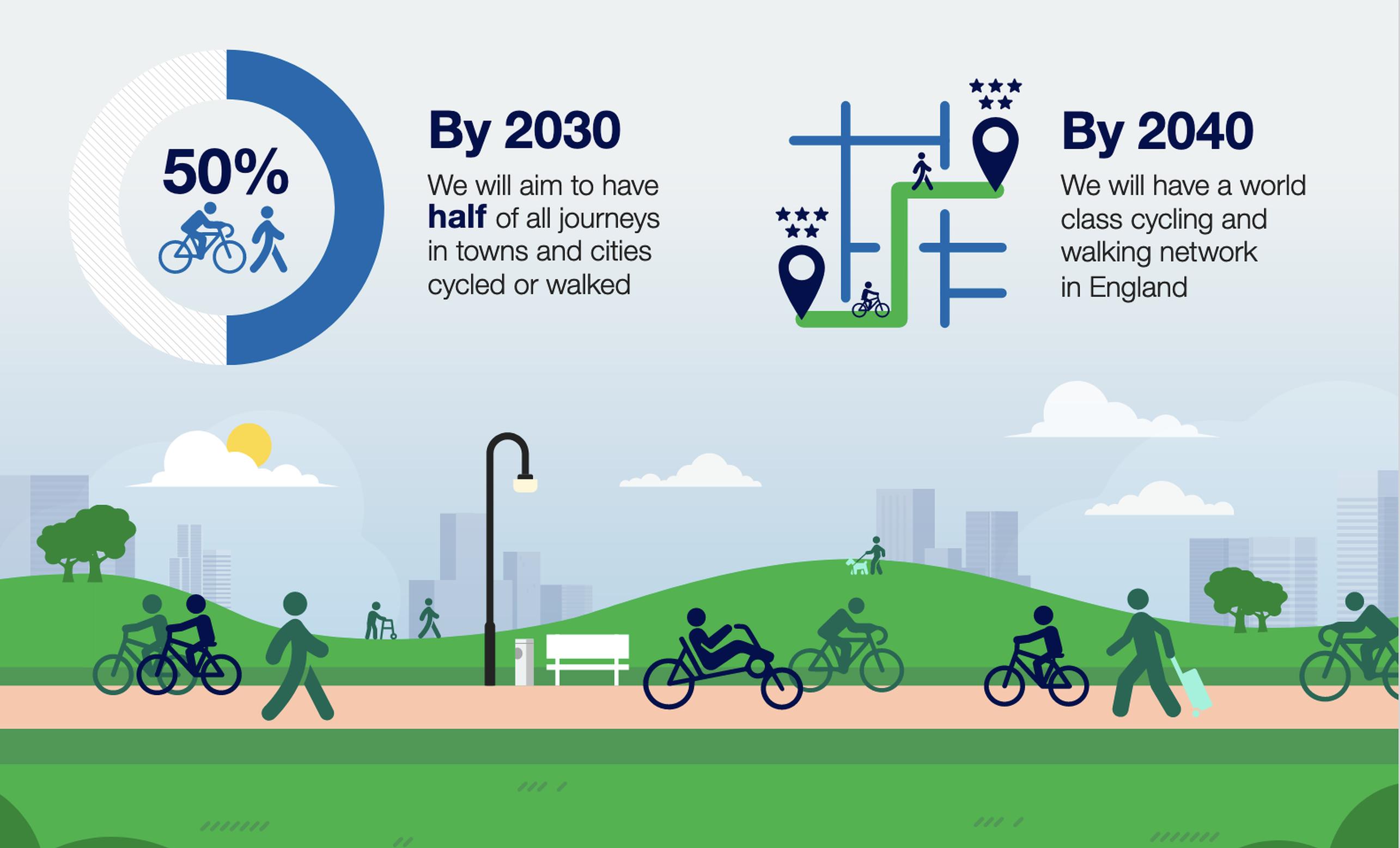 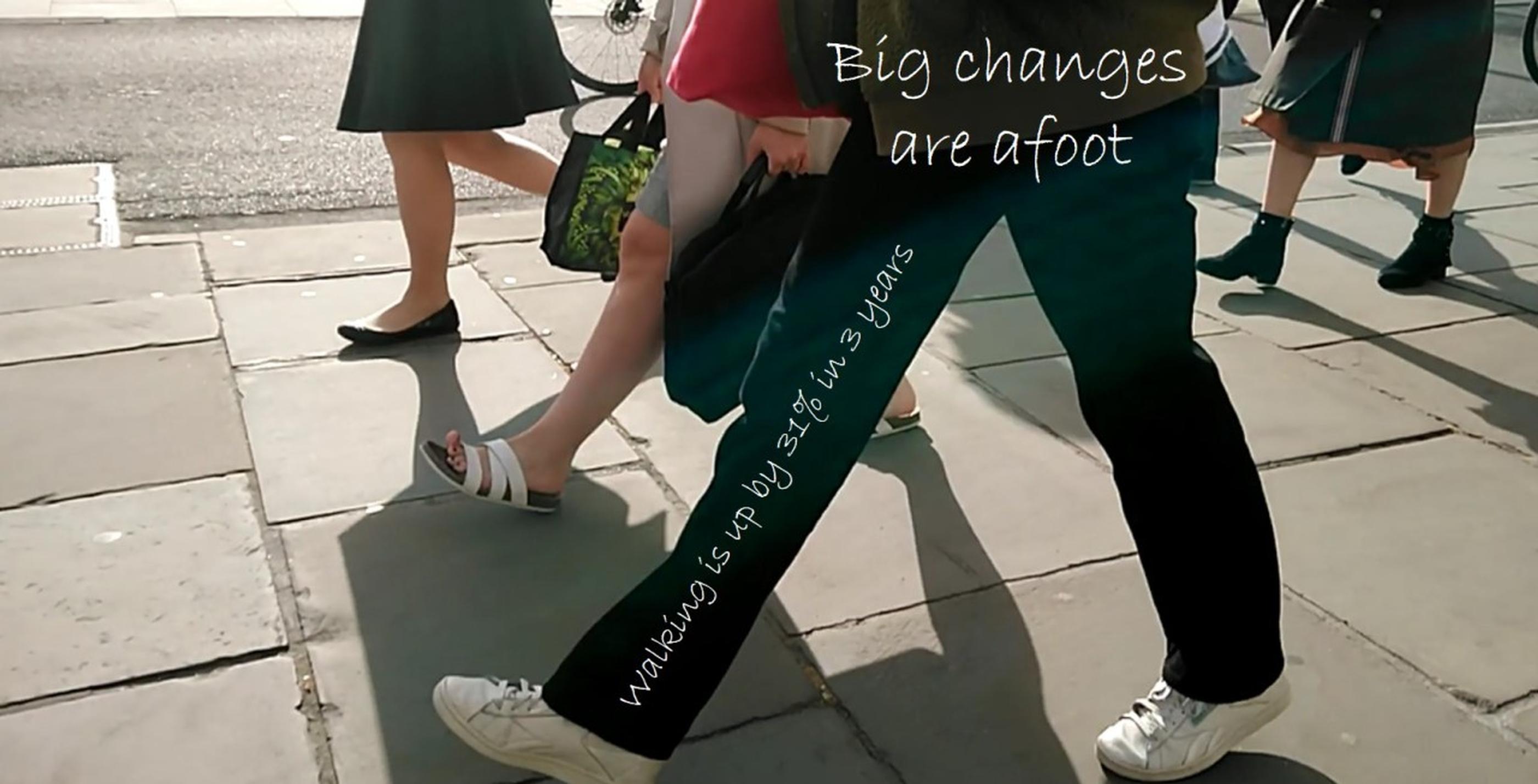 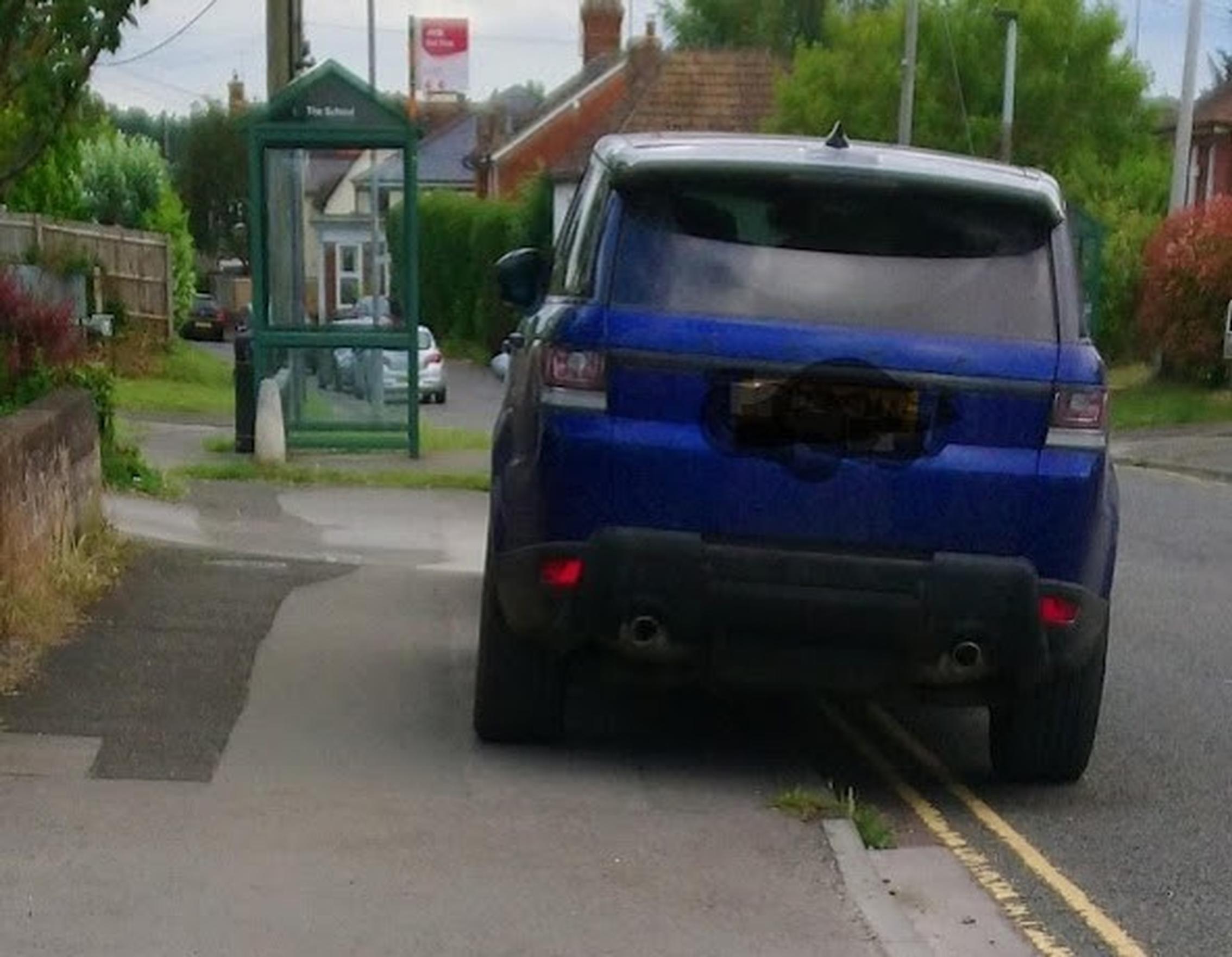 I want draw together what I see to be a deeply worrying picture in which the natural habitat of walkers and wheelers is under ever more threat from encroachment from another invasive species that is outgrowing its own habitat - the motor vehicle. We are not facing isolated incidents of legitimate pavement users being forced off the pavement and/or verbally abused, we seem to be facing an epidemic.

Social norms have become distorted so that some (many?) motorists have assumed a form of privilege that we also see with white people and with men - ignorant of the implicit (sense of) entitlement they enjoy and have grown to expect, at the expense of others. This comes at a cost to the walker and wheeler.

We are promised a world class walking network by 2040, so only 18 years to wait. Yet in the meantime, a secondary addiction to car dependence is seizing the nation - pavement dependence. Motor vehicles (or rather their users) just cannot help themselves (or authorities cannot help but help them or not stop them) when it comes to taking pavement space for their use. To pavement parking, we are now (it seems) set to add pavement charging. Frankly some pavements are now being treated more like service lanes for vehicles (and wheelie bins).

But there are signs of hope – the endangered species of walkers and wheelers were showing signs of recovery before the COVID-19 pandemic – in a three-year period, walking trips under one mile per person per year were up by 31%. And walking's popularity was shown during lockdown periods too. Many humans have been demonstrating their capacity and appetite for walking. We now need to boldly and imaginatively address our built environments to help active travel flourish - but time is of the essence.

Helloooooo…..consultation response, are you there?

Did you know that last month marked a year since the UK government’s consultation on options to tackle pavement parking closed? “We’re analysing your feedback” is still the message on the consultation web page.

What’s taking so long? Is it because there were so many responses? Is it because it’s such a difficult decision to make in terms of what to do? Or is it that walking and wheeling are low priorities in the scheme of things?

I appreciate that there are considerable practicalities implied with all three options. Yet this is from a current standpoint of an appalling situation (more below).

It is clear to me that it has to be option 3, as set out in my tweet response to the transport secretary on 31 August 2020.

“This option would establish a general rule against pavement parking except where there is specific permission for it. We propose this would mirror the London pavement prohibition; with exemptions in place at many locations.

“Motorists would benefit from a consistent rule: ‘you must not park on a pavement except where signs permit’. Traffic signs and bay markings would show drivers where pavement parking was still allowed.”

But it also goes on to outline all the challenges, starting with “a national pavement parking prohibition would be the most significant change to English parking law in several decades, and local authorities would need to undertake a substantial amount of work to prepare for it”.

While I’m still waiting for the consultation response, I went back to my own submission to the consultation to see what I said over a year ago. To the question: “How would you define an 'unnecessary obstruction of the pavement'?”

This is at the heart of it for me. It’s a trade-off where choice is involved. But not a very fair trade-off? I would compare it to being sat at the bar with my pint and then considering whether I should be allowed to drink half of the pint of the person sitting next to me as well, or whether I should stick to my own drink. I made this into a ‘transport joke’ I put together on LinkedIn back in October last year:

The ‘joke’ was widely appreciated.

This is an epidemic

An open letter from Living Streets to the Department for Transport (with several other organisations also as signatories) echoes the frustration of many: what happened to the consultation, where is the response and is this mounting misery for walkers and wheelers going to be brought to an end?

Let this sink in: 87% of parents have had to walk into the road because of pavement parking. This is not an isolated incident of inconsiderate parking here and there which happen to be captured and spun out over social media. This is an epidemic. An invasive species has dangerously encroached on the natural habitat of walkers and wheelers as I tweeted 18 months ago.

It is hard to be shocked by news these days about the world. But it is not so hard to be saddened on a daily basis by it. There were two incidents this week on social media. I am not going to name names in case those who provided these quotes do not want to be highlighted (though those concerned will recognise their words reading this). It reflects misogyny as well as abusive and harmful behaviour towards women from people behind the wheel of a vehicle:

Two isolated incidents? I doubt that very much indeed. In parallel let us remind ourselves of this: “A recent survey from UN Women UK reports that among women aged 18-24, 97 percent said they had been sexually harassed while 80% of women of all ages said they had experienced sexual harassment in public spaces”.

The article this quote comes from begins with “the safe spaces for women are shrinking”.

It seems as though some people become possessed once they are behind the wheel of their vehicle. They have an ignorance of other road users brought about by the sense of privilege that years of subservience to the car in our built environment design has created.

Yet while motorists cause misery to others with their pavement parking, it seems we are not to countenance causing any misery to motorists. Admittedly the context needs to be known for this quote from the UK Secretary of State for Transport but he said in a tweet a few days ago [emphasis added]: “Every motorway and major A road in the country is now covered by injunctions preventing people from blocking the road - anyone who causes misery to motorists may face prison. I'll continue to do all I can to protect road-users and prevent dangerous, disruptive behaviour.”

I have to ask then, will you be doing all you can Secretary of State to protect vulnerable road users from the dangerous and disruptive behaviour of some motorists? If I take this in good faith then I look forwards to the Government very soon announcing a nationwide ban on pavement parking in England.

Feast your eyes on the extract above from the July 2021 Transport Decarbonisation Plan from the Department for Transport.

What is to be made of these two seemingly encouraging pledges for walkers and wheelers? It appears that behaviour change is to run ahead of change to walkability and wheelability (in terms of change to built environment and social norms). The inference is that we have another 18 years to wait before we have world class cycling and walking provision.

We may have it selectively in some locations already but in many locations what we have is not world class, it is second class – subservient to motor vehicles. With such a pledge one might expect that we are set to hear good news from the pavement parking consultation with a nationwide ban that starts the process of putting the theory of the modal hierarchy into practice.

In the last 12 months of awaiting the pavement parking consultation results, the onward march of electrifying the vehicle fleet has continued and is intensifying. A key part of this is ensuring that suitable charging infrastructure is in place. Suitable, it may appear, for vehicles to be conveniently charged. And where might it be convenient to locate charging units as part of a move to also encourage more walking and cycling and to create world class provision for walkers and wheelers? Yes, you’ve guessed it, on the pavement.

The image of a pavement blocked by a charging point comes from a LinkedIn post last month. It remains to be seen whether this will be the exception or the rule as the network of charging points grows. Yet it’s a reminder once again that while in the pages of policy documents we can look forwards with hope to a modal hierarchy being applied, what we see on the ground can be very very different. Life for many walkers and wheelers is one of avoiding wheelie bins, parked cars, cracked pavement slabs and now charging units and charging cables. It feels more like walking or wheeling down a service lane than feeling like you are top of the modal hierarchy.

Pavement parking has been normalised to a frightening degree as we are now at risk of doing with pavement charging. Not only have we got a car dependent society but it would seem that the addiction is worsening (fuelled quite probably by growing sizes of vehicles making roads seem even narrower) – car dependence is leading to a secondary addiction: pavement dependence. We seem to have lost sight of (would be) walkers and wheelers being dependent on pavements to flourish. Just as we are seeing the demise of certain species of birds and animals as biodiversity shrinks in the face of human activity, we are at risk of seeing the demise of the walker and wheeler as species spotted in the build environment in the face of motorised traffic.

Two years ago I posted on LinkedIn daring to hope that we were facing a walking renaissance, having observed in National Travel Survey data that there had been, in England, a 31% increase in three years (2015-2018) in walking trips per person under 1 mile. Could it be that in spite of pavement parking harming their habitat, walkers were growing in number once again? Just as efforts were going into making sense of why this increase had occurred, the COVID-19 pandemic arrived sending longitudinal data into a frenzy. We know of course that during the starkly changed conditions for people during periods of lockdown, walking was in high demand.

So please, let’s not despair, but also please, let’s not be complacent. The walkers’ and wheelers’ habitat is under threat. I find myself thinking about COP26 and the commitment to stop deforestation – by 2030. We cannot wait eight more years before something is done to stamp out pavement parking and ‘kerb’ the use of pavements for recharging infrastructure. Time is of the essence. Many humans have been demonstrating their capacity and appetite for walking – we now need to boldly and imaginatively address our built environments to help active travel flourish.