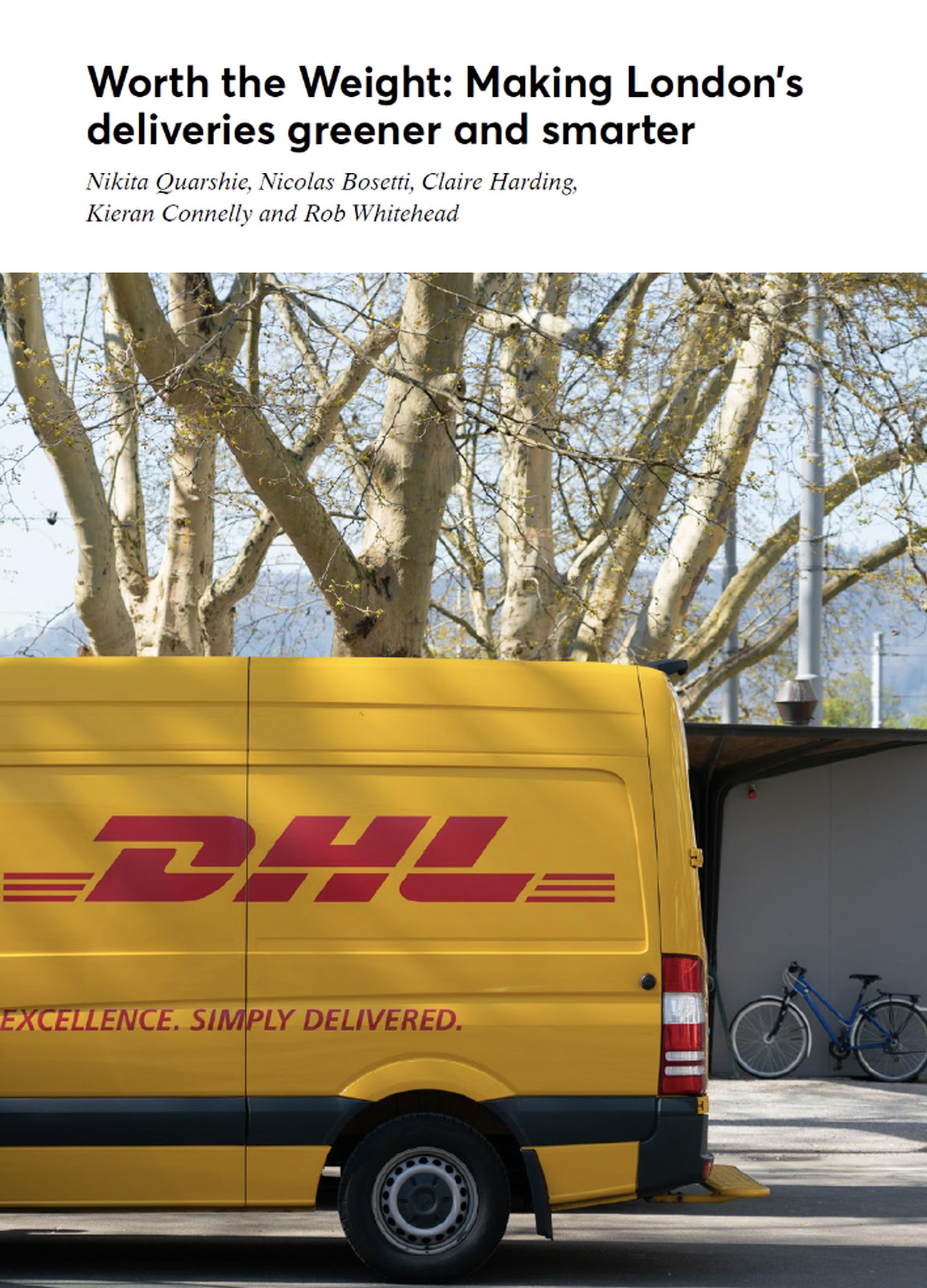 With the number of parcels delivered in London expected to double by 2030, a new report has set out an roadmap to make deliveries and freight journeys more sustainable and efficient.

The proposals include introducing 65,000 pick-up points and lockers for parcel deliveries, new mayoral powers to incentivise deliveries to pick-up points instead of homes, and prioritising delivery and servicing vehicles under a London-wide pay-per-mile road user charging scheme.

Published to coincide with the COP26 summit, the report by Centre for London highlights the environmental impact of existing delivery methods.

Most goods and services are moved by diesel and petrol vans which contribute up to a quarter of London’s carbon emissions and PM2.5 emissions from transport. Fuelled by the deliveries boom during the pandemic, diesel van sales in the UK were up 82% in the year to March 2021, while petrol van sales increased twofold over the same period.

The report, called Worth the Weight: Making London’s deliveries greener and smarter, argues that consumers need to change their behaviour, but also states that businesses, national and local government must also act to reform what is currently and unsustainable system by reducing the number of polluting van and lorry journeys at all stages of the delivery process.

Nicolas Bosetti, head of data and insight at Centre for London, said: “Delivery drivers and service workers need to be able to get from A to B as quickly and efficiently as possible. Londoners may like the convenience of doorstep deliveries but the way we currently move most of our goods comes at a high cost for our health, climate and for the businesses and workers who need to use our roads to get around.

“Many delivery companies already have plans to make their journeys more sustainable, but we need to encourage them to deliver to and from fewer places and support more of them to switch to cleaner vehicles. This means creating space for pick up points, consolidation centres and electric vehicle charging points. They won’t be able to do this alone. The Mayor of London and London’s boroughs need to take action to make freight journeys as green and clean as possible, alongside serious investment from the government too.”

The think-tank calls on the Mayor of London to work with parcel delivery companies to put 90% of Londoners within 250 metres of a universal parcel pick-up/drop-off point by 2025, equivalent to installing 65,000 in-store pick-up points or lockers across the city. Just 17% of parcels are delivered this way in London at present, despite pick-up options generally being cheaper than home deliveries.

The report suggests that introducing more of these pick-up points would allow companies to deliver large numbers of parcels at once to fewer locations, reducing vehicle traffic on the roads, and the knock-on-effect on air pollution and congestion. It would also mean that Londoners receive their parcels the first time they’re delivered: an estimated 60% of untimed home deliveries end in failure, and redeliveries increase van traffic on the roads.

The report also calls on the Mayor of London to do more to prioritise efficient and sustainable deliveries in the capital. It calls on the Mayor to introduce a pay-per-mile road user charging scheme that could give priority to delivery and servicing vehicles. This would help to cut congestion, save time and money for drivers and businesses, and reduce the number of private car trips.

The report’s authors – Nikita Quarshie, Nicolas Bosetti, Claire Harding, Kieran Connelly and Rob Whitehead –  welcome the recent extension to the Ultra Low Emission Zone (ULEZ), but highlight that many diesel and petrol vans are already compliant with the scheme standards so do not have to pay the fine.

Alongside the shift to electric vehicles, forecasts suggest that at least 4,000 rapid charging points will be needed in London by 2025, an 800% increase from the 500 in the city at the end of 2020. The report argues that national government should fund the installation of charging facilities at commercial properties such as consolidation centres.

The government should also invest in reactivating London’s piers, wharves and rail-road interchanges so that the river and railways are a viable alternative to van and lorry journeys on London’s roads.

The report highlights how a shortage of land available for logistics in central London can increase the distance that vans have to travel. It calls for the Mayor to work with local authorities to ensure space is available for logistics hubs where delivery companies can consolidate deliveries. London boroughs should also embrace dynamic kerb management to give delivery vehicles reliable access to space for loading and unloading, and avoid unnecessary additional driving.

Robin Woodbridge, head of capital deployment and leasing at Prologis UK, said: “With online sales unlikely to drop back to pre-covid levels, cities like London urgently need to find a solution to the last mile delivery problem and the challenge of balancing surging consumer demand for home deliveries with a need to improve air quality and reduce traffic noise and congestion.

“This important piece of research shines a light on the complex interdependencies at play when it comes to last mile delivery and proposes key recommendations for businesses, consumers and government to drive positive change.”

Neil Herron, chief executive of Grid Smarter Cities, said: “We welcome the timing of the report and the key Centre for London research finding that: ‘London boroughs and Transport for London should embrace dynamic kerb management, which would give delivery vehicles safer and more reliable access while minimising impacts on other road users.’

“At present, we have a unique opportunity to showcase London to the world with the implementation of a dynamic, bookable kerbside management solution that reduces congestion, improves air quality and enables businesses and communities to receive goods and services more efficiently. In 10 years’ time we will look back and say: ’Did we really allow delivery companies to fight for kerbspace on a first come first served basis, rather than booking delivery slots that guarantee access?’”

Kate Langford, programme director of Impact on Urban Health’s’ Health effects of air pollution’ programme, said: “There is substantial evidence that air pollution disproportionately affects the health of children, older people and people with heart and lung conditions. Air pollution also intersects with other systemic causes of ill health, like unemployment and noise pollution, and so has a disproportionate effect on people who live in lower income neighbourhoods. That’s why rising numbers of polluting vehicles and journeys in our capital is particularly concerning.

“We urgently need to design systems that manage the rise of deliveries and online shopping, and reduce vehicle traffic on the roads. Residents must be engaged in the design of these new systems, to make sure that they protect people’s health and work for everyone.”

Worth the Weight: Making London’s deliveries greener and smarter