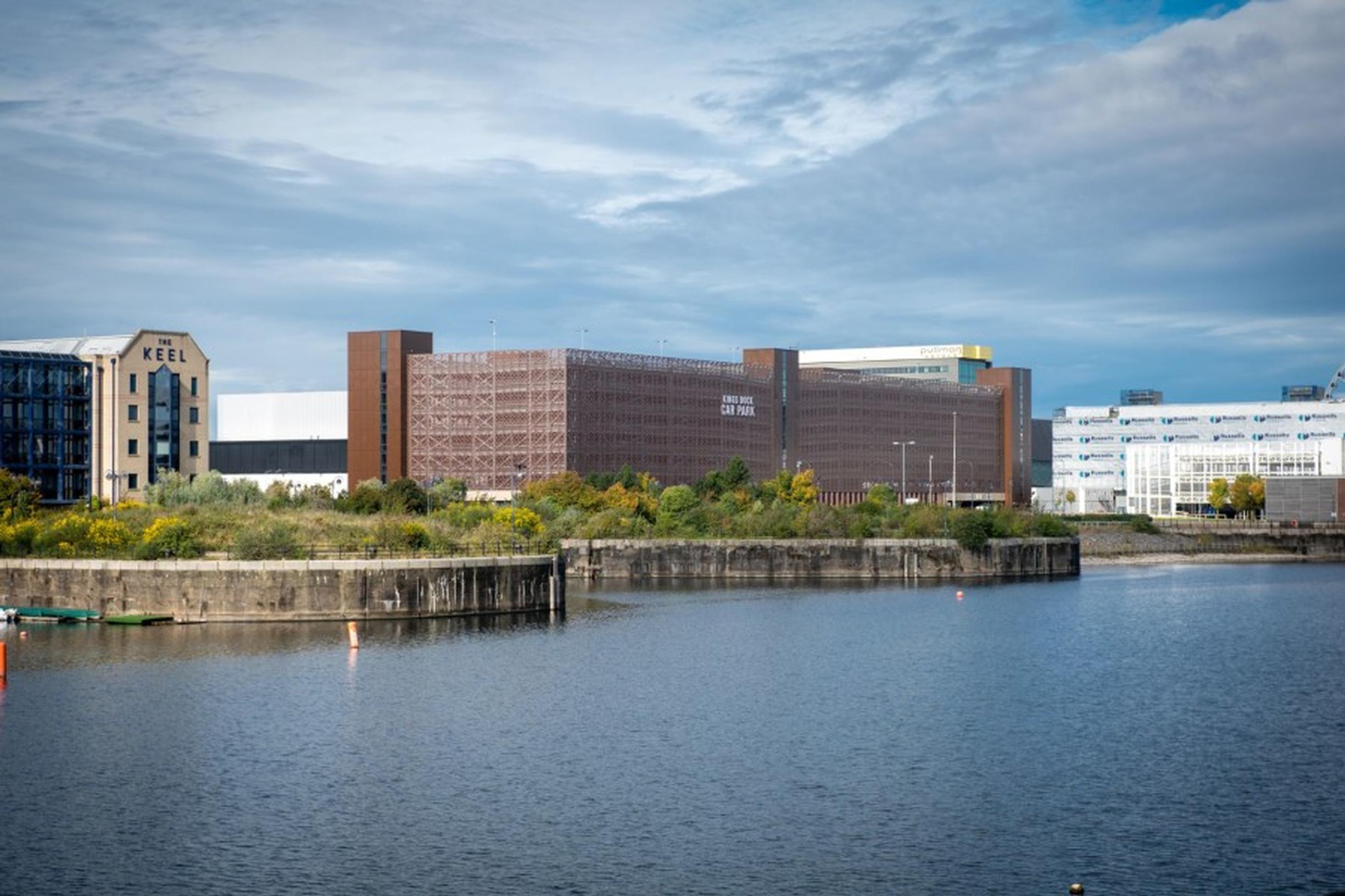 The multi-storey that will replace a Liverpool arena car park destroyed in a fire on New Year’s Eve in 2017 is set to reopen. The 1,450-space Kings Dock car park will serve visitors for events at the city’s arena, convention and exhibition centre.

The Kings Dock multi-storey replaces the Echo Arena car park, which was destroyed in a blaze that took hold on 31 December 2017. Over 1,000 vehicles were destroyed in the Echo Arena blaze. The vehicles mainly belonging to people attending a horse show taking place at the Liverpool Exhibition Centre.

The structural damage to the Echo Arena car park was so severe that it was demolished following investigations.

The new eight-floor Kings Dock car park has been built on Monarch’s Quay, which is adjacent to the exhibition centre.

Main contractor Willmott Dixon opted for a steel-frame structure, with metal decked floors and precast cores as it felt this was the most cost-effective method for the project.

The new multi-storey has been designed by Manchester-based Leach Rhodes Walker.

The facility features electric vehicle charging points and 50 cycle spaces. To ensure the site is secure it has CCTV throughout.

Given the fate of its predecessor, fire prevention was a key consideration, so Kings Dock features a sprinkler system.

Anthony Dillon, managing director of Willmott Dixon in the North, said: “From the moment we received the call from Liverpool City Council in the immediate aftermath of the fire, we’ve been committed to supporting the regeneration of Kings Dock, and we’re thrilled to be able to continue that work.

“In total, across the city of Liverpool, we have delivered more than £90m of community and regeneration projects, and have invested over £75m with local businesses. We are delighted to complete our latest project for Liverpool City Council and to be leaving a lasting positive legacy for the people of Merseyside.”

While the new Kings Dock car park was being built, the city council created a temporary multi-storey car park. The four-floor, 550-space car park opened on in December 2018, in time for the return of the Liverpool International Horse Show at the arena. It supported events at the city’s waterfront venues for the following 18 months.

The opening of Liverpool’s Kings Dock car park took a step closer with the completion of its striking internal and external signage.

Spelling out the arrival of a new car park

Merseyside company Widd Signs worked closely with the architects, Leach Rhodes Walker. Over a four-month period, which began in June, Widd Signs has designed, manufactured and installed a suite of internal wayfinding signage on each of the car park’s eight floors. It has also created the external signage that now runs across the outside of the building.

Phil Bamford, head of operations at Widd Signs, said: “As a local company, we’re delighted to have been able to play a part in the latest phase of the regeneration of Kings Dock. The new facility provides the waterfront with a car park fit for the future, and we’re proud to have our signage feature in a building that will be seen and used by so many.”

Andy Beale, construction manager at main contractor Willmott Dixon said: “Widd Signs worked with us through all stages of the process, from developing the design to installation. We are very happy with the end product.”

Ben Parllaku, project leader at Leach Rhodes Walker Architects, said: “The car park is looking great and so is the signage, which is bold, clean and eye-catching.”

Established in 1888, Widd Signs provides signage consultancy, design, and production to a range of high-profile businesses operating in the retail, construction and sports and leisure sectors. Its clients include retailers Marks & Spencer, Primark and Schuh, and culture and leisure hubs such as the National Science and Media Museum and Burnley FC.

Widd Signs completed the acquisition of Spectrum Sign & Display and its new 20,000 sq ft site in St Helens at the start of 2020 as part of expansion plans.

In May, the company launched a range of bespoke hygiene solutions to help retailers to navigate the COVID-19 pandemic, including antimicrobial acrylic protection screens, floor and wall graphics and hand-sanitising stations.