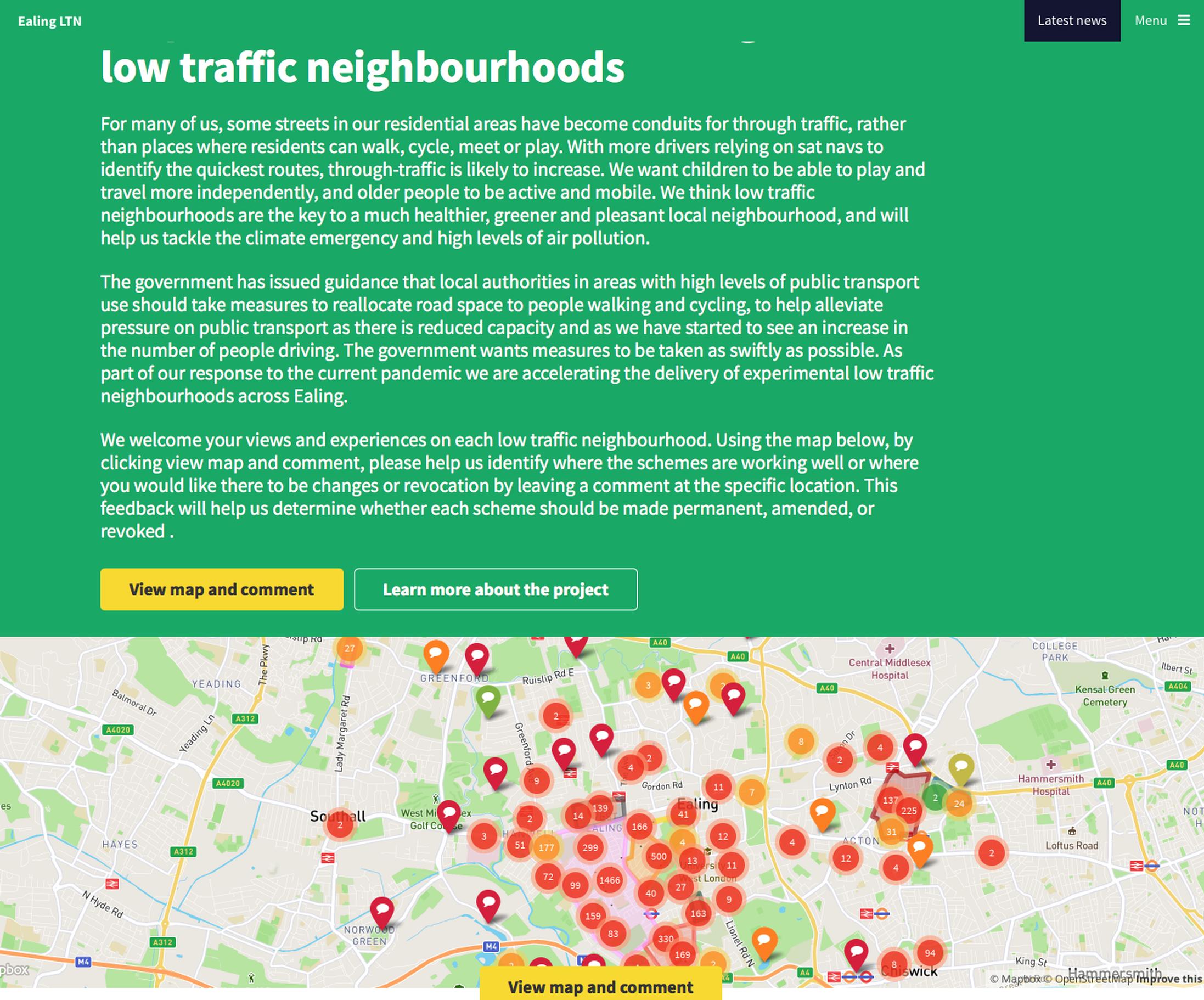 Data shows the majority of contraventions to date come from vehicles registered outside the borough.

The schemes are regulated by signage, bollards, planters (wooden boxes of plants and flowers at the end of a road that prevent through traffic) and, in some cases, CCTV. Camera enforcement locations were introduced following consultation with the emergency services.

No fixed penalty notices (FPN) have been issued in relation to contraventions of LTNs since they were implemented, but the council has been monitoring compliance at road closure locations without physical barriers using CCTV and has been issuing warning letters where appropriate.

From 7 December drivers who contravene LTN measures could face an FPN of £130 or £65 if paid within 14 days. A list of LTNs subject to enforcement rules can be viewed via the council’s website.

Full enforcement of will help the council collect the most accurate data on the trial schemes, which play a vital role in deciding the future of each LTN.

Ealing is one of a number of London boroughs currently trialling LTNs.  The government and Transport for London (TfL) funded schemes aim to reduce heavy traffic, create safer, quieter neighbourhoods and make it easier for people to walk and cycle, particularly at a time when COVID-19 restrictions mean it is harder to use public transport.

Each scheme is bespoke to its particular area and is experimental, pending feedback that will enable the council to take an informed view on whether to make each scheme permanent.

Local people are being encouraged to have their say on LTNs via the council’s Commonplace website. At the end of each scheme’s experimental period, feedback from residents and data from two assessments will be considered before a final decision on each LTN is made.

The council has introduced CCTV enforcement on South Parade in Chiswick near the junction with Fisher’s Lane, where new cycling measures have been introduced. This is to ensure drivers adhere to the restriction at the underpass at Fisher’s Lane that has been introduced to make it safer for cyclists. So far, the new scheme has led to around three times as many cyclists using Fisher’s Lane as part of their journey.

Cllr Jasbir Anand, cabinet member for environment and climate emergency said: “We need to ensure that LTNs are successful in reducing heavy traffic in quiet residential areas and with the majority of contraventions currently coming from outside Ealing, full enforcement of the trial schemes will help us do just that.

“We are also working to collect the most accurate data possible on the trial schemes, so fully enforcing them will help make this data far more reliable when we use it to help make a final decision about each LTN.

“We are fully aware that local people have strong opinions about LTNs, both for and against, which is why it is vital that everyone has their say - this feedback will be used to help shape the projects going forward.”

Commonplace online platform enables residents to have their say

Ealing Council has launched an online platform to help residents have their say on the borough’s trial low traffic neighbourhoods (LTNs). People living in trial scheme areas are encouraged to visit the council’s Commonplace website and get involved.

LTNs are a government initiative funded by Transport for London (TfL) and have been introduced in a number of boroughs across the capital.

The Commonplace platform gives full details of each LTN and the chance for residents to have their say on every aspect of the trial schemes. Comments can be made on the project in general, likes or dislikes about a specific trial schemes or views on a particular traffic measure or filter in a single LTN. Interactive maps allow people to look in detail at the layout of each LTN and zoom in to see its key features.

Dropped pins mark all comments and feedback given, with these forming an overview of people’s feedback on each trial scheme. All views are anonymous.

Each pin is colour-coded depending on the nature of feedback allowing the council and local people to view first-hand how the schemes are being perceived.

The launch of Commonplace in Ealing is part of the latest stage of an ongoing consultation process with local people to gather real-time feedback about trial LTNs in the borough. As part of this process, the council has confirmed that an interim assessment of each LTN will take place to understand whether any changes need to be made to improve the trial schemes and to ensure that feedback gathered in real-time is used to help shape the future of these projects.

Alongside feedback submitted by local people, data from traffic and local emergency services will be used to ascertain if and how the trial schemes can be improved. In some cases the council may be able to implement these changes for the remainder of the trials.

Before the end of each of the trials, people in each LTN will be encouraged to complete a survey in order that their views about the schemes can be gathered. At the same time, the council will also commission an independent organisation to carry out focus groups with residents and businesses in order to gather detailed feedback.

Each LTN will then be subject to a second, final assessment in the last month of the trial that will make a recommendation on whether to make it permanent. This second assessment will take into account additional data gathered over a longer period, including air quality and impact on local businesses, as well as the feedback from residents over the entire trial period.

Cllr Julian Bell, leader of Ealing Council said: “We have launched our new Commonplace platform to give residents further opportunities to have their say on LTNs and help shape these trial schemes in real-time. I encourage everyone to have their say. LTNs are designed as part of our response to the COVID-19 pandemic to alleviate pressure on our roads and public transport. They aim to create quieter, safer neighbourhoods for local people, promote cycling and walking as an alternative to short car journeys and help us improve air quality in the borough and tackle the climate emergency.

“It has always been intended to closely monitor trial LTNs and where necessary make significant changes should there be negative impacts on local people. Each one is different and bespoke to the particular area it is in and we need to allow time for the trials to play out and the measures to settle in. Traffic is a very fluid entity, meaning that impacts can change and vary week to week, as drivers adapt their journeys.

“We recognise that there are strong opinions on LTNs, both for and against and although they were rapidly introduced to meet government funding requirements, we are fully committed to hearing everyone’s views during the trials. This is why we have also launched an interim assessment of our trial LTNs which will allow us to evaluate the data available at this point and improve schemes where there are significant concerns. This will take place ahead of a second assessment at the end of each scheme and the final decision whether to make each trial scheme permanent.

“LTNs have been introduced as part of the council’s ongoing response to COVID-19 and the need for social distancing, as well as to help address the climate crisis. The COVID-19 pandemic has caused a dramatic reduction in public transport capacity, meaning the number of people turning to their cars to get around has increased. This combination risks making local streets busier, more polluted and less safe for our residents if we do not find alternatives.

“LTNs are designed to make it far easier for local people to walk and cycle, rather than use the car for short trips. They are being trialled in residential areas which are already either experiencing high levels of non-local traffic, including lorries and vans using these roads as short cuts, or are expected to see more traffic in the future.

“Being more active as part of our daily lives is the easiest way to get fitter and healthier and to reduce additional health risks.”

The assessment process and ETOs

Like other councils, Ealing uses Experimental Traffic Orders (ETOs) to implement LTNs, which require a seven-day period of notice before a trial scheme is introduced. A trial LTN is typically in place for six months, but is permitted to run for up to 18 months.

Should the interim assessment of a trial LTN lead to very significant changes being introduced then this may result in the ETO being cancelled and a new ETO being implemented. In this case the LTN would be stopped and a new trial scheme started, commencing with the confirmation of the ETO and running for another six-month trial period.

At the end of the 6-month period for each low traffic neighbourhood, a second formal, final assessment will take place and officers will look at all the available data and views gathered over a longer period, before delivering a report to cabinet for consideration on whether each scheme should  continue, be altered or stopped.

As each individual scheme started on different dates, they may not be considered all together but will go to the first appropriate cabinet meeting. Due to the postponed Mayoral and Greater London Assembly (GLA) elections, restrictions will affect when cabinet can consider these reports. It is expected that some reports will be considered after the elections.