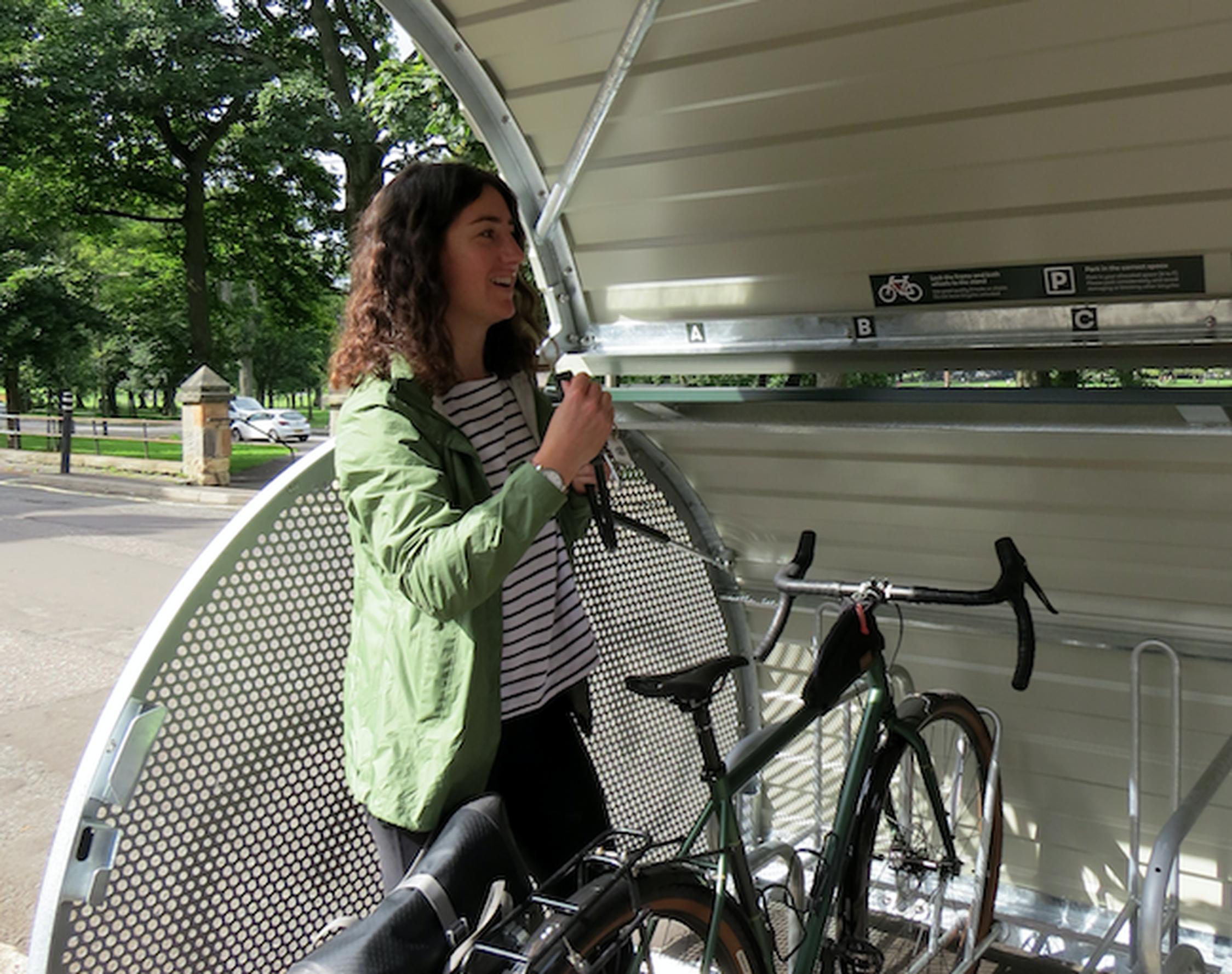 The City of Edinburgh Council is providing over 1,000 Bikehangar parking spaces for residents to store their bikes in partnership with Cyclehoop and Sustrans.

A consignment of 180 Bikehangars is being installed on residential streets where bicycle storage space is otherwise limited. The first of the two project phases is expected to conclude mid-October with close to 110 Bikehangars installed.

Upon completion, Edinburgh says it will have the largest network of on-street cycle sheds in the UK, outside of London.

Each Bikehangar provides six cycle parking spaces in half the space of a parked car, relieving pressure on roads and public transport networks and freeing up pavement space for physical distancing.

“Introducing secure bike parking will be particularly beneficial for Edinburgh’s tenement areas,” said transport and environment vice convener councillor Karen Doran. “It addresses the significant problem of limited space for bikes as more people choose cycling as their preferred way to get around the city. Overcrowded stairwells are not only inconvenient for residents, it makes them key targets for bike theft.”

Support for the Edinburgh scheme through public consultation has been high. Cllr  Doran said: “Over 70% of those who responded to our consultation strongly supported the scheme, so it’s fantastic to now see Bikehangars being installed in many locations across the capital. Working with Cyclehoop means we now have accessible, well-maintained, safe places to store bikes for only £6 a month.

“We would like to see this scheme extended to other areas in the future, providing more support for the increasing numbers of residents we’re seeing who choose to cycle and helping us meet our longer-term goal of being a carbon neutral city.”

Joseph Taylor, senior project officer of Sustrans and City of Edinburgh Council, said public consultation showed that the provision of Bikehangars in Edinburgh is likely to increase bicycle ownership.

Taylor said: “20% of people who responded didn’t own a bicycle, but of those, 43% of said access to secure cycle storage would encourage them to own a bicycle in the future.”

Tierney Lovell, Sustrans infrastructure manager, added: “Providing secure, well-located cycle parking is essential to encourage more people across the capital to cycle around the city for everyday journeys and exercise.”

Residents can apply for a space through the Cyclehoop Rentals website for a small monthly fee, which covers the management and maintenance of the units.
High demand is expected in Edinburgh, meaning the council expects to roll out further cycle sheds in the future. Residents can suggest new locations for Bikehangars on the Cyclehoop Rentals website and this data could be used to inform council plans.”

“We designed the Bikehangar to help those who aren’t able to keep their bicycles at home, to store them accessibly on the street, safely locked and protected from the weather.”

Cyclehoop has partnered with Scottish cycling charity Bike For Good to carry out maintenance of the units. The company will also provide five free Dr Bike sessions annually.

In London, Bikehangars are in high demand and local authorities cannot keep up with requirements. Lau said: “Over 14,000 Bikehangar spaces have been provided in London but the waitlist is over 35,000 and still growing. People want to cycle but an incredible number have no garage or home storage space.”