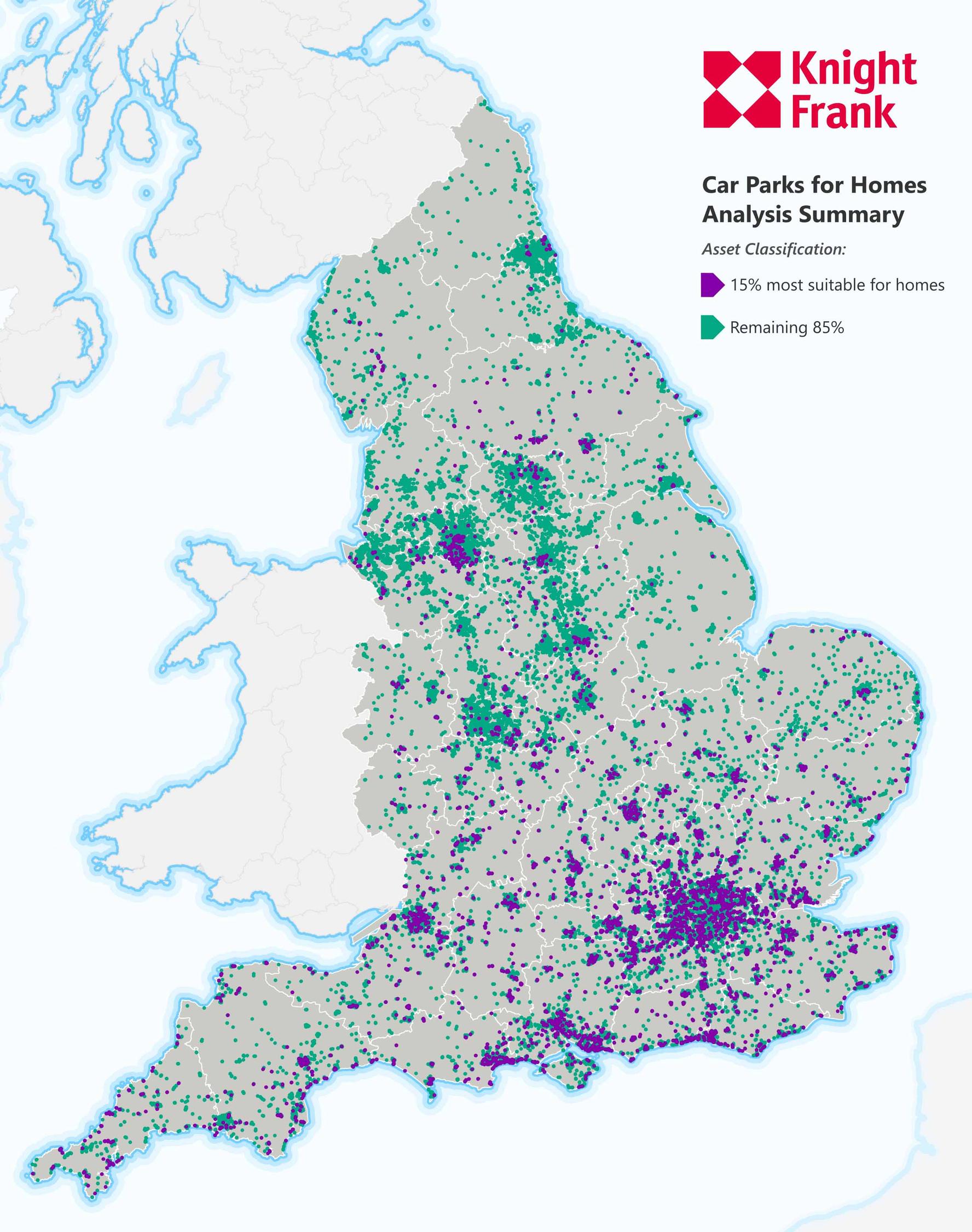 Just over 240,000 net additional dwellings were added to housing stock in England in 2018/19, 20% below the government’s stated 300,000 per annum housing target. Freeing up underutilised public-sector-owned land in the right locations could hold the key to boosting future housing delivery numbers.

A good place to start could be looking at the extensive amount of potential development land tied up across England’s car parks, according to the results of a study by Knight Frank’s Geospatial team, conducted on behalf of the Ministry for Housing, Communities and Local Government (MHCLG).

In total, the study identified 103,000 public and private surface car parks across the country, which comprises a land area of 20,000 hectares. Of this, some 7,555 hectares are owned by the public sector. Our estimates suggest that this alone could yield 2.1 million homes, or seven years’ supply of housing at the government’s stated 300,000 homes per annum target.

Of course, not all of these are suitable for development, and many provide essential support to associated retail centres. However, as Ian McGuinness, head of geospatial at Knight Frank and author of the study notes, by mapping the precise location and extent of every surface car park in England in public ownership, it is clear that there are redundancies in provision as well as opportunities for re-use.

We can now say, for example, that 91% of public sector surface car parks actually have another such car park within a 5-minute walk. That 21% offer parking for a primary retail centre, 13% only offer provision for secondary retail, and that the remaining 66% do not appear to support any retail centre whatsoever. Crucially, this means that there is scope to release land for new homes, whilst maintaining car parking services which are vital to support our high streets.

Taking this into account, and selecting just 15% of public sector-owned car parks best situated for housing (in areas with already high public transport connectivity), Knight Frank has identified the potential to deliver more than 110,000 new homes.

Ian McGuinness says: “The figures shine a light on the sheer scale of opportunity to deliver much needed housing on government-owned land and come as many local authorities face increasing pressure to meet ambitious housing targets. On top of helping to boost new supply, this approach would raise important revenue for the Treasury. We estimate that the sale of these sites could raise £6 billion in land sales, at a time when public finances are likely to come under greater scrutiny and pressure.”

There are suggestions that the government recognises the opportunity. The MHCLG has announced that it planned to look at how the land it owns can be used more effectively, including assessing if it could be released and put to better use, including for home building. For example, the study found:

In London, despite extensive rail connectivity, 40% of the city’s surface car parking is held by the public sector, and 270 hectares of that is in areas with existing public transport connectivity of PTAL Level 3 or above (PTAL is a measure of transport accessibility, the higher the score, the better the connectivity).

Delivering housing on the country’s underused car parks also has the potential to drive environmental and social benefits. As Ian McGuinness says: “Some 76% of respondents to the National Travel Attitudes Survey agree we should reduce car use for the sake of the environment, whilst the pace of development of autonomous vehicles means we should already be thinking about the scale, location and utility of space currently tied up with privately owned vehicles. One ReThinkX study estimates personal car ownership could drop as much as 80% over as little as 15 years.”

The opportunity for developers more broadly is also significant; 65,000 car parks identified through this research fall under private ownership, providing opportunities up and down the country to bring forward suitable sites for housing and other uses. Stuart Baillie, head of planning at Knight Frank, adds: “Delivering housing on the country’s underused car parks will also drive environmental and social benefits. Given the need for housing and the pressure on our green spaces and conservation assets, looking at how we can make use of ‘brownfield’ and underutilised land is vital.”

Oliver Knight is a partner in Knight Frank’s residential research department, specialising in UK-wide development research. He is responsible for analysing and reporting on trends in the residential development, land and new homes markets across the UK, as well as within the build-to-rent, student housing and senior living sectors. He also contributes to Knight Frank’s housing market forecasts and regularly presents Knight Frank’s market views to clients including developers, property companies, investors and lenders.
www.knightfrank.co.uk