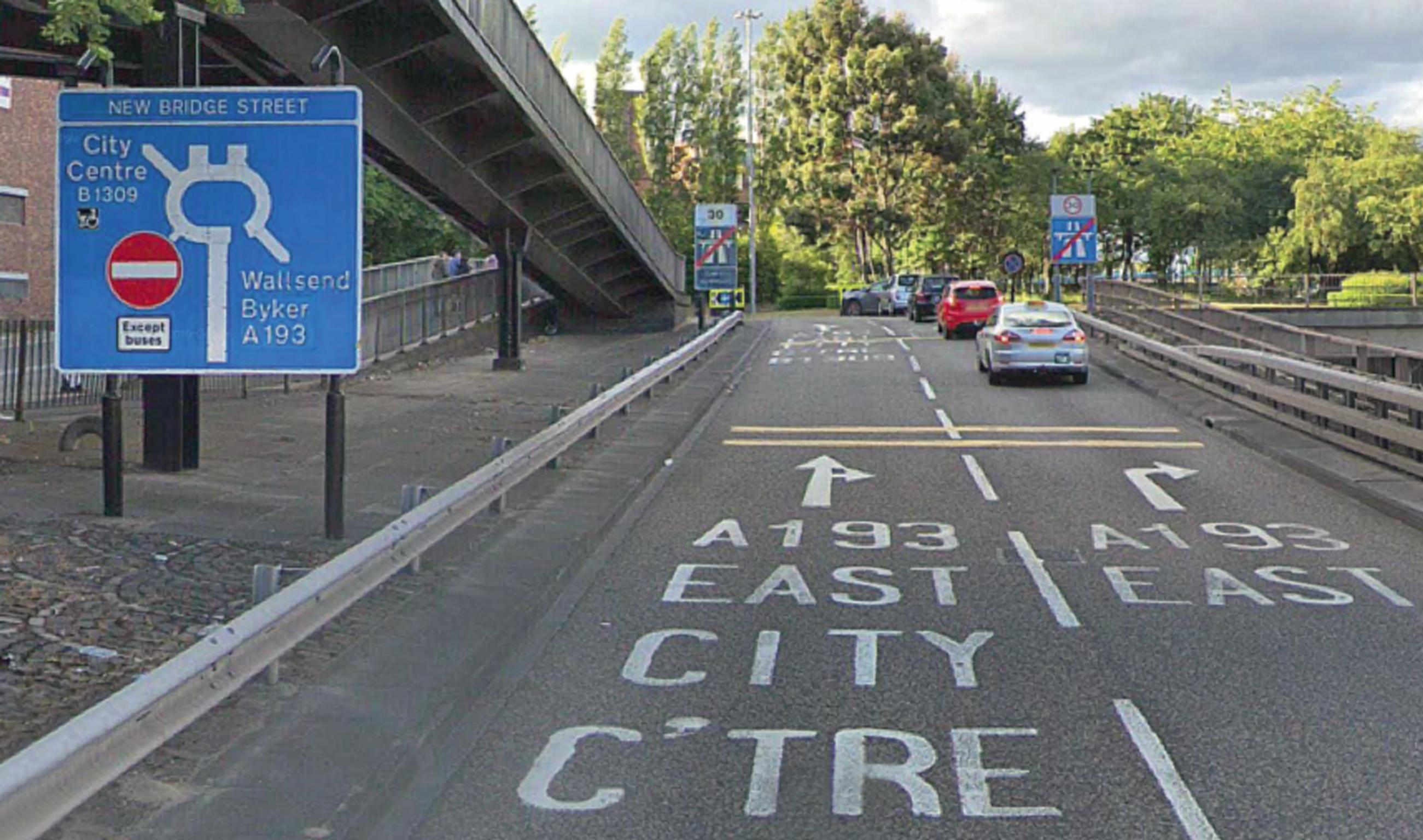 Warning signage for a bus lane in Newcastle city centre has been labelled “misleading” and “wrong” by Caroline Sheppard, chief adjudicator of the Traffic Penalty Tribunal. Sheppard carried out a review of cases relating to the John Dobson Street bus gate, which has been operation since 2016. It is understood that up to 92,000 motorists were issued penalty charge notices (PCNs) for driving down the section bus lane covered by the contested signage during 2016 and 2017.

In creating the bus gate, Newcastle City Council (NCC) essentially created a ‘no through road’ by restricting 70 metres at the most northerly part of the street to buses, taxis, cycles and other authorised vehicles. Sheppard wrote: “The bus lane referred to in the PCNs is what traffic engineers call a ‘bus only street’ or ‘two-way bus gate”. A significant number of PCNs have been issued since to the owners of unauthorised vehicles that have travelled through the bus gate.”

Complaints about bus gate signs have been at the heart of a number of appeals to the Traffic Penalty Tribunal by motorists. Following a site visit and the hearing of 10 consolidated appeals concerning PCNs issued for alleged contraventions of the bus gate restriction, adjudicator Paul Pearson allowed seven appeals relating to the northbound carriageway of the bus lane, but dismissed those relating to the southbound carriageway.

Newcastle City Council then applied for a review of the adjudicator’s decision in respect of five of the seven allowed northbound appeals. The city council’s application was made under Regulation 23(1) of the Bus Lane Contraventions (Penalty Charges, Adjudication and Enforcement) (England) Regulations 2005, which provides that an adjudicator may, on the application of a party, review and revoke or vary any decision to reject a notice of appeal or to dismiss or allow an appeal upon a number of grounds. Ground (f) provides that a review may be conducted if it is in the interests of justice.

The council said it considered adjudicator Pearson’s decisions to be inconsistent with his earlier decisions relating to the John Dobson Street bus gate. In particular, the city believed adjudicator Pearson did not explain in his written judgment that he had determined earlier appeals relating to the John Dobson Street restriction and had dismissed them. NCC argued that this omission amounted to procedural unfairness.

The council also argued that adjudicator Pearson did not properly consider the judgment of Beatson J in Oxfordshire County Council v The Bus Lane Adjudicator [2010] EWHC 894 (Admin); that the decision has inconsistencies within in itself; and because of the perceived inconsistency and the publicity concerning the enforcement of this restriction, motorists are likely to be confused, and that NCC itself does not know whether or not to introduce new signs.

Chief adjudicator Sheppard refuted NCC’s argument that adjudicator Pearson had been inconsistent in his decisions. She said that, in some of cases, the old sign on the approach to the roundabout off the A167(M) – indicating ‘City Centre B1309’ – actually misdirected drivers to the John Dobson Street bus gate.

The chief adjudicator wrote: “I am bound to express dismay that a sign directing vehicles to the city centre through John Dobson Street should have been left in place at a principal junction and not have been replaced. That neglect alone is grounds for showing that NCC had not brought the bus gate restricting access to the city centre to the attention of road users.”

When considering the original cases, adjudicator Pearson had confirmed that the signs at the beginning of the bus gate restriction comply with the signs regulations. However, having reviewed the cases, the adjudicator stated that the advanced signs between the A167(M) and the bus gate needed to be improved in order to direct motorists to their intended destination, thus avoiding the restriction. With improved signage, particularly on the approach to the roundabout off the A167(M), fewer motorists would unexpectedly encounter the bus gate.

It was materially important, Sheppard wrote, that the appellants were from outside Newcastle and, therefore, some followed the sign to ‘City Centre B1309’ off the A167(M), even though the city centre ceased to be accessible from the B1309 after the John Dobson Street bus gate restriction was put in place. This sign also displayed the Shopmobility icon from when these services at Eldon Garden Shopping Centre could be reached by this route.

Chief adjudicator Sheppard stated: “It is significant that all the appellants in these five cases did not reside in Newcastle (although some live nearby) and some said they had not been in the city since the restriction was put in place. This was the common fact to these appeals.”

The chief adjudicator pointed out, notwithstanding the fact that the John Dobson Street bus gate prevents access to the city centre, or anywhere else, the B1309 had not been de-classified, and, therefore, the signs created the false impression that it led to another A road.

The chief adjudicator also decided that the advance warning sign in John Dobson Street itself was placed so that it could be frequently obscured by buses. The sign is misleading, insofar that it implies the left turns before the bus gate show Northumberland Road and Ridley Place are through roads, which they are not.

Sheppard said: “The adjudicator described the advance direction sign as ‘vague’. In my view it is, in fact misleading and wrong. Both the turnings to the left are shown by a line with a chevron point at the end, indicating a through road.”

In support of its application, NCC produced two videos filmed from the dashboard of a car driving along John Dobson Street and through the restriction. The chief adjudicator used images from the videos to illustrate the problems drivers faced seeing and complying with the signage. “I am grateful for this helpful evidence of the route from the perspective of a driver,” she wrote.

Sheppard rejected Newcastle City Council’s contention that adjudicator Pearson’s decision in five appeals was inconsistent with his decision on the first wave of appeals. “I agree with Newcastle City Council that motorists are likely to be confused, not because of potential inconsistency, but because of signing, conflicting directional advice and lack of information,” she wrote.

“In their submission, NCC says itself that it does not know whether to introduce new signs. The adjudicator’s decision could not have provided a clearer description of the signing problem. It is not for adjudicators to tell a council how to design and sign a traffic scheme. The authority is obliged not just to sign the restriction itself, but when a new scheme is introduced to sign directions for the alternative route. Where this is successfully achieved, it is unlikely to give rise to appeals such as these.”

The Traffic Penalty Tribunal’s chief adjudicator has criticised signing used to alert driver to bus gate restrictions in Newcastle. Newcastle City Council has not yet decided on whether the council will appeal to the High Court for a judicial review, nor what changes will be made to the bus lane now, or whether or not drivers who were fined for using the bus lane previously will be refunded. The total value of the 91,806 charges is estimated to be between £2.7m and £5m. The penalty for driving in a bus lane is £60 but can be reduced to £30 if paid within 14 days.

Cllr Arlene Ainsley, cabinet member for transport and air quality, said the Labour-controlled council would refute any suggestion that it has been negligent or has misled drivers in any way, particularly as the measures we put in place were compliant with the government guidelines. Cllr Ainsley said the council would talk with the Department for Transport before making any further announcements.

Cllr Anita Lower, Liberal Democrat chair of the council’s overview and scrutiny committee, wanted to have clarity on the potential cost of resolving the dispute. She said: “This long-running issue has been a hot spot for chaos and confusion, and key questions remain: how much will this debacle have cost the council by the time it is over?”

The Lib Dems, who are the main opposition, said the council should commit to implementing all lessons learnt from the review. They have also called for Cllr Ainsley to resign. Lib Dem leader Cllr Nick Cott said: “It is disappointing to see that the council wants to pass the buck on this long-running saga. Learning lessons requires accepting responsibility. Cllr Ainsley says that further information will be provided in a shorter timescale than it has taken the Tribunal to find against the council: with the track record of delays at Blue House roundabout, Killingworth Road, and other schemes, we won’t hold our breath. An impartial inquiry is the way to go.”